Some strange goings on have been happening today. Things such as walking past an aisle in a shop and something flying off the shelf without anyone there. Another strange thing has been this: 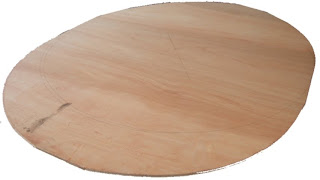 The egg(ish) shaped layout works out at 4ft x 3ft

It may not be what you expected (or I!), but this is the start of the construction of Calshot -MkII.

It's a kind of egg-shaped layout (I like to be different, and it shows!) but I'm yet to decided what will go where yet, although I do have a vague idea. 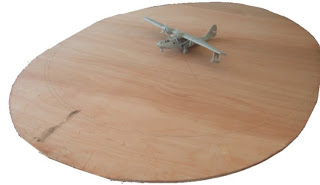 This Catalina should give a sense of scale

To be honest, I was fed up of all this planning malarkey so I decided to risk it and ask dad to cut out a bit of 9mm ply with a rough sketch of a shape I thought up last night (!). The old layout is being dismantled, the pelmet and backscene are already off, as is half of the beach as I tried to carry the whole thing downstairs on my own (all 6ft of it).

If anyone has a bright idea, let me know as it may influence my design.

. Layout curtain with Velcro for ease of fastening

. NO polyfilla, DAS clay will be used instead

And one bizarre one.. (still in the idea stage)

. Temporary backscene that can be moved round to a different part of the layout for a different view.

If anyone would like my initial ideas for the layout I'll try and put a sketch up. I'm hoping the baseboard will be built in one week.