Books are good, but there are some things you only notice in real railway environments. Here's a selection of detail shots from my recent quick visit to Didcot. I know that preservation isn't the same as the actual railways, but there are still things to learn from and be inspired by, I think. 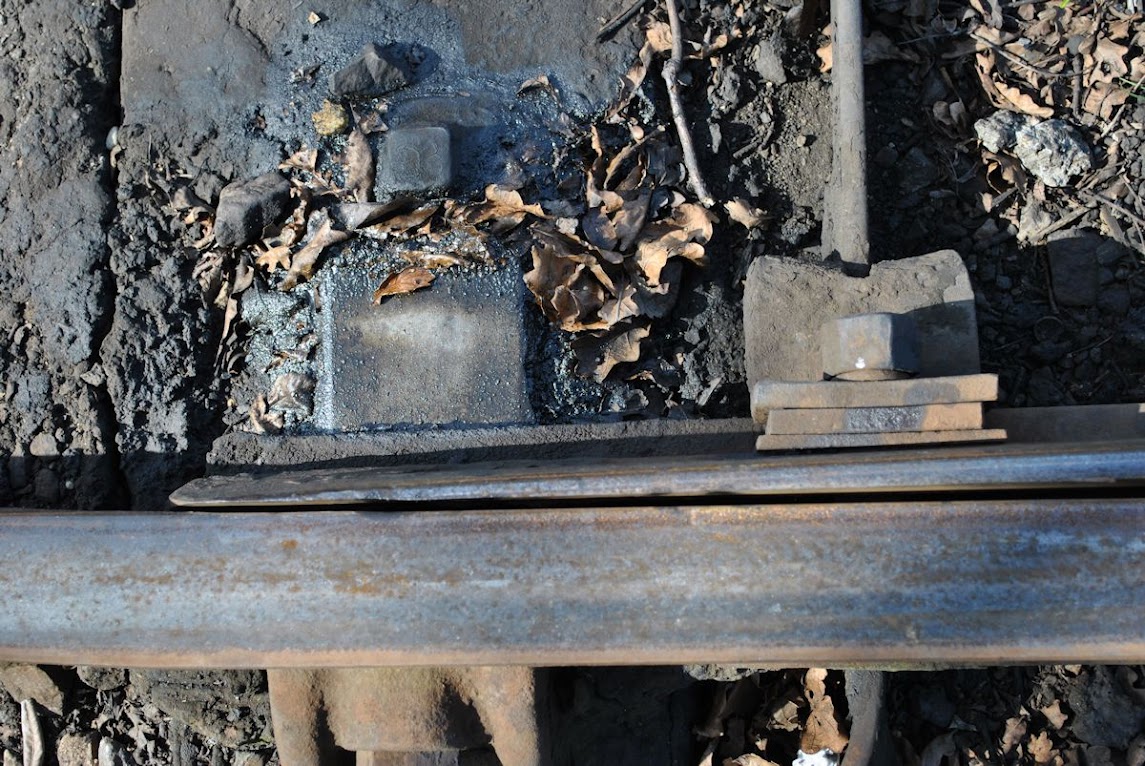 Lubricated points... I don't recall seeing that modelled, but maybe I haven't looked hard enough. It would be easy to replicate, but would it look odd in model form? 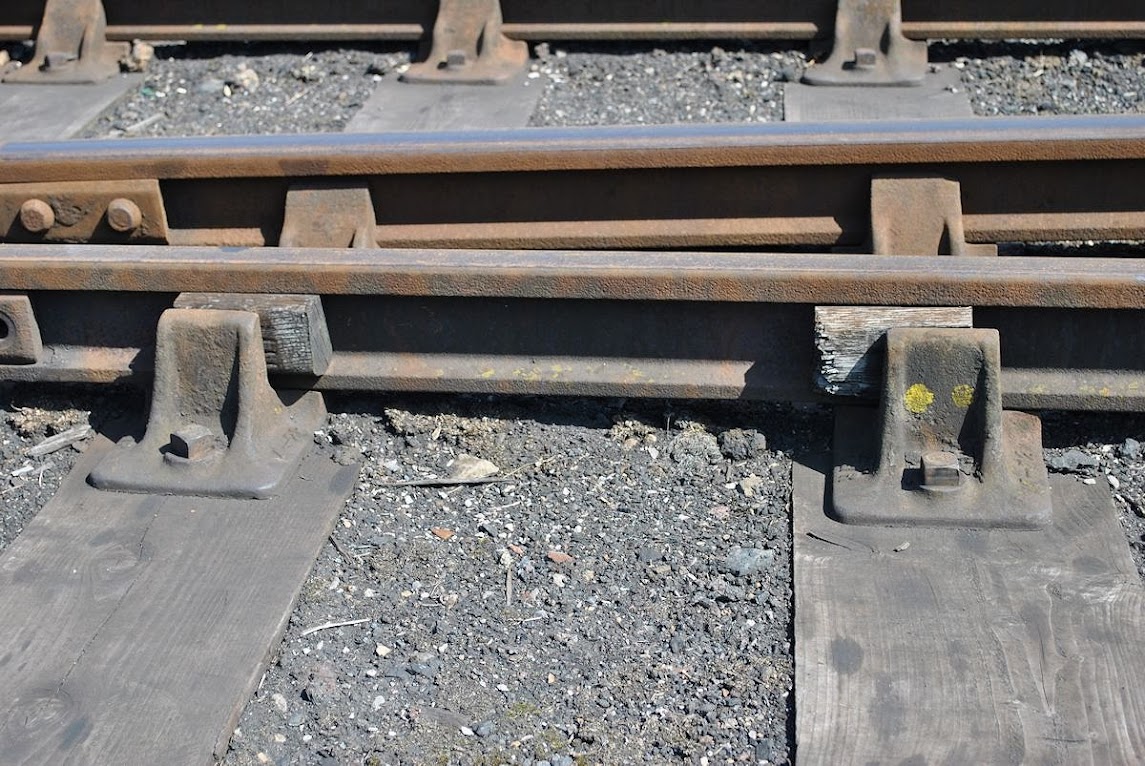 Track keys. First time I've had a chance to study them in close-up since I began dabbling in hand-built track. Before that I was happily indifferent to this sort of thing! 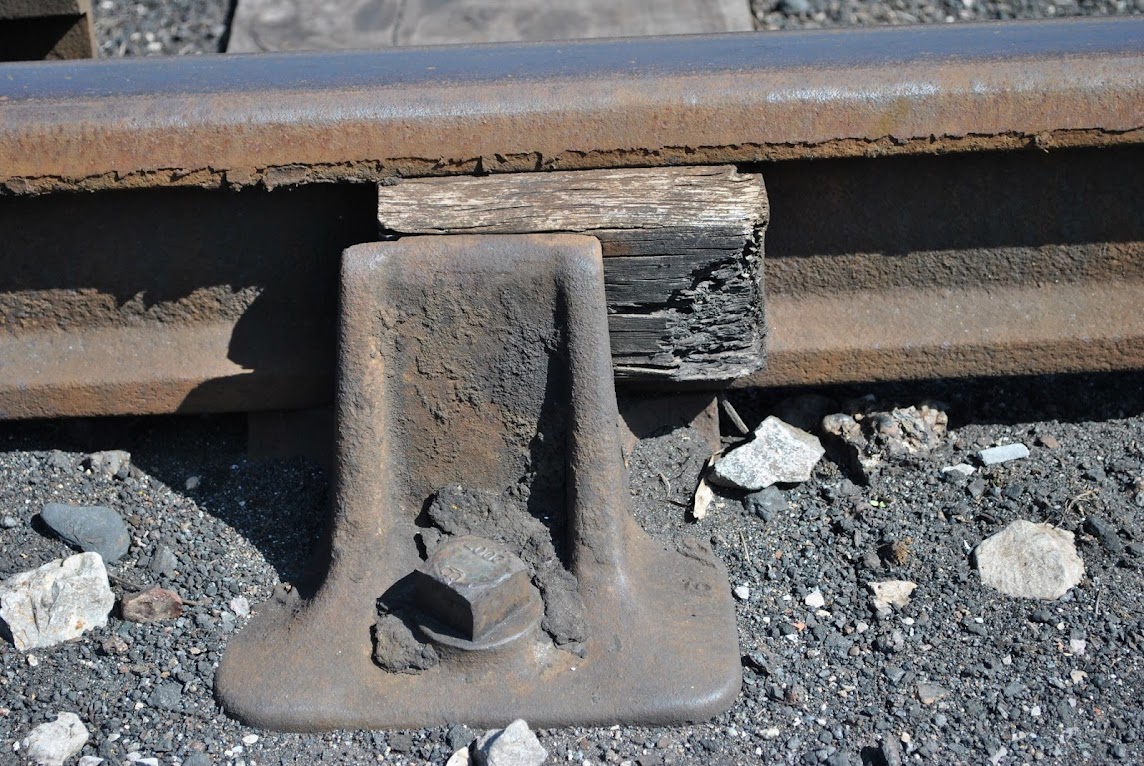 I wonder just how perfectionist gangers were back in the day. Was a rotting key like this commonplace, or would it have been replaced before it got to this condition? 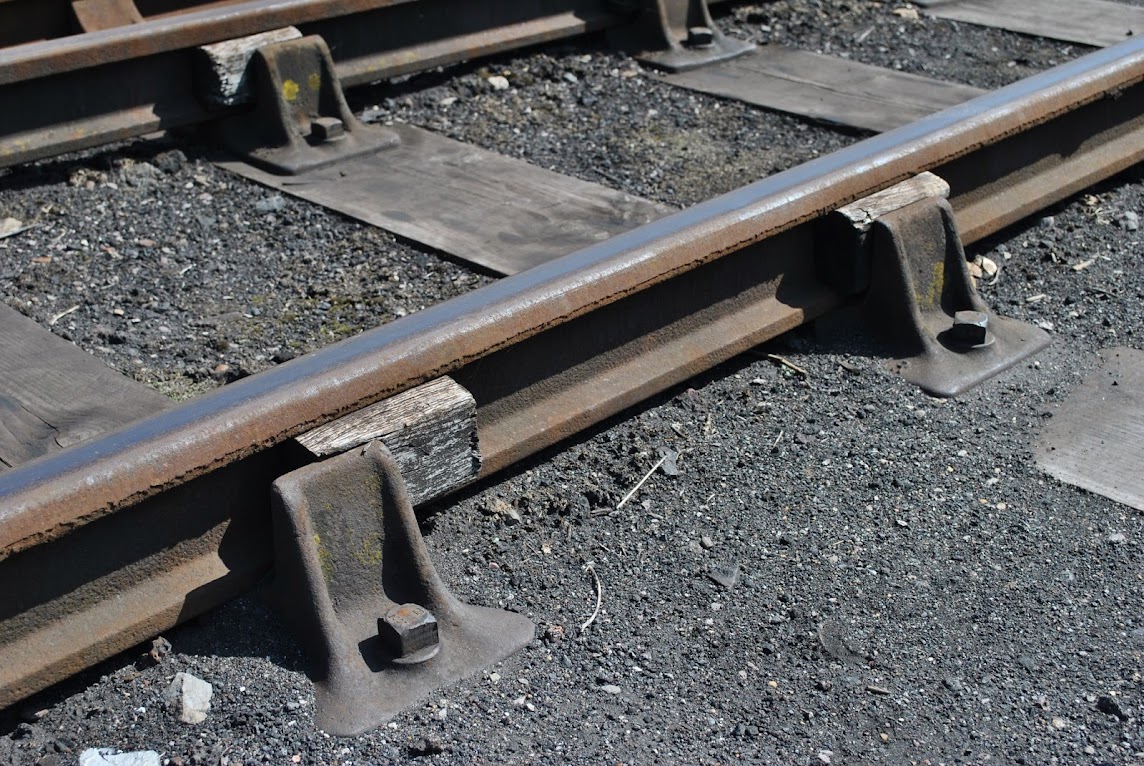 The key on the right is centered, thus breaking the right/left pattern. Maybe to make up for rail creep? 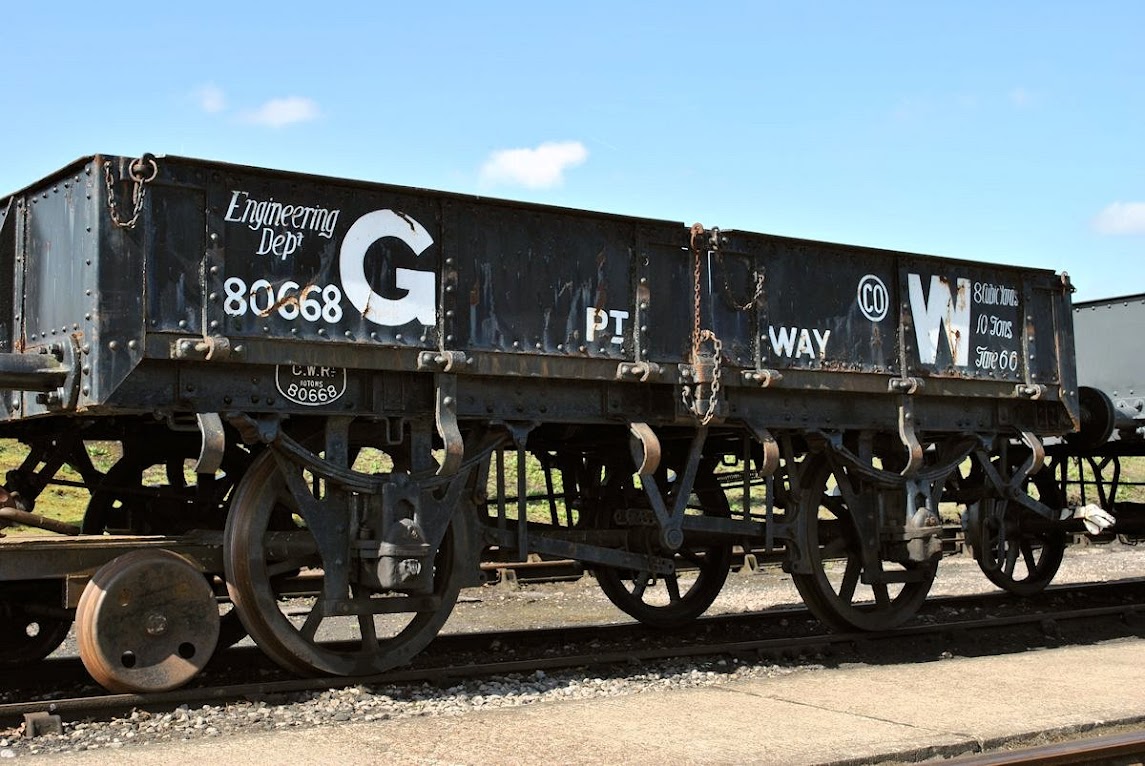 A ballast wagon to dia P15 of 1936. I see Cambrian have a kit for it. A couple of these would make a nice little project in case I decide to do a 1940s shunting layout at some point. 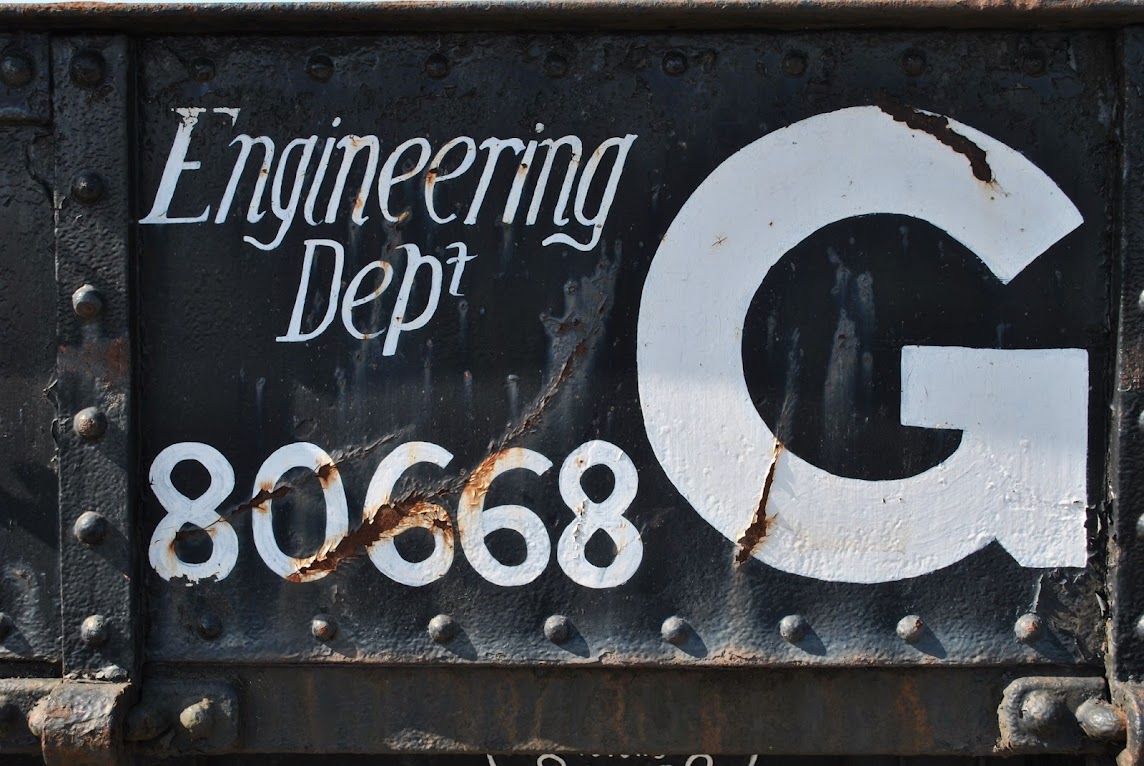 Peeling paint, but of a very subtle kind. How to model that? Slice up the paintwork with a scalpel, maybe? Then again, that sounds like something that could go awfully wrong! 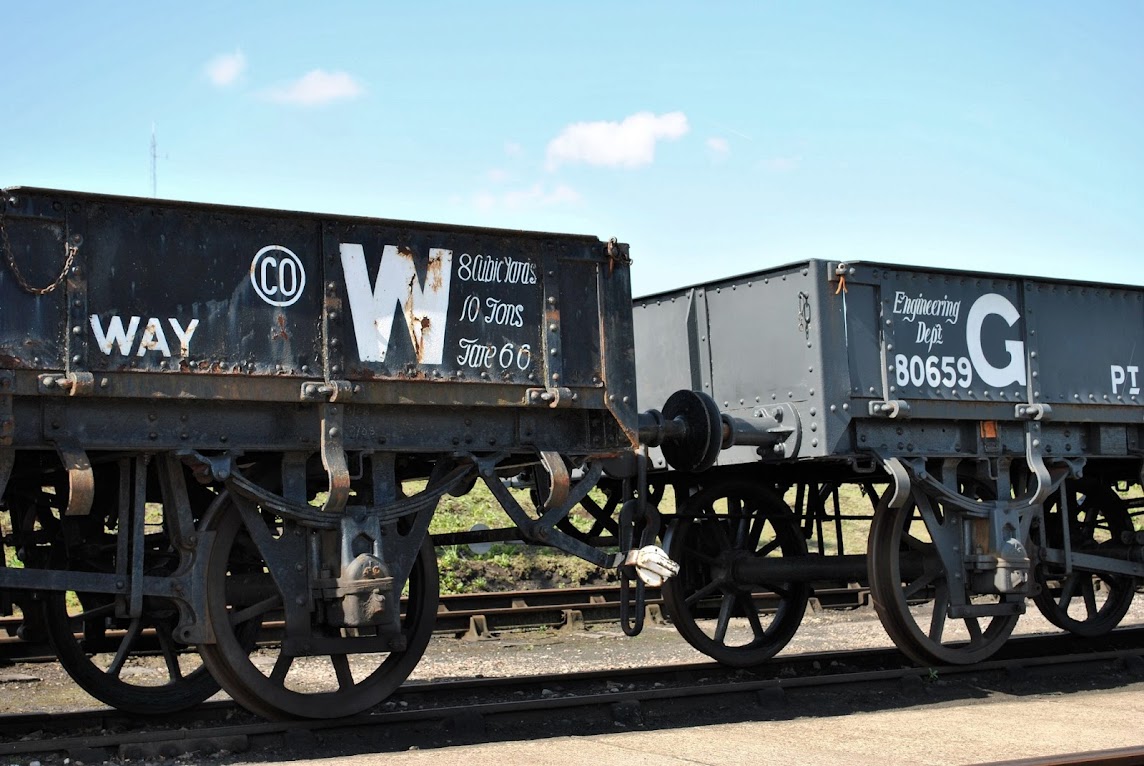 Can of worms! Two P15s in different liveries. My knowledge of GWR PW stock liveries is very sketchy. As far as I remember, there is a debate about black vs dark grey, but the details evade me. I remember reading a piece about this on-line recently, but can't for the life of me find it now. Can anyone help? 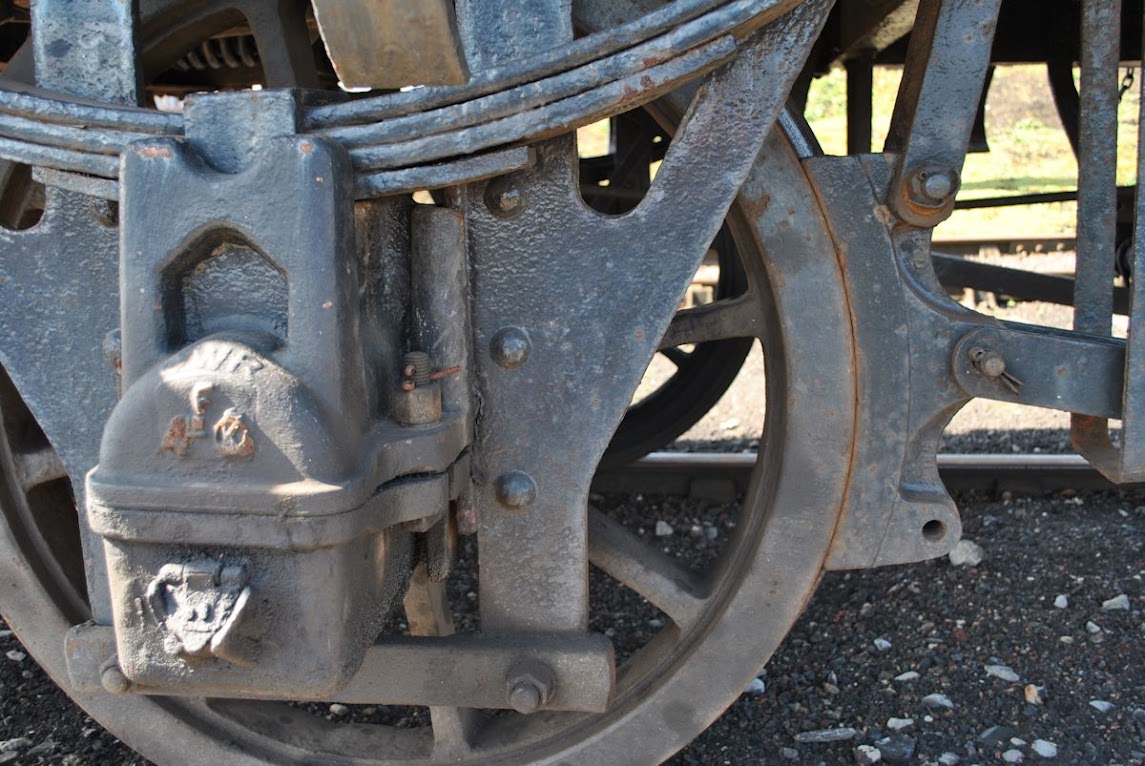 We never get to model wagons that are actually braked. Would be nice to do one in model form. A small removable diorama at the end of a siding with a wagon being unloaded. And the brakes on! 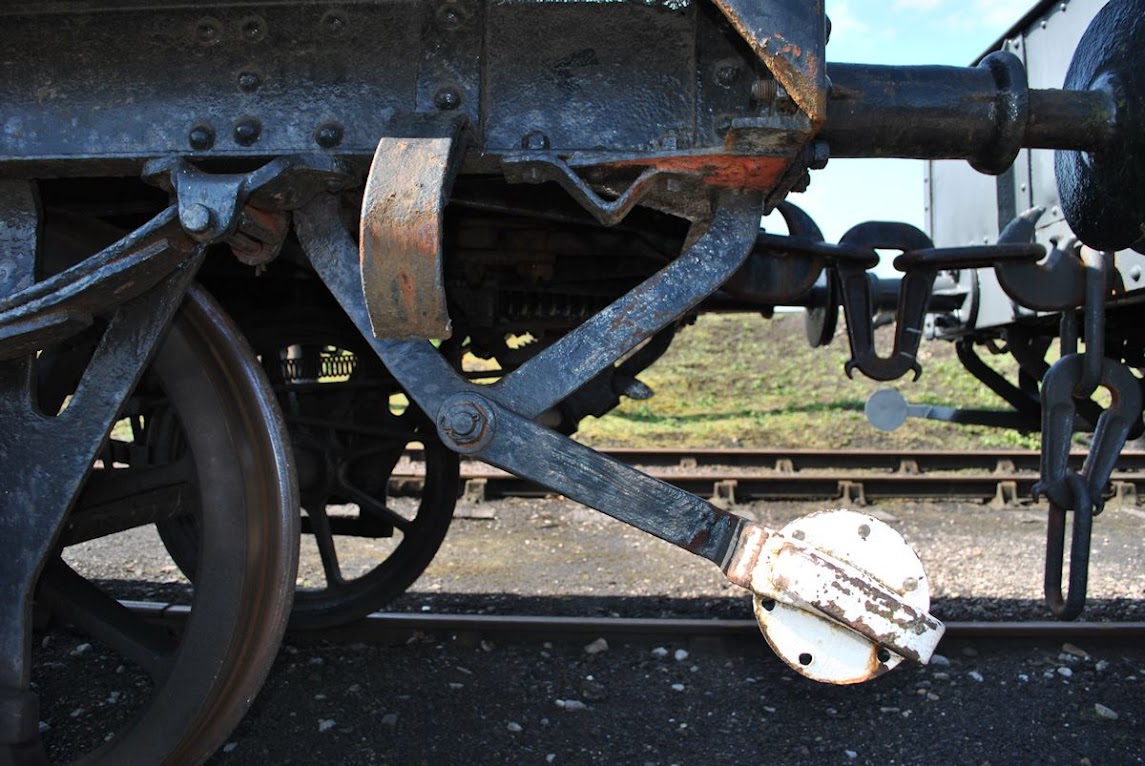 Close up of the DC3 (I think?) hand brake. Jim Champ has done a nice intro on GWR brake types 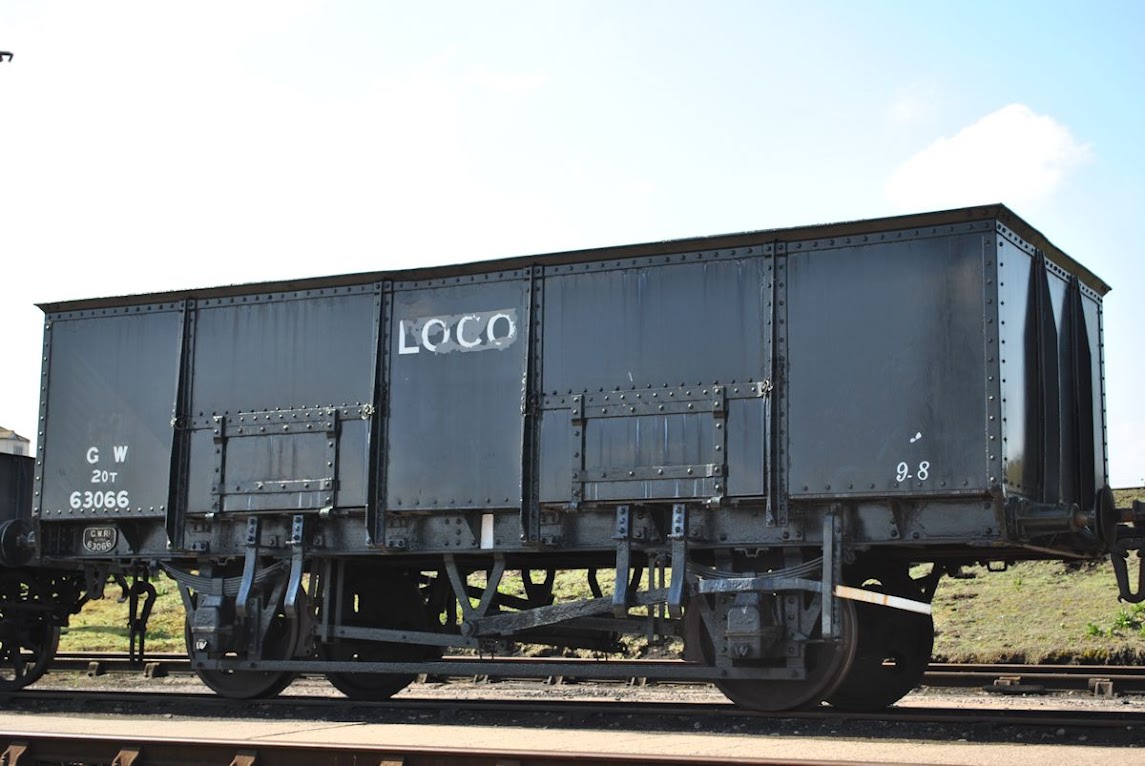 Loco Coal to dia N34 of 1946. Another interesting wagon to model, I think. Either scratchbuilt or a modified version of the (incorrect) Dapol Loco Coal. 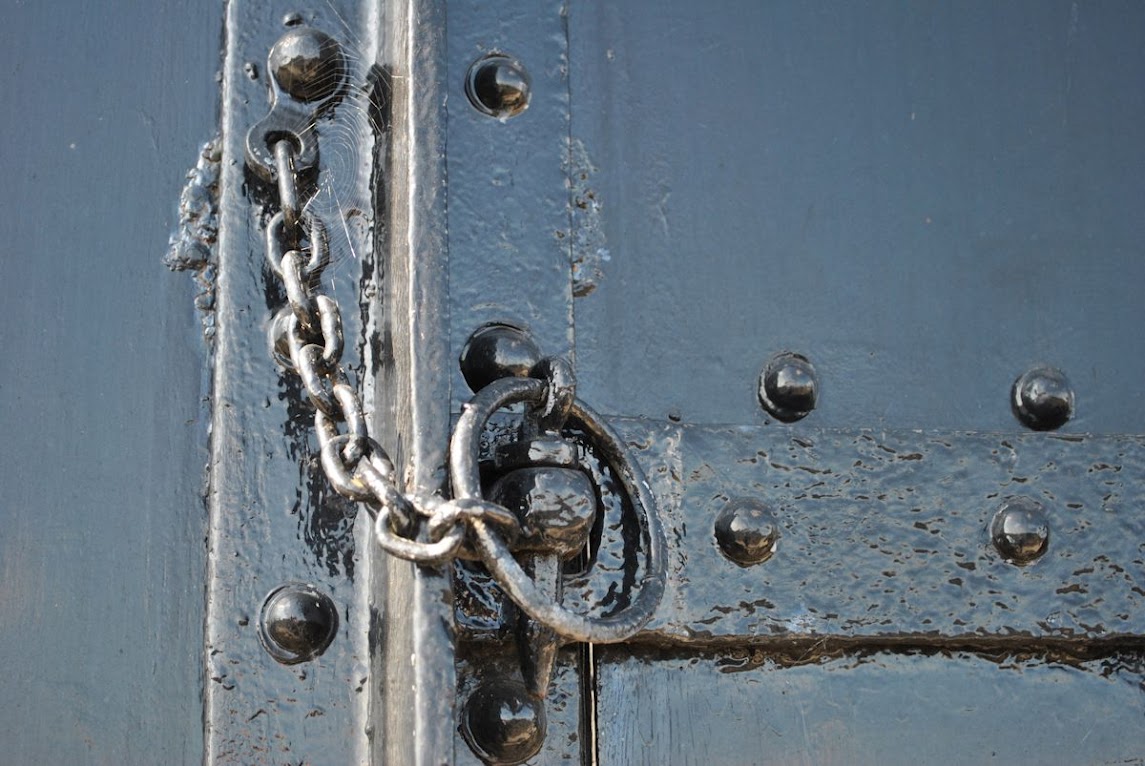 Note the cobweb here on the N34. Now that would be a modelling challenge :-) Strings of glue maybe? Problem is, once you go down that route, everything about the wagon has to be the same level of detail! 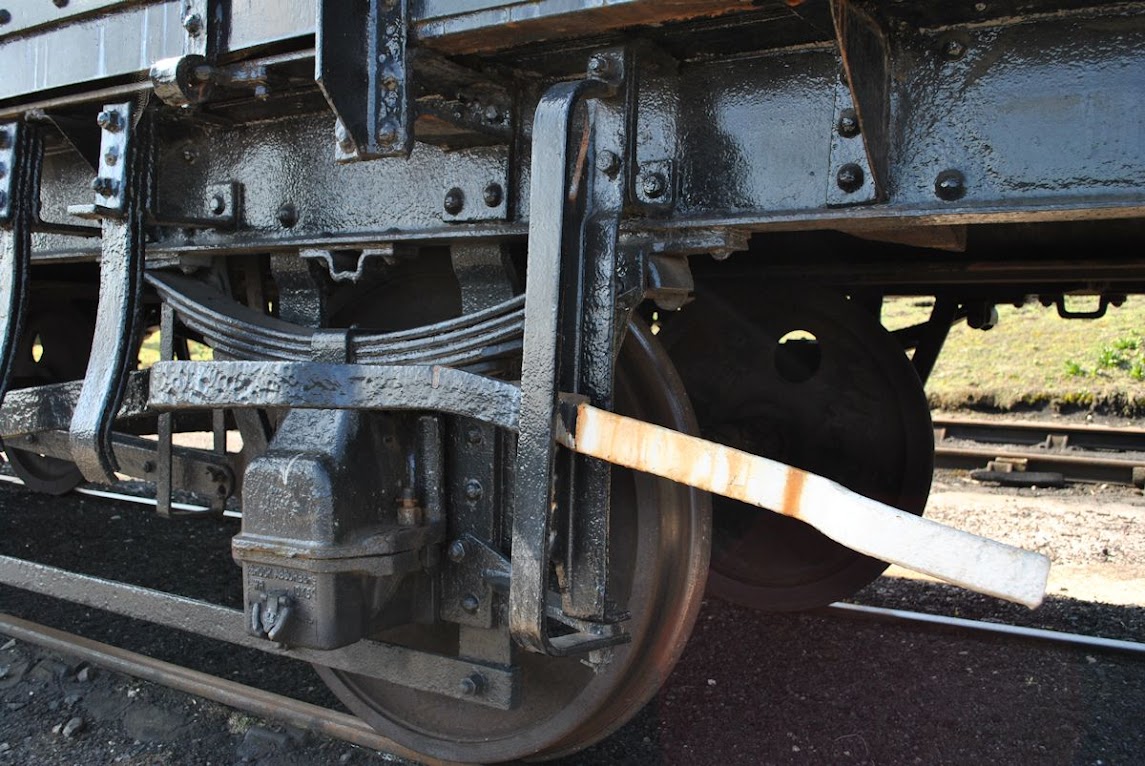 Morton handbrake lever on the N34. Note weathering on the brake lever. 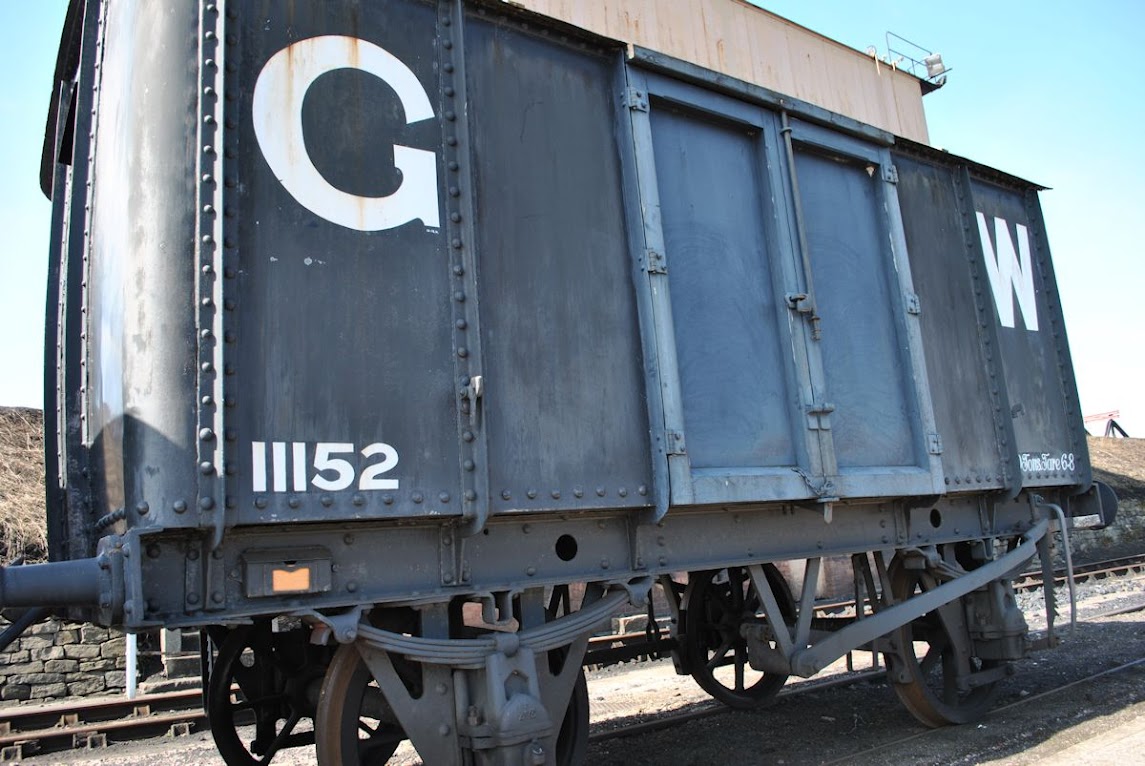 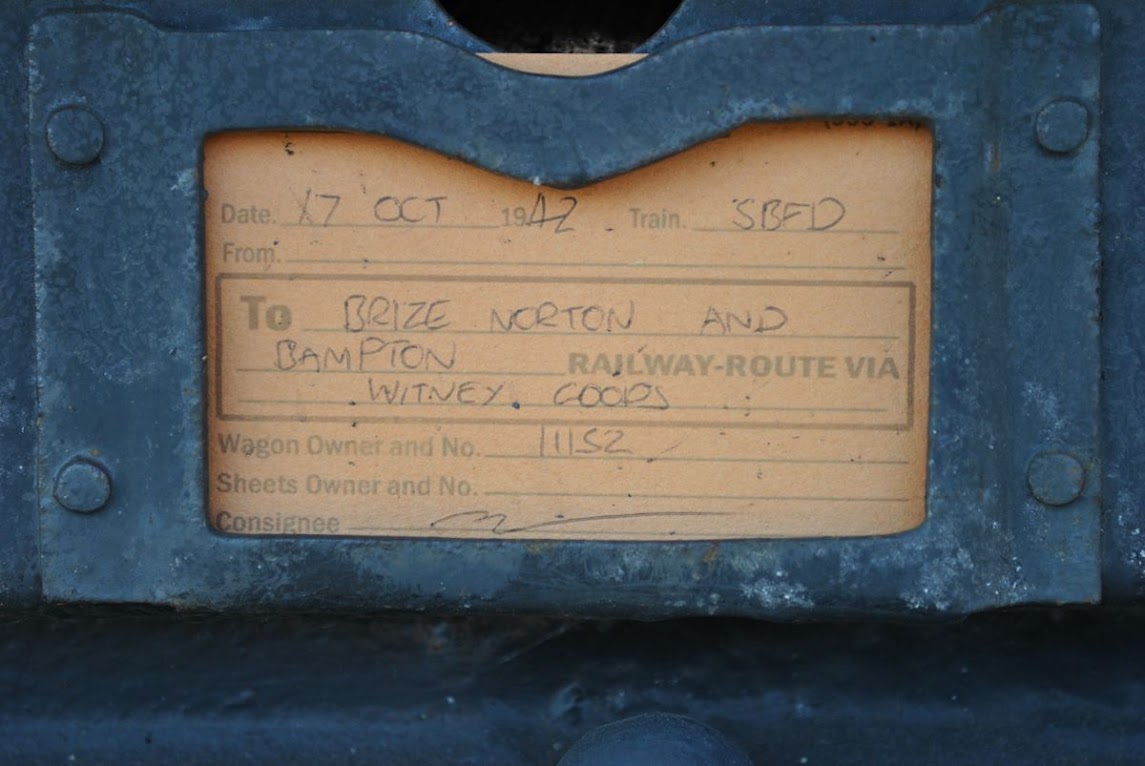 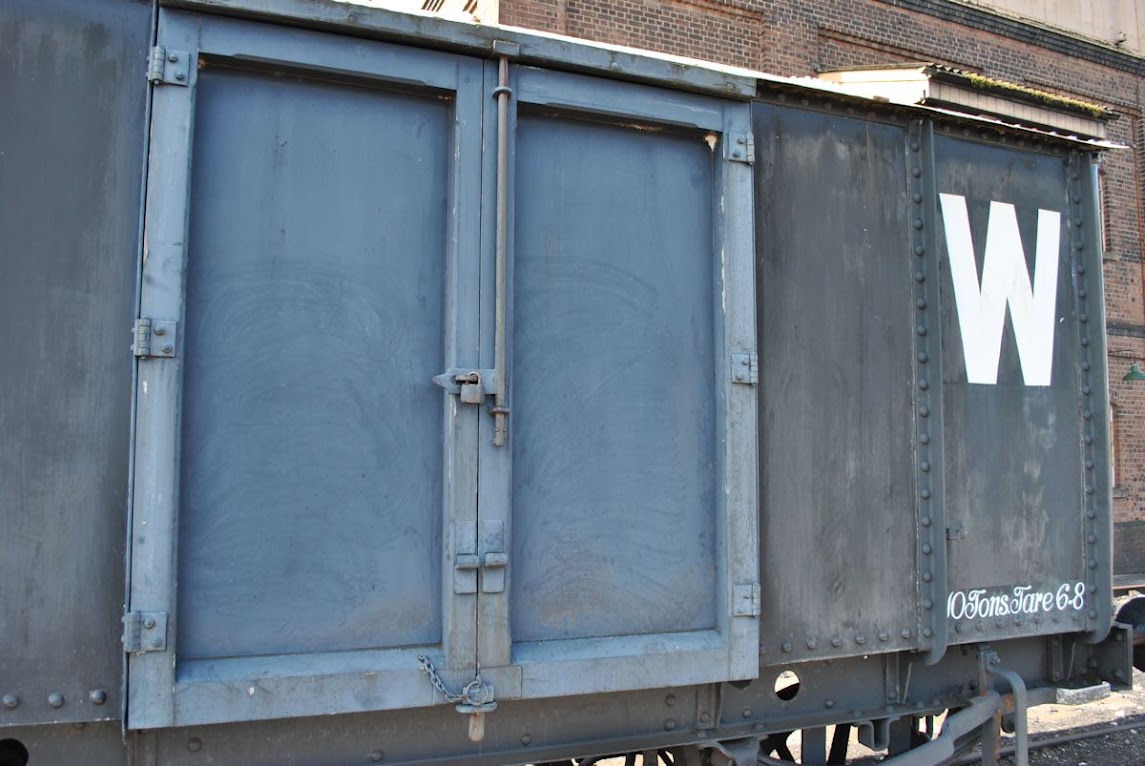 I assume the lighter colour on the Iron Mink doors is a temporary measure, but the question arises: Did this sort of thing also happen on the real GWR at times? Or was the painting process too standardised/systematic for that to happen? 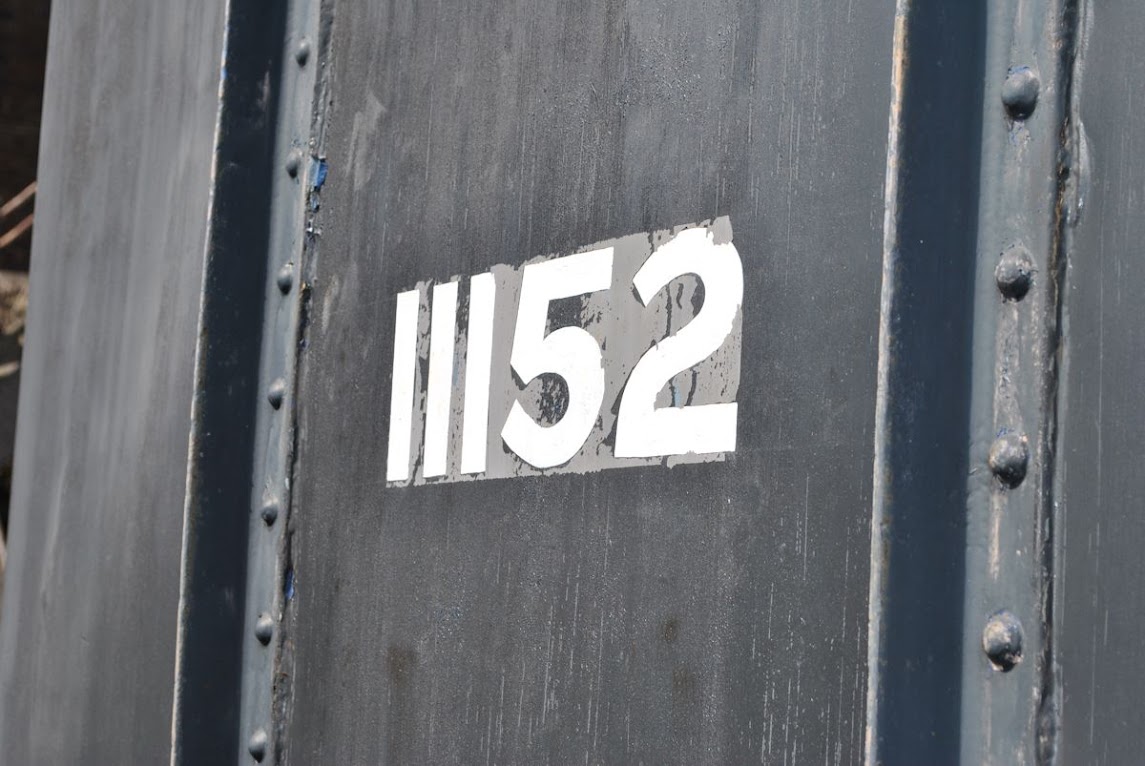 Looks familiar, doesn't it? Anyone who ever had trouble with transfers will recognize this. I don't recall seeing this kind of thing in prototype photos though. Were transfers ever used for numbering GWR wagons? 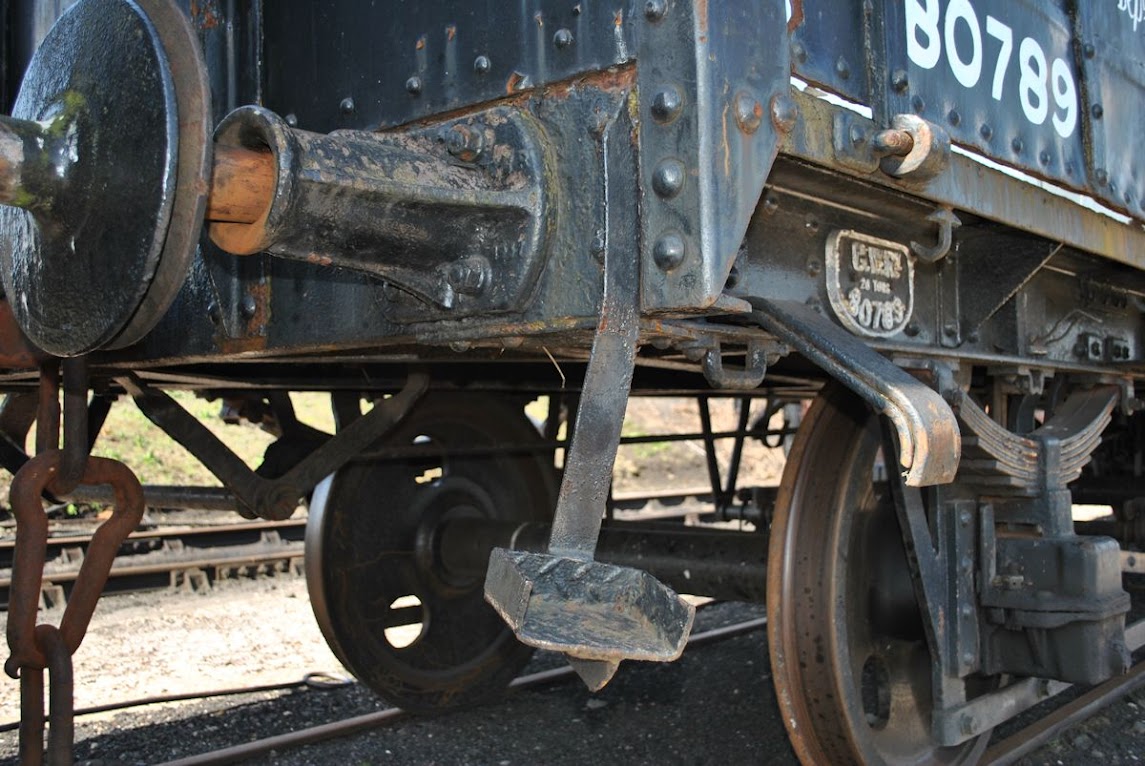 The little imperfections that make it real: A bent step. Don't get me wrong: I find the standard of maintenance very high at Didcot. The question is, could we model this sort of thing and get away with it? 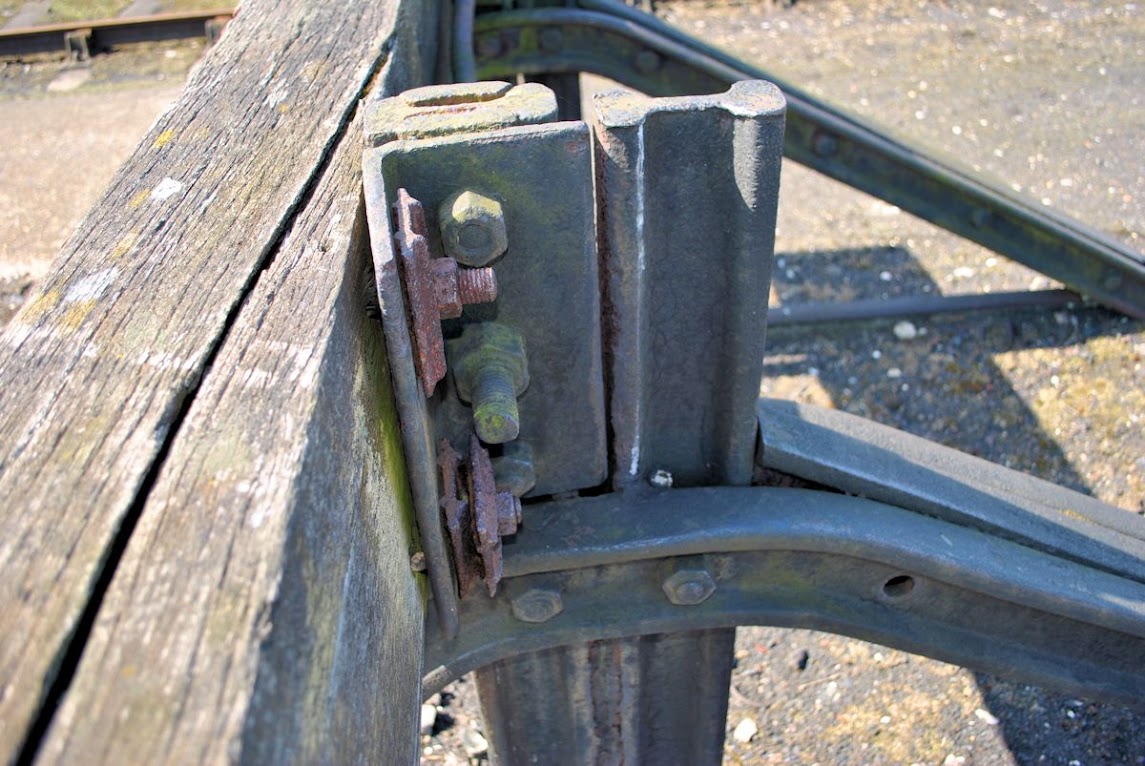 Again: The everyday wear and tear of things. Ideally it would be an interesting challenge to replicate in model form. But the irony is that it would probably just look like sloppy modelling! 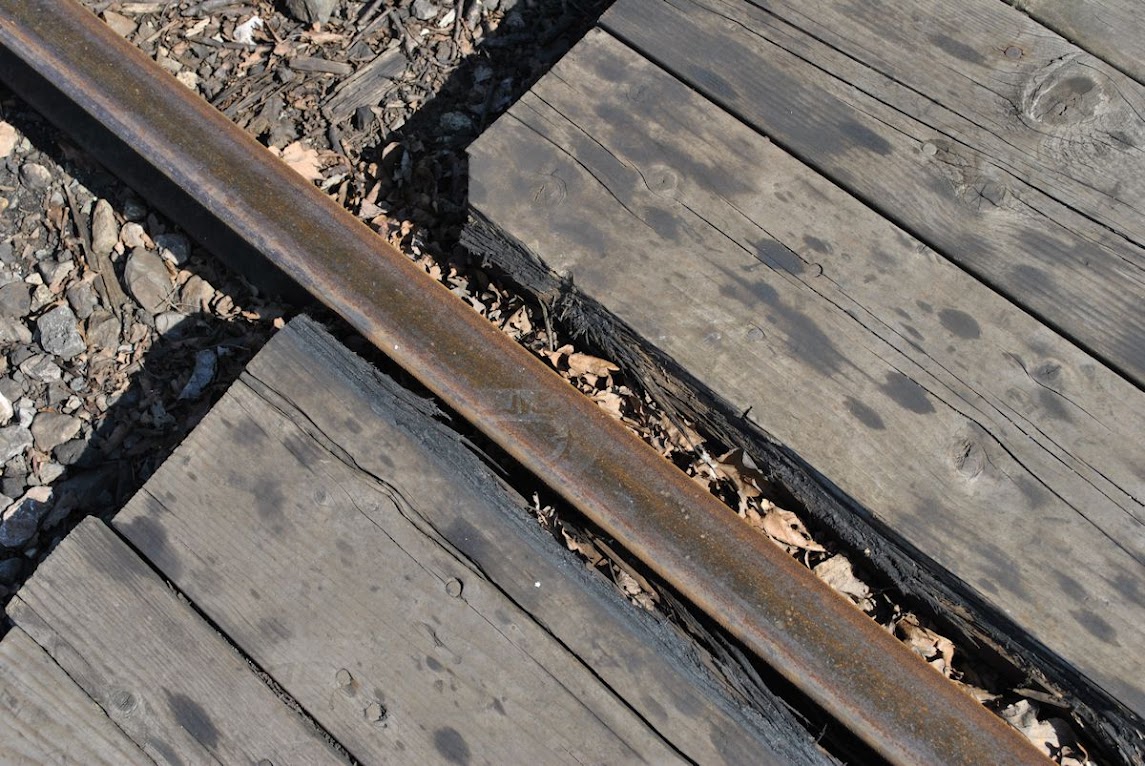 Foot crossing with more room on inside of rail, to allow for wheel flanges I assume. 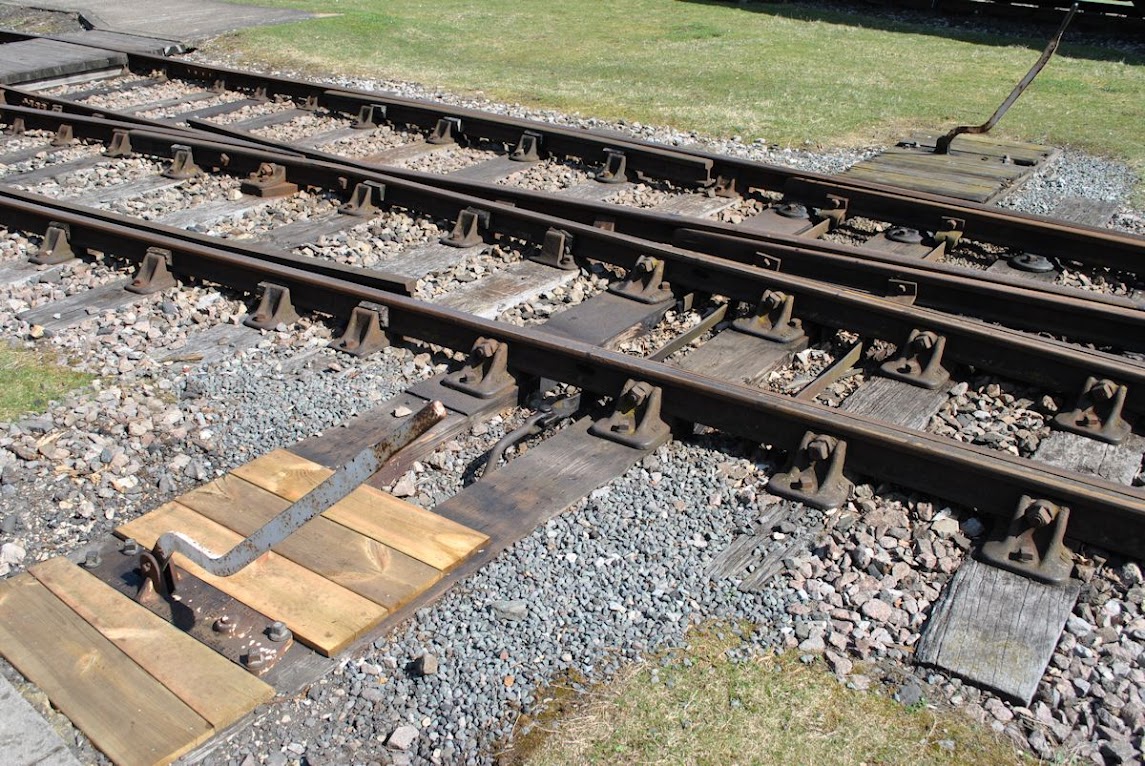 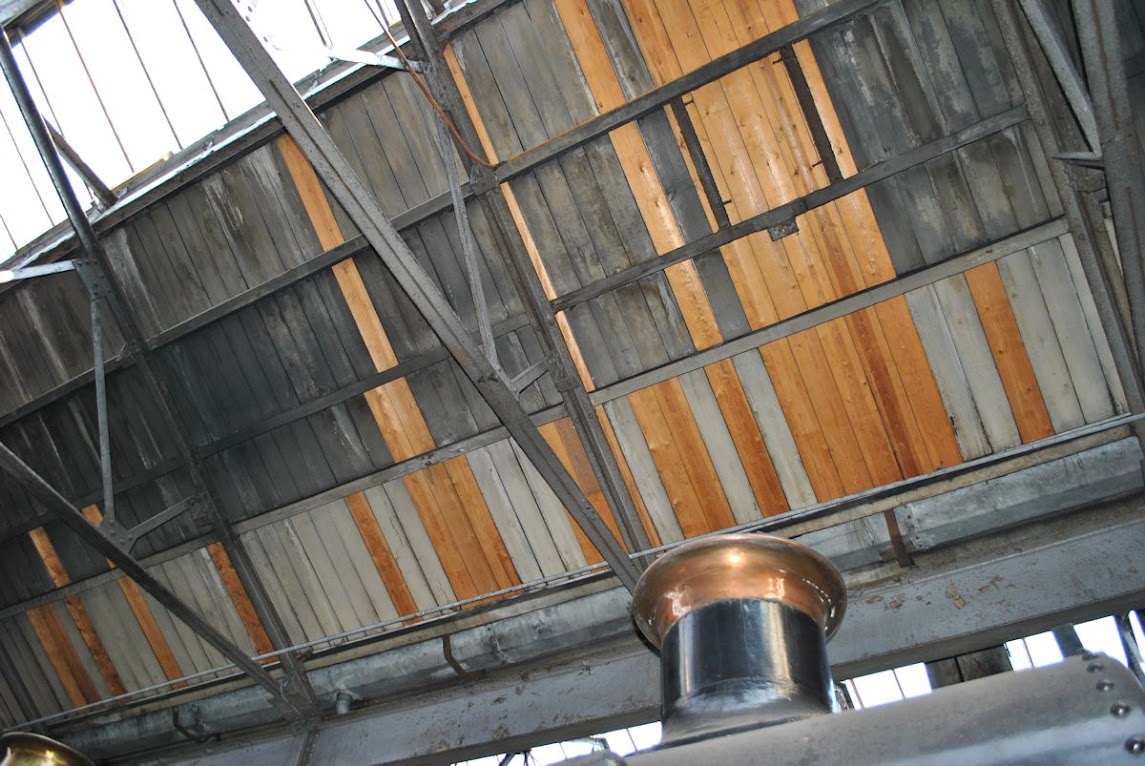 More replacement wood, this time inside the loco shed. Wish I'd done something like this inside "The depot". Maybe next time. Lovely copper cap, eh? :-)