No, this is a not a post about my financial situation - though it could have been! This is about building and painting wagons for my goods depot layout , which is set in the period ca 1900-1908. For wagons this was a real transition period, with a diversity of styles, technical developments and liveries. So I’ve started a wagon building programme which tries to capture some of that variety. Here are some photos of developments so far. 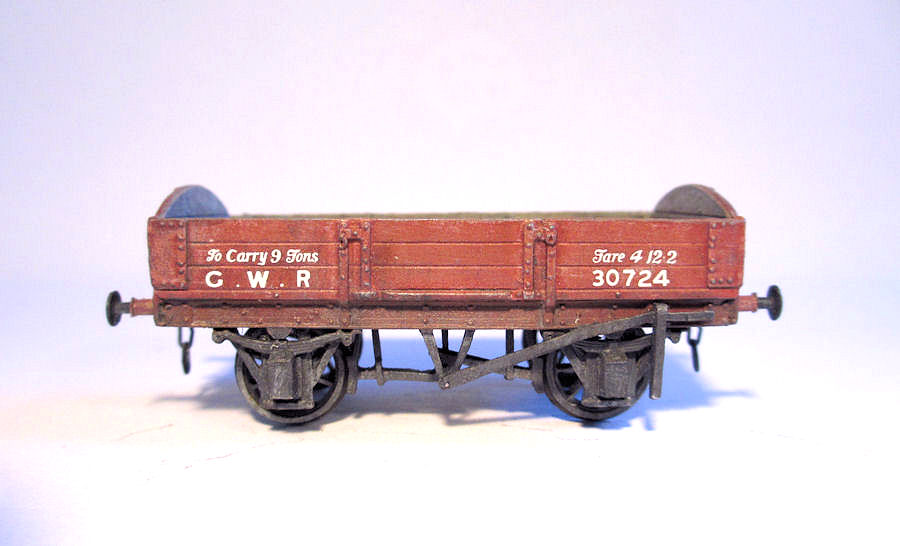 First off was this 3 planker, which I built some time ago from a David Geen kit. It has those nice “old world” round ends. Many were later rebuilt to straight ends, but photos suggest that a few still had those enticing curves in the 1900s. The livery is the pre-1894 version, ie with the small 5inch “GWR” on the left side. It seems this livery could still be seen here and there into the 1900s. 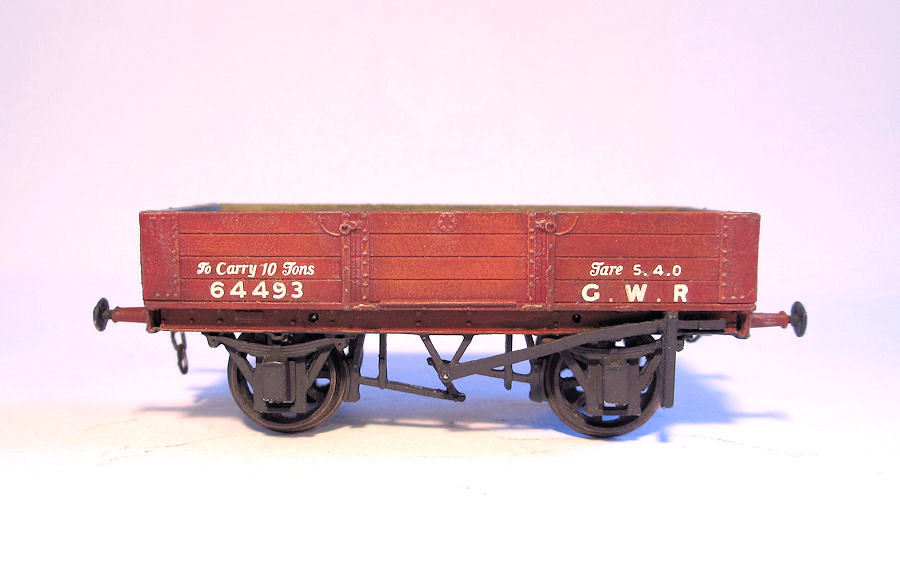 In 1894 the “GWR” was moved to the right hand side of wagons. I wonder why – did someone at Swindon wake up one morning and exclaim “I’ve had a vision! Bring out the paint brushes!”. The non-standard tare numbers seen here are copied from a photo of the real no. 64493. Others had the numbers in the normal italics. The 4-plankers were the dominant type among GWR Opens in 1900. This model is a Coopercraft kit but with the oil axleboxes substituted for (David Geen) grease boxes, which still featured on the majority of wagons at the turn of the century. Nick, I forgot to add the vertical hanger, will see to it shortly! 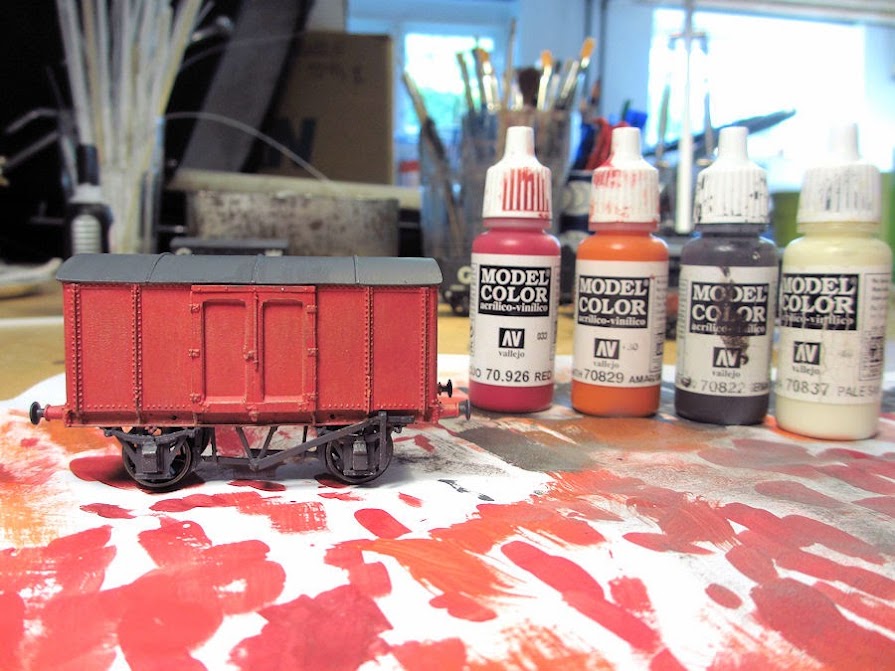 It's been fun experimenting with the shade of red. Contemporary sources indicate a fairly bright (some say light) red. In my opinion, pristine bright red doesn’t work well on layouts, so I’ve gone for a toned down look but with a bit of variety from wagon to wagon. The photo above shows an Iron Mink in the the base coat, which is a mix of bright red and orange. This was then later toned down with dry-brushing, mostly more orange and pale sand. 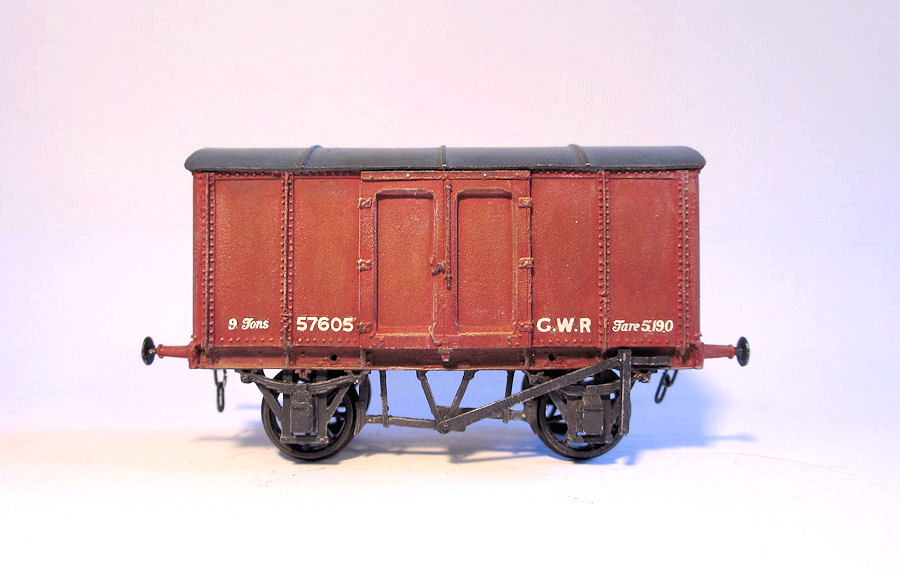 Here is the finished Iron Mink in the post-1894 red livery. I couldn’t fit “To carry 9 tons” in the panel on the left. The GWR painters had the same problem and some photos show use of smaller letters to fit it all in. So I'll order some 2mm transfers and do the same. The iron minks were numerous in the 1900s. This old ABS kit was in fact a Barry Railway version that I had lying about, which I modified to GWR style. I only now see that the doors have issues in one corner. Mutter, groan, grumble! 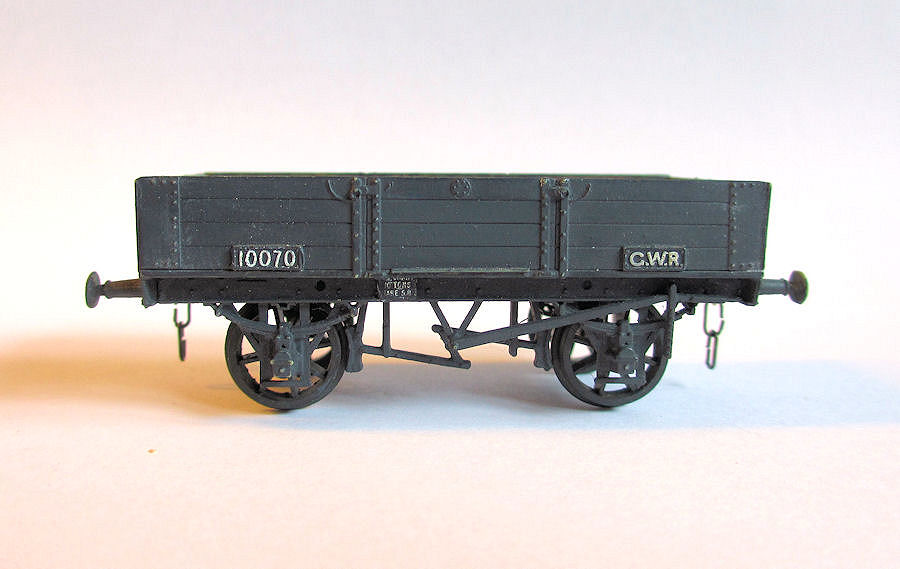 Then it was crunch time. There comes a time in every man’s life when he has to decide exactly when he thinks GWR wagon grey was introduced! For my part, I've been torn between 1898 and 1904.Until recently I was leaning towards 1898, which was the year when the GWR introduced cast number plates as standard on new wagon builds. If that was the case, then new wagons built between 1898 and 1904 would have looked something like the 4-planker above, which I built and painted quite some time ago. 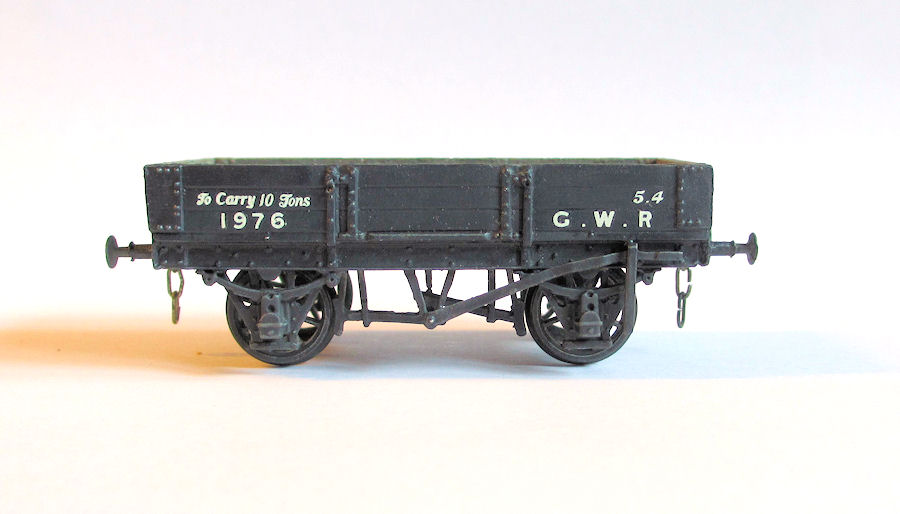 The cast number plates seem only to have been applied to new builds (see notes below). If GWR grey was introduced in 1898, then older wagons that were repainted between 1898 and 1904 would presumably have looked something like this 3-planker, which I initially painted in the grey livery. 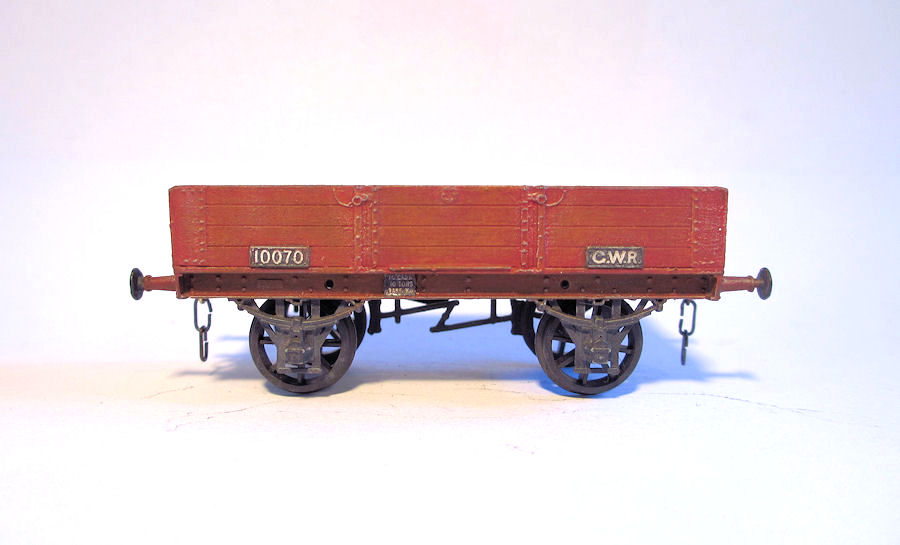 Then I changed my mind! I went through the sources and debates one more time (summarized here), and began to see the logic of 1904 as the year when the grey livery was introduced. So I decided to adopt this as the assumption on “The depot”. The implications are interesting. For one thing, it means that wagons with cast plates would generally have been red. This 4-planker is the same as the one shown in grey above, but now in red. Quite a different animal to look at! (but where's the V-hanger, must have broken off while taking the photo - back to the workbench!). 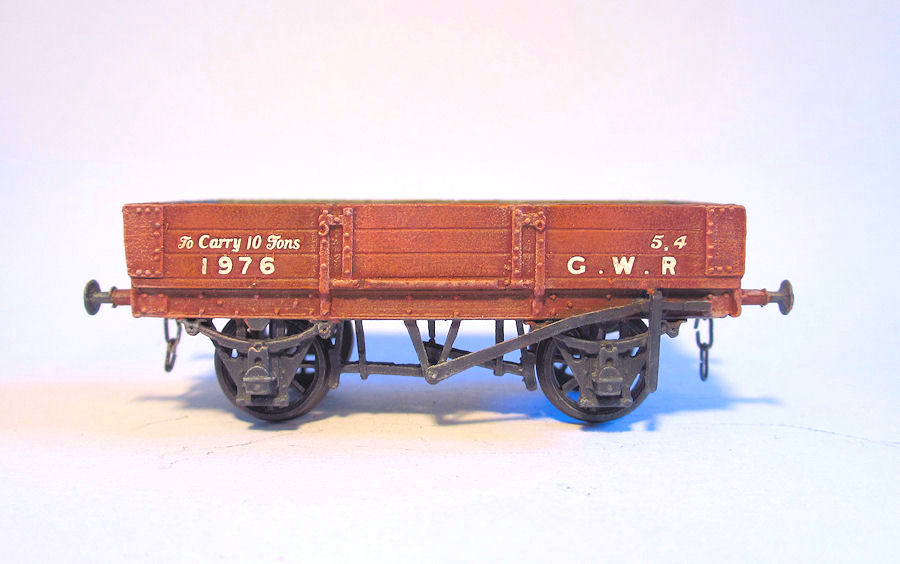 Another implication of the 1904 cutting-off point is that older wagons repainted during 1898-1904 would have carried the 5inch right hand side red livery right up to 1904. This 3-planker is another David Geen kit, but built to represent a 1900s version with straight ends and retro-fitted with oil axleboxes. The tare numbers are again a deliberate deviation from the norm, reflecting that these numbers were often painted on after the main lettering job. Whether or not the underframes on these wagons were in fact also red is a separate discussion! 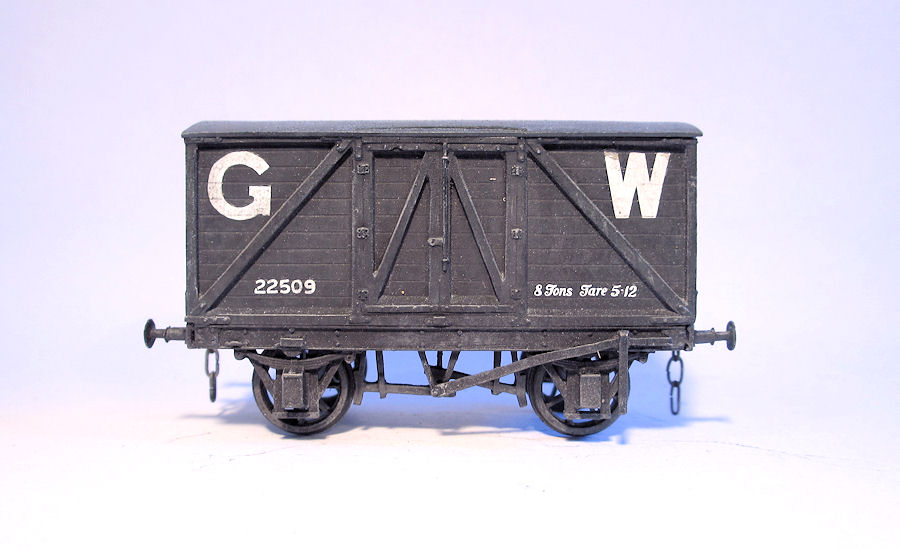 And then, at last, came the good old "GW" livery, which was applied from 1904. Together with the Iron Minks, these pre-diagram outside-framed wooden wagons were the standard vans at the turn of the century, until the "new generation" of wooden V5 vans began appearing in 1902. 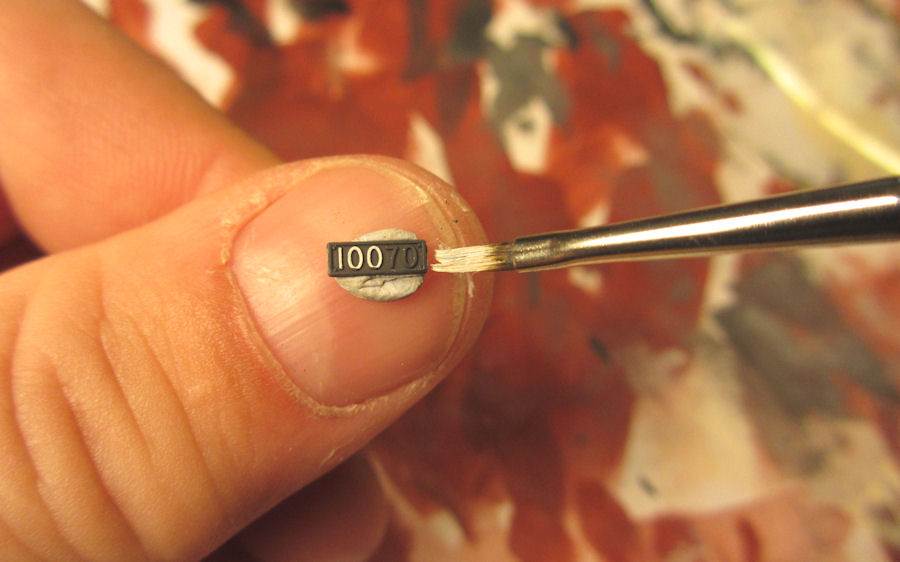 Finally a few of my own notes on cast plates, based on the info and photos I could find in my books.

Regarding the latter point, see eg the very interesting photos from Reading Kings Meadow yard around 1905-06, in GWR Goods Services Part 2A, pages 16 and 18-19. These show many wagons with pre-1904 small GWR lettering, together with wagons carrying “GW”. Only 1 or 2 wagons with cast no. plates can be seen.