I’ve slowly started work on the next layout in the Farthing series. “The sidings” are inspired by an interesting arrangement at the back of Gloucester Old Yard, where a headshunt served a series of kickback sidings that gave access to a variety of facilities: One siding served a private “biscuit” depot, another served the local waterworks, and finally there was a backroad to the loco depot’s ash sidings and coaling stage. 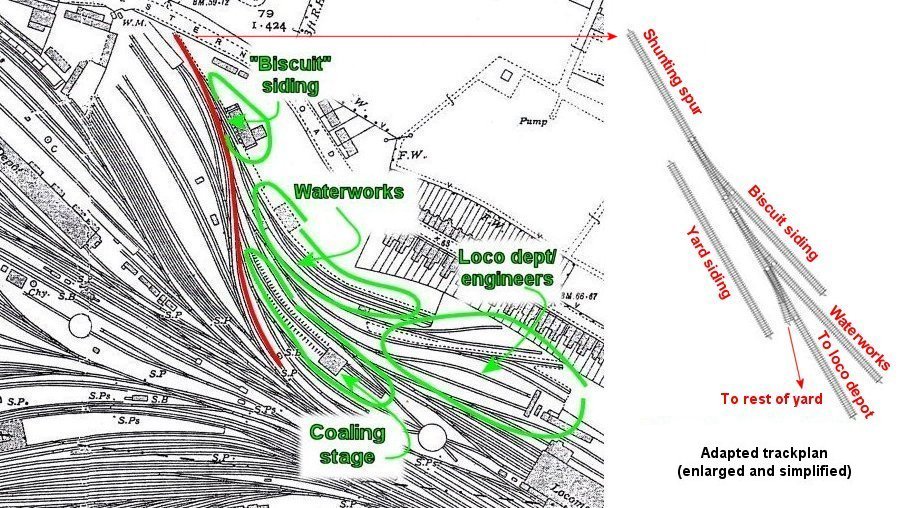 Above left is the overall layout at Gloucester (see this post for details). The headshunt is in red. On the right is the rudely simplified and manipulated trackplan that I have extracted from this to suit my available space and personal tastes.

Here is the plan again, as it will appear on the layout. The scenic part of the layout will focus on the “neck” of the headshunt (what I think the GWR would have called a shunting spur), as well as the biscuit- and waterworks sidings - all turned through 180 degrees compared to Gloucester. Also featured on the layout is the lowermost siding of the main yard, where Loco Coal and ash wagons are stored, as per Gloucester. The "backroad" siding leading to the loco depot is mostly off-scene, but still plays an important part in operating the layout. The rest of the station is represented by a simple fiddle yard. The headshunt and sidings can accommodate a minimum of 3 “standard” four-wheel wagons and a tank loco. The very short shunting spur emulates that at Gloucester.

The table above shows the main "moves" I can make on the layout. An interesting operational feature at Gloucester was the exchange of Loco Coal and ash wagons: These were stored in the main yard, and when needed they were picked up by the yard shunter, moved to the headshunt and turned over to the shed pilot, which then propelled them to the loco depot. The yard shunter also worked wagons into the “biscuit siding” and the waterworks. These features are carried over to my layout - although I'm taking some liberties: In reality the biscuit siding was partly operated by gravity shunting, but I’m not doing that! As for the waterworks, I don’t know exactly what the traffic was, but a bit of research and photos suggests coal in for the pumping engines, and waste ash out. As salt was sometimes used for water softening I also saw an opportunity to also run a salt wagon or two, until someone corrects me!

I want to use this layout as a way to improve my skills at constructing prototype buildings. So I've been looking around for various prototypes that were either standard GWR or that I found interesting. Some will be replicated directly, others will be adapted.

Biscuit shed. The actual shed at Gloucester wasn’t very inspiring, so I will base mine on a downsized version of the rather nice "beer shed" at Stratford on Avon. This is open at the front and thereby gives a view across the loading dock into the shed, as indicated above. It is closed at the back and thereby hides the small radius point and entry to the fiddle yard behind it.

Stable block. Can’t have a Farthing layout without horses! And I’ve always wanted a stable block. It will be fairly large with 8-9 stalls, reflecting that Farthing is a medium-sized mainline junction. Similar to the one at Witney.

Mess room. This was inspired by the lovely GWR building in Truro yard that CK has kindly shared some photos of here.

Water works. Not sure how I will do this yet, and I may chose only to have the works lightly indicated. In any case I'm thinking something low, like these at Low Bradfield - althought it would be nice if I could find a prototype in GWR territory.

Replaceable cameo. I’m pondering whether I can try out the idea of replaceable cameos in the waterworks siding, similar to the idea sketched out previously in this post.

Above is an updated attempt at showing the overall scheme of things at Farthing so far. I don’t intend to actually join up the layouts in practice, but it’s nice to have a general storyline behind it all. Sadly I haven’t given much serious thought to this as I went along, which means it’s now a bit of a challenge to make it all fit into an overall plan that makes reasonable sense. Anyway, essentially we’re talking about a medium-sized junction station in a cutting, with some creative earthworks to accommodate the growing town around it. Shades of Newbury, a touch of Kings Meadow, and delusions of Gloucester!

That's about it for now. My original idea was to set the layout in the 1940s, but after mulling it over I’ve decided to stick with my normal Edwardian timeframe. That won’t stop me from doing the odd “out of period” running session though!