Last year we had a discussion about SDJR Road Vans here on RMweb, which revealed that – contrary to what one might think – these vehicles travelled well beyond the SDJR on a regular basis, including foreign destinations right up to London. For details, please see Buckjumper’s notes in the thread.

I thought I might justify one of these vans making an occasional appearance at Farthing, perhaps carrying small consignments of cheddar, cider and other Somerset delicacies to satisfy the palets of Wiltshire’s gentry. 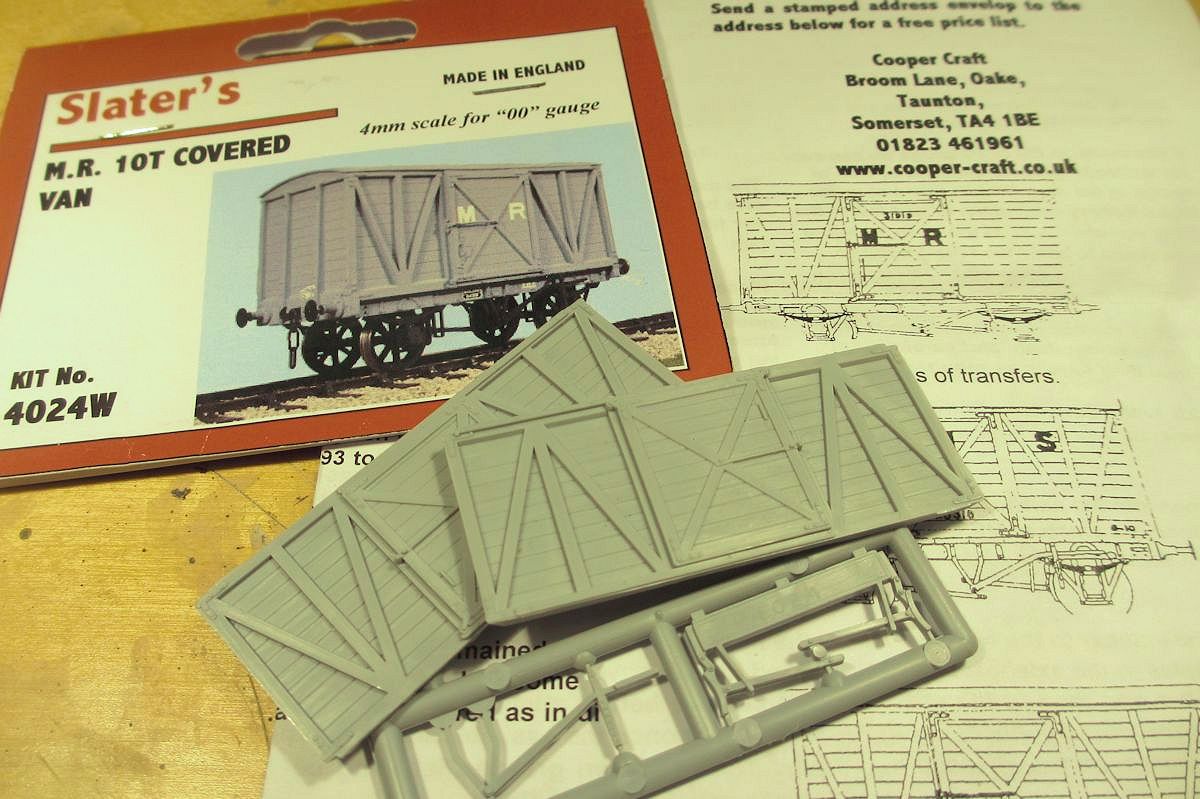 The SDJR had at least two designs of road van, one of which was based on the Midland Railway diagram D363 vans. Slater’s do a kit for the latter MR van, so I thought this would be a good basis for a kit bash. As it transpired, the project came to involve a lot more scratch building than kit building! 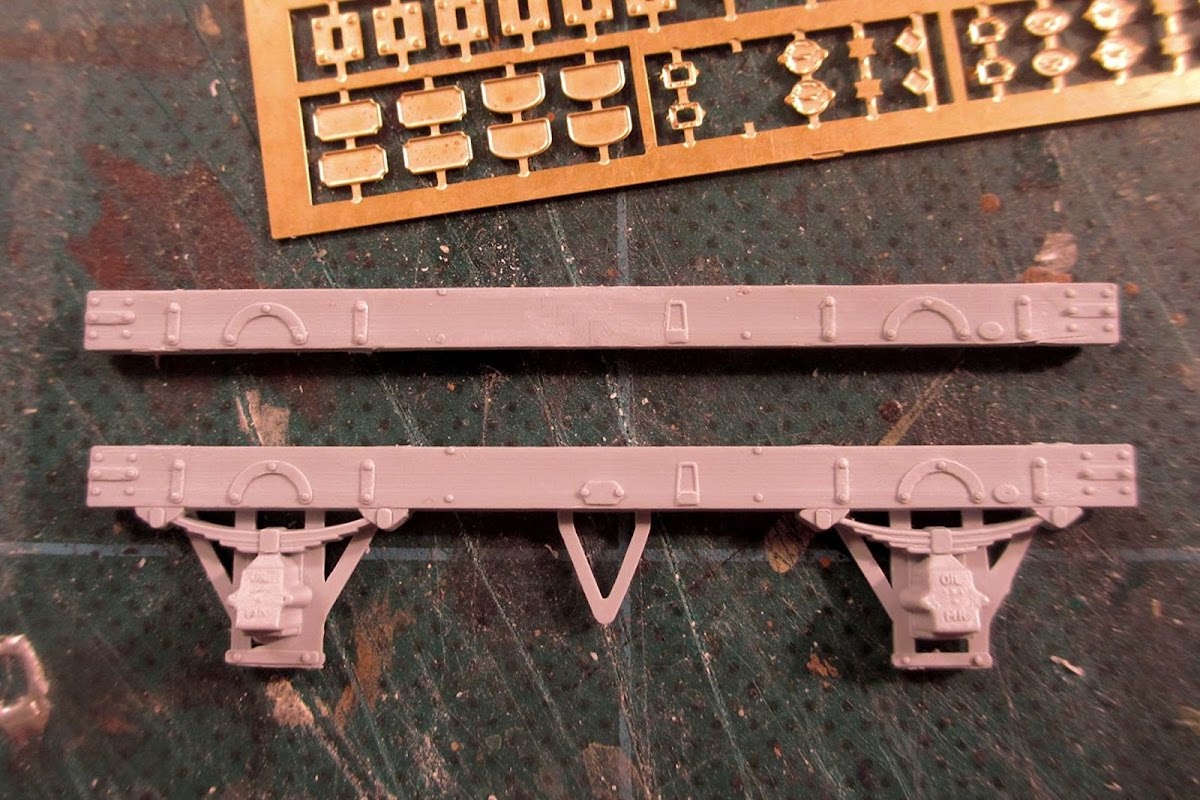 I began with the chassis. As can be seen here, the kit comes with oil axleboxes but my photos of the SDJR vans show Ellis grease axle boxes. So I removed the axleboxes and W irons, and also filed off some of the solebar fittings, to be replaced later. 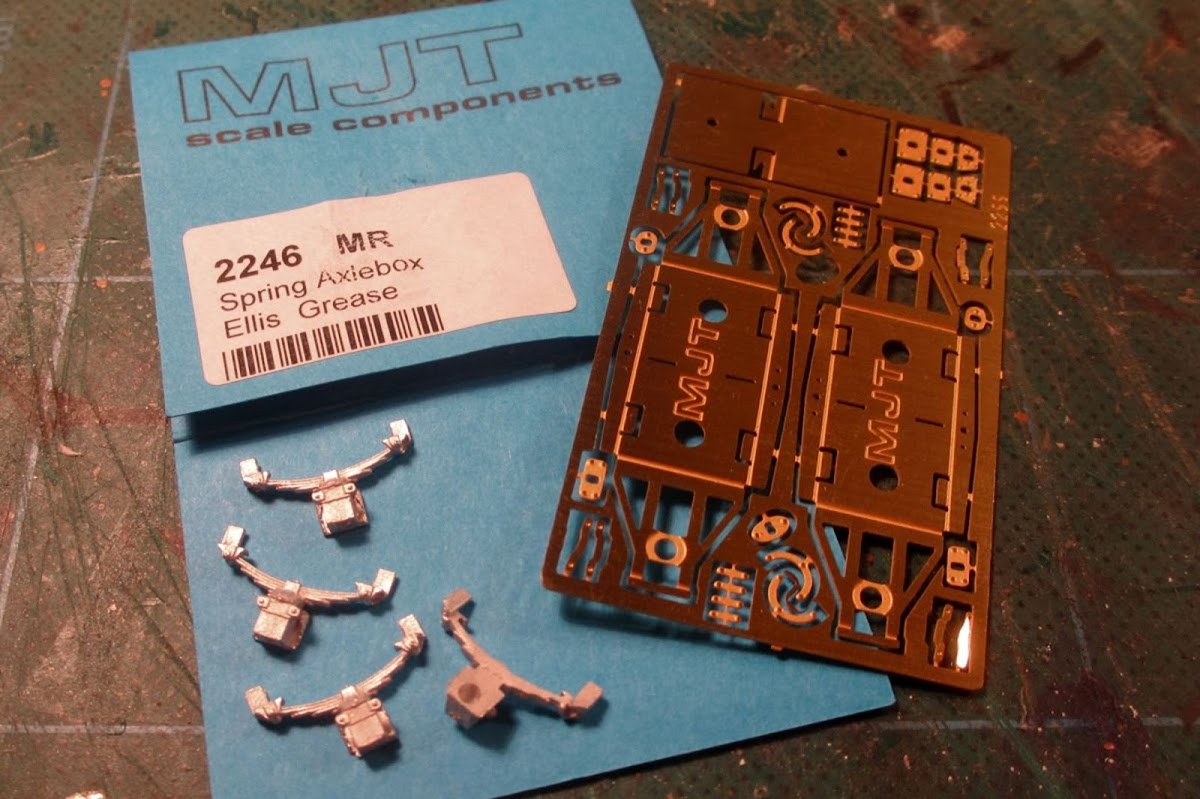 I bought in some MJT compensation units and and Ellis grease axleboxes from Dart castings. 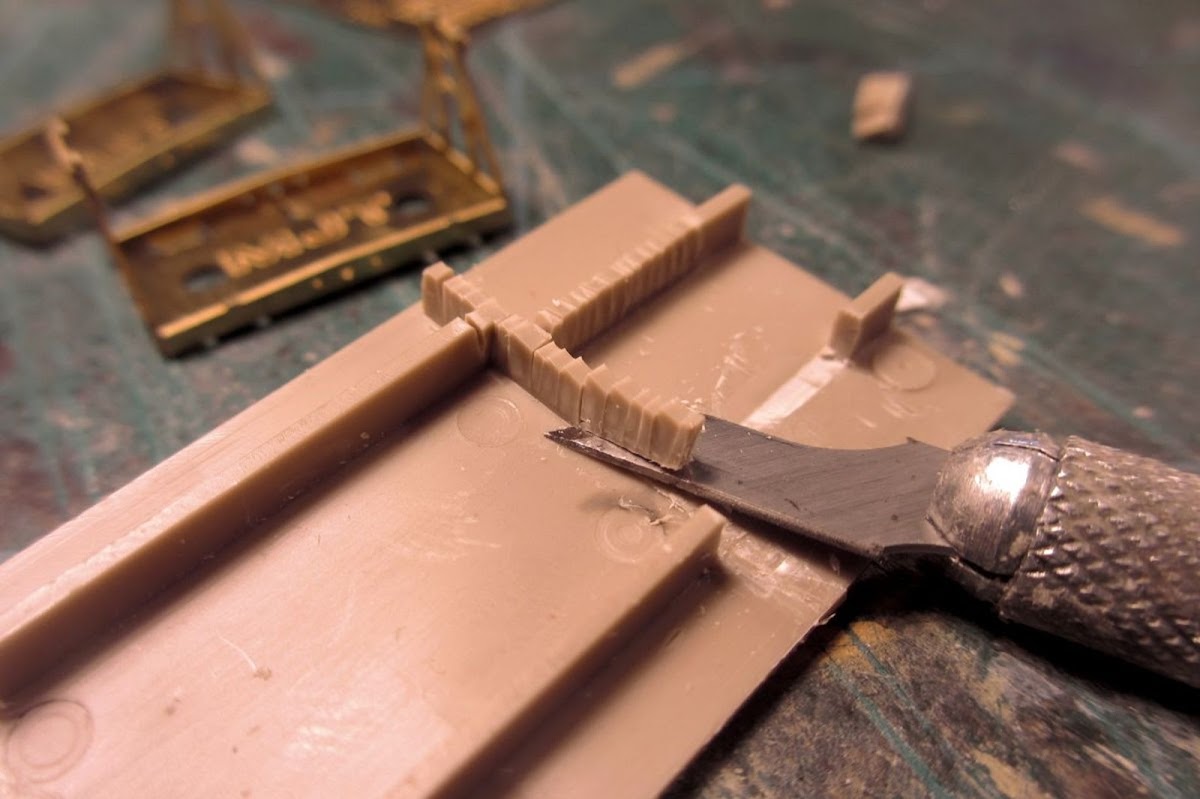 To make space for the MJT units, parts of the underframe from the kit was cut away, using what I call the “salami method”. 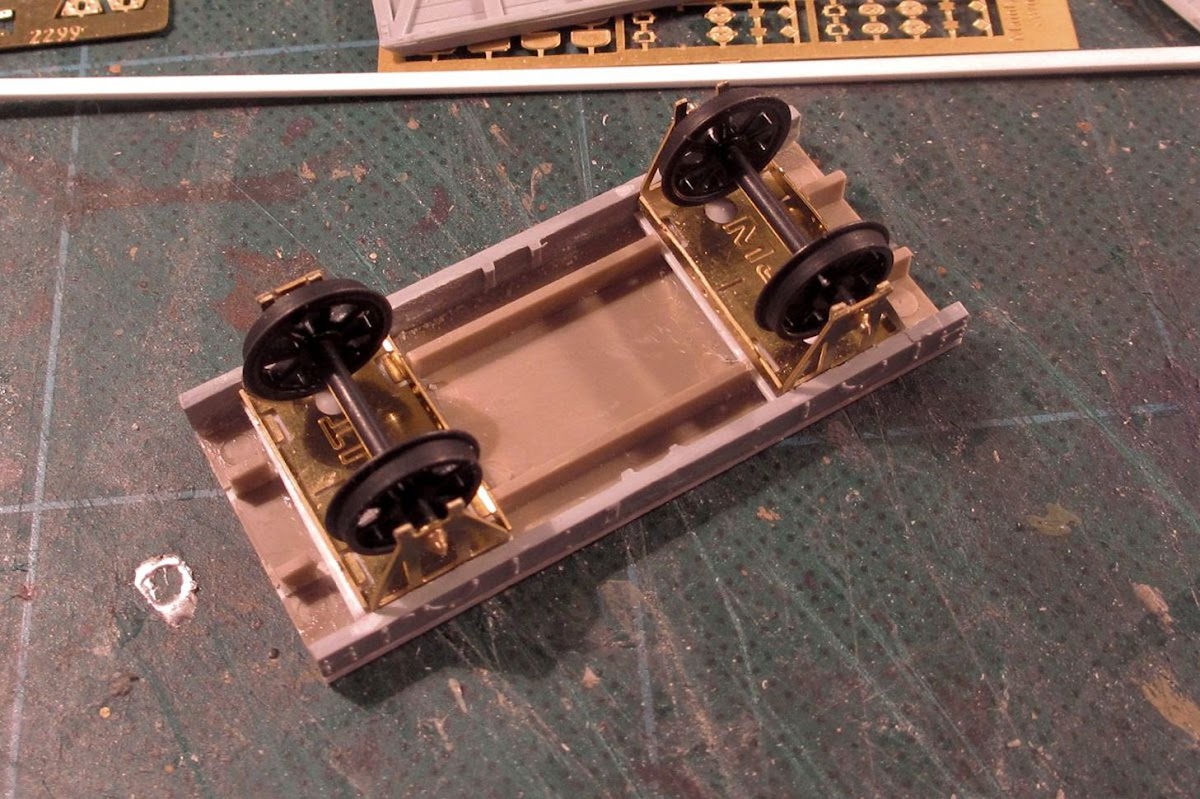 Plastikard packing under the MJT units to get the right ride height. 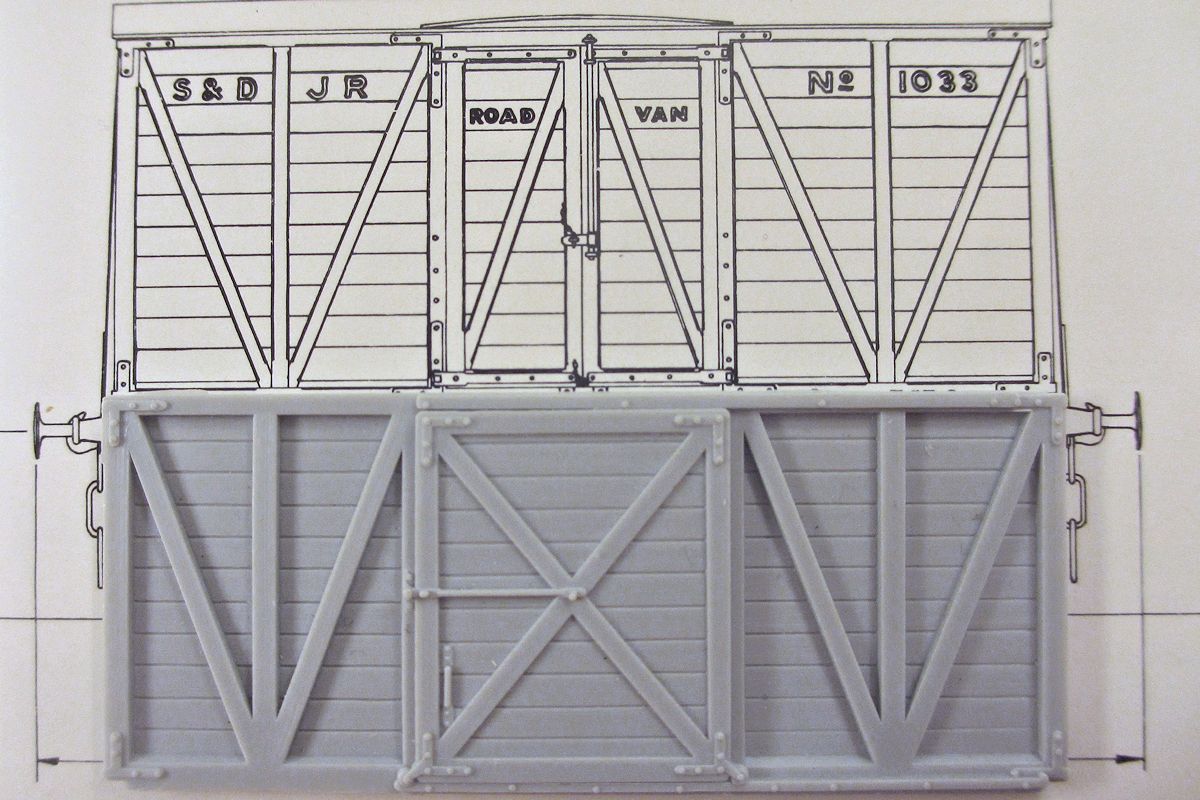 Then came the time-consuming part. As can be seen above, the Slaters kit has a sliding door type which is wrong for the SDJR vans. To make matters worse, the door is off-set to one side, meaning the Vs of the framing aren’t actually symmetrical. So I decided to scratch build new sides. 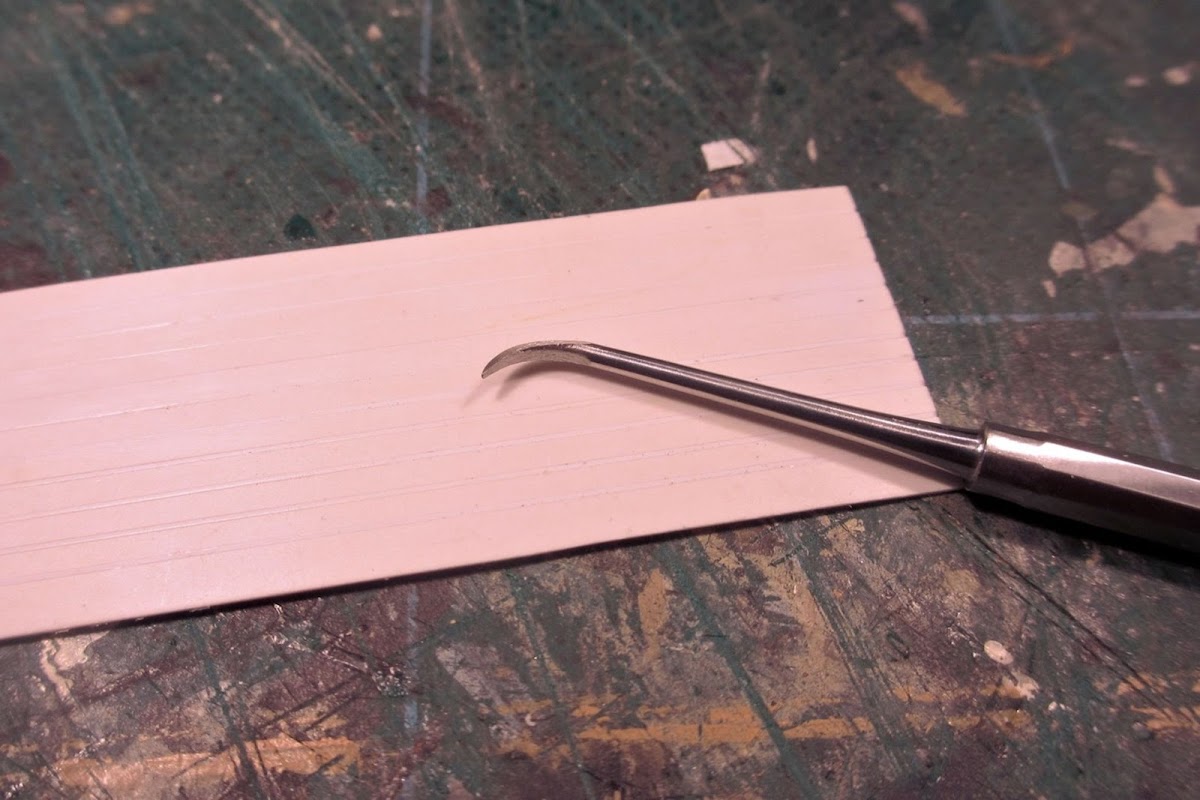 For the new sides I used plain Evergreen 0.5 styrene, and did the planking with my new scribing tool. This makes a neat V-groove, whereas other methods – eg the back of a scalpel blade – tends to make an unsightly ridge along the groove. 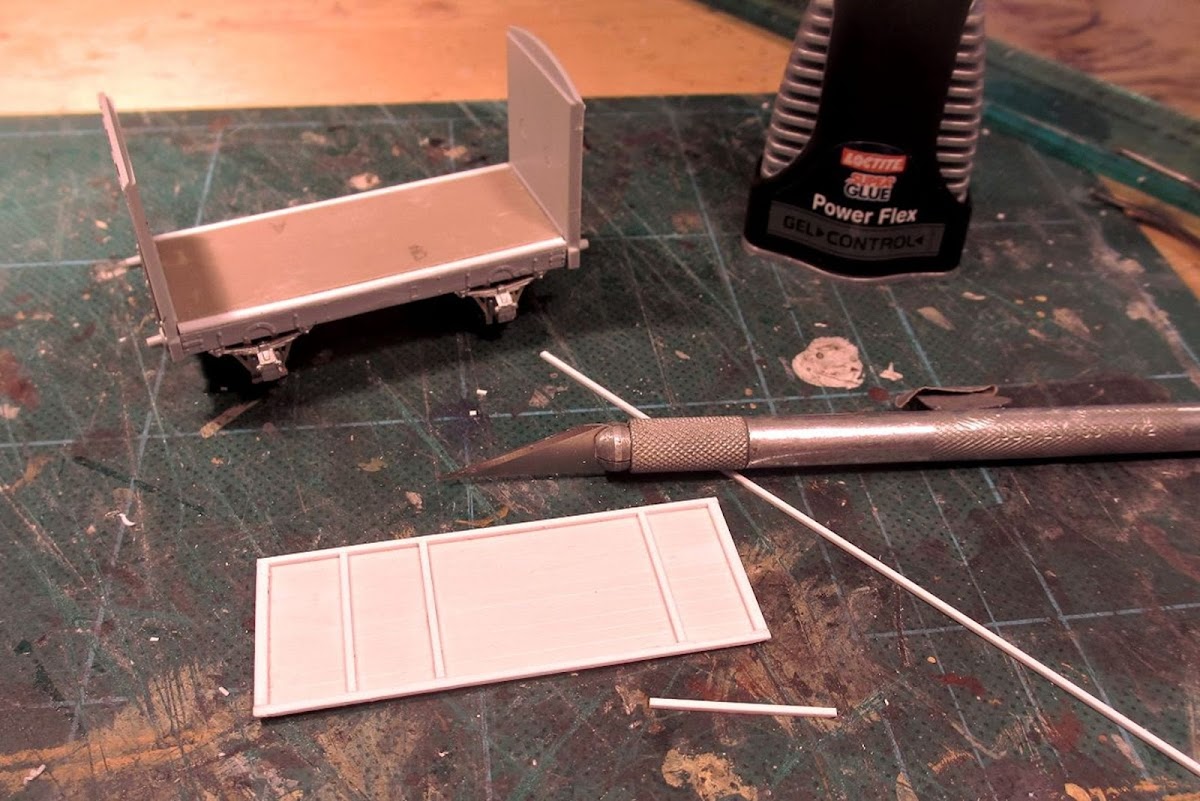 The framing was a bit tricky. The joins with the van ends are mitred, and the bottom framing is sloping in order to let rainwater run off. It helped to fit the ends to the chassis, so that I could offer up the sides to the van and check that everything fitted as I went along. I trust my fettling more than my measuring! 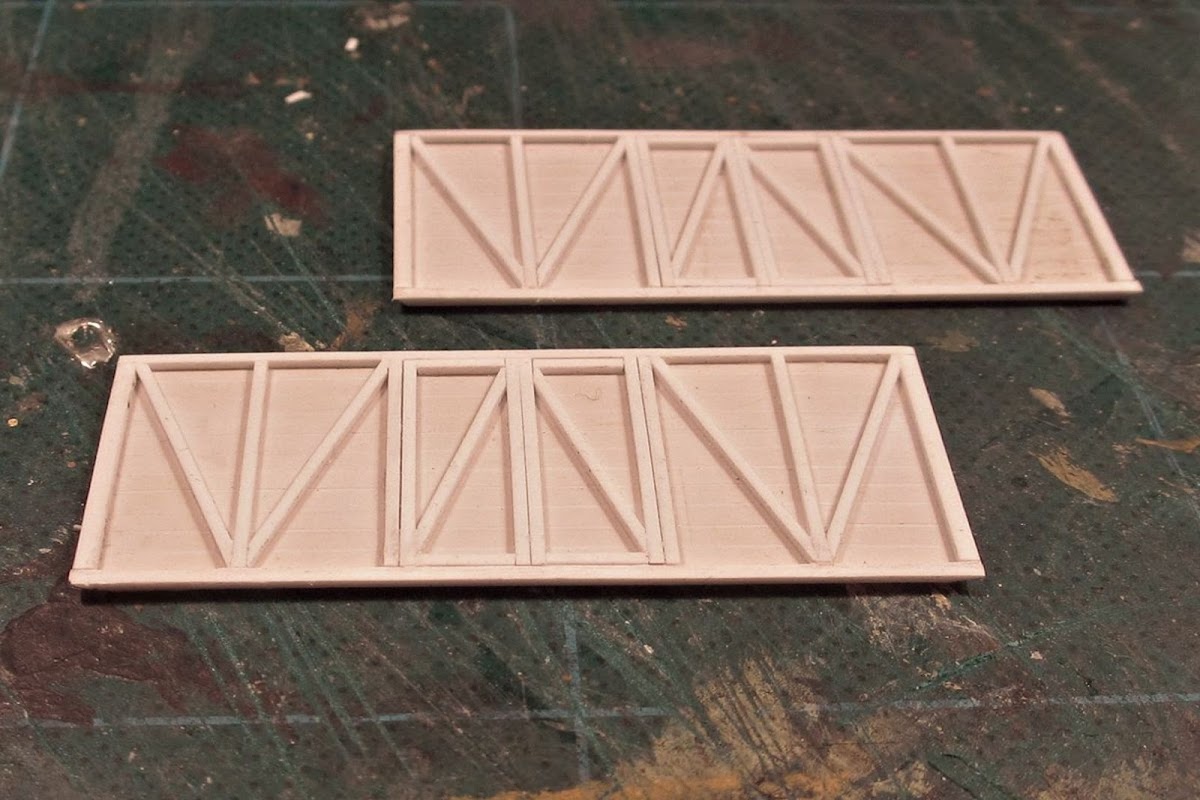 The framing all done. 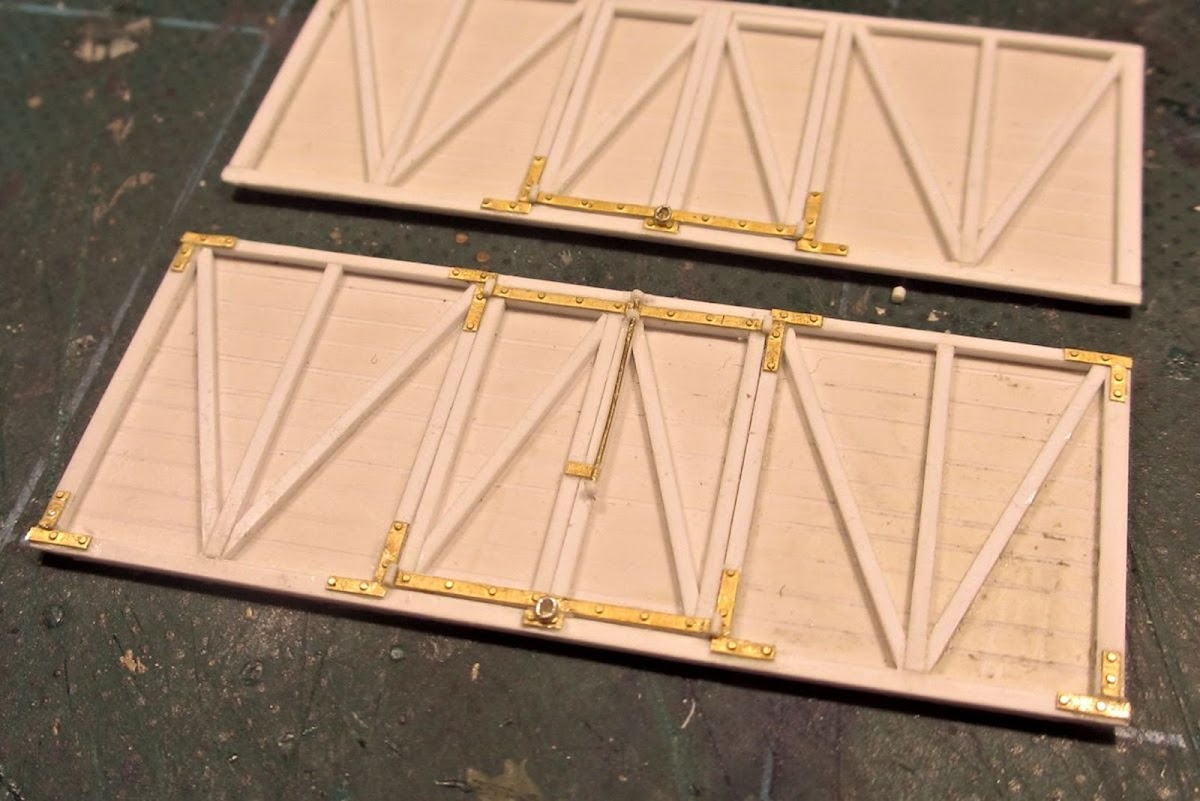 For the strapping I used a general etch from Mainly Trains. Having done a full side, I realized that the strapping should have rounded ends. I decided to leave it, but next time I’ll use plastic strip instead as this can be fashioned as required. Door hinges and locking mechanism were made from plastic rod, wire and chain. 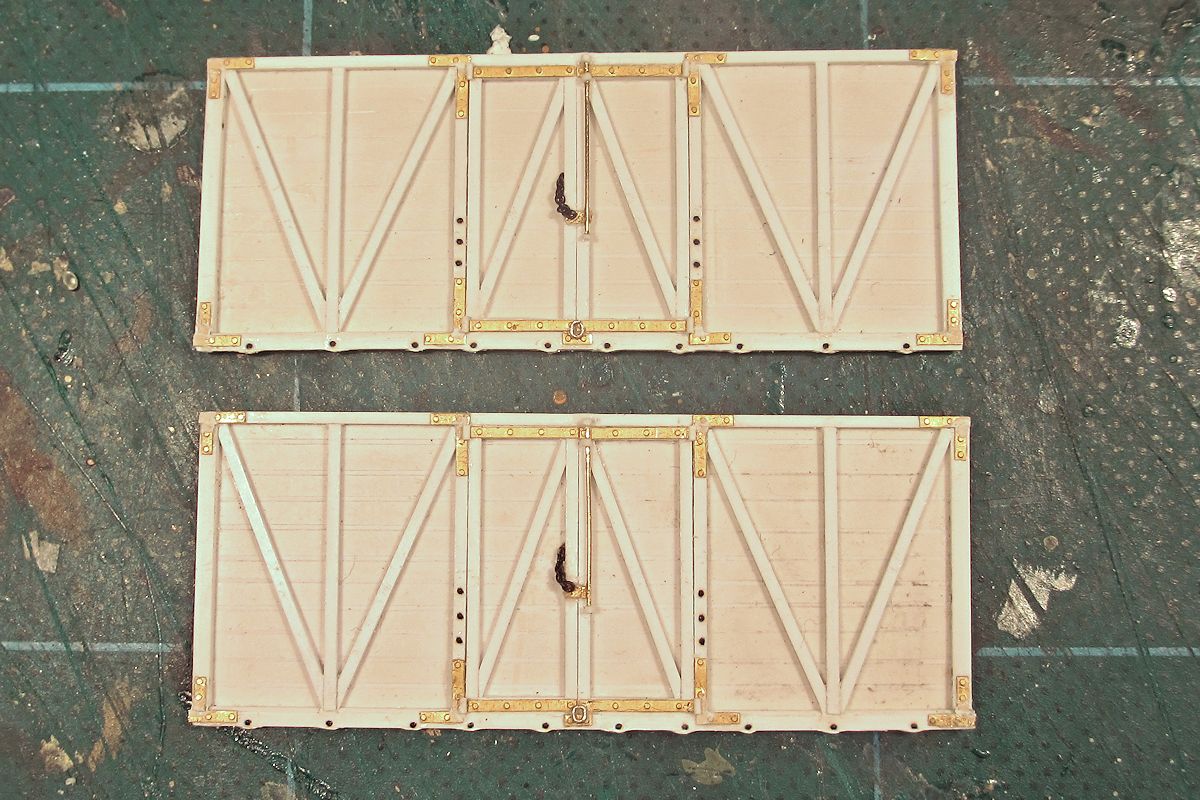 Bolt heads were added using rivet transfers. The lower framing “dips” where each bolt is mounted. This was replicated with plastic putty filed to shape. 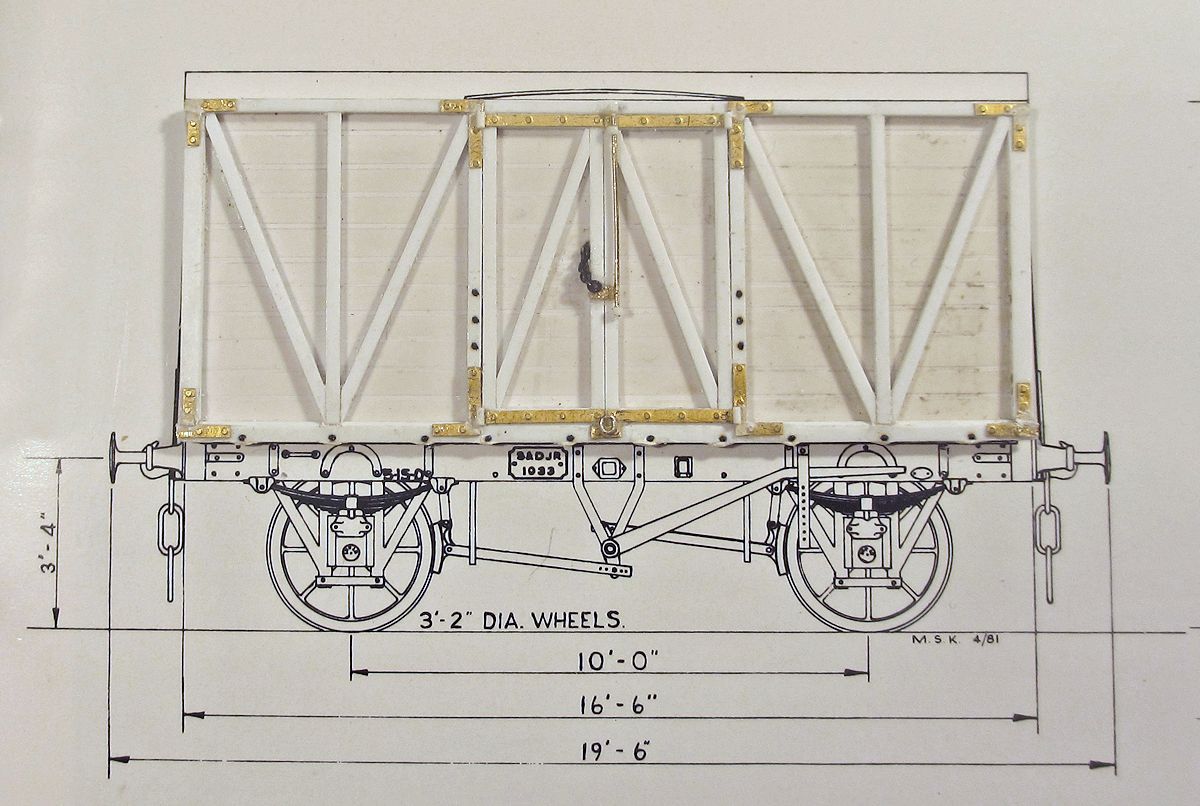 Sides checked against drawing. The perspective makes the side look a little too long here, but it fits in reality (honest, guv!). 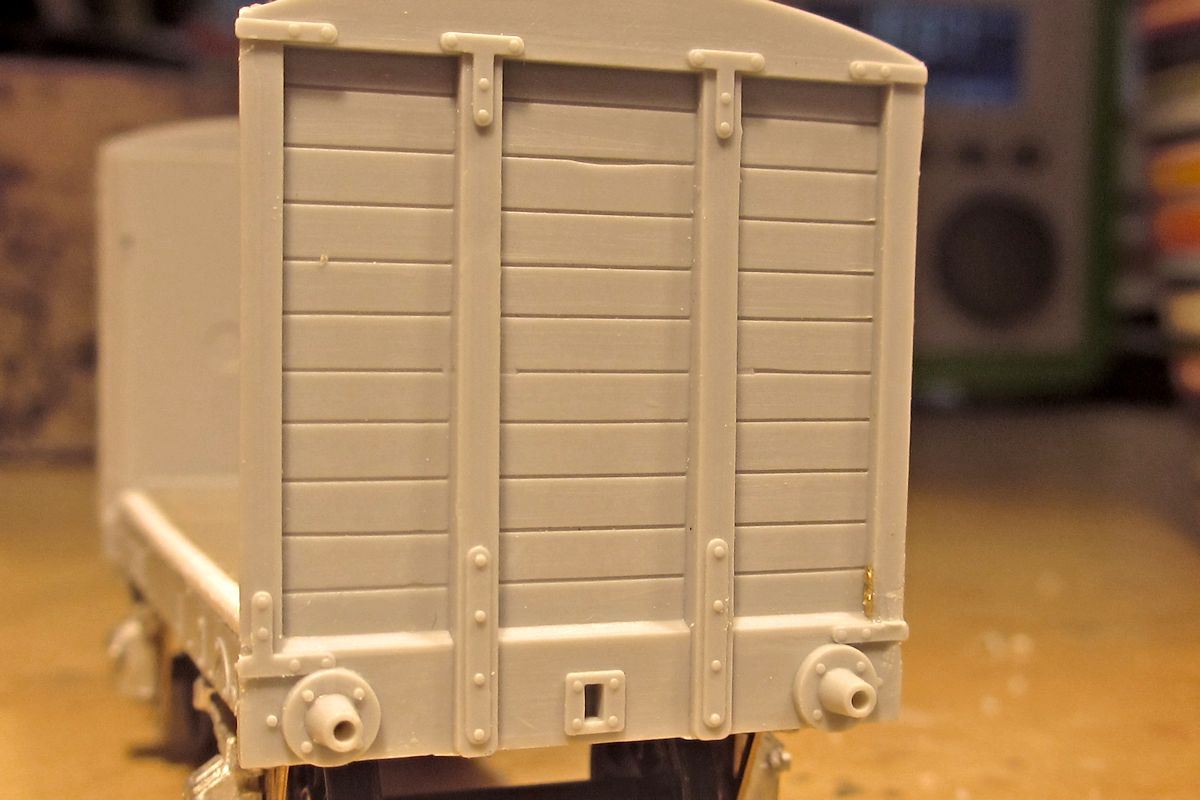 My glorious reward for scratchbuilding the sides was that the ends now looked a bit coarse by comparison! I decided to leave them as they were, except for a bit of modification to the strapping (lower left is as it comes, lower right is modified as per the prototype photo). 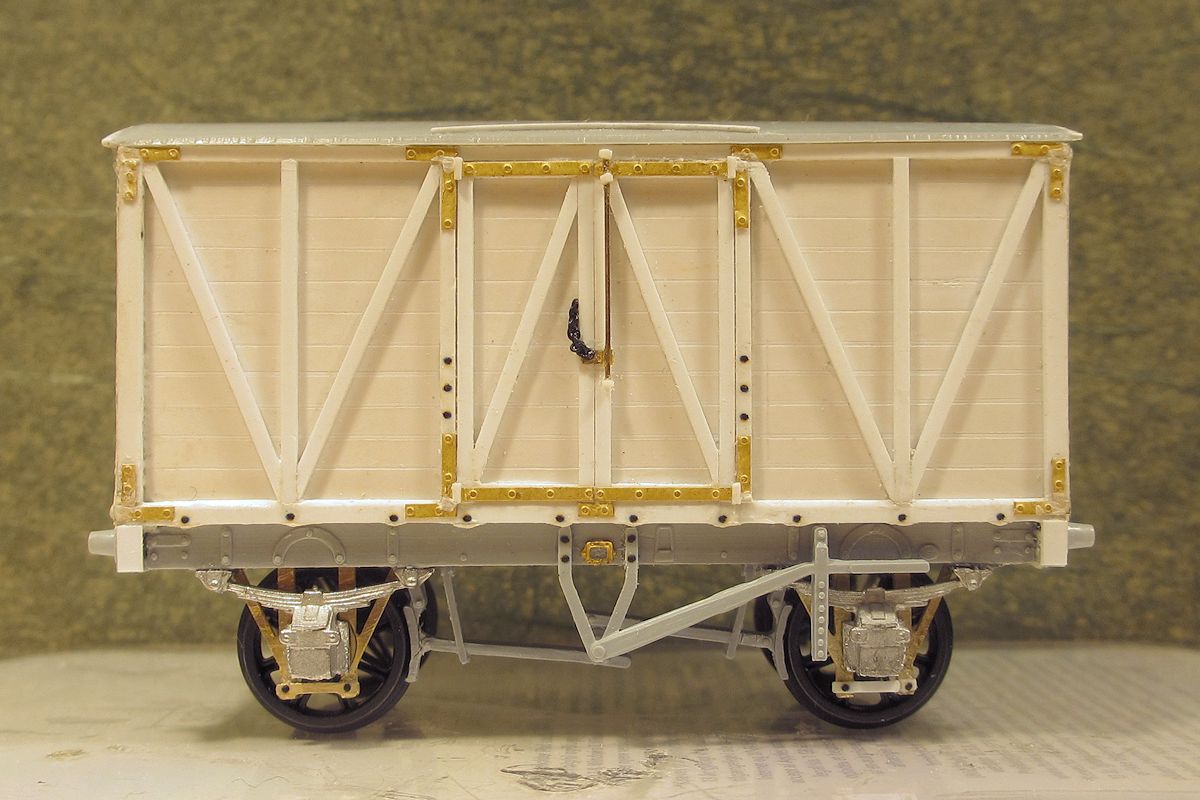 Ready for primer with brakes and various other fittings now added. The headstocks were extended a little to be flush with the lower framing, as per the photo in Southern Goods Wagons. The roof seemed a little short to me – even for the original kit – so I extended it by 0.5 mm at each end. 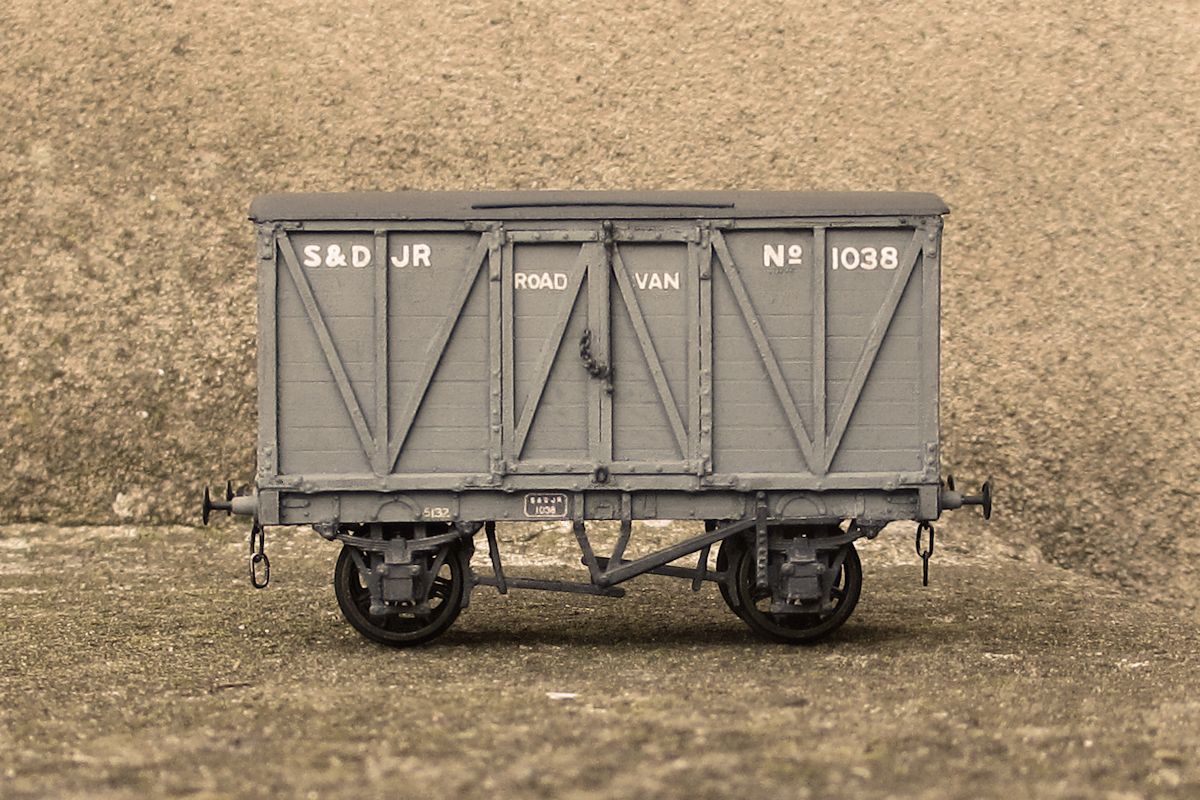 The paint job did not go well. Unfamiliar with the livery, I first sprayed on a light grey, then tried a darker one, then the light one again, etc. As a result, the grooves in the sides started filling in and revealed that I hadn’t cut them all to equal depth. Lesson learnt, the hard way! I couldn’t find any available SDJR lettering, so used individual letters from various HMRS sheets (the SR pre-grouping sheet is particularly useful). Number plates are a print from the original photo, with the perspective changed in Paintshop. The split spoke wagon wheels are temporary till I get some new plain ones. 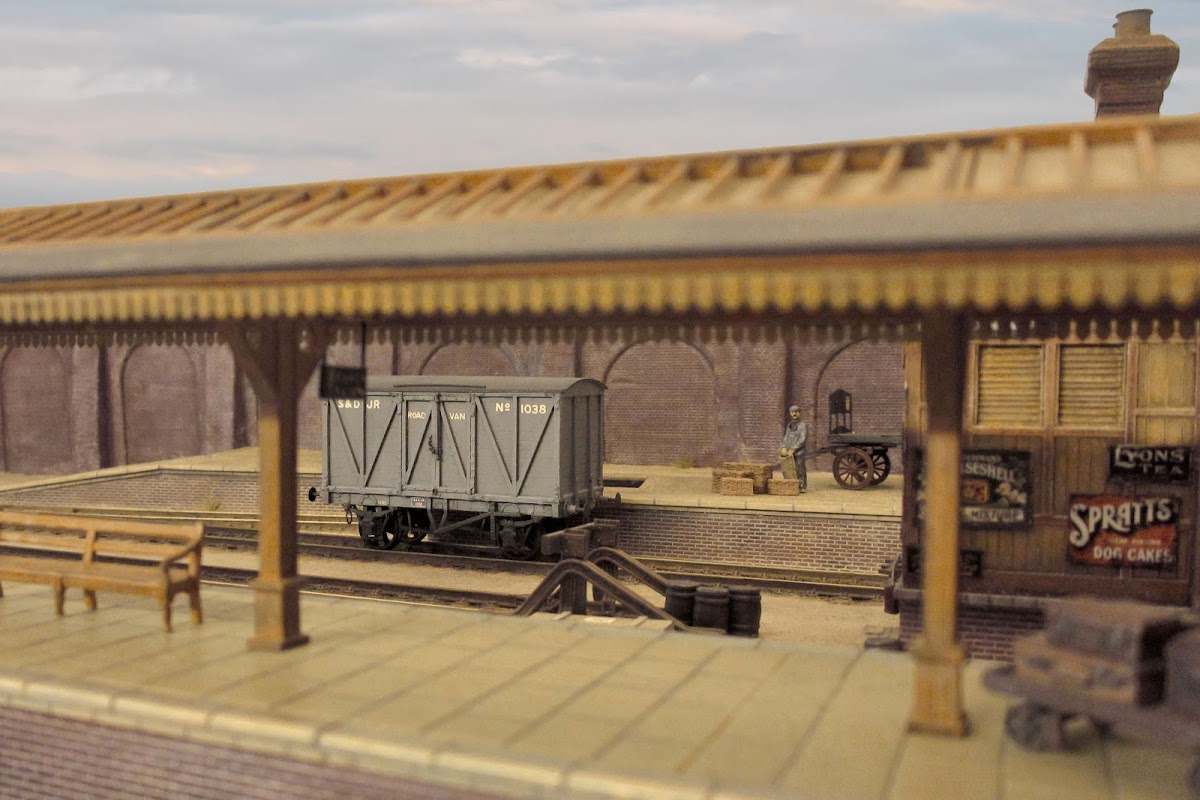 Thankfully, the slightly heavy paintjob is not really noticeable in a layout context. One thing puzzles me though: Most SDJR wagons seem to have had distinctive black ironwork, but the 1896 photo I was working from shows no. 1038 in all-over grey, with only the number/works plates picked out in black. It’s an official photo taken at Derby works, so perhaps not to be trusted? For the time being I’ve left the strapping in plain grey but if anyone has further info I’d be interested.

Thanks to all involved for helping out with the info used in this build, very much appreciated!