Now, own up: Who had dirty thoughts on their mind when you clicked to browse here?

With some idle time available, I remembered how I wanted to finish and post this small article on another piece of motive power for my Spanish section which had found its way to me several weeks ago. So, let's have a look at a Series 316 diesel-electric locomotive as operated by PW and logistics operator Azvi, a company based at Seville.

This locomotive is, to my mind, an excellent example for the diversity of origins of Spanish motive power in Ye Olden Days. It also will go on to show that as in most any other country, motive power retired from the state railway inventory continues to find a second life with private operators and permanent way builders. I needed to consult several different online sources in order to distil a comprehensive piece of information about these locomotives as my impression is that much information about Spanish motive power past and present exists primarily in print, and is not that easily obtained outside of Spain.

Reservations against the strongly authoritarian Franco regime notwithstanding and with the Cold War order asserting itself for the indefinite future, the Western world had come to accept Spain as a strategic partner by the 1950s, which did certainly play a role in the economic upturn taking hold of the country. By that time, the Spanish railway sector had seen innovations like the groundbreaking Talgo coach formations with their independent wheel running gears, at that time powered by custom-built single ended diesel-electric locomotives of American design and assembled by American Car and Foundry, with traction equipment having been provided by General Electric. These four locomotives were initially designated 1T to 4T but redesignated Series 350 in later years.

Aside from these innovative designs which continued to evolve over the following decades, the general task of replacing steam locomotives in all types of service remained as well. As a result, Renfe turned to foreign locomotive builders on various occasions as the domestic industry still had to catch up with a backlog of acquiring knowledge and skills.

To obtain mainline diesel locomotives for general freight work – also to be able to work passenger services if required – Renfe contracted ALCO to build an initial lot of 17 Co’Co’ configured diesel-electric locomotives based on the DL-500 design. Originally designated Series 1600 and later renumbered as Series 316 when standardised, UIC compliant running numbers were introduced in Spain, these locomotives were delivered in 1955 and 1956. Initially concentrated mainly in Andalusia, the last 316s were withdrawn from Renfe service in 1993. In 1957 and 1958, Renfe had also received 24 Series 1800 – later renumbered Series 318 – locomotives which were mostly identical to the 316s but had uprated power. The last 318s were withdrawn in 1994.

One interesting fact about the 316s and 318s is that in spite of their typical American style body with a prominent nose on one end and flat "rear" end, all locomotives except ex-1615/316-015 – which had been the first to be delivered – were actually double-ended, with a fully equipped cab present on the "flat" end as well. 1615 is also nicknamed "Marilyn", though I understand this nickname having been extended to the entire series and to be related both to their, shall we say, busty appearance and, indeed, suave vibrations.

The overall design is typical for ALCO diesel-electrics of the time, with a 1,327 kW prime mover and attached generator powering nose-suspended DC traction motors. Obviously, UIC buffers and draw gear were provided in lieu of AAR knuckle couplers, with the locomotives also being dually outfitted for vacuum and air brakes as the former type of brake was still used in Spain at the time they were procured. Although they were intended mainly for freight services, they were also outfitted with steam coach heating boilers. They were also outfitted with the typical Spanish lighting clusters, consisting of one large, central light – in this case consisting of two stacked lenses, replaced by a large single sealed beam lens on the 318 – and five marker lights.

Given that the class does enjoy much popularity within the Spanish railfan community, it is probably no surprise that Electrotren came forward with a H0 scale model of it.

Already released in various Renfe guises and with both the original silver livery with green trim stripes, the later dark green livery with yellow stripes and the 1980s/90s era "Taxi" livery of black and yellow, a special edition representing ex-1601, or 316-001, in its current appearance for Azvi was released for Basar Valira, who seem to be a fairly large hobby shop based, of all places, in Andorra. The DC version of it is marketed with reference 2408. 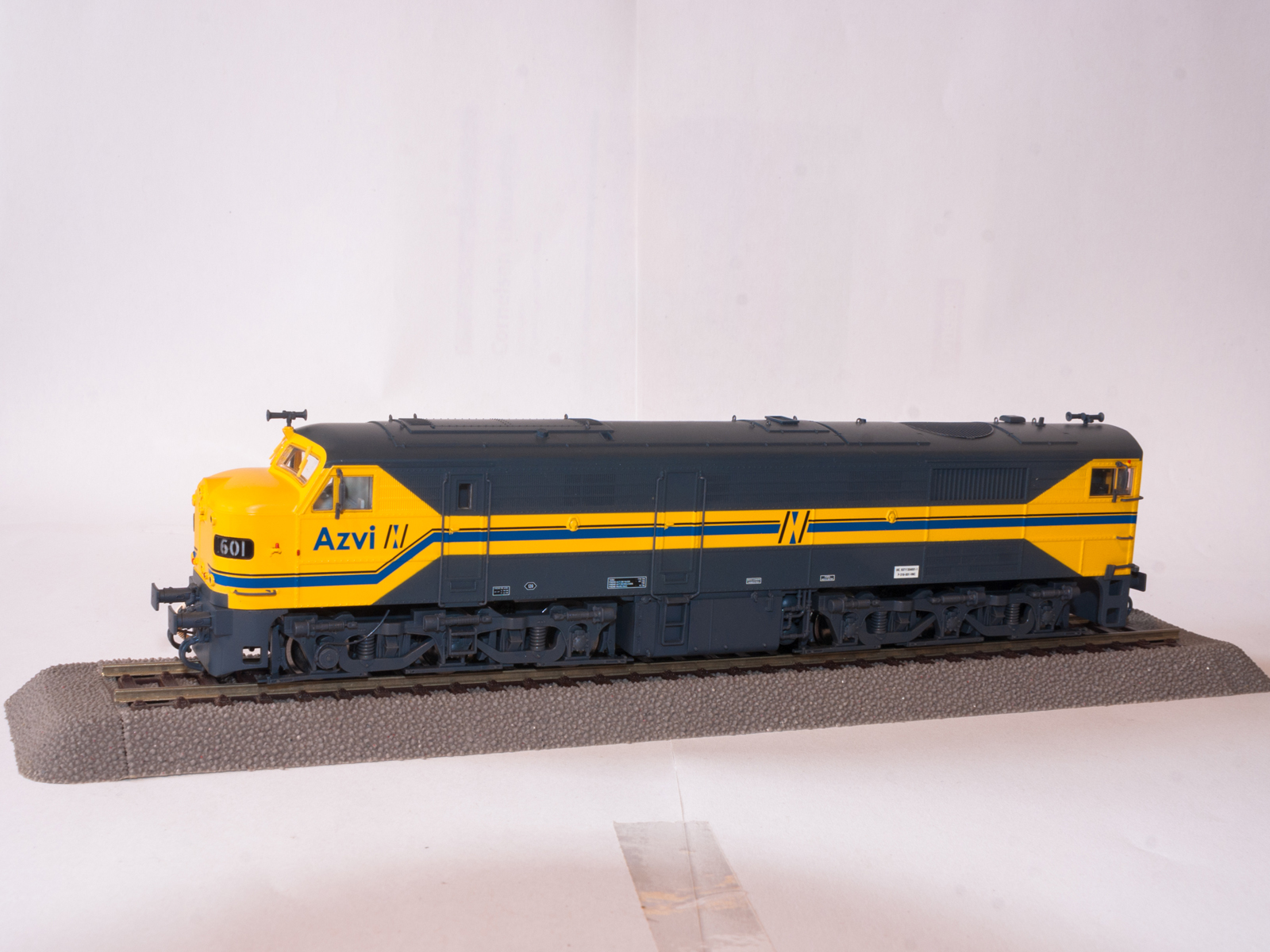 While I'm not directly familiar with the prototype as of yet, the Electrotren model does seem to give a good representation of the "Marilyns." There are not many detailing parts to be attached – in fact, only the air horns and rear view mirrors. 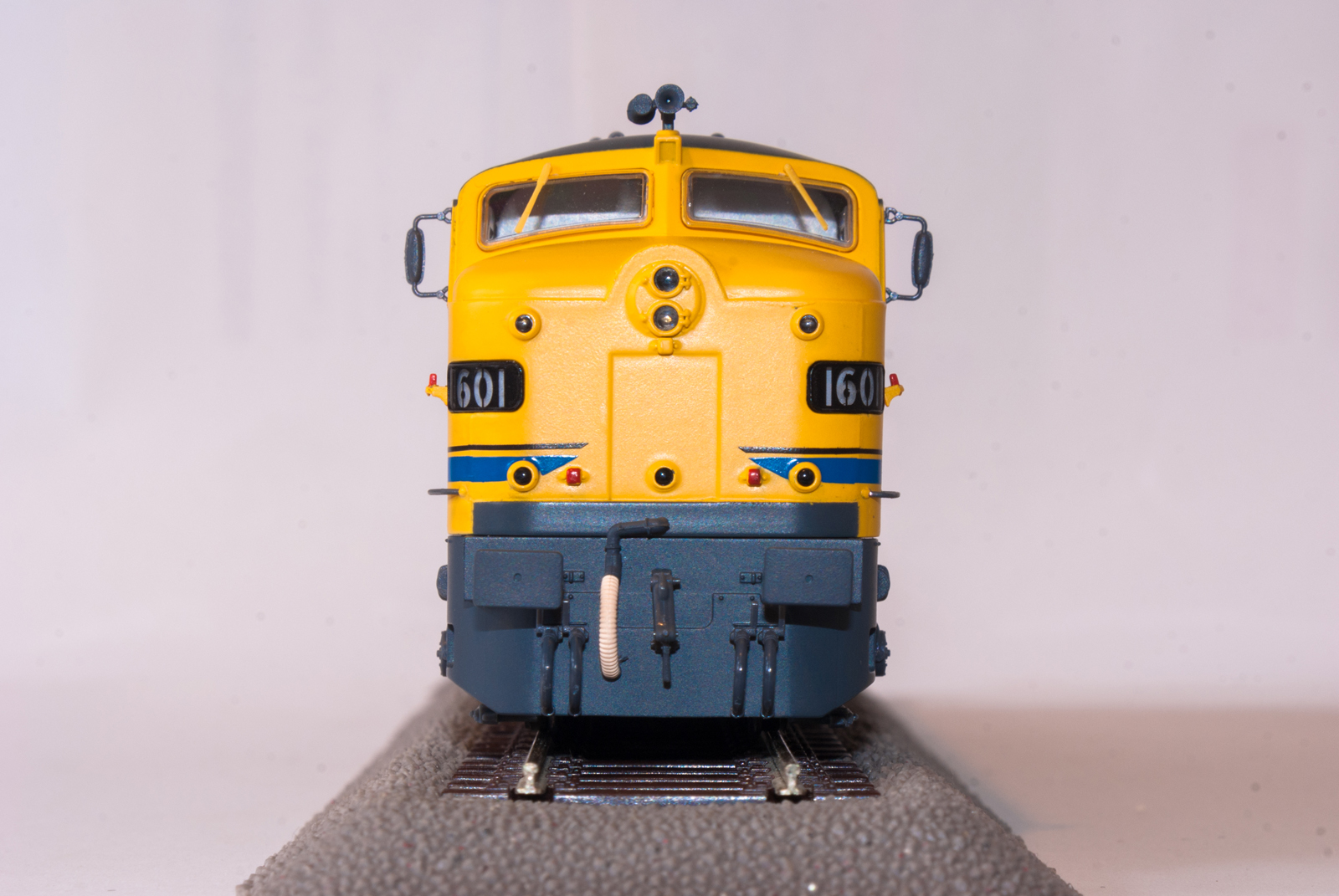 One thing I especially liked when prepping the model after unboxing it was that two pairs of bufferbeams are provided and can be swapped out easily in one piece – one with coupler cutouts and one without but with brake pipes and faux UIC couplers. 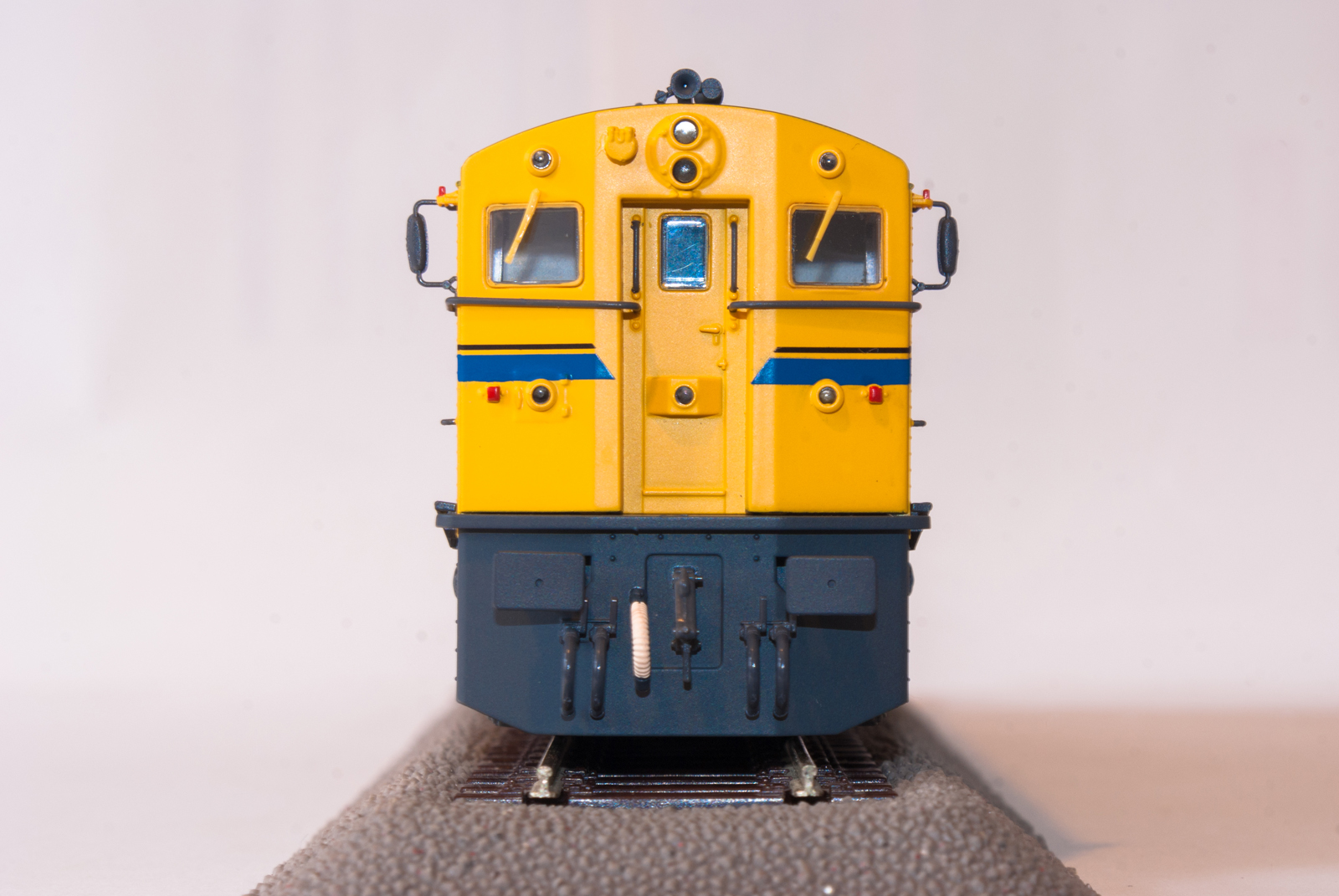 I do wonder if the rear cab on these locomotives was similarly spacious as the front cab as I would think the gangway door took away some of the available interior space! I imagine it should look interesting running these locomotives with the flat cab in front. 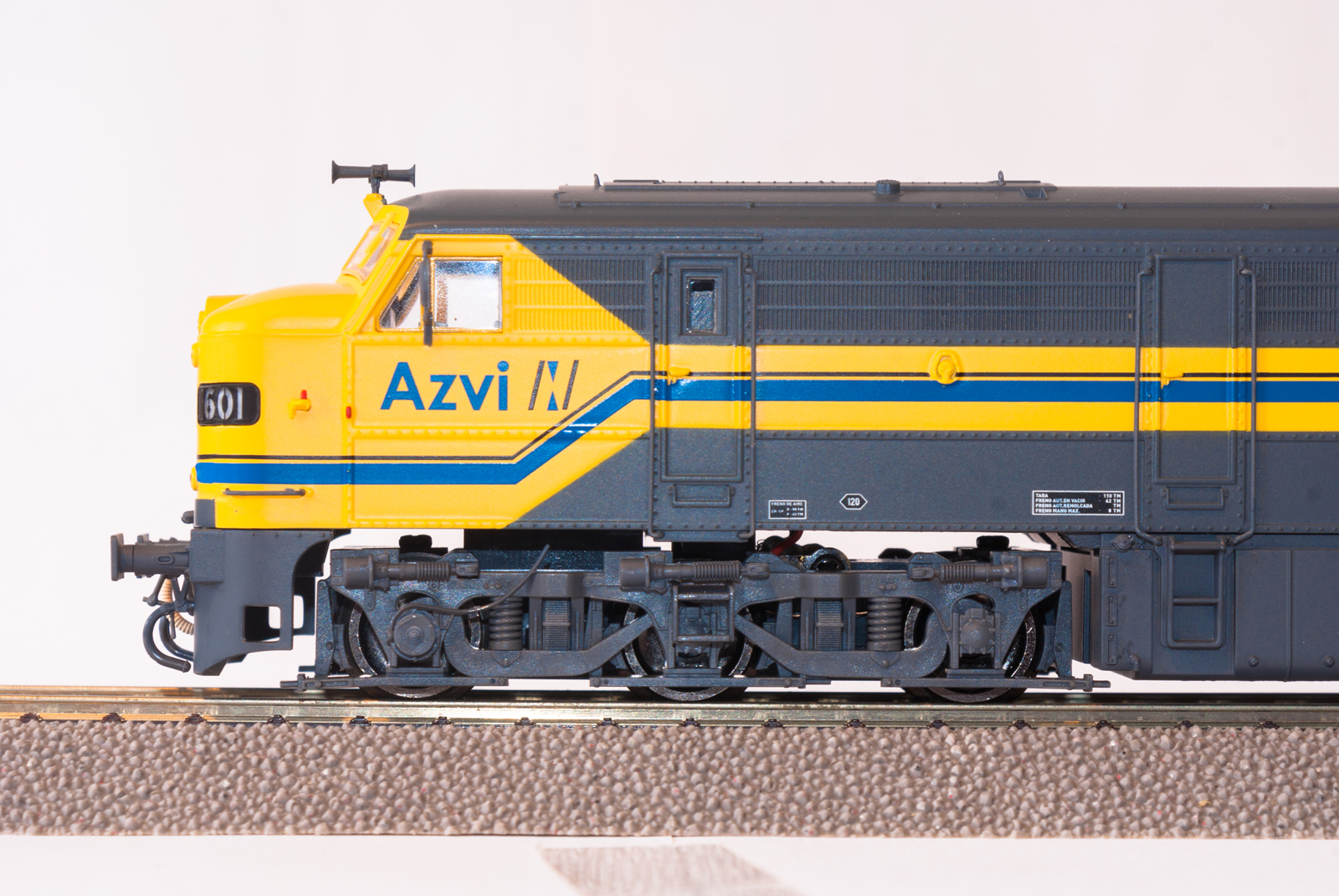 While looking at the bogies, my impression is that the frames seem to have been deliberately made of thicker plastic so as to give the appearance of broad gauge bogies, although the model is gauged for regular 16.5 mm H0 scale track. Also note there being separate access doors for the front cab and to the engine room.

The braking information lettering is formatted a bit differently on these locomotives. Next to the forward door, there is a table specifying the 316's air braking gear to be based on a Westinghouse type valve with settings G and P, and braking weights of 58 tonnes for "G" and 62 for "P". Next to this, the rhomboid table indicates the maximum running speed of 120 kph.

The table next to the centre door gives further braking gear indications: 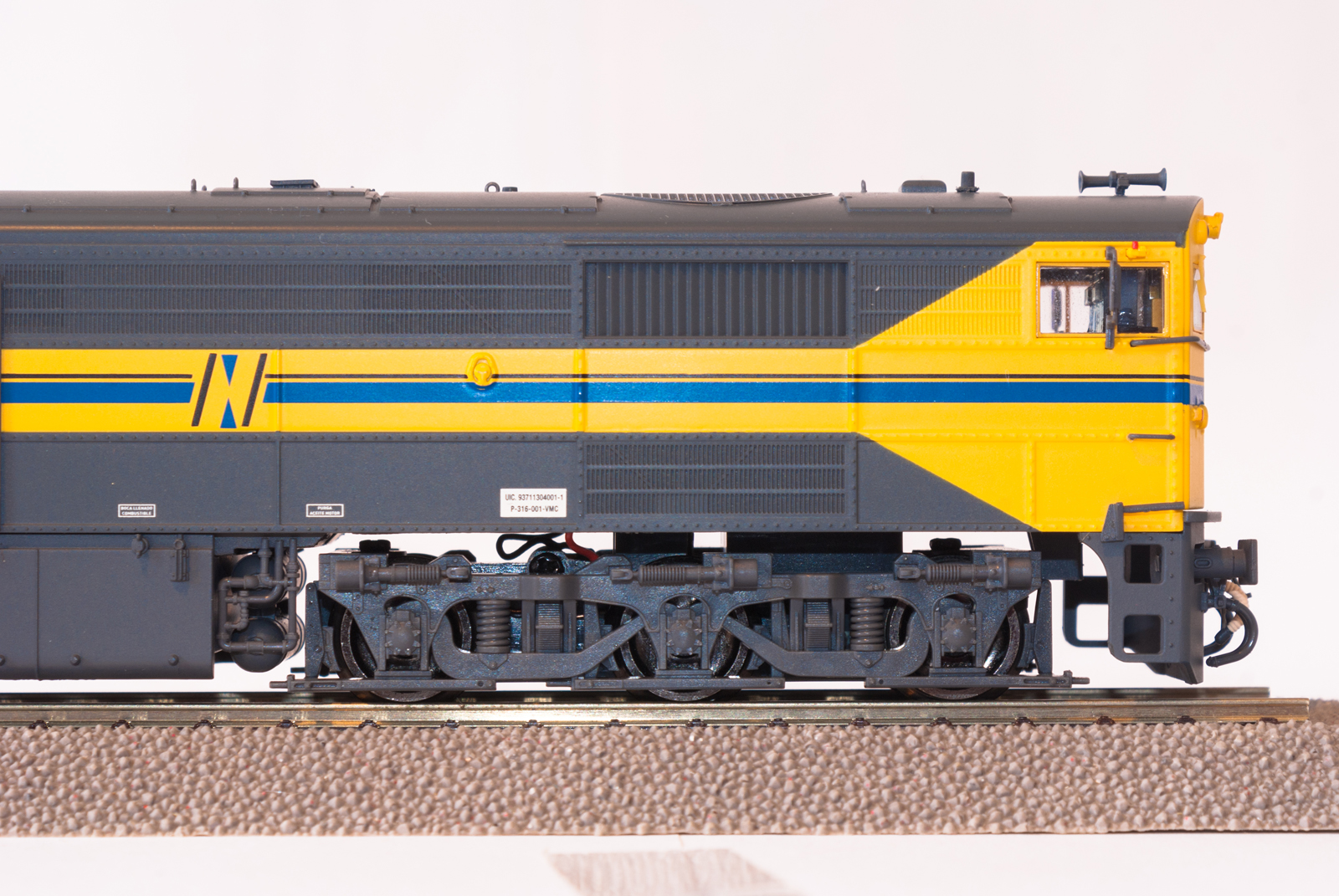 Further lettering towards the rear cab includes indications for fuel filler and engine oil drain cock, as well as a table with the locomotive's TSI formatted running number: 93 71 1304 001-1 – highlighting that class numbers within the UIC-TSI system do not necessarily correspond to class numbers existing in the older numbering systems utilised in individual countries.

In my impression, the model's paintwork and lettering is clean and crisp, and with a suitably flat finish that does not look too plasticky. 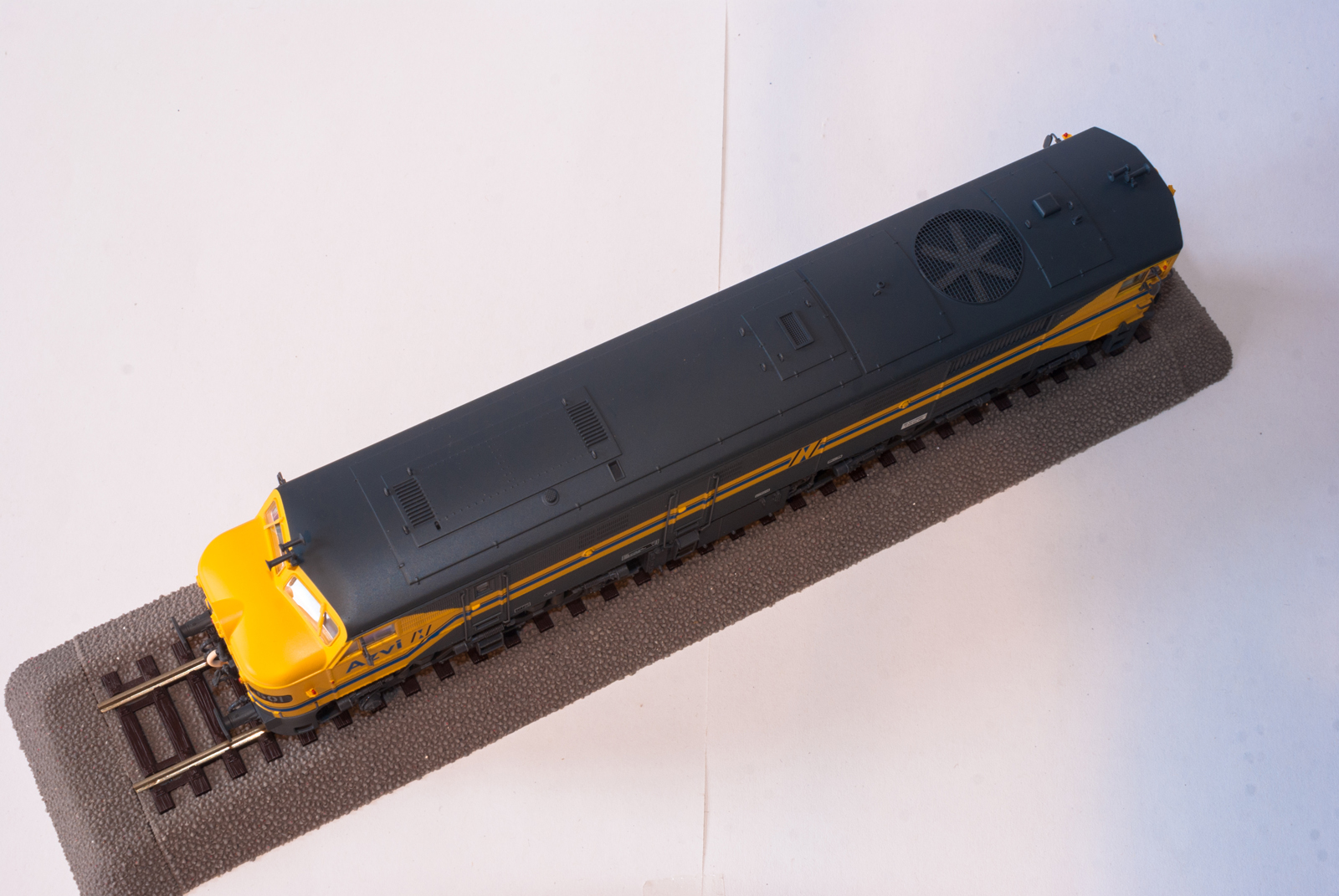 I do wonder if the model could further profit from replacing the various grilles with brass etchings or some such materials from the aftermarket sector… The prominent fan towards Cab 2 is non-moving and perhaps that, too, could be an item for further tweaking? Dangerous thoughts, I know!

And, as usual, a Youtube video for the finishing touch. Thanks for reading!