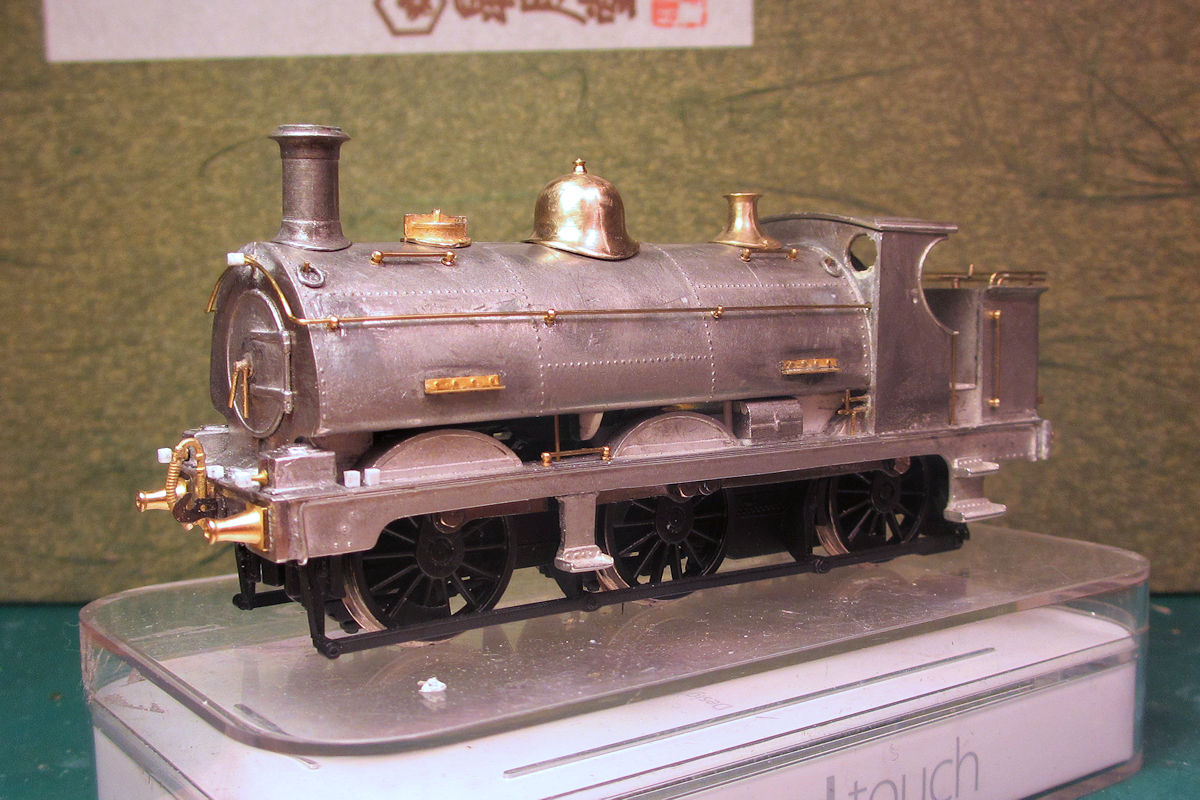 I’m building a GWR 1854 class saddle tank in 1900s condition, using a modified and detailed South Eastern Finecast body kit on a Bachmann 8750 chassis. The build is also in my workbench thread, but that tends to be a rather meandering discussion, so this is a summary of the main steps without the diversions. 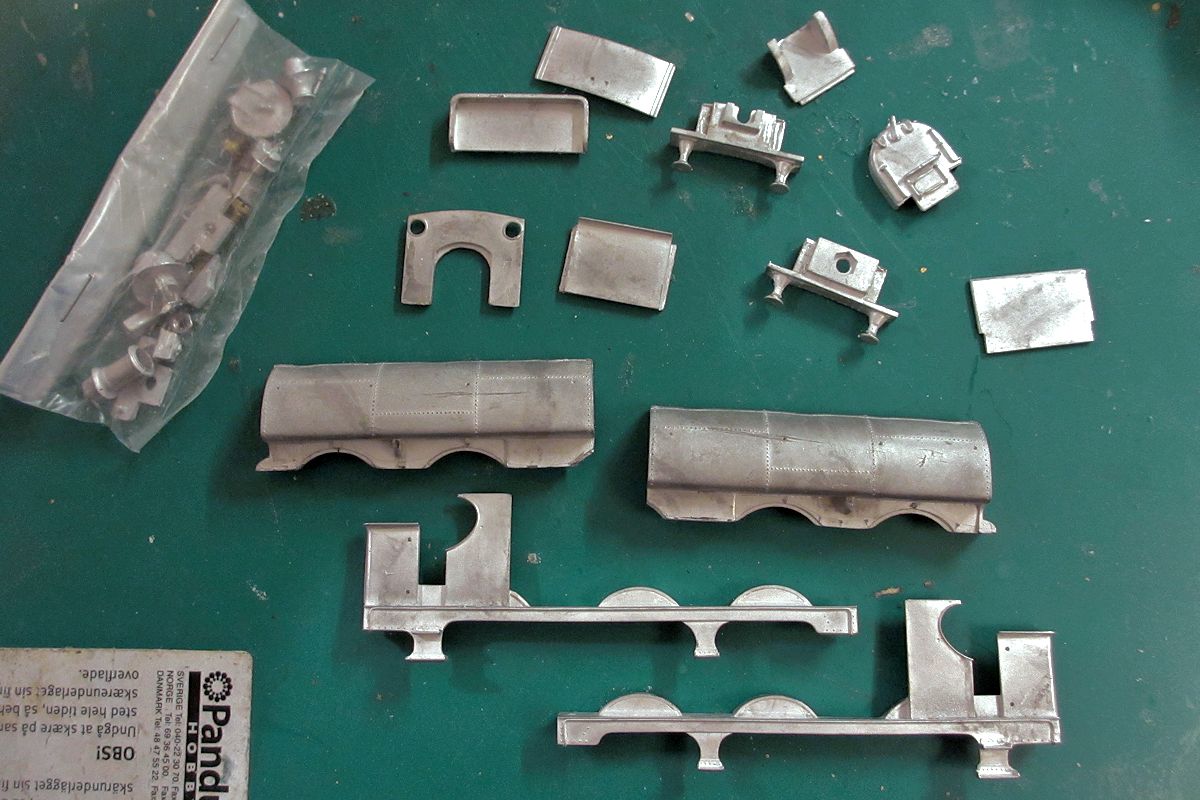 I bought the kit part-assembled, but a bath in hot water dissolved the glue and allowed me to break it down into its main components. 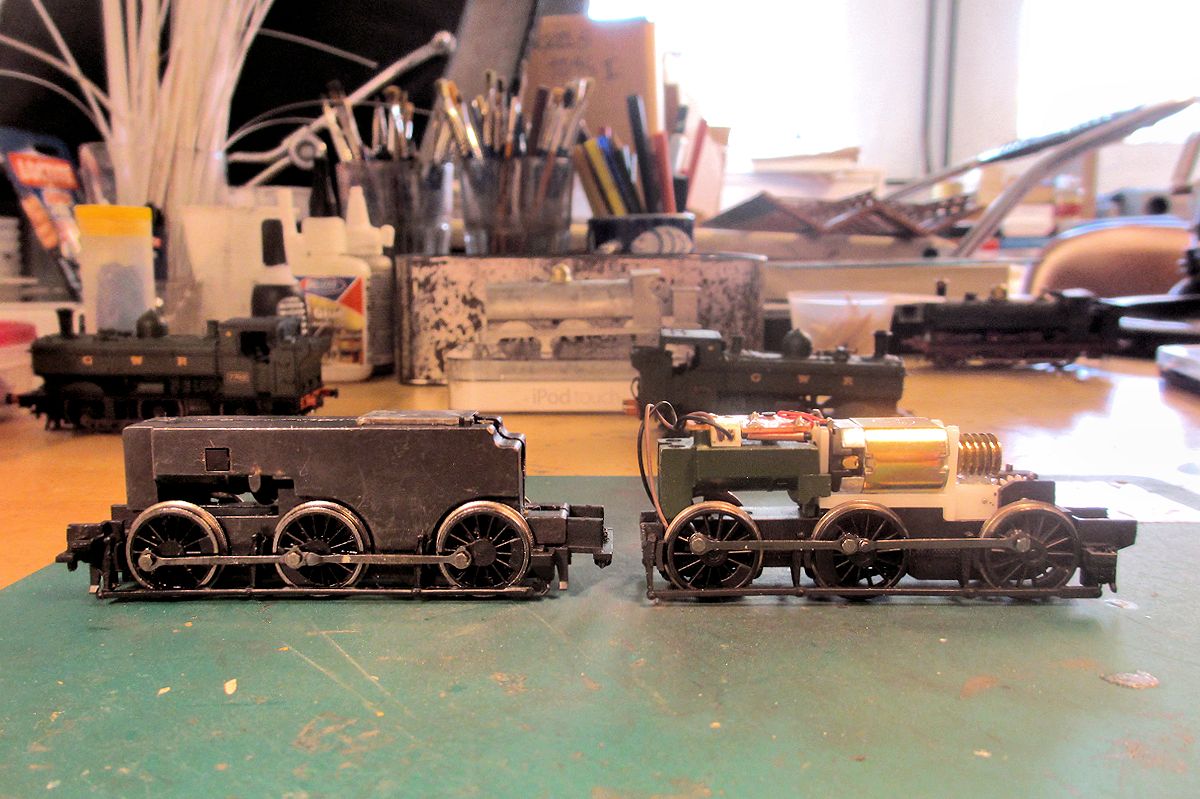 The Bachmann chassis I'm using is the version for the 8750 model, seen here on the right (my loco ref was 32-200, I think the recent 57xx model also uses this chassis). Note that older versions of this chassis (seen on the left, my loco ref was 31-900) are higher and the chassis block is longer, so is less ideal for conversions. 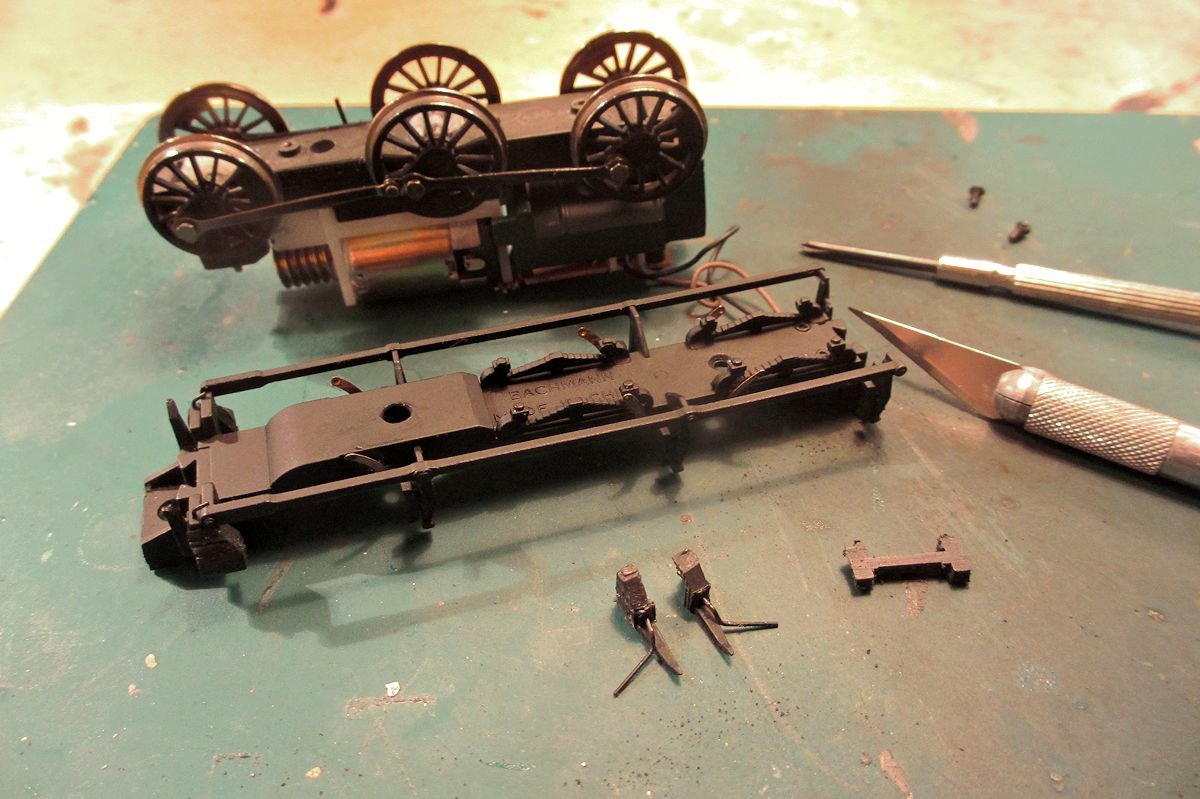 I wanted to avoid modifying the chassis more than strictly necessary, so that it could be replaced easily in case of a failure. The only chassis modification was therefore to remove a section off the front to allow the kit to fit over it. 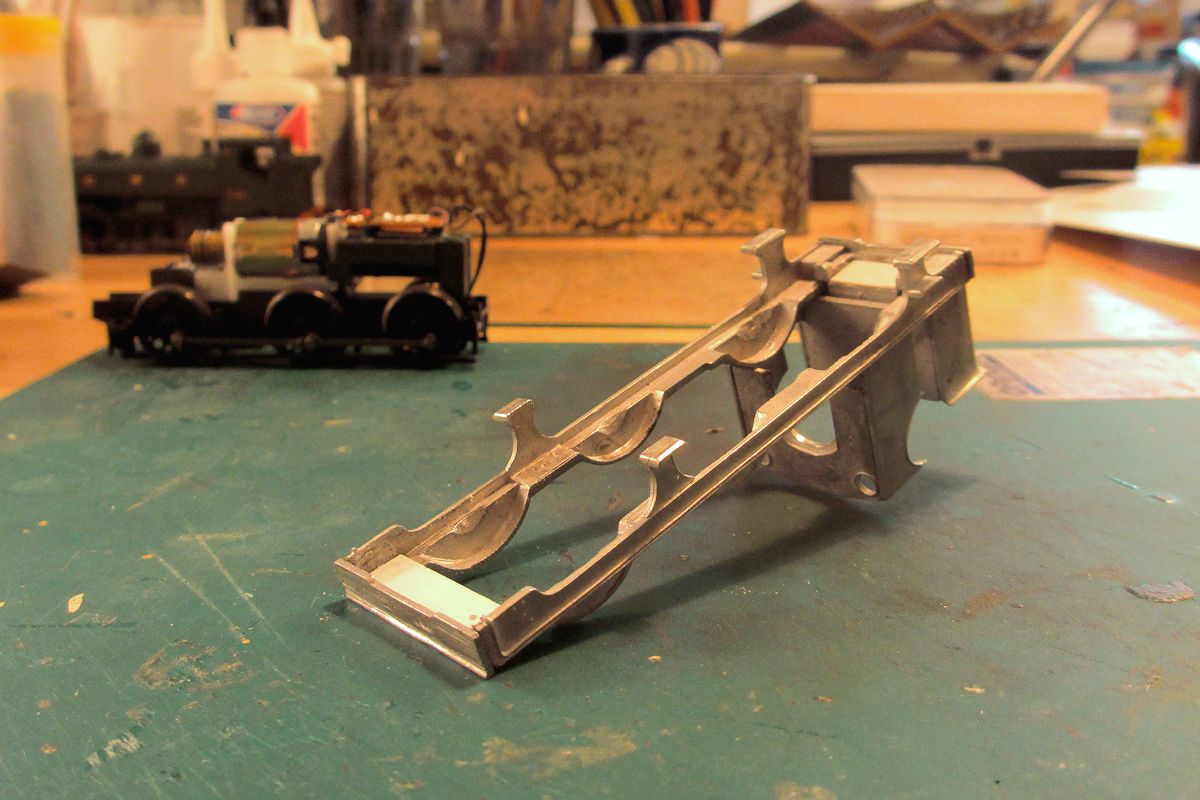 The body castings require more work. The locating lugs on the side frames and buffer beams were removed, and about 1 mm was filed off the central section of the footplate and splashers each side to clear the motor. Plastikard was used front and rear to get the correct ride height. 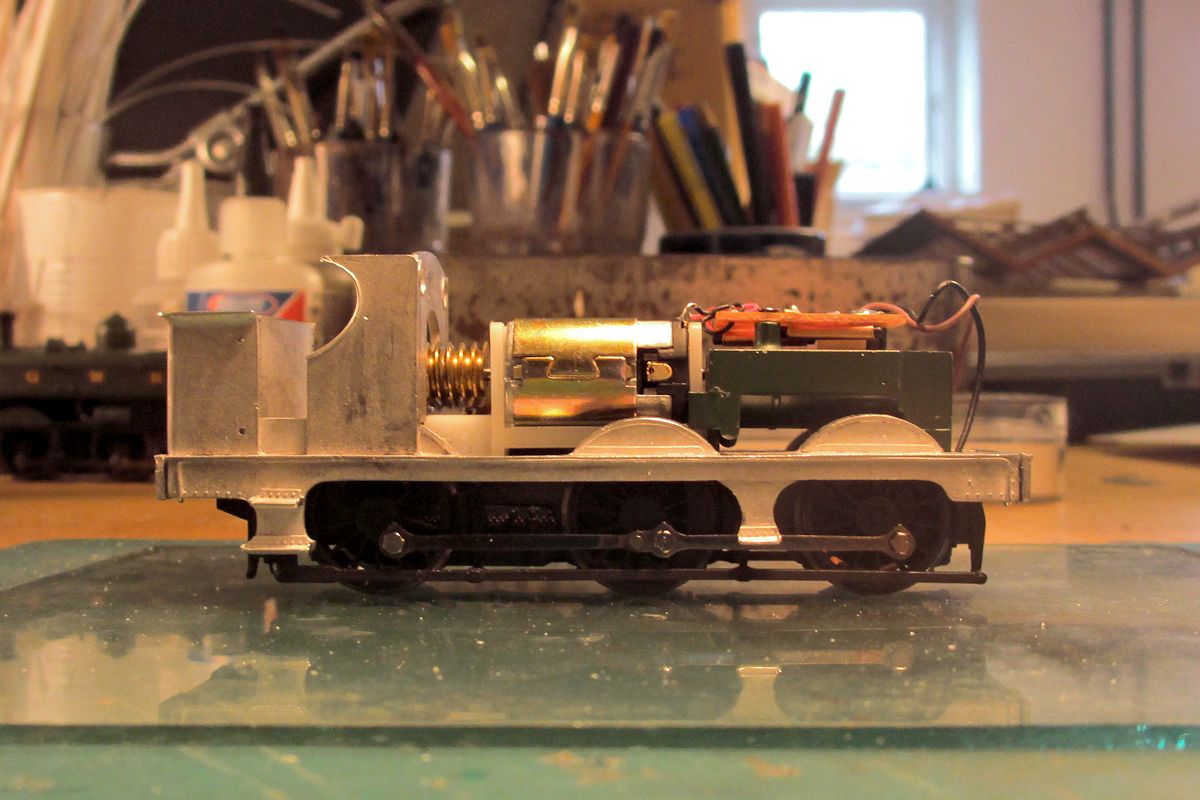 The body and chassis assembled. The two front splashers are 0.5 mm too far out. However with careful positioning of the body it is barely discernable, so after mulling it over I decided to accept it. 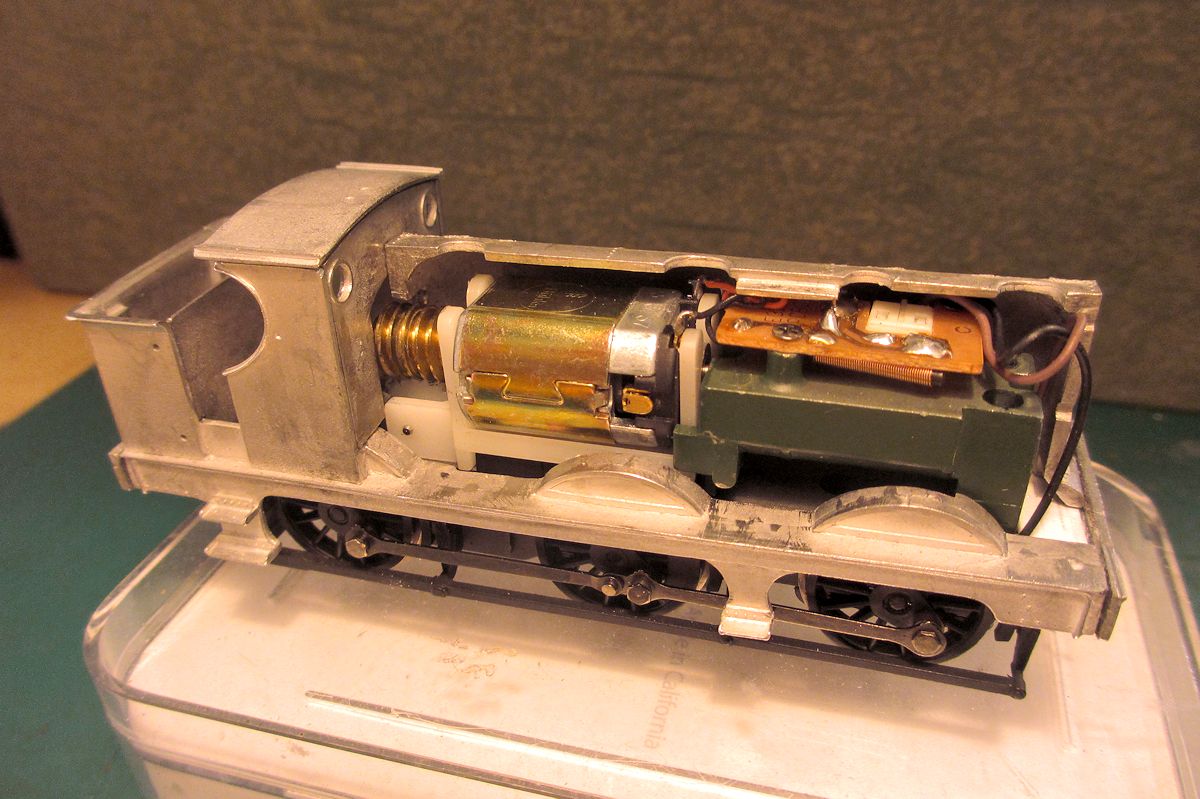 The tank sides fit neatly over the motor. The two tank halves were the most work intensive parts of the kit. The “skirts” need to be cut away… 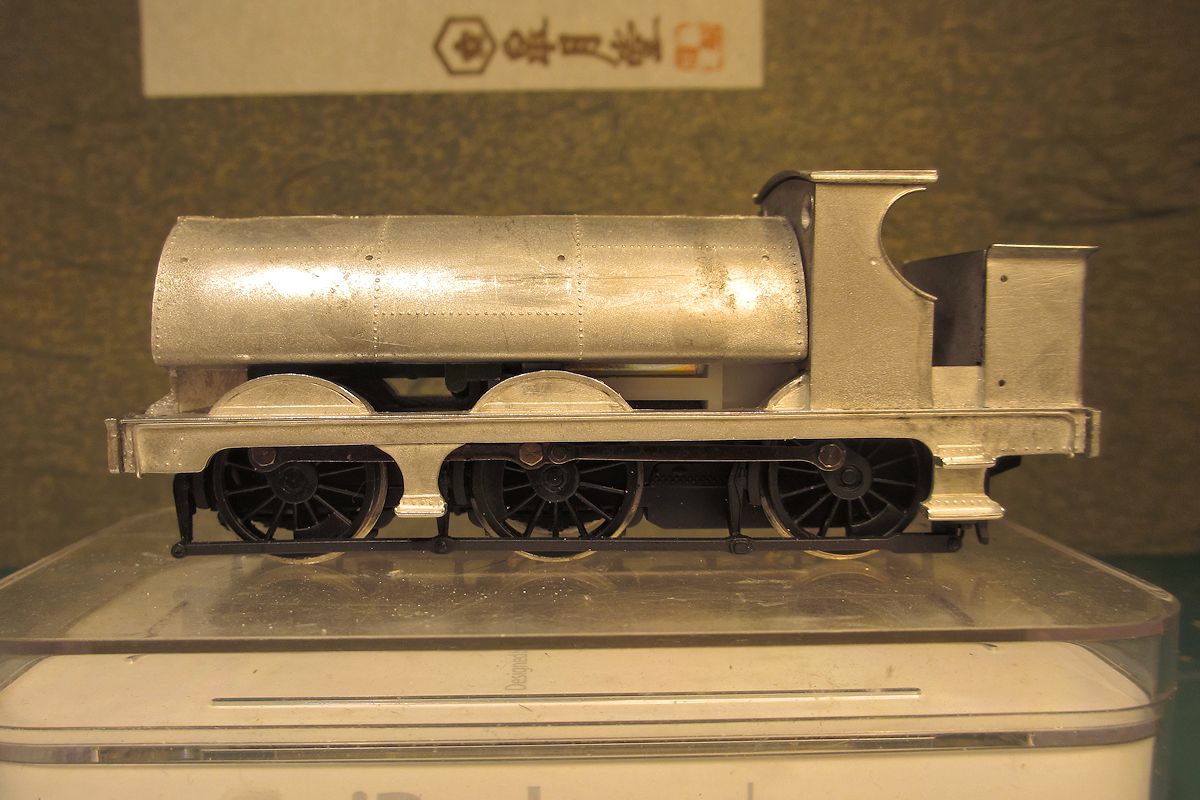 ...allowing daylight under the boiler… 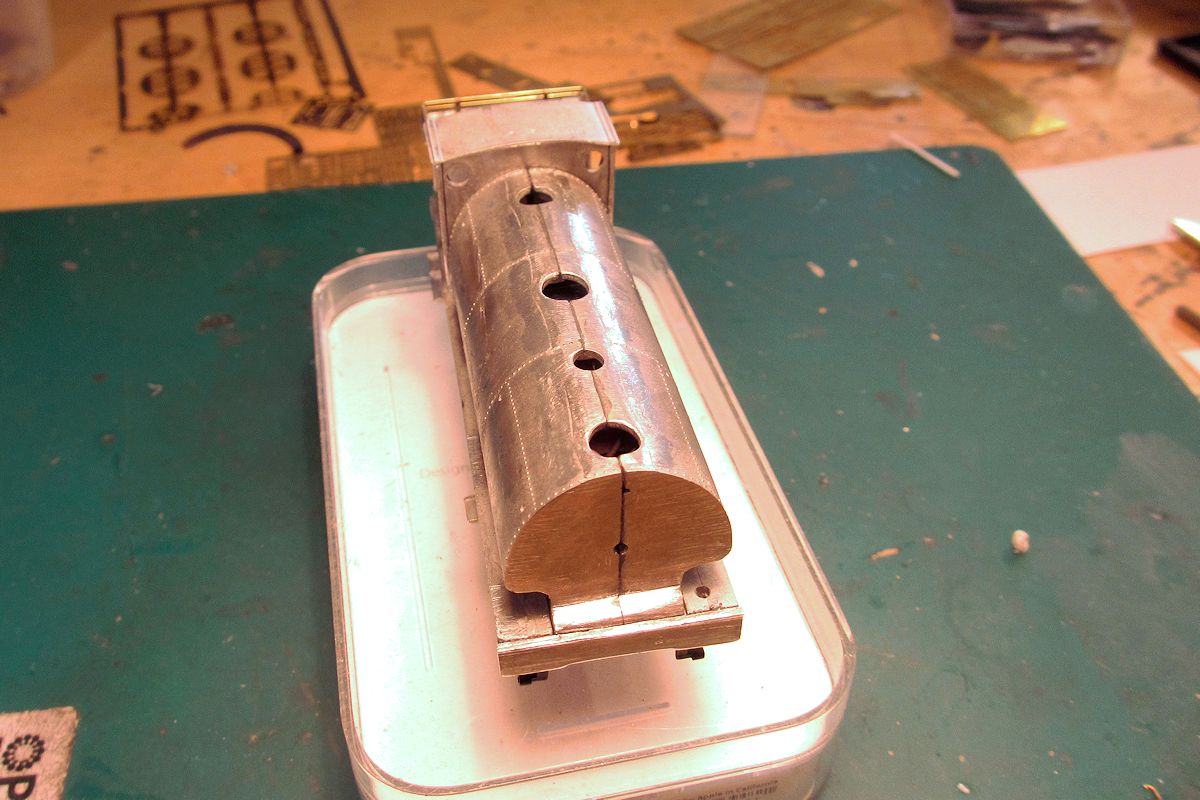 …followed by much filing and filling to get the two halves to fit together. 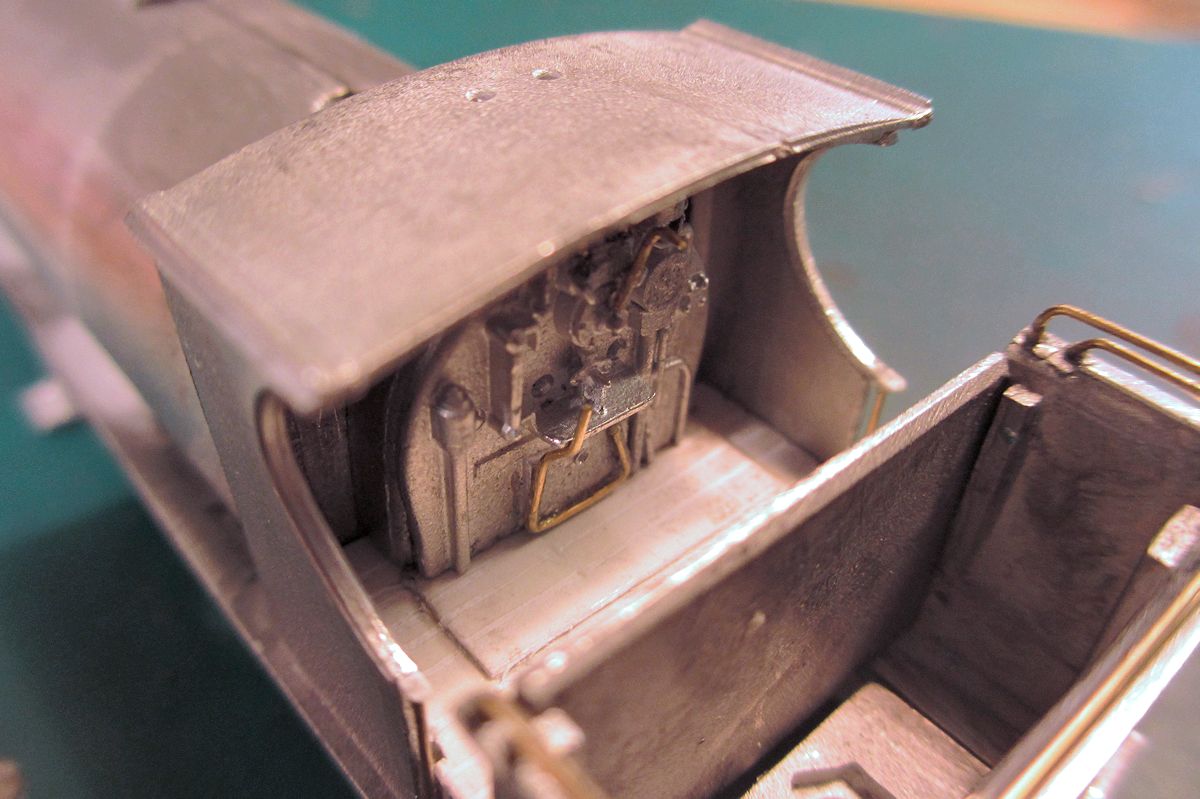 The motor intrudes slightly into the cab, so the backhead was moved 1 mm forward and a center section of the floor raised slightly. 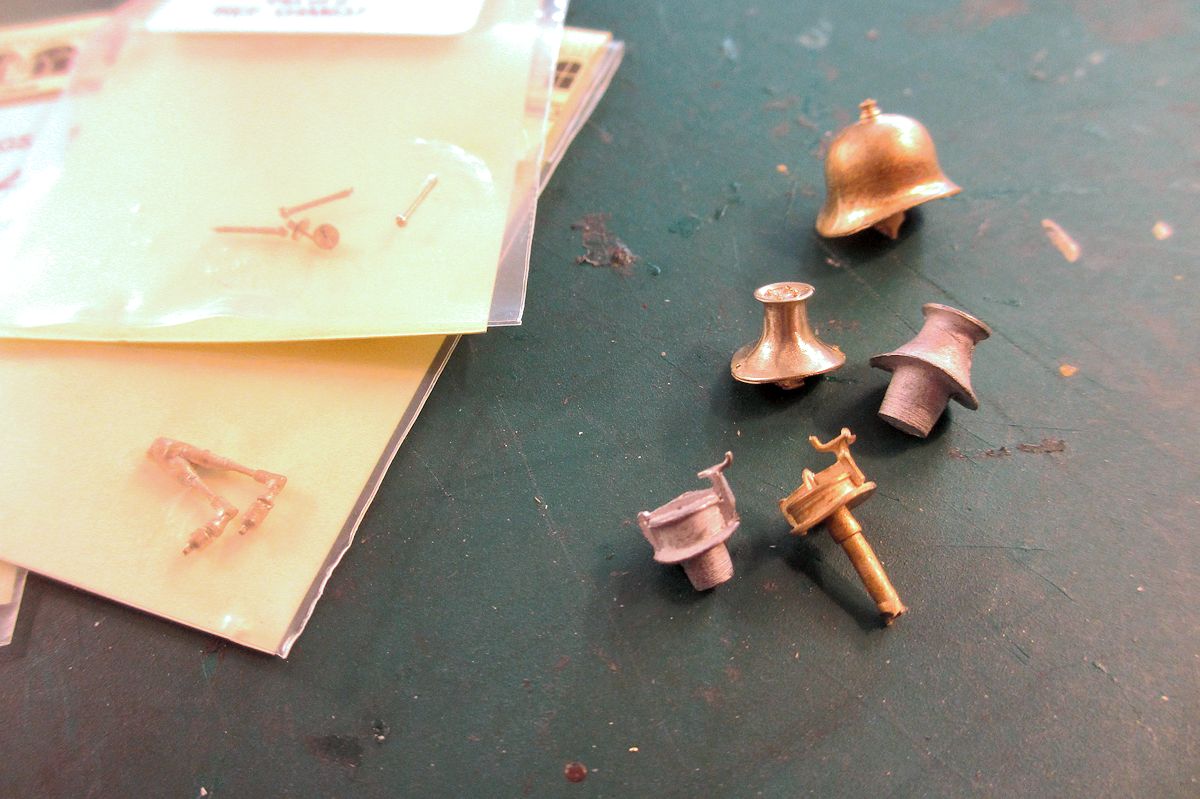 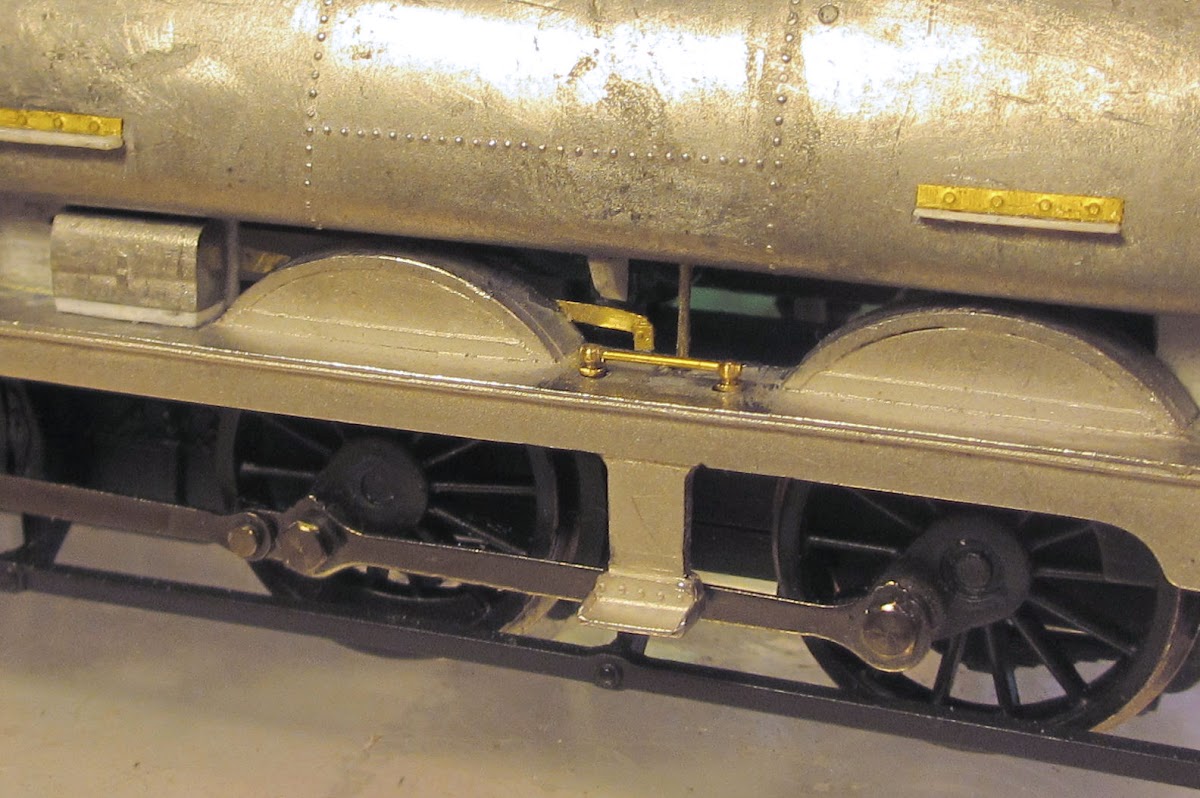 Other details were scratchbuilt from bits and bobs. The tank steps were later redone enitrely in brass with tabs to secure them. The footplate steps need filing to the correct straight shape as seen here. 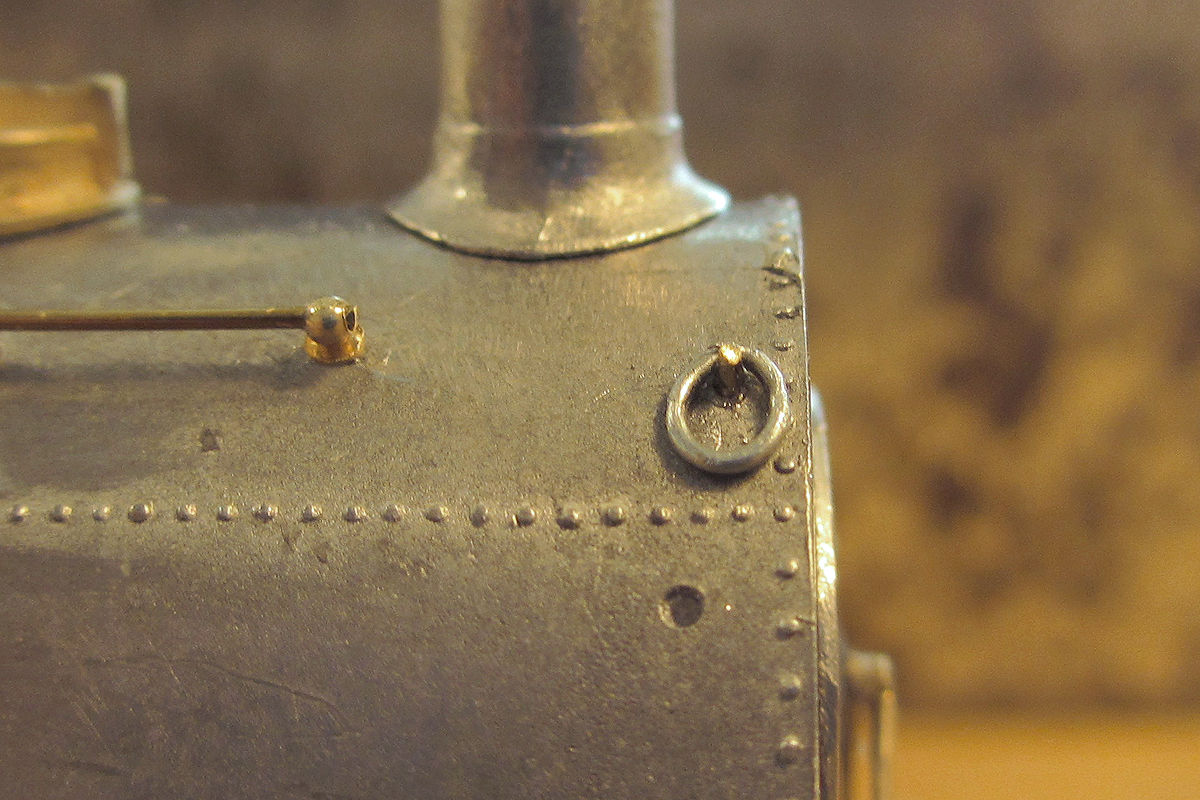 Liftings rings, made from soft wire wrapped around a brush handle and squeezed to shape with pliers. 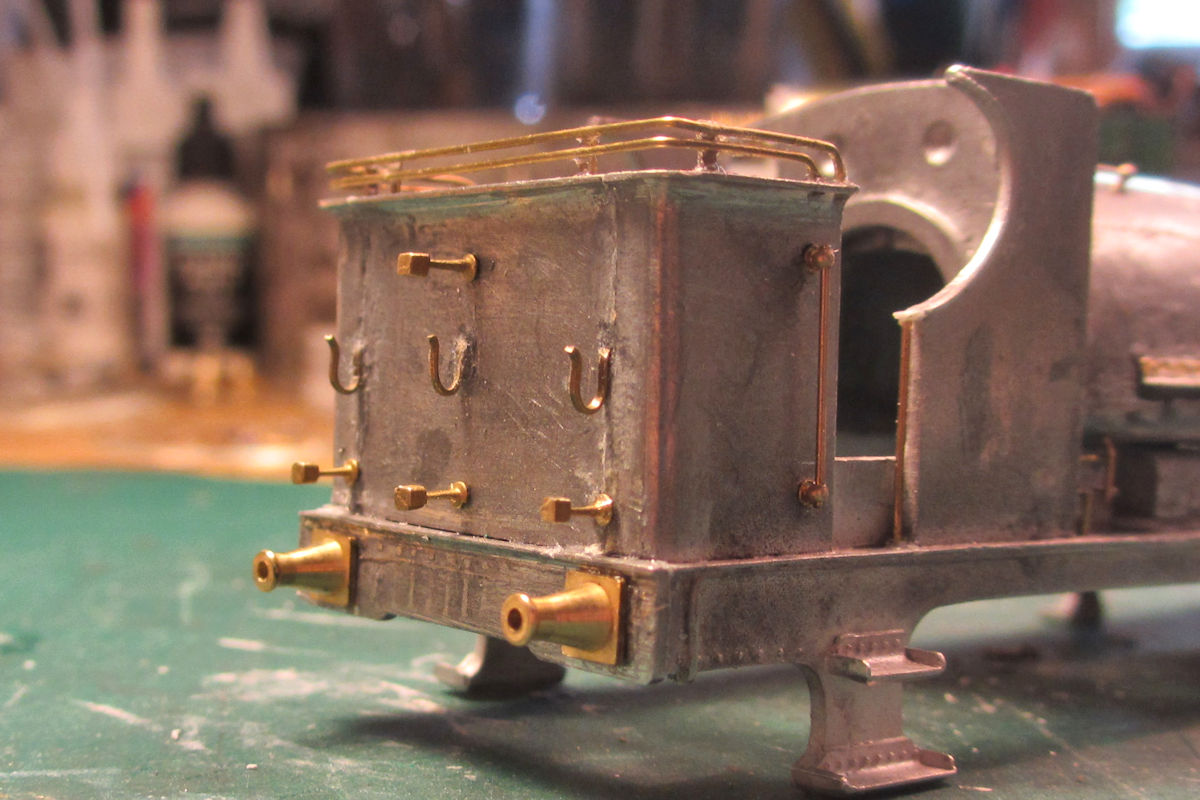 Coal rails made from wire, and fire iron hooks bent to shape from flat brass strip. The early lamp brackets are from the Broad Gauge Society, and the buffers are Alan Gibson. 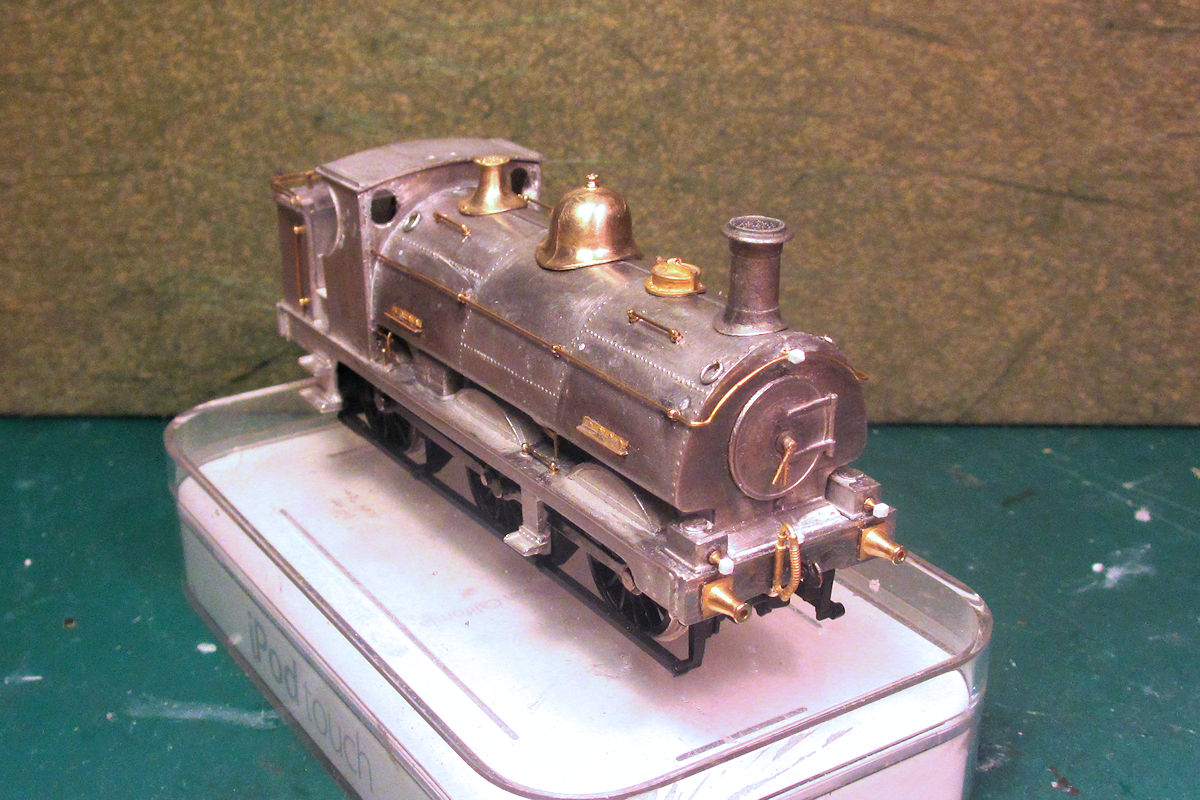 While the main build was fairly quick, the detailing has been time consuming. 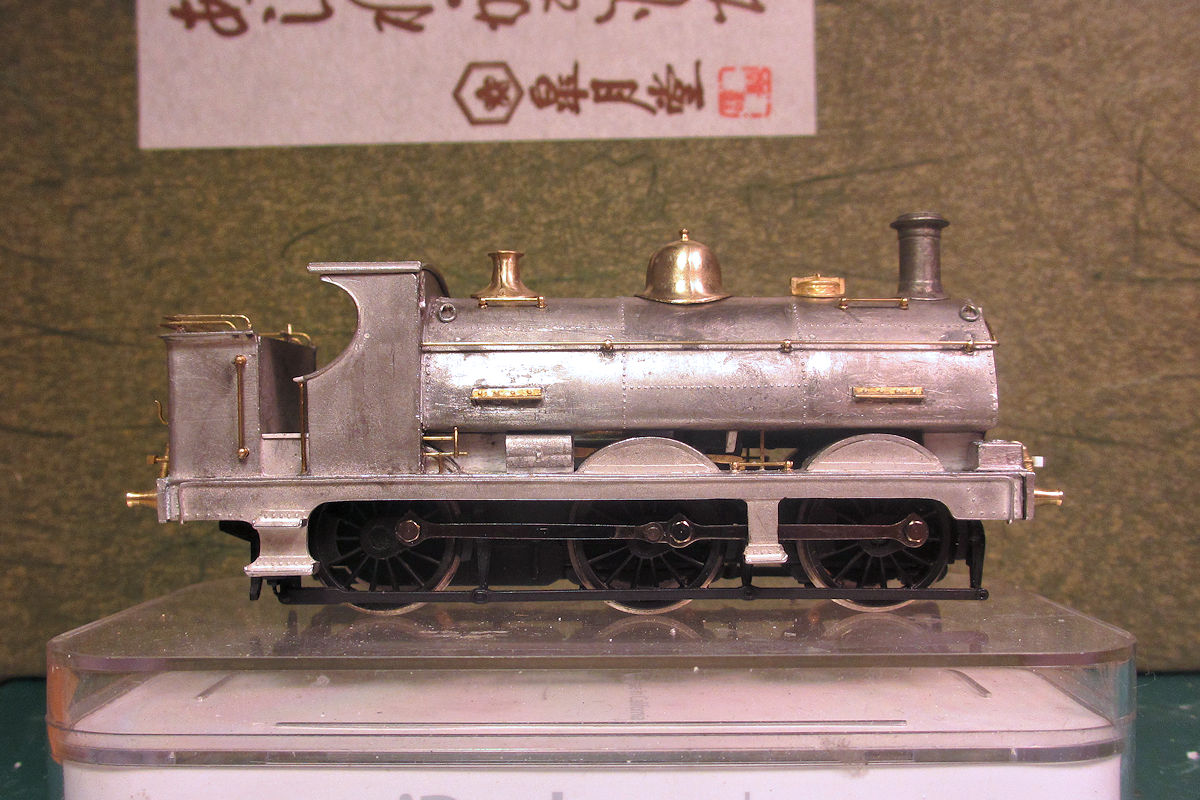 So here she is, almost ready for a good scrub and then some primer.