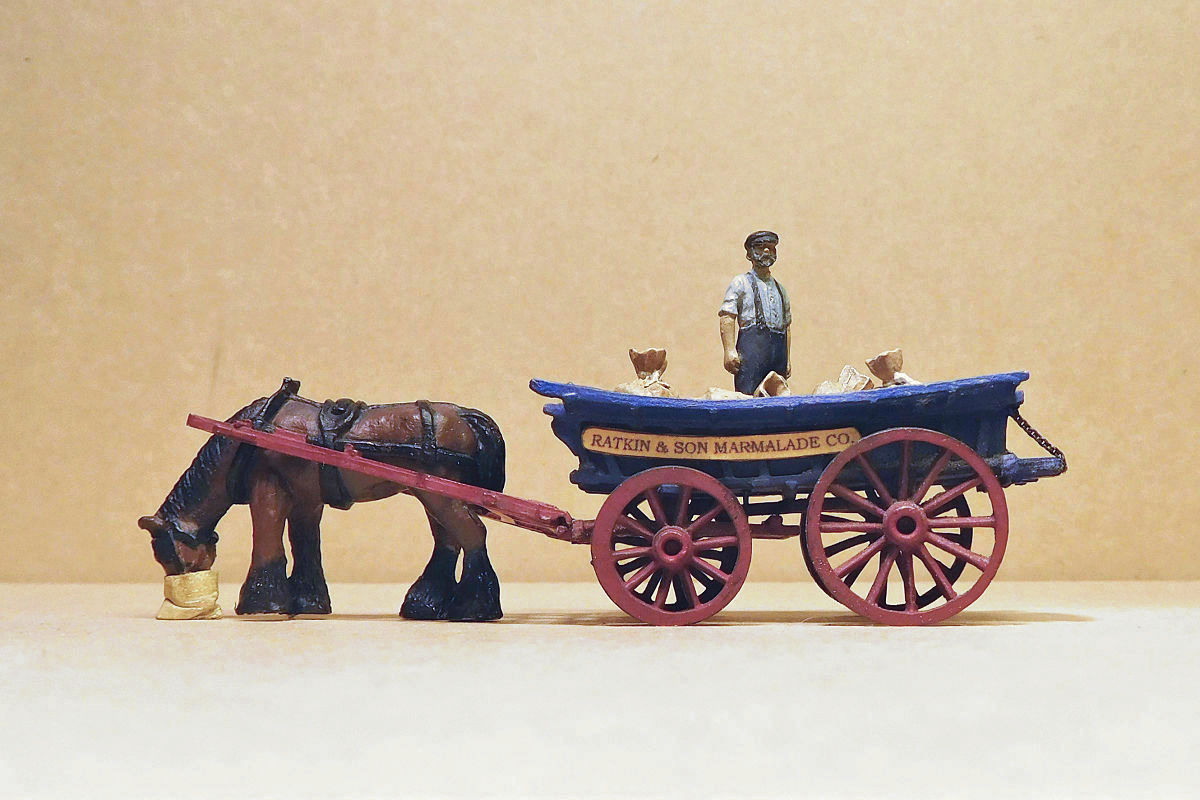 Here's another contribution to the RMweb "Horse Drawn Weekly" as Dave calls it. My efforts don't even get close to his superb models, but a horse is a horse as they say in Farthing. Today's subject is a wagon from Ratkin & Son, makers of finest jams and marmalades (or so they claim).

The build was inspired by scenes such as this one, showing the GWR sidings at Henley and Sons cyder works (sic) in Newton Abbot, October 1908. Source: Getty Images. Embedding permitted. https://www.gettyimages.ca/photos/cider-gwr?phrase=cider%20gwr&sort=mostpopular#license 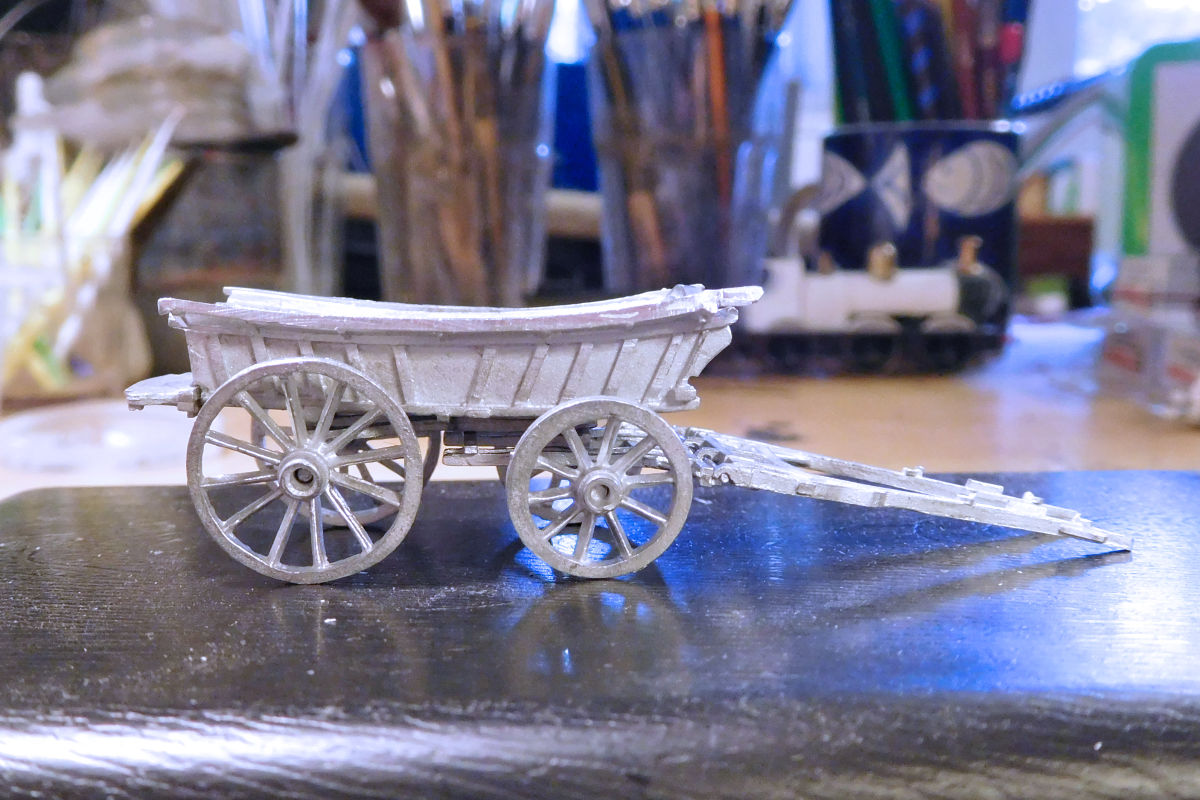 The wagon is a straightforward build of a Dart Castings kit. 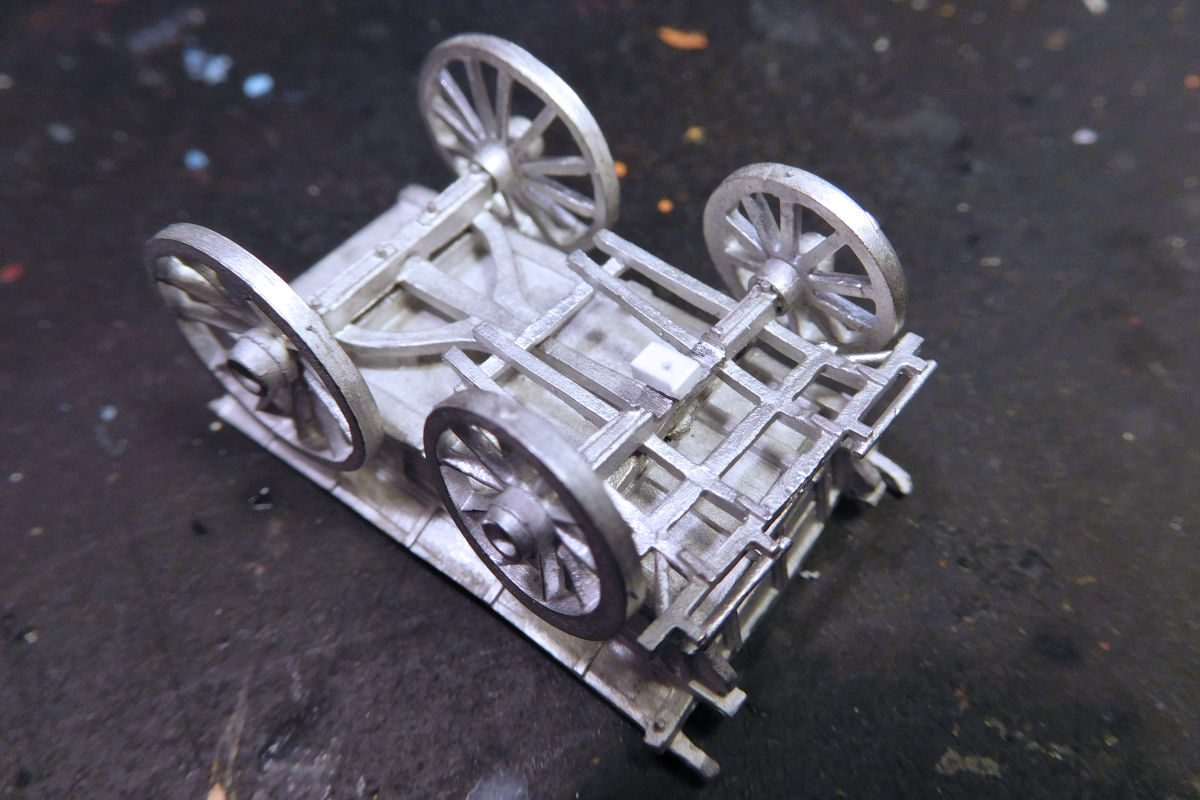 As usual I modified the parts lightly to allow the front axle to rotate freely, which adds a bit of flexibility when positioning the wagon. 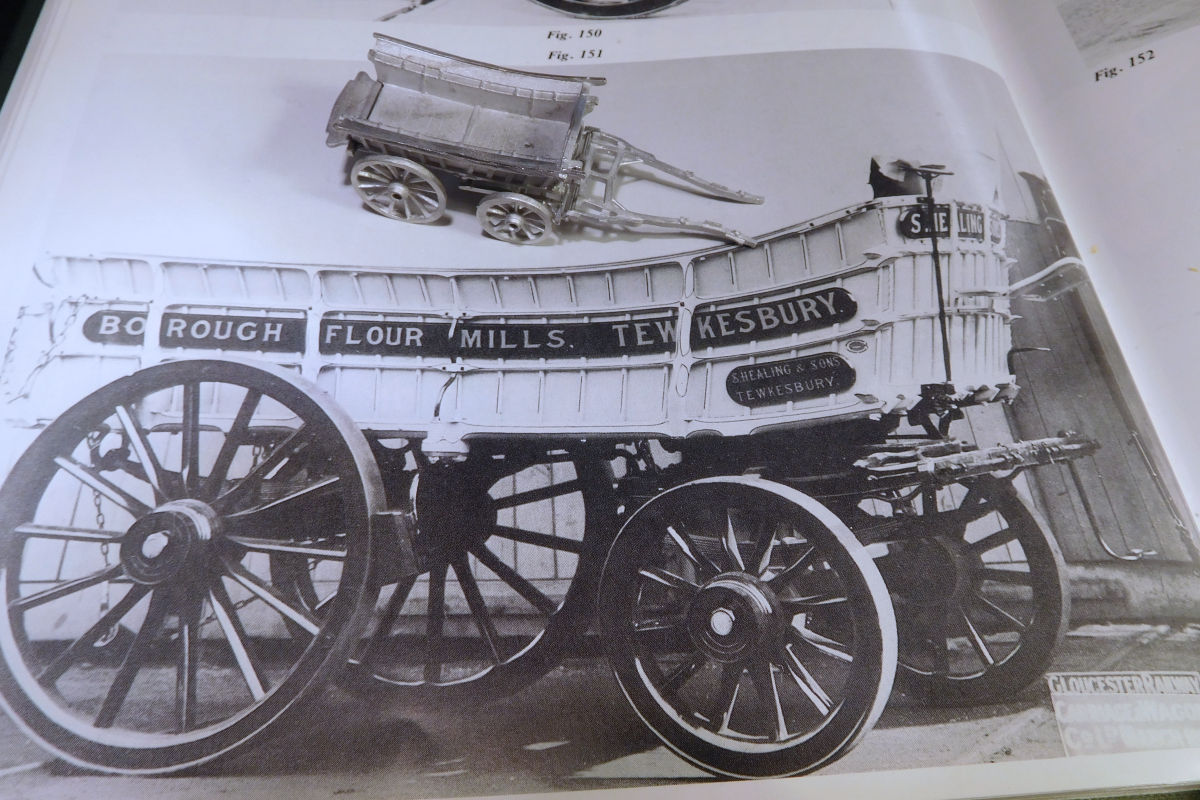 I don't know whether trade/industry wagons followed the local styles of farm wagons. If so I'm in trouble, as my model isn't a Wiltshire type, where Farthing is located. An excuse could be that it was acquired secondhand from elsewhere, or built to the standard design of a large manufacturer. The example above was built by the Gloucester Wagon & Carriage works (who also made horse drawn vehicles). 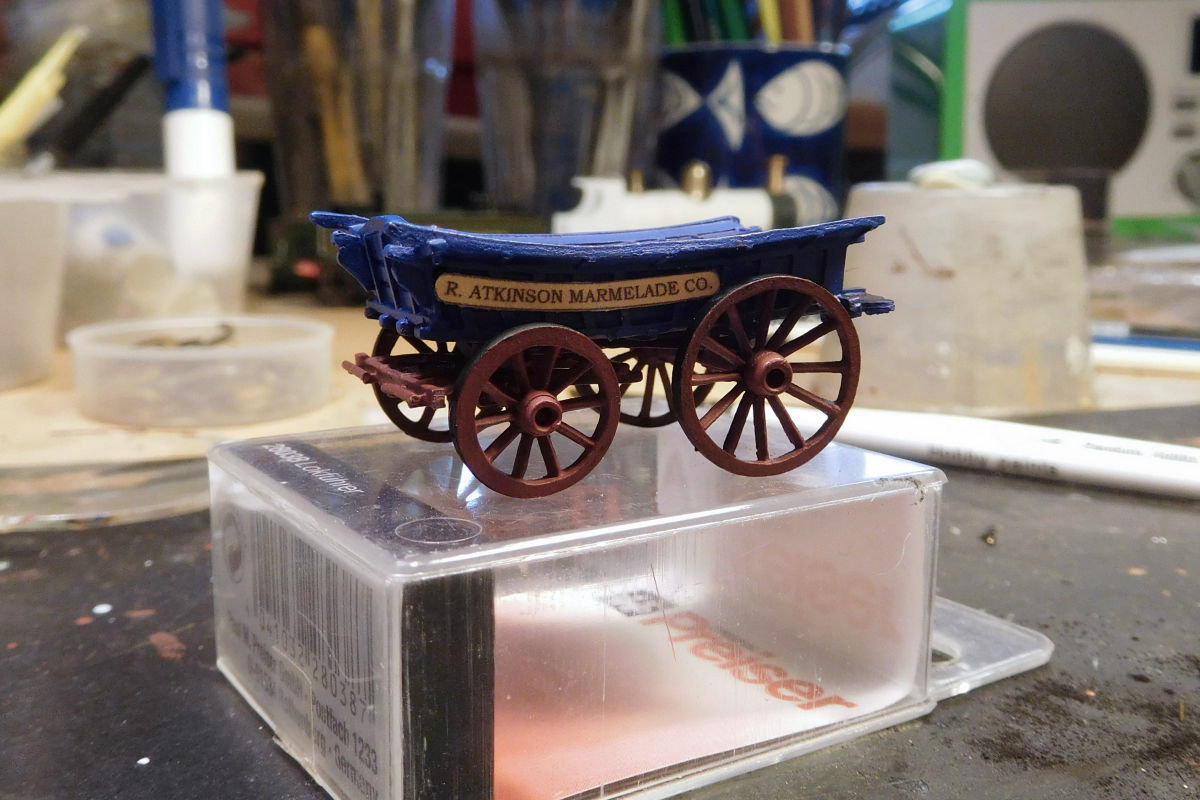 The style of the wagon didn't allow for lettering directly on the sides, so I made a sign. Whilst browsing a discussion of marmalade on CK's Bethesda Sidings thread, I realized that I had used the Danish spelling. It's the little details that reveal who we are, as Poirot would have said!

Anyway, a new sign was made, and I took the opportunity to modify the name. 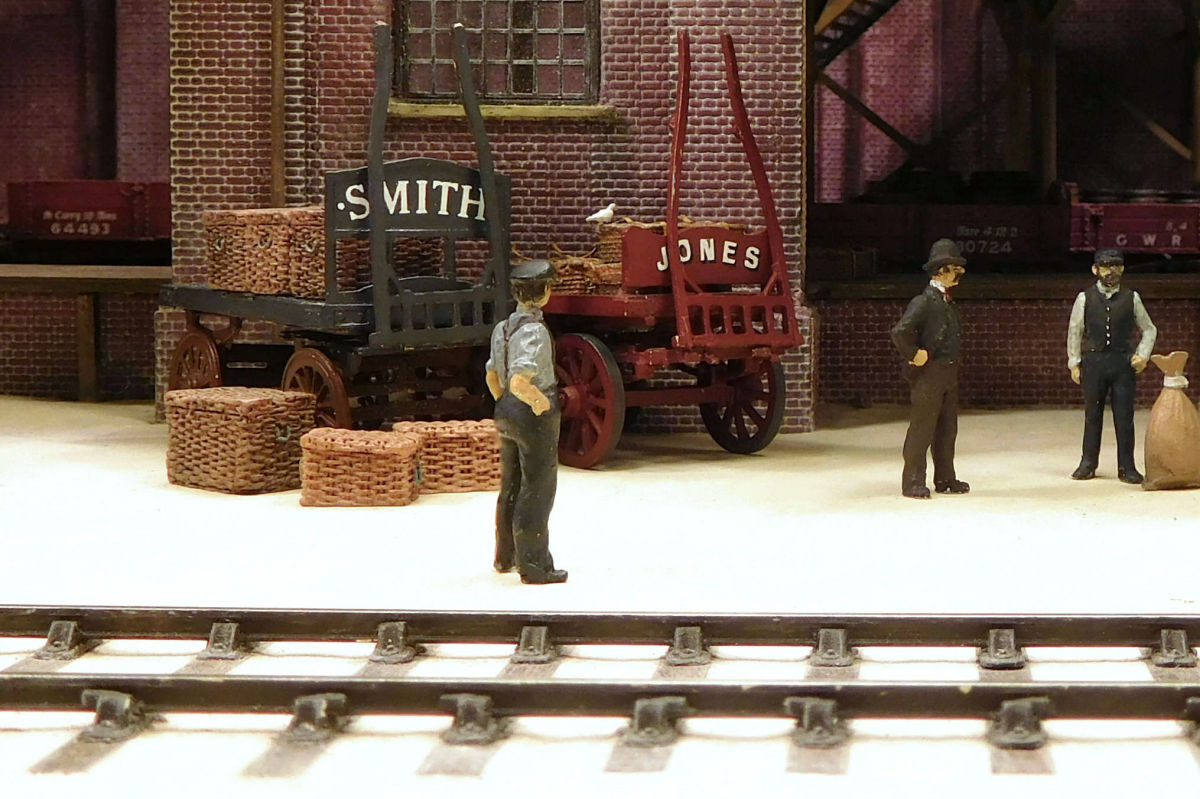 If you're wondering about the point of the name, there's a clue in this photo. 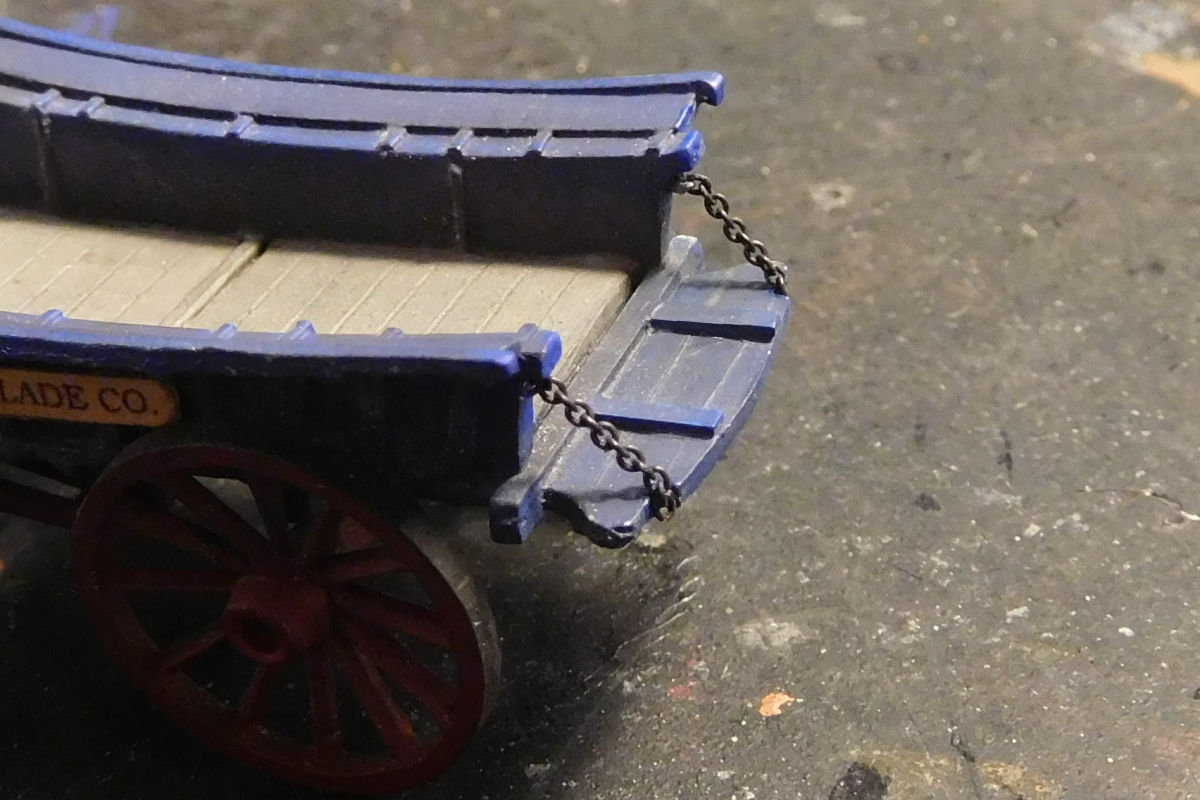 The rear flap was detailed with interior bracing and chain from Cambrian models. 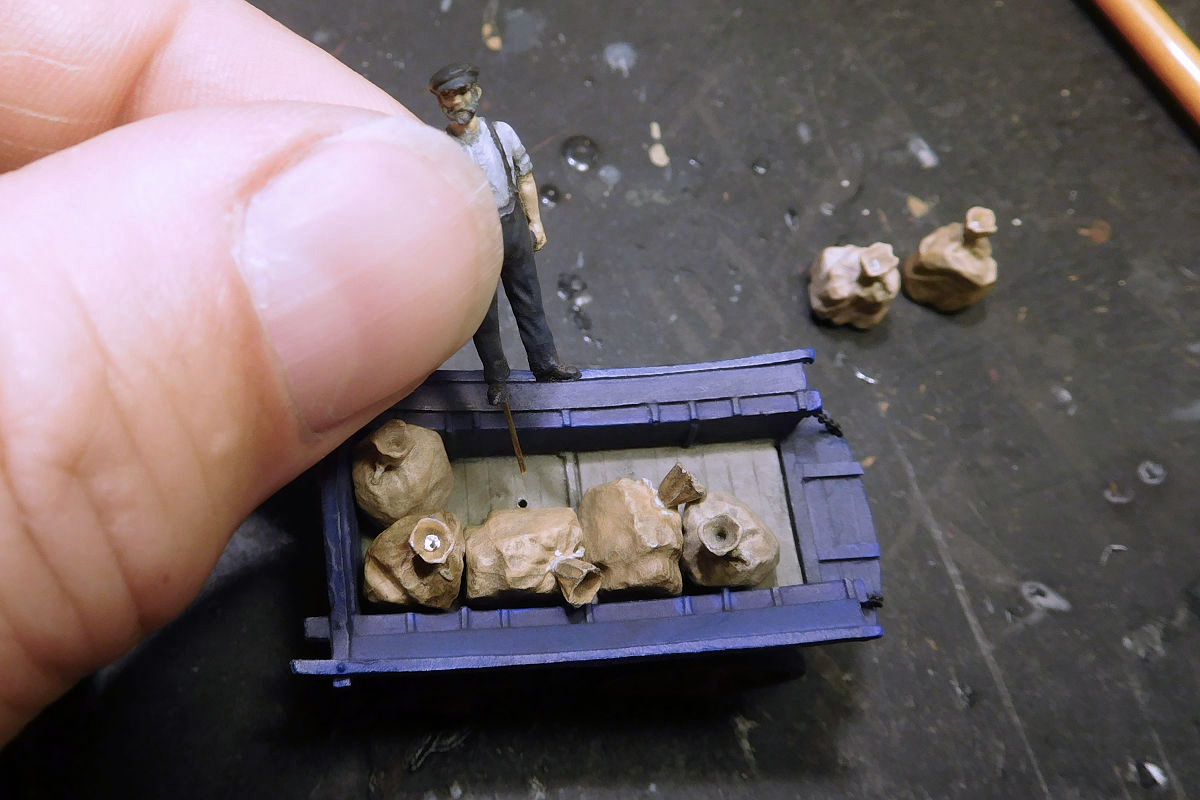 An Andrew Stadden figure was added, and some of those nice bulky sacks from Dart Castings. 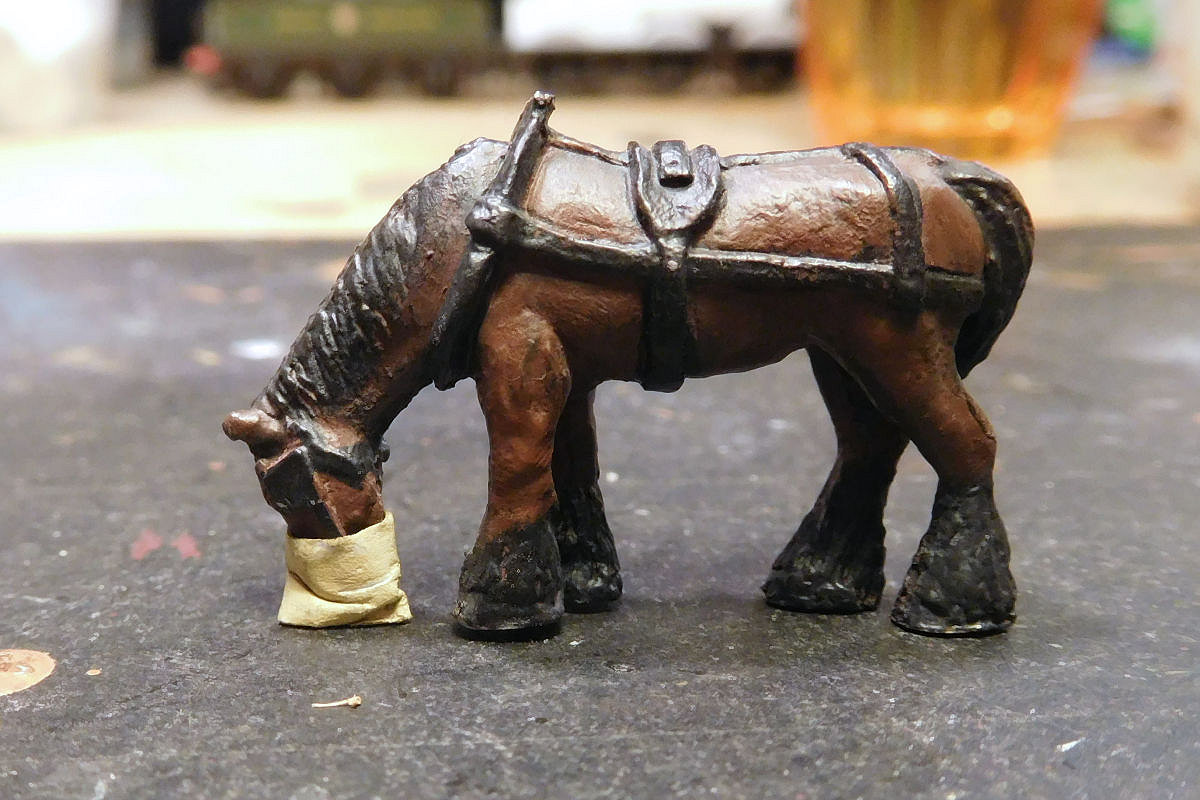 The horse is also from Dart Castings. I thought I'd have a lighthearted go at a nosebag, made from ordinary printing paper, rolled and glued. Getting a decent fit and fold was surprisingly tricky.

As this delightful photo shows, I really ought to add a strap to hold it in place. Source: Wikipedia. Embedding permitted. https://commons.wikimedia.org/wiki/File:Van_Girl-_Horse_and_Cart_Deliveries_For_the_London,_Midland_and_Scottish_Railway,_London,_England,_1943_D16841.jpg 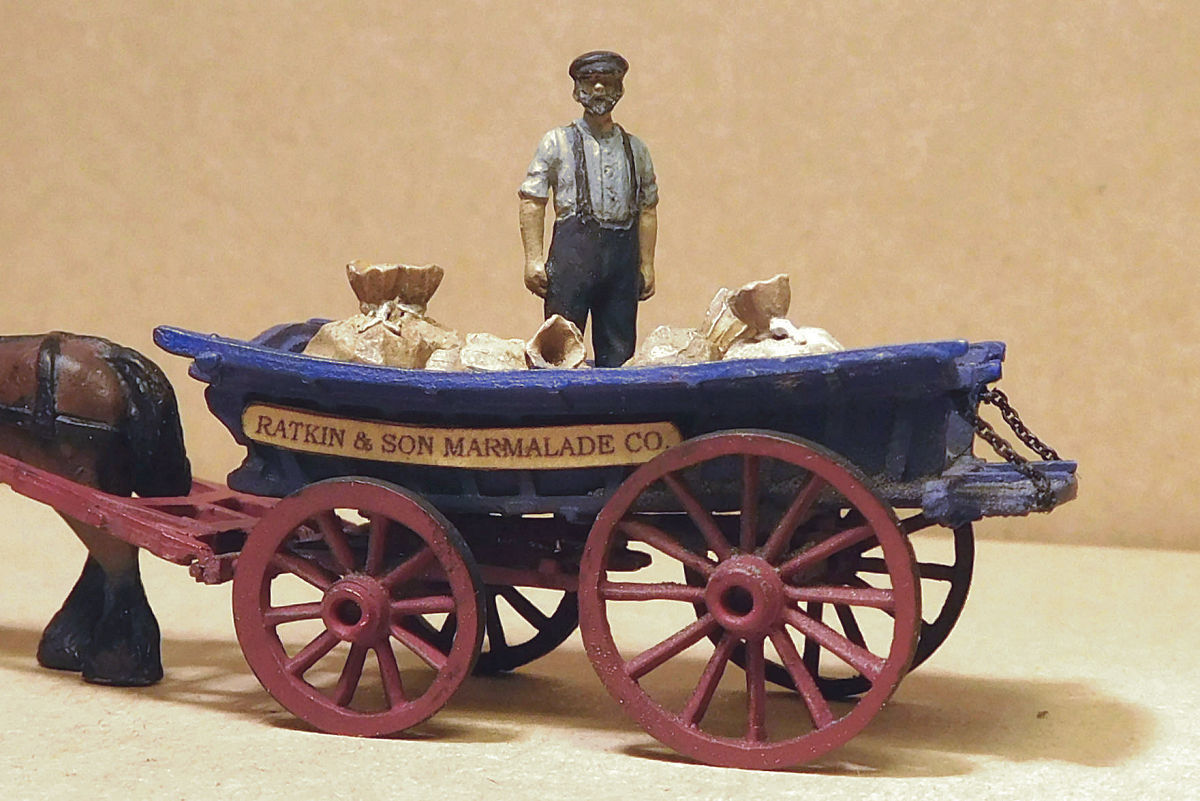 Wagon done. It is manned by D. Woods, formerly of the GWR and His Majesty's Prisons, now happily employed at Ratkin & Son. 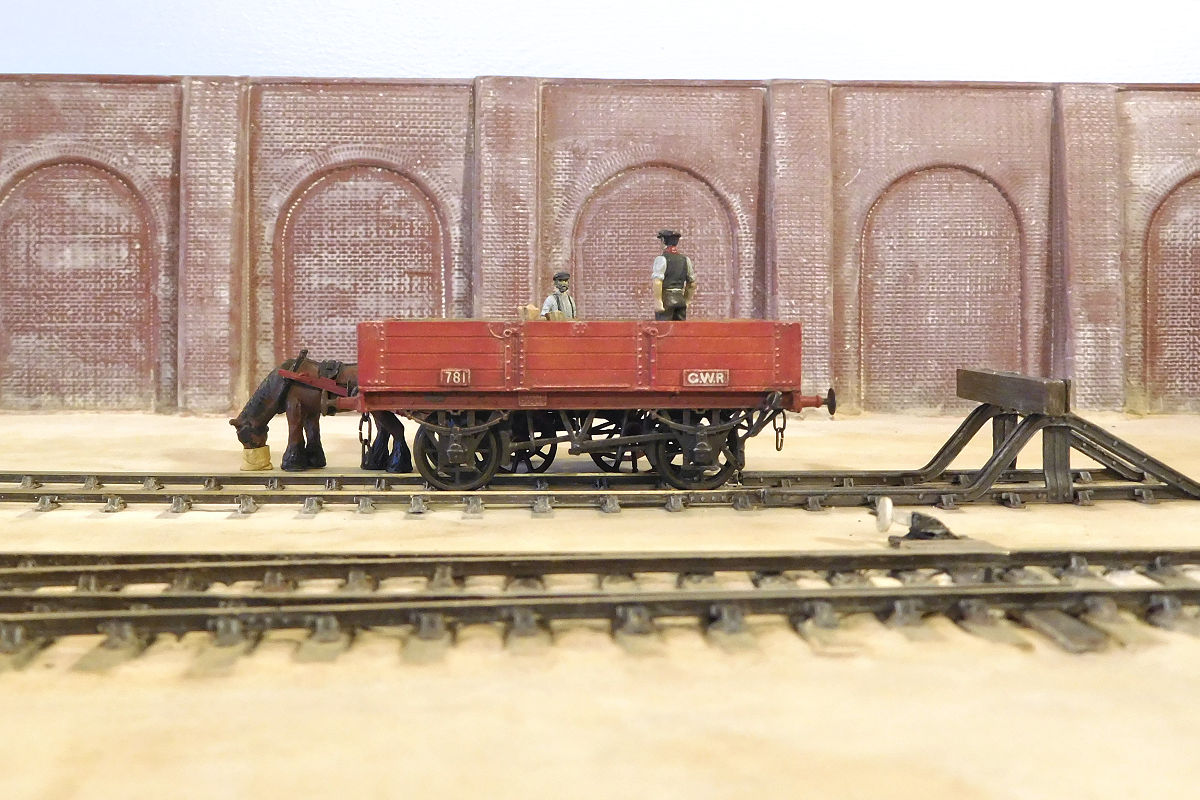 So here we are in one of the mileage sidings at Farthing Old Yard. Obviously there is work going on - but, er, what exactly? 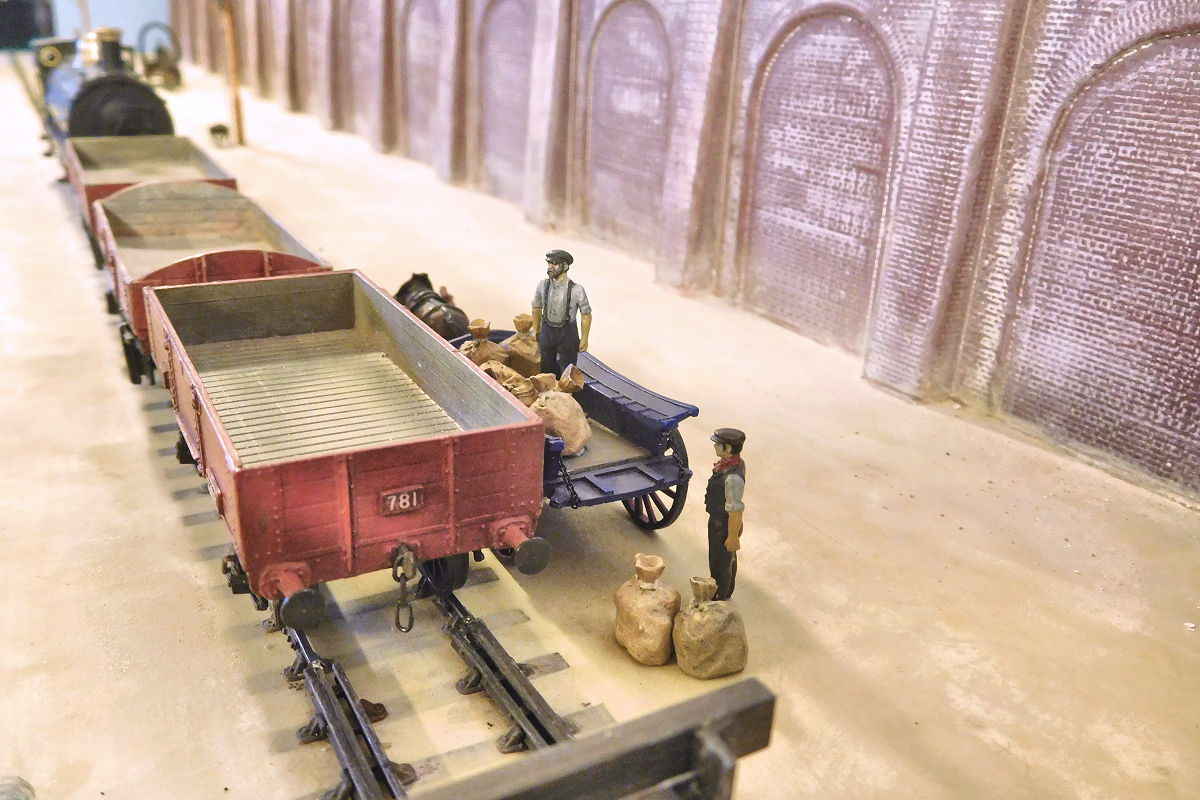 Ah, an unloading procedure of sorts. The work seems to be all done. The loco crew must be very impatient, as they are already removing the goods wagon. Quite unusual. 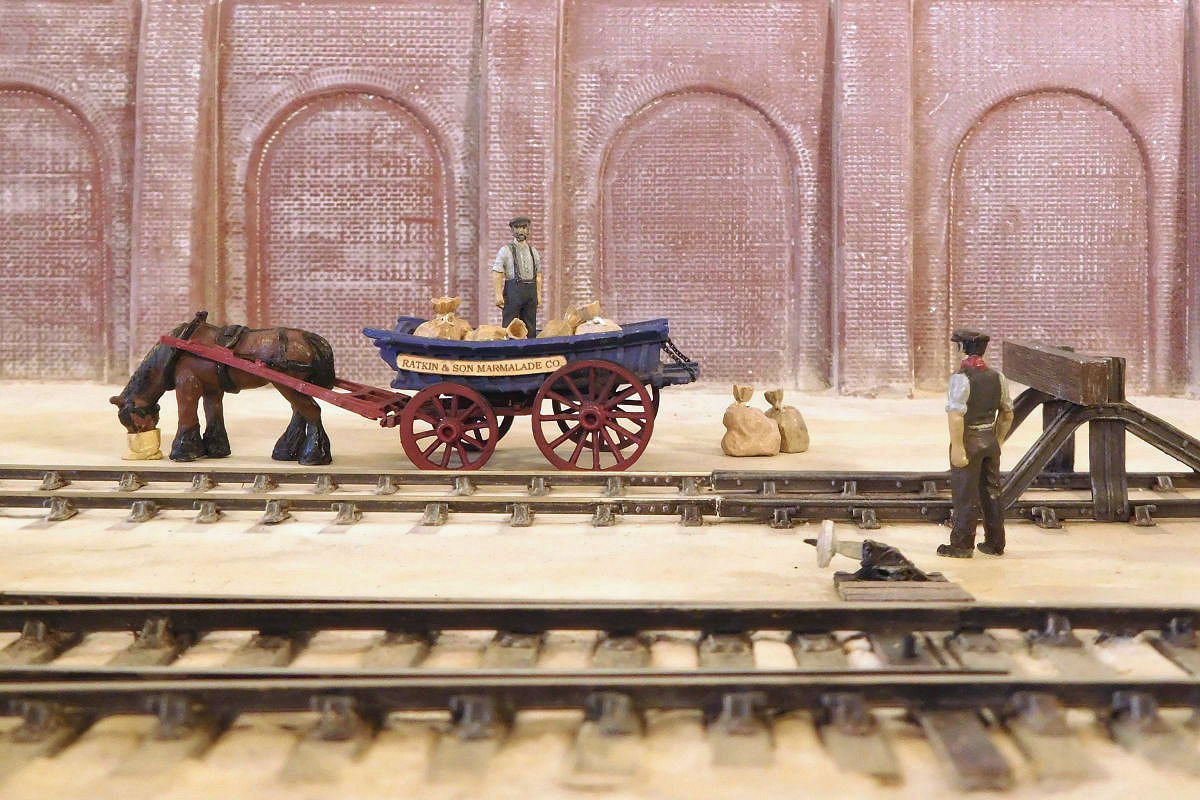 The siding has been cleared and we get a better view. A delivery of low grade oranges has been received, soon to be recycled as Ratkin's Finest Quality Marmalade.