The first parts to assemble involved fitting the hold cover and the boiler/engine room to the main hull. The air bubbles had been filled with fine Milliput, and general flash removed with a knife. However, the main items in the kit have 'skirts' around the bottom edges that have to be removed by sawing, carving, filing and sanding, until they are smooth, flat, and fit flush with each other. Getting the bottom edge of the hull to sit flat on a glass or mirror surface is tricky because of its size. Gentle use of a large file helps with keeping the edges straight.

The hull had been sprayed with Halfords matt black paint. The decking was then painted using a set Lifecolor Weathered Wood acrylic paints,.

After painting, the boiler room and hold cover were attached to the hull with a little cyanoacrylate (super) glue. The chain that controls the rudder looks good painted black and then dry-brushed with rust and white paint. The detail really shows up well.

As I said in the first part of the blog, I wanted to find a better looking replacement for the winch. I tried a local model boat shop, but they had nothing small enough. Then I came across the Langley white metal kit on the Internet. Their advertising photos of their models do not make them look very impressive, but I ordered one, plus some life belts, fine chain and an anchor for later on.

The white metal winch parts needed cleaning up and straightening, but eventually made up into quite a nice little model. I added a brake pedal from a bit of spare brass etch, and some steam pipes from wire wound guitar string, and a steam valve handle from some nickel-silver wire, After painting, I later added a strip of paper from behind the pedal and around the main drum to form the brake. I was quite pleased with the end result. The winch was attached to the deck with more superglue, and a length of steam pipe added from under the main drum to disappear into a hole in the deck by the mast. An exhaust steam pipe from brass wire runs from the front of the winch across the deck and out of a hole drilled in the bow. 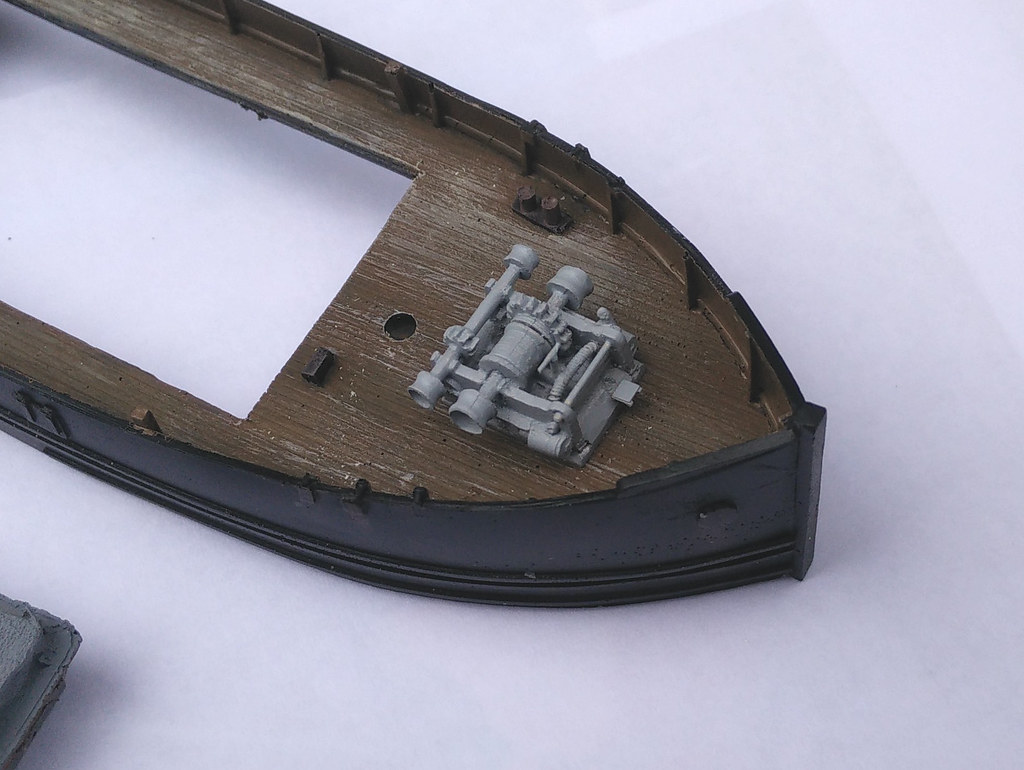 I had considered replacing the life-belts cast on the sides of the boiler room, but could not find anything that looked better. However, once cleaned up and painted, they ended up looking OK. The two port holes are deeply moulded, so I carefully cut and filed some transparent plastic until they were a good fit and glued them in with canopy glue (a clear setting PVA). 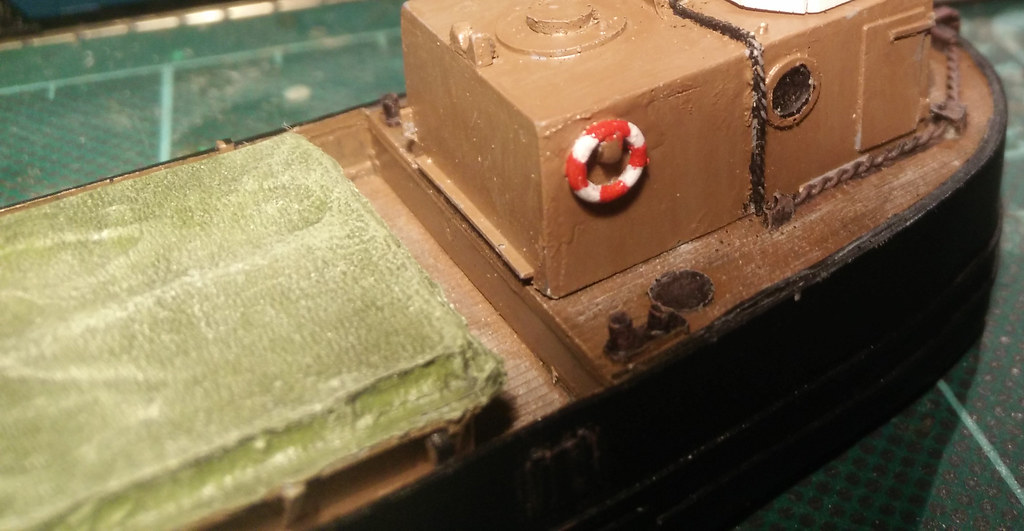 It was at this point that I noticed the lower hinge strap on the door was missing, and I had to add a small strip of paper to replace it.

The circular plates on the deck are hatches to the coal bunker for the boiler room.

So, the next part will look at the wheel house and chimney.