Jump to content
What are you doing next weekend?


Back in 2015 I wrote a Post for my Blog detailing an improvement to the old Mainline / Dapol model of the ex LMS Fowler 2P. 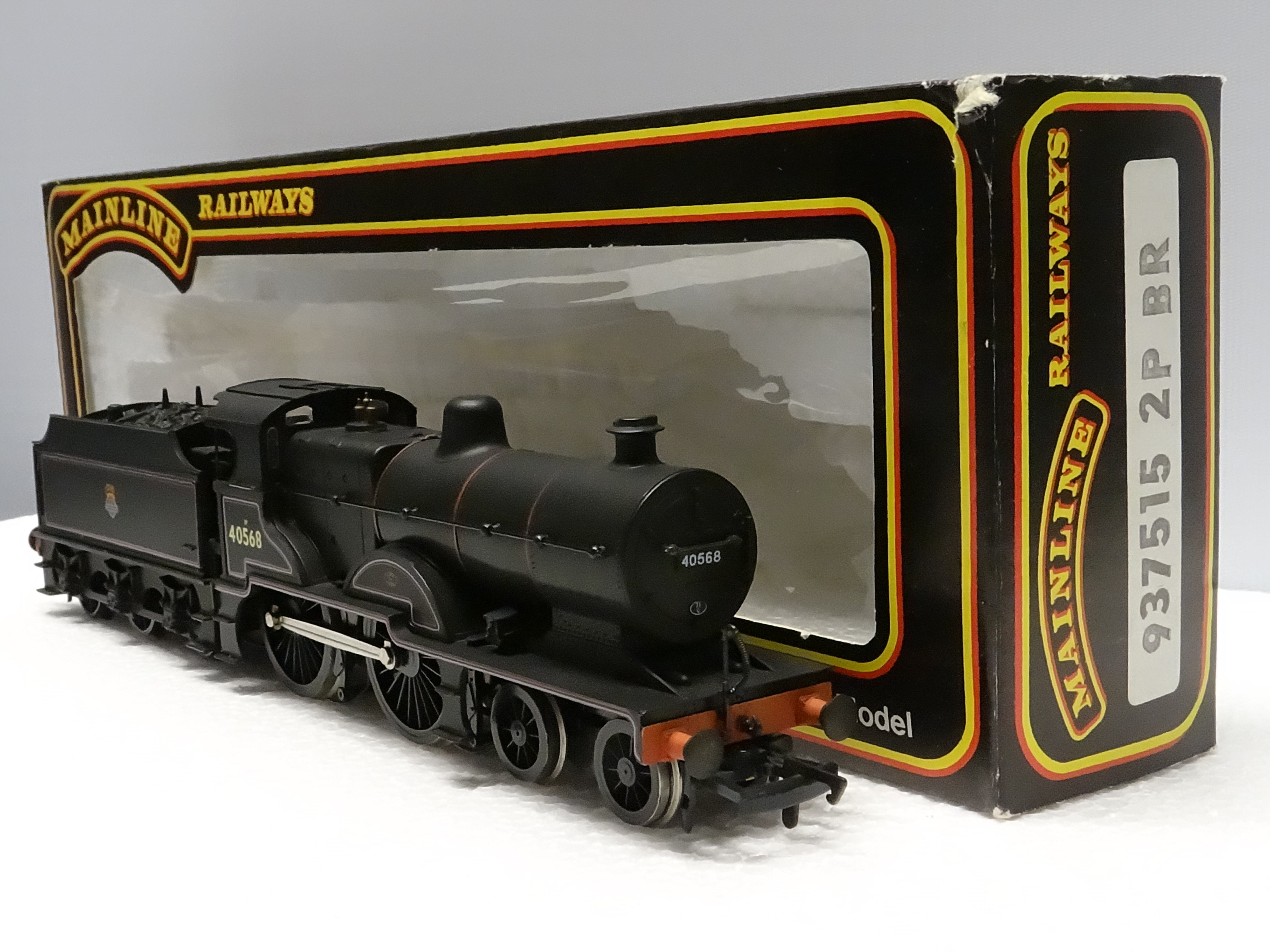 Crucially the work required access to Hornby spare part X6475, the front bogie from their latest engine drive 2P (R3028).  Sadly as said in my previous Post about remotoring the Hornby Q6, Hornby seem to have given up on providing useful spare parts.  Front bogie X6475 continues to be out of stock.

After being tempted by a Dapol offering on eBay I needed to find an alternative solution. 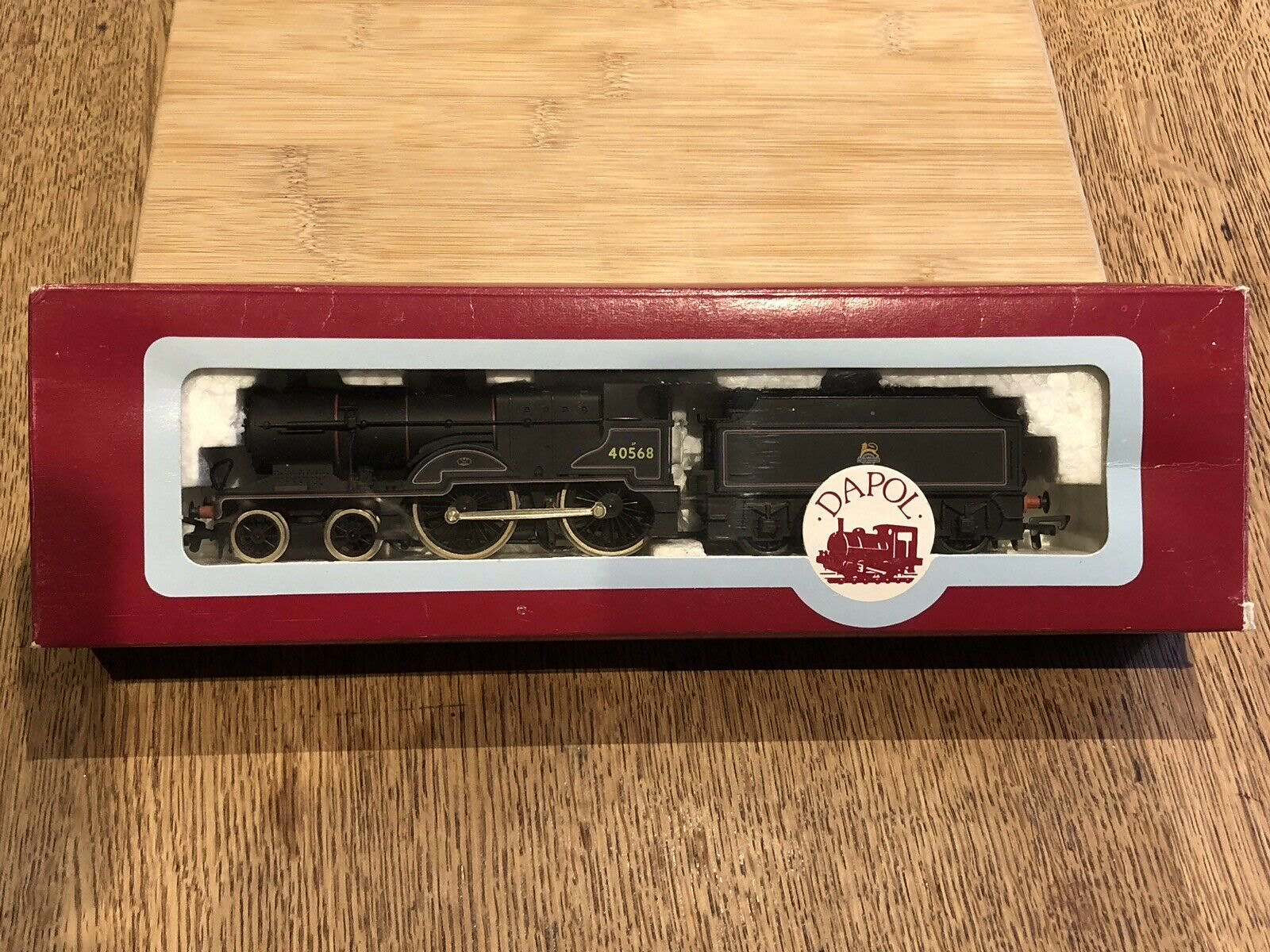 The ex LMS Fowler 2P was a very common locomotive and as such should feature on BR (LMR) and BR (SCR) layouts.  Back in history Tri-ang produced a model of a southern L1.  It was engine driven and when repainted black it could be used as the starting point for a model of the ex LMS engine.  However as in the prototype the 4-4-0 wheel arrangement of the model does not lend itself to heavy trains.  The engine driven model did not haul very much and was not popular.  Now what if there had been a tungsten chassis? 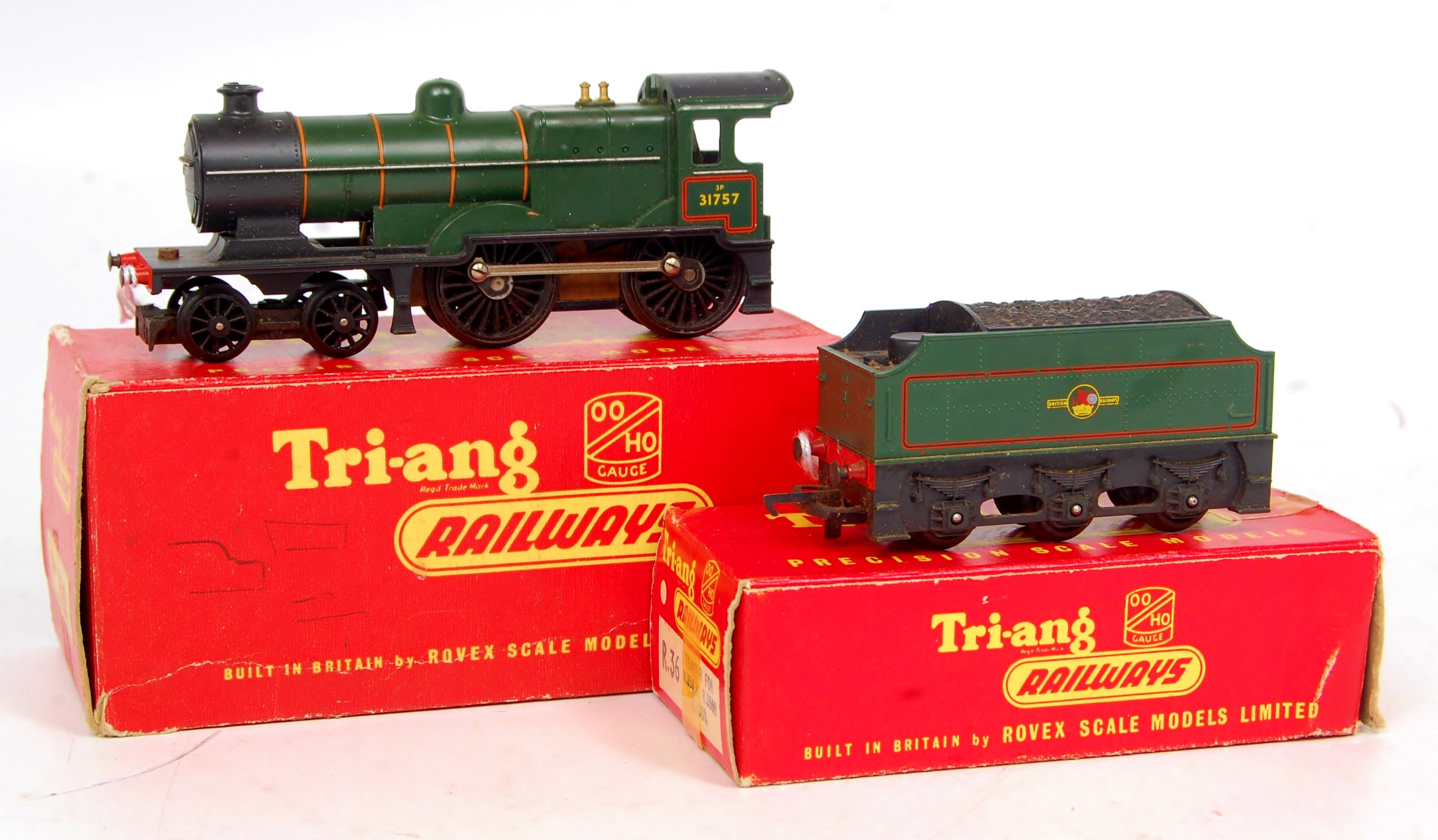 Mainline solved the problem by using a tender drive borrowed conveniently from their existing model of the 4F (which they had acquired from Airfix)).  The tender drive was cheap and cheerful and with careful maintenance it worked well.  However for the 2P Mainline only provided electrical pickups on the locomotive driving wheels.  For most people’s model railways these were woefully inadequate.  As was said in my Blog previously, Mainline must have been aware of the probabilities of poor running because the plastic chassis and bogie are engineered to accept pickups.  Mainline look to have been contemplating the same phosphour bronze ‘concertina’ pickups as were used on the driving wheels.  I am only guessing, but this form of spring contact generates a high resistance to wheel rotation and perhaps when applied to the lightly loaded bogie it would have caused too many derailments. 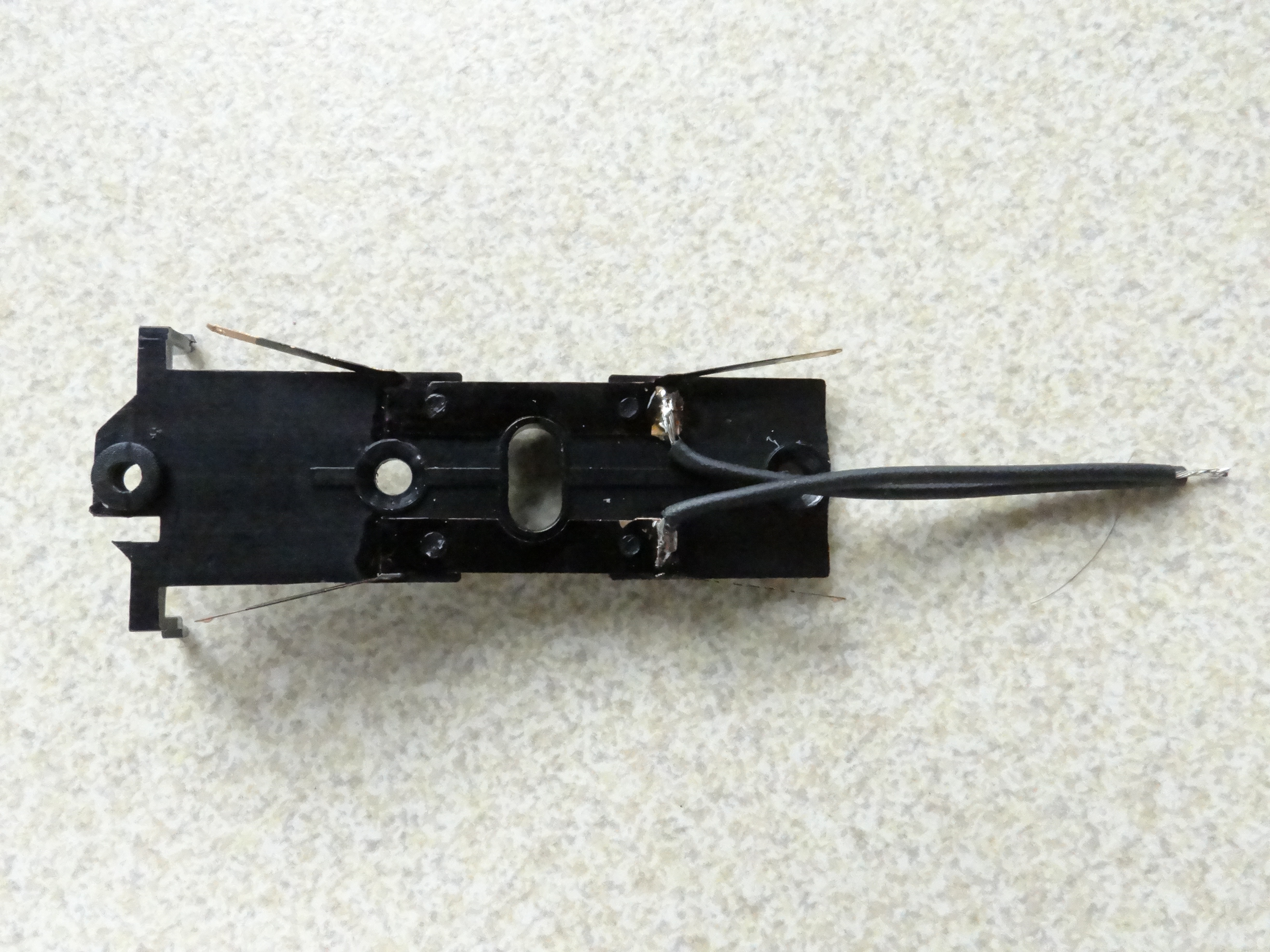 The latest Hornby bogie has wiper pickups which generate far less friction than the concertina arrangement.  I would add my own wiper pickups to an old Mainline / Dapol bogie.  A search of my stash of bits and pieces highlighted some wiper pickups  These had been recovered from the bogies of a Bachmann Warship – “Sir Brian Robertson” to be precise which had failed with Mazac rot. 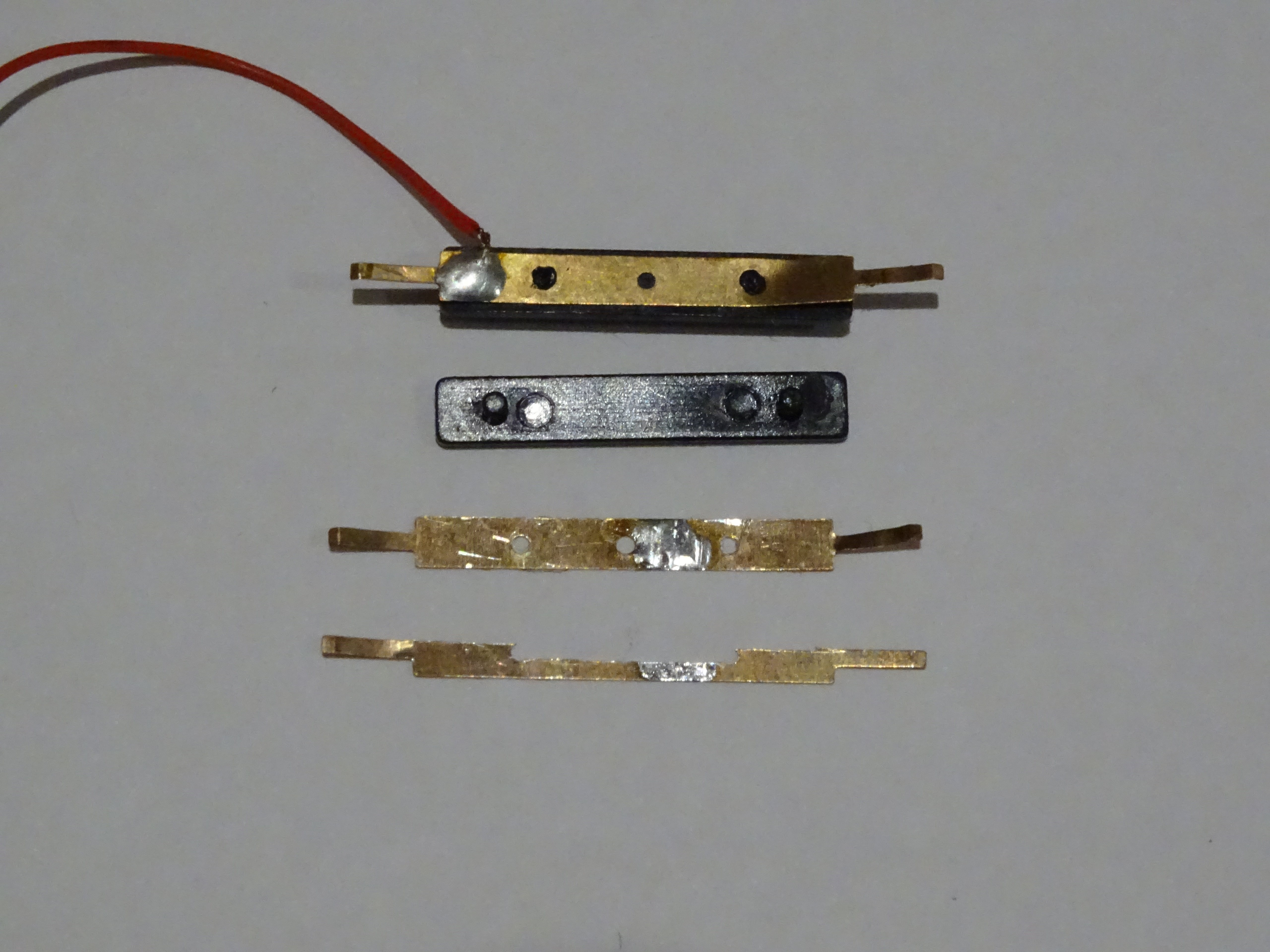 I removed the phosphor bronze wipers from their plastic backing and cut them with a sharp craft knife to what I thought was a better shape for the Mainline bogie.  The Bachmann spacing is too small to replicate the Hornby wipers on top of the bogie.  Also it has to be remembered that it is only the wheel rim that is ‘live’ and that if the pickups to both sides of the bogie rub against the axle there will be a short circuit.  I had an idea to fit the wipers below the axles without increasing the depth of the bogie. 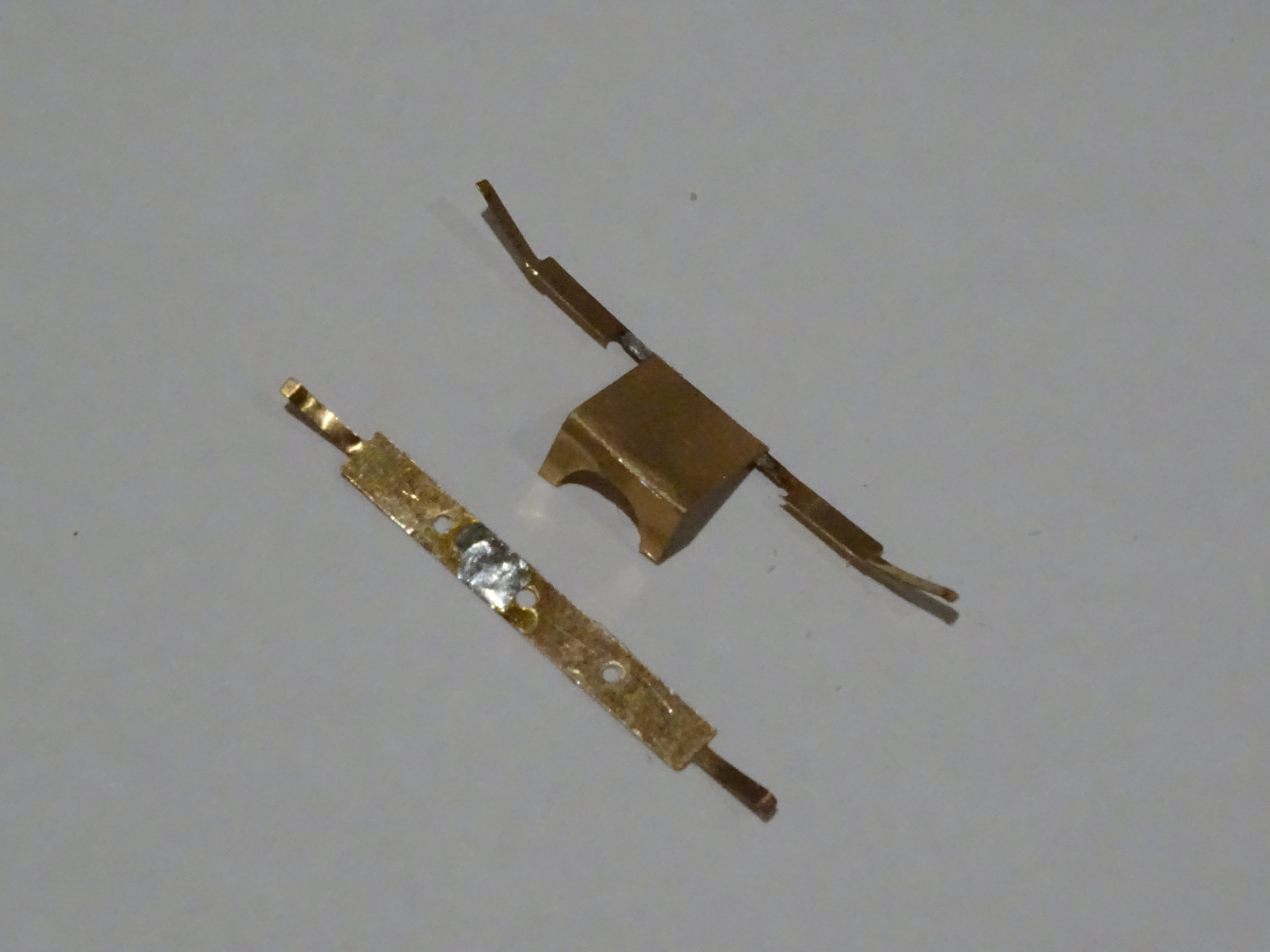 I soldered the Warship wipers to a rectangular strip of phosphor bronze, bent over at the ‘top’ and tailored to fit the side of the Mainline bogie.  In this case the rectangular piece was cut from a left over strip out of Hornby’s Duke of Gloucester tender – but there will be other sources.  (In my case these were spare after upgrading the DoG tender with the underframe from a Britannia with sprung buffers.) 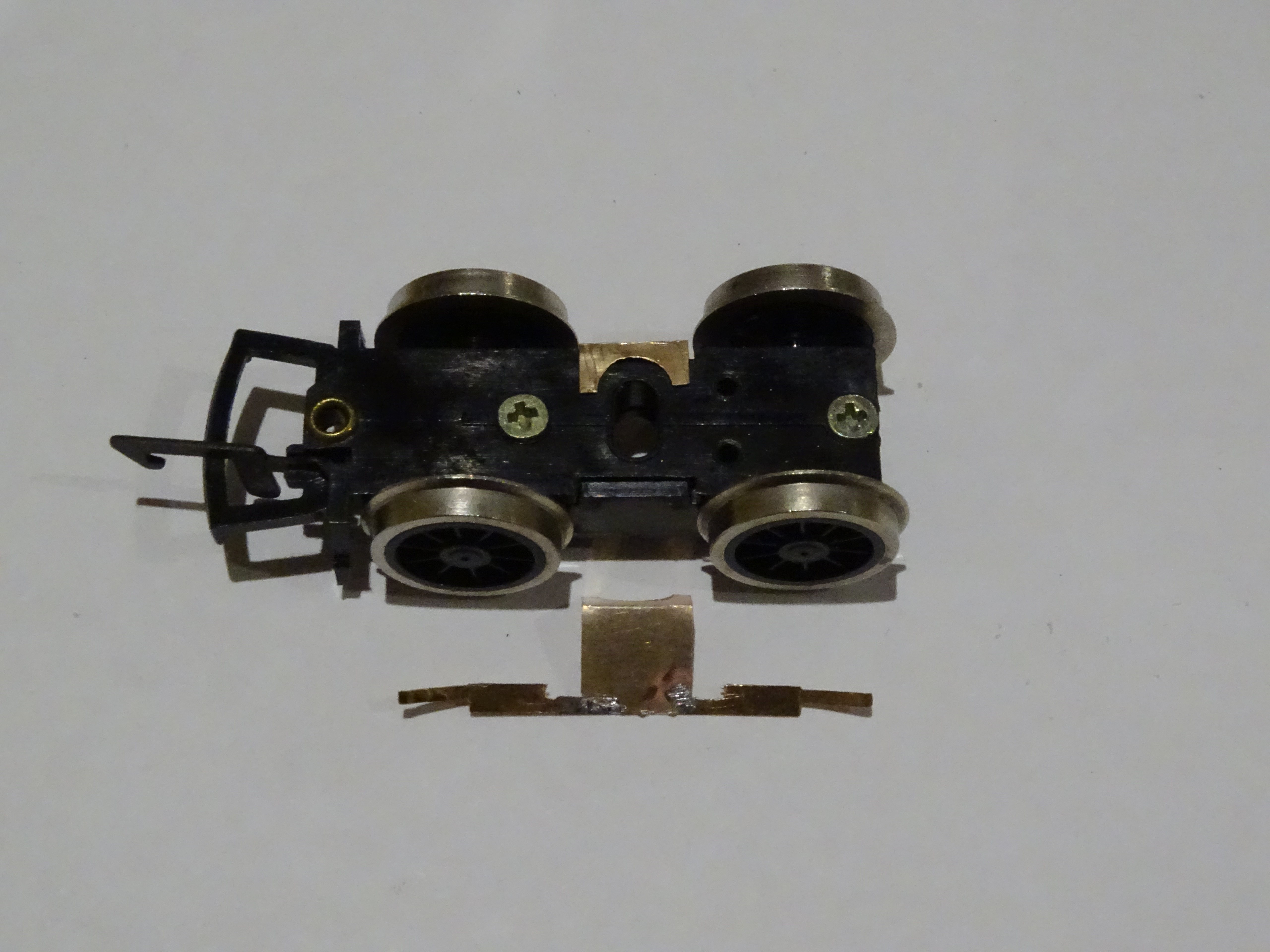 I had a number of good ideas for fixing.  Not interfering with the central bogie pivot is a must.  In the event I soldered the connecting wires prior to using Super Glue to fasten the pickups to the top of the bogie.  This way the top and bottom halves of the bogie can still be separated which might just be necessary if you ever wanted to re-bend the wipers – or change the wheels. 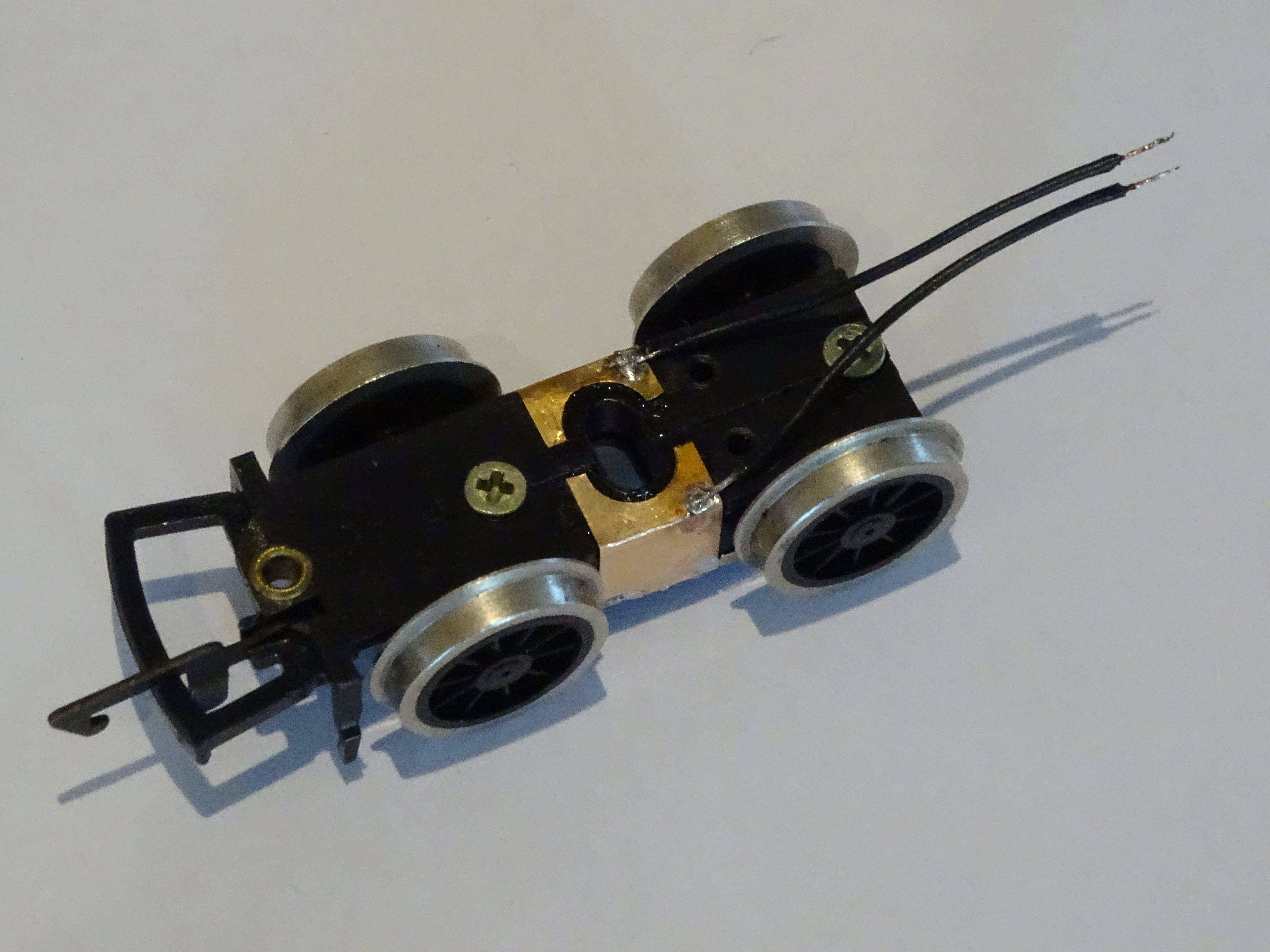 Soldered and glued prior to painting

The finished unit is shown below 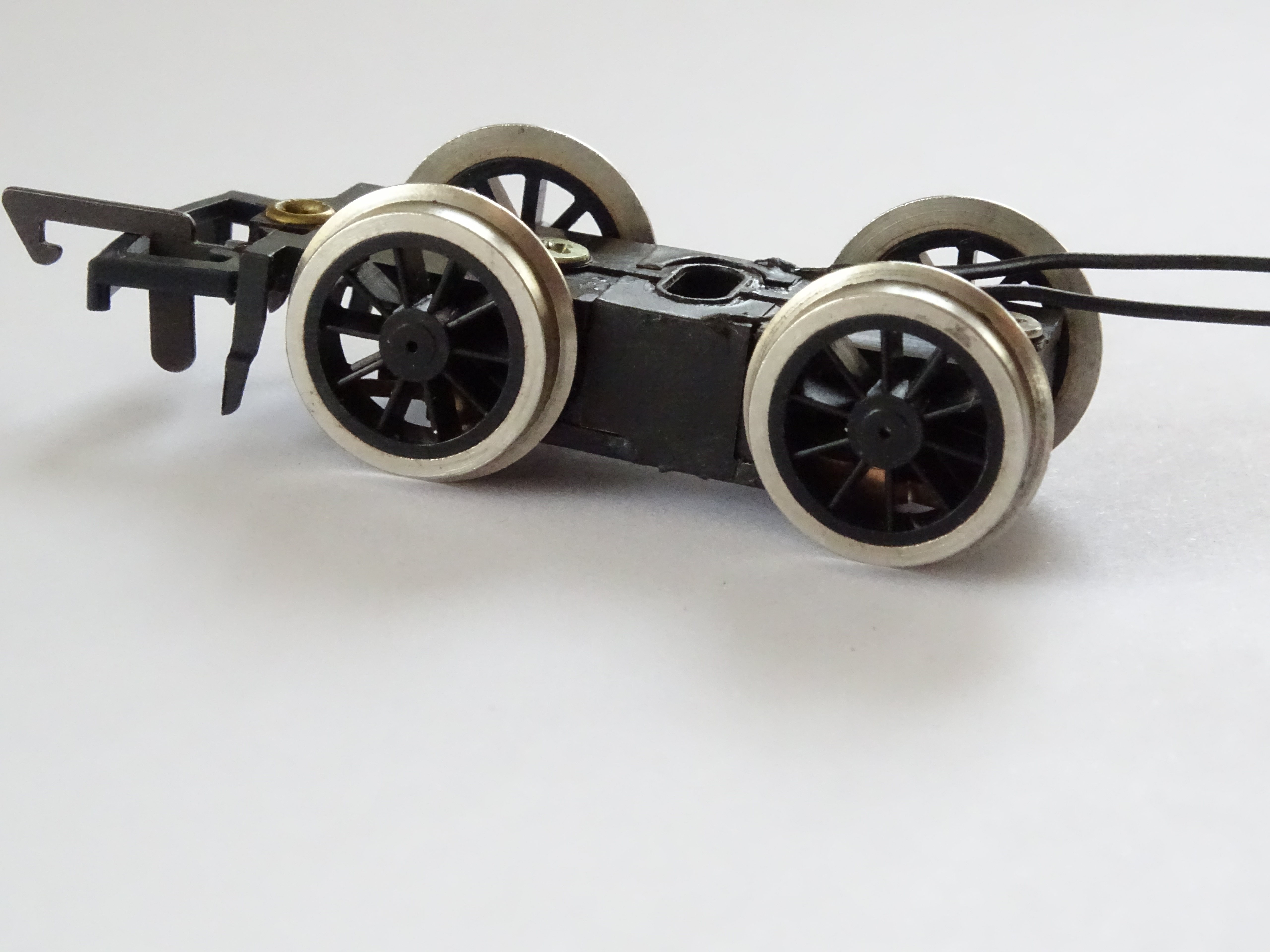 The soldered connection to the locomotive chassis is the same as used in the previous Blog Post for the Hornby bogie: 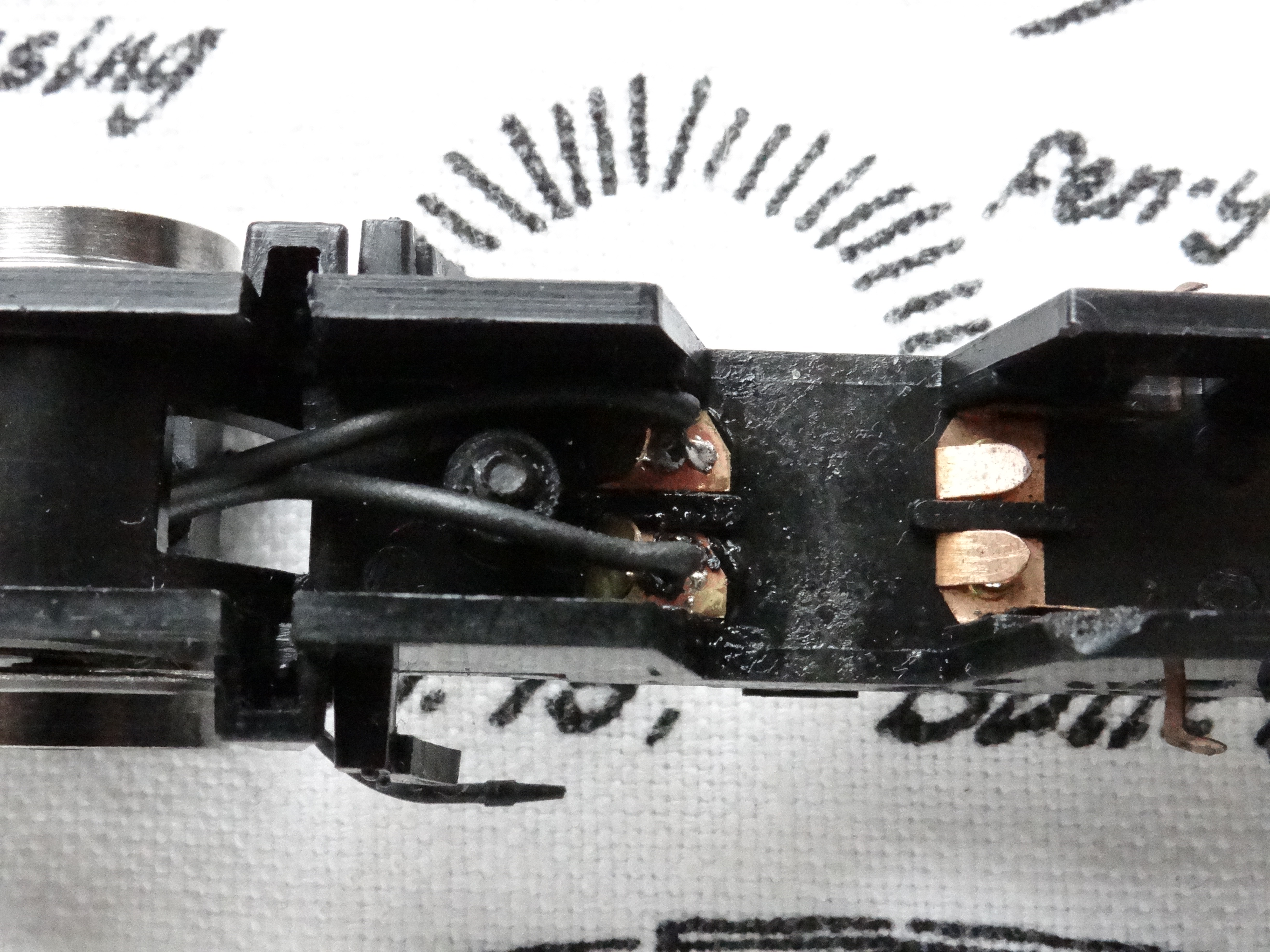 How does it perform?  I would say very well!

Finally a view of the finished engine grabbed from the video. 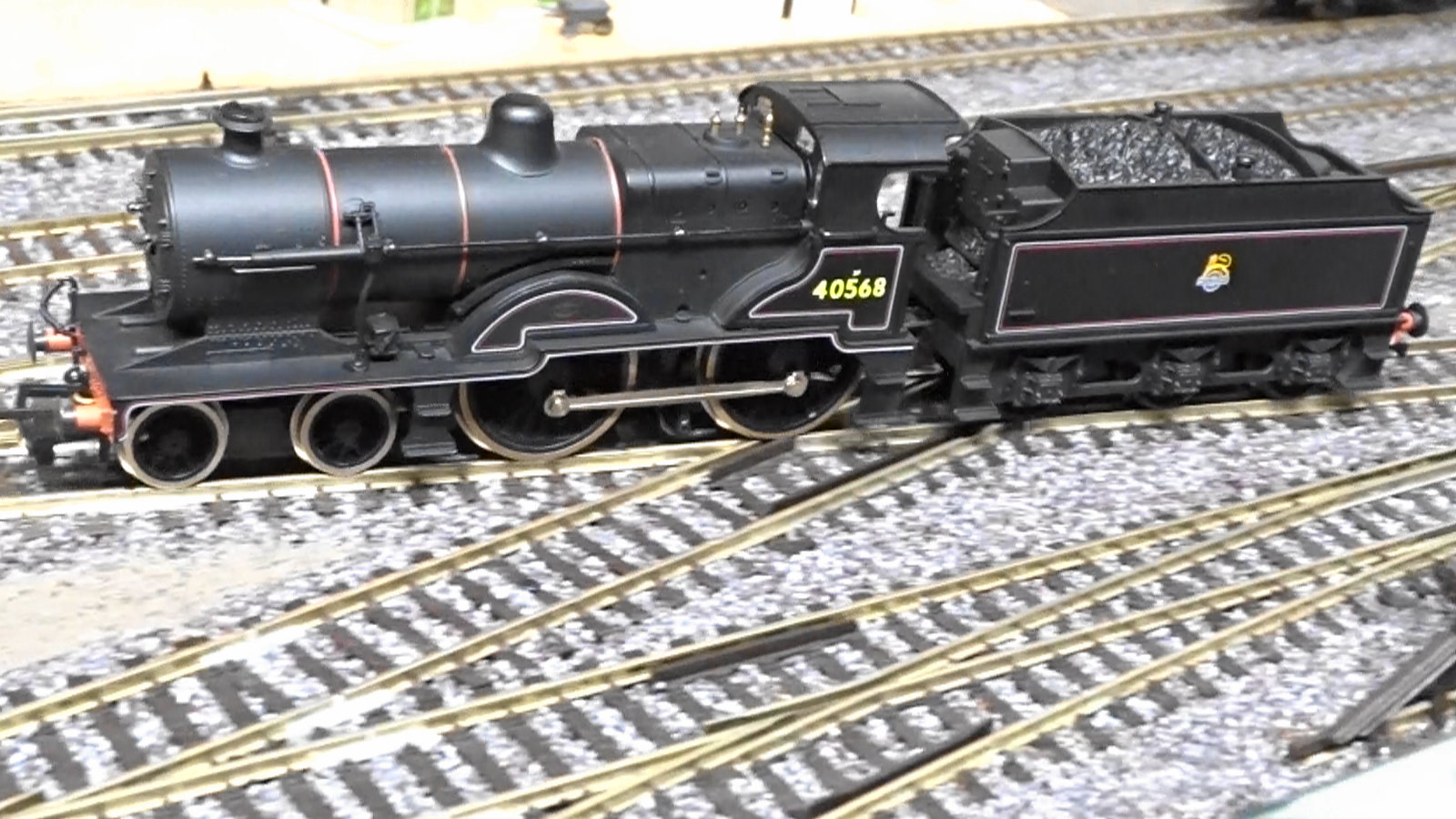