At last, we're onto the final stage; the assembly.

First though, and before you start gluing things together, it's wise to do a dry-run; so that you can make final adjustments, and make sure everything fits as it should: 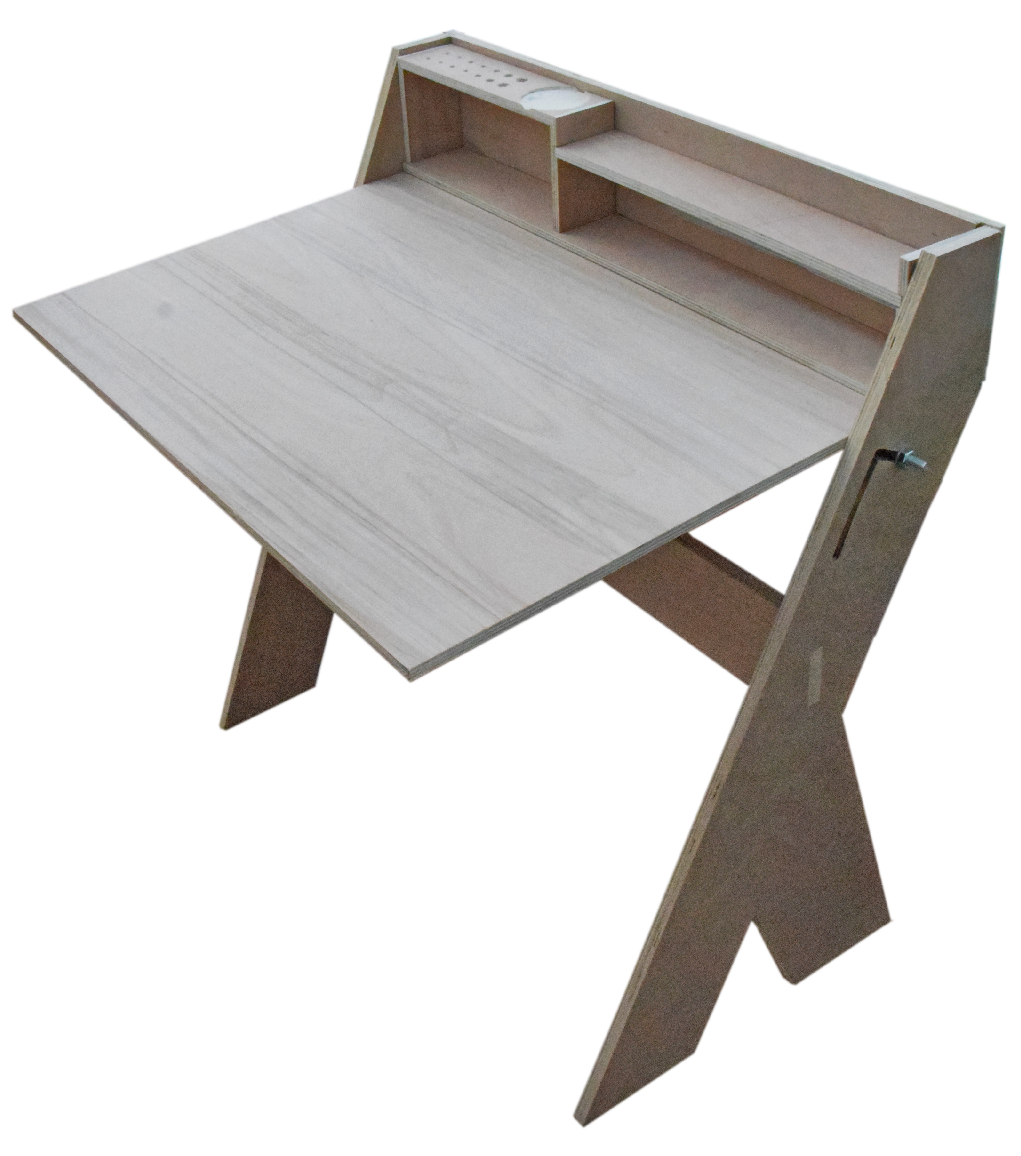 Above:  The dry run above is actually the point that I realised the underside of the work surface would definitely need bracing; hence why you see the crossbar in it's original position halfway up the legs!


Now that I've made any necesarry adjustments,  I could finally start gluing it together. I must admit that last week I forgot to mention about how I glued the rest of the supports onto the underside of the work surface... 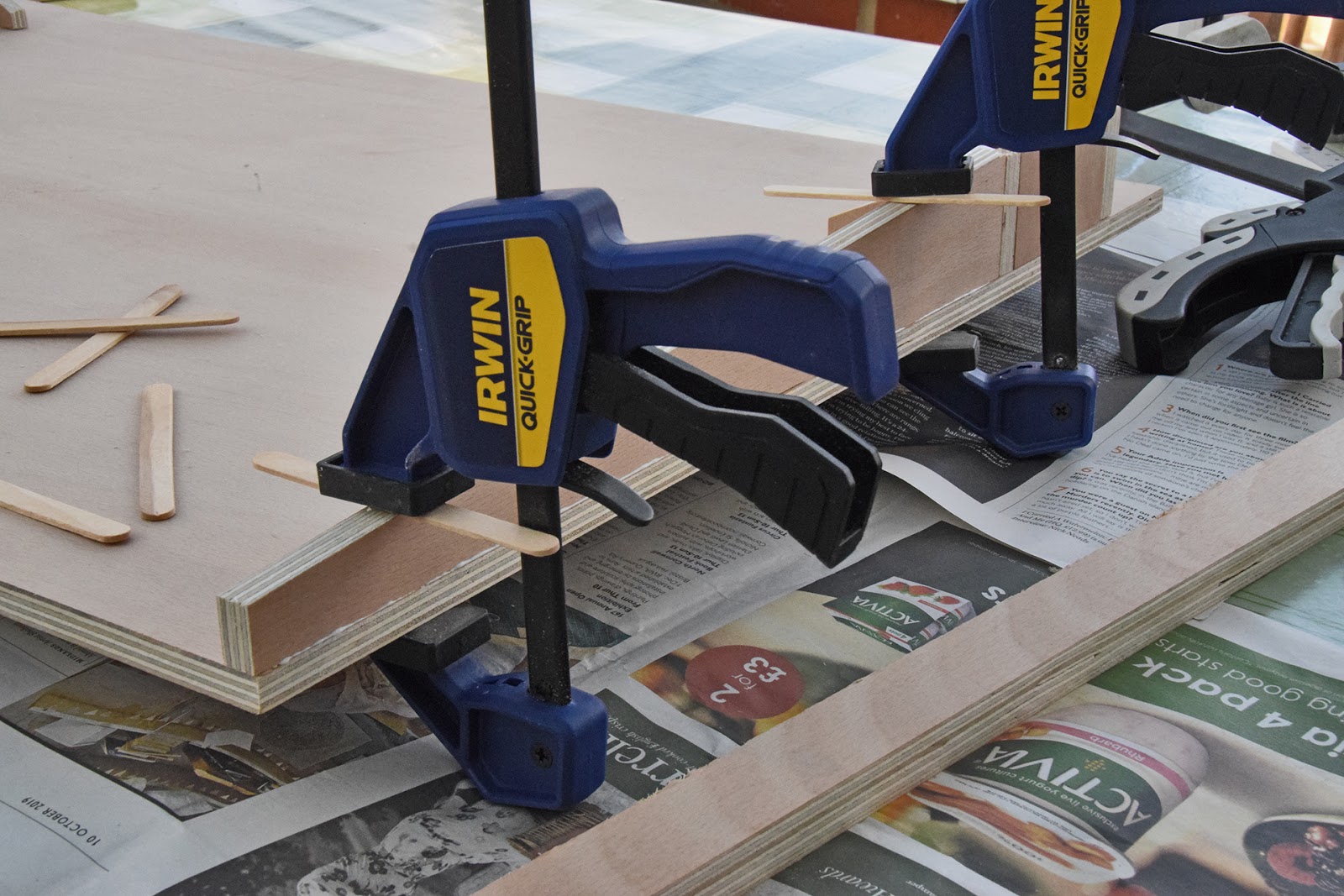 Above: In order to clamp the angled side support, lollipop sticks were used on the "downhill" end of the clamp, so that the pressure is exerted vertically. This keeps the clamps more secure than if they were at an angle. 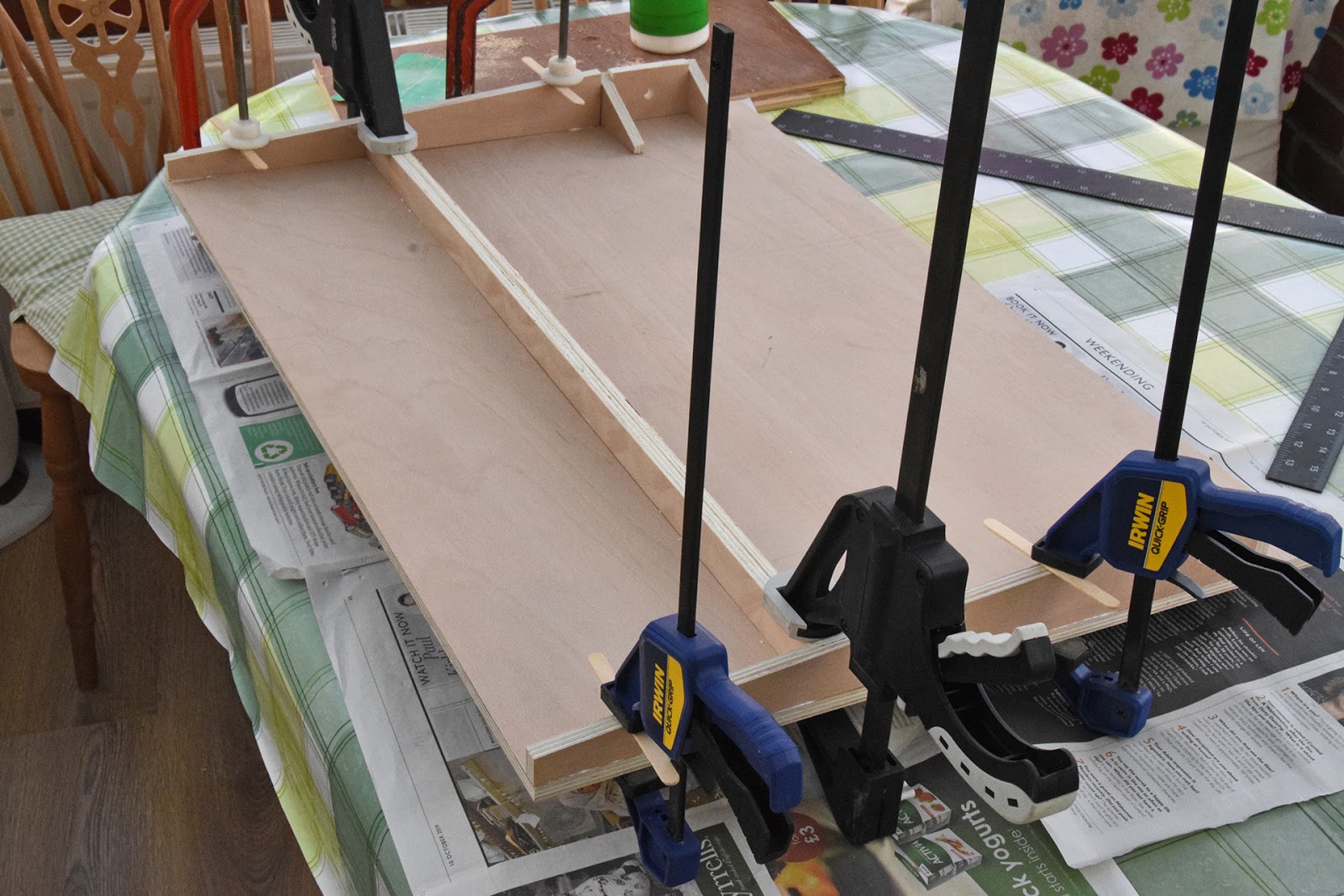 Above: The location of the crossbar could also be marked, and then glued and clamped into place. As always, this was left to cure overnight. Don't forget to ensure that the sides are perfectly vertical, or else it will rub on the legs. 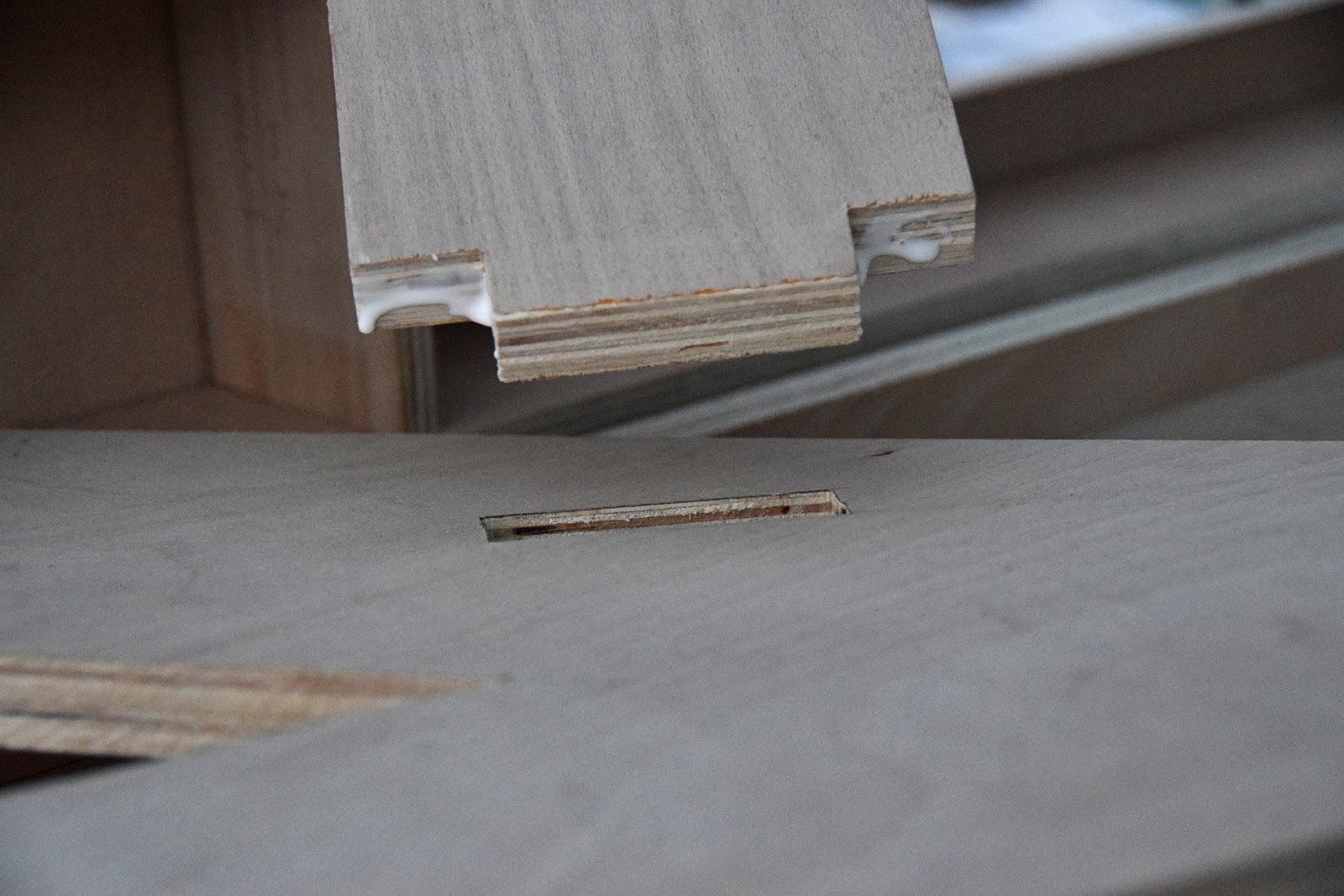 Above: Now we can turn our attention to the crossbar that will sit between the legs. The notched ends were glued (having been test-fitted beforehand in a dry-run), and inserted into one leg. Obvious things to point out here are that it's easier to glue this on the floor (make sure you put it on newspaper though, or you'll glue it to the floor!), and also that you will need to ensure you glue both legs the right way around!

I actually didn't wait for one end to cure before putting the other end into the second leg. The reason for this is that I also glued the shelving into place as you will see; which helped ensure the whole thing was straight. 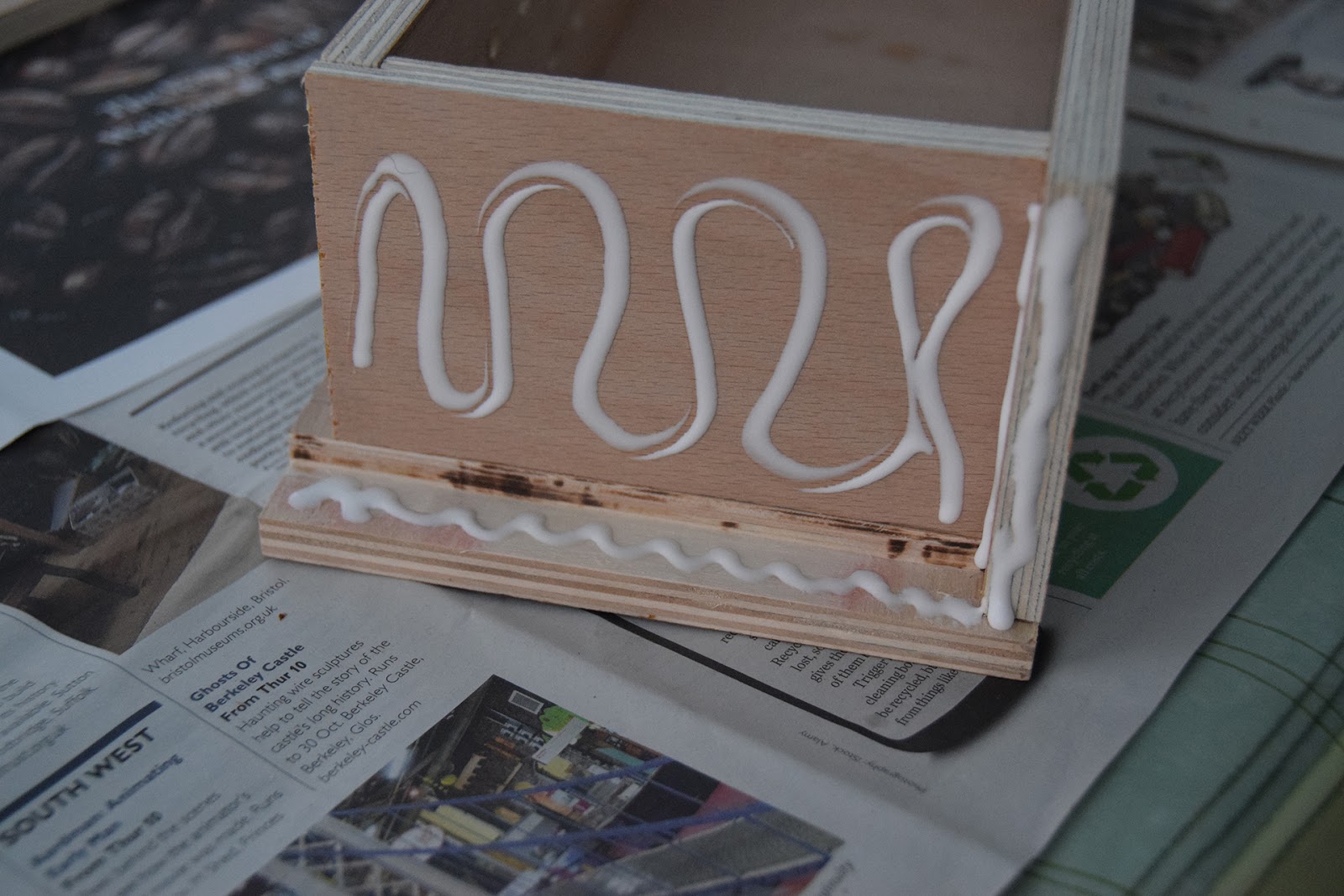 Above: Thus, glue was applied on both ends of the shelving unit, including the rebates... 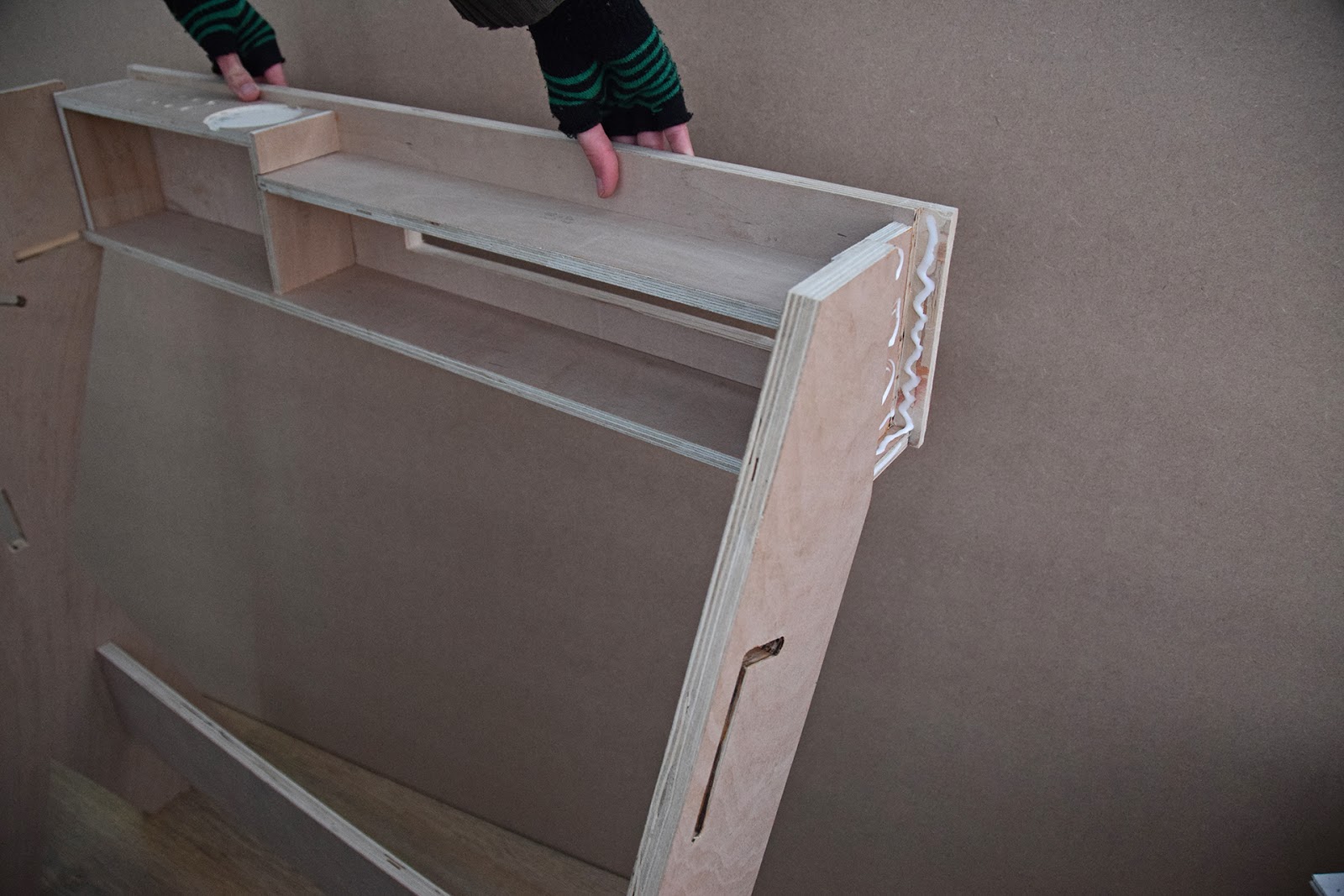 Above: ...which could then be slid into place, using the rebates in the leg and the shelving end to guide it into place. Excess glue was wiped off with a paper towel... 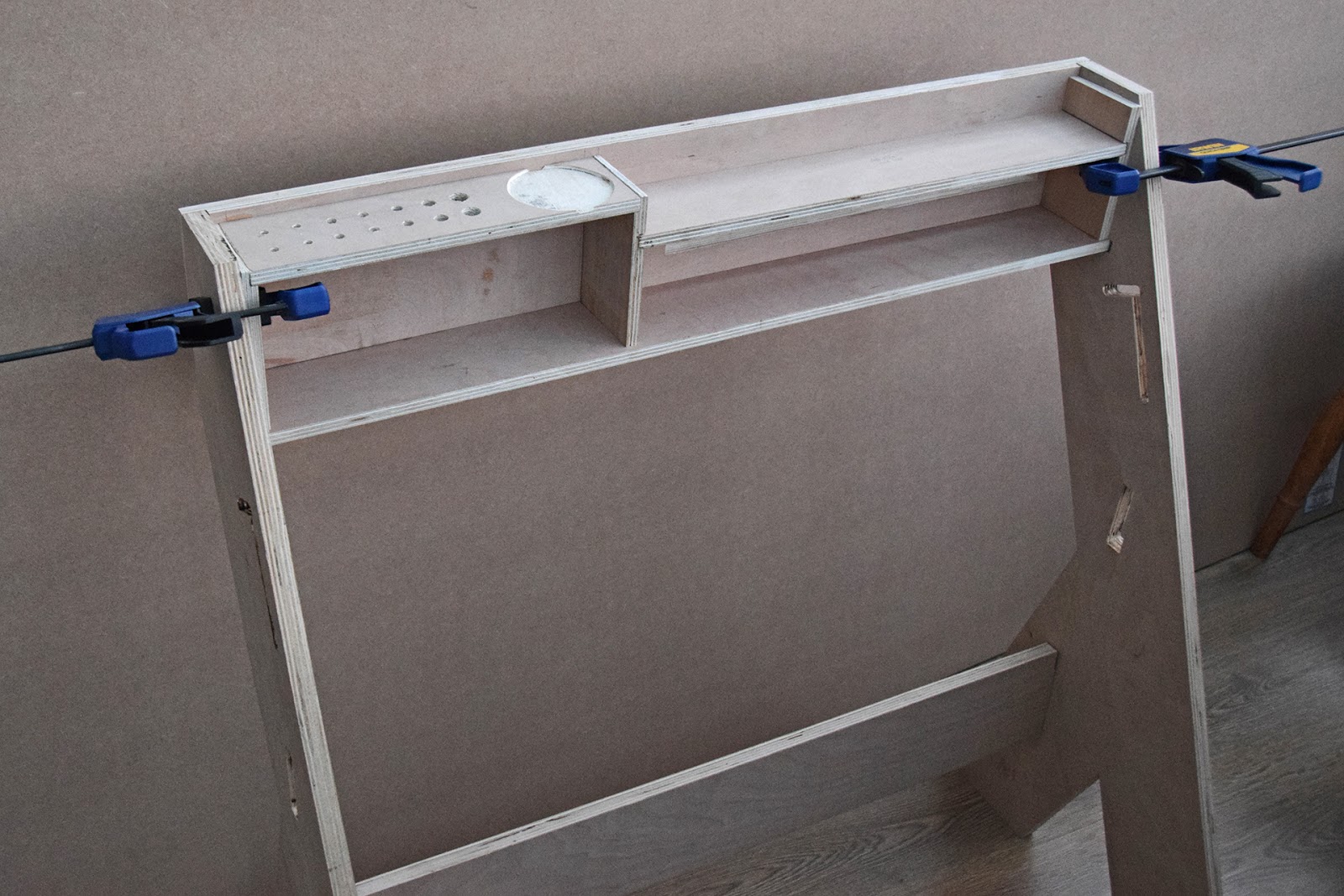 Above: ...and the sides clamped together. 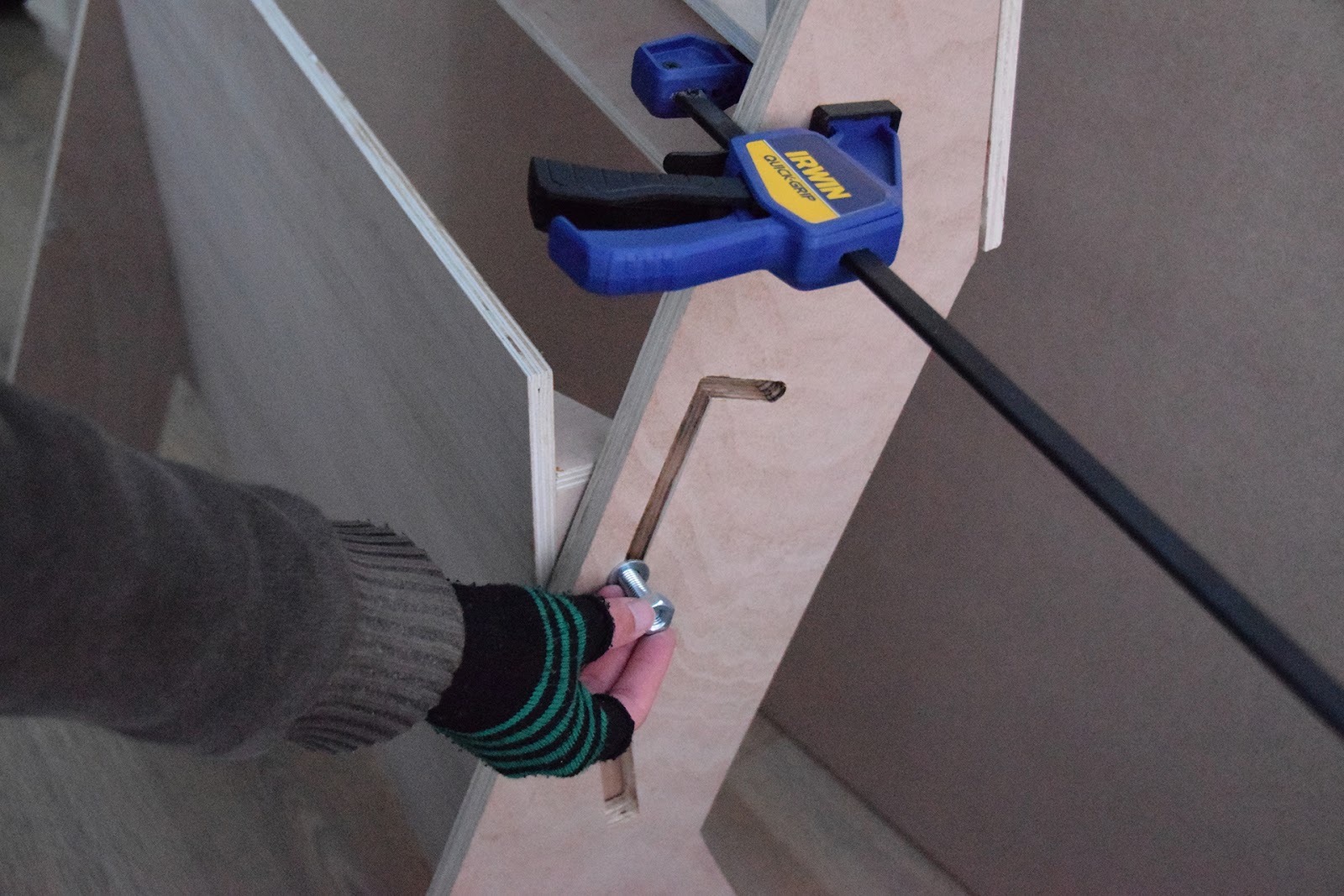 Above: Before I left it all to cure overnight, I actually bolted the work surface into place, and used it to double check it wasn't binding too much on the legs. I would recommend adding a washer between the legs and the work surface; as such, I have allowed an extra 4mm for this on the drawings now to be found on the first post.

And that was left in place to cure overnight; meaning it was now complete! Before I end this one, I thought I ought to give my final thoughts, and offer some improvements to the design.

Overall, I'm very happy with how it turned out, my only regrets being not allowing for washers on the inside of the legs, and not cross-bracing the work surface sooner. That said, the design itself works as intended, and has produced a stable and useful work surface that can be folded out of the way when not needed.

Above: Taking only a few seconds to put away, yet having all your basic tools and paints ready for use at a moments notice, makes for a very useful desk!

As for future expansion, an additional bracket on one leg would be ideal for adding a clip-on, adjustable light; perhaps even integrating a cable run (which could just be a series of hooks fastened onto the rear panel) to tidy up any dangling cables.

Another idea I had is that if you had a dedicated modelling room (or an awkward space such as a chimney alcove), what I would actually suggest is integrating the desk into a storage wall, as shown below: 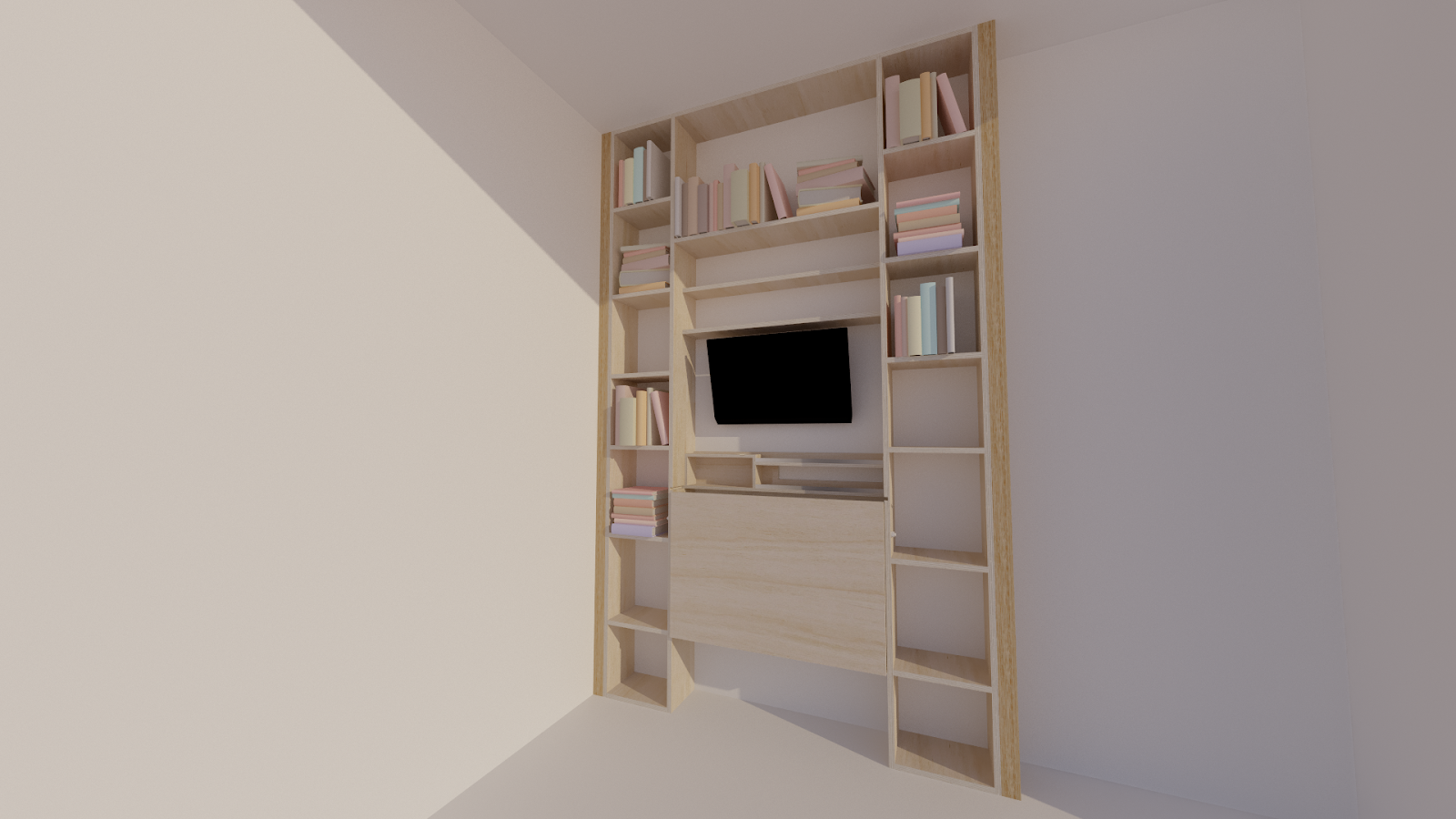 Above: A storage wall could be easily made from 18mm ply; using the same rebate technique as used on the desk. By putting a monitor/TV on the wall, you could even use it to work on "normal" day-to-day work things (or even just using the monitor for reference photos to work from whilst modelmaking).

And to finish off, whilst I accept that the style itself may not be to everyone’s tastes, the basic concept could easily be adapted to suit your chosen aesthetic and choice of materials. All things considered though, the desk has fulfilled the brief; a small, cheaply-built, collapsible workstation, with convenient access to frequently used paints and tools. 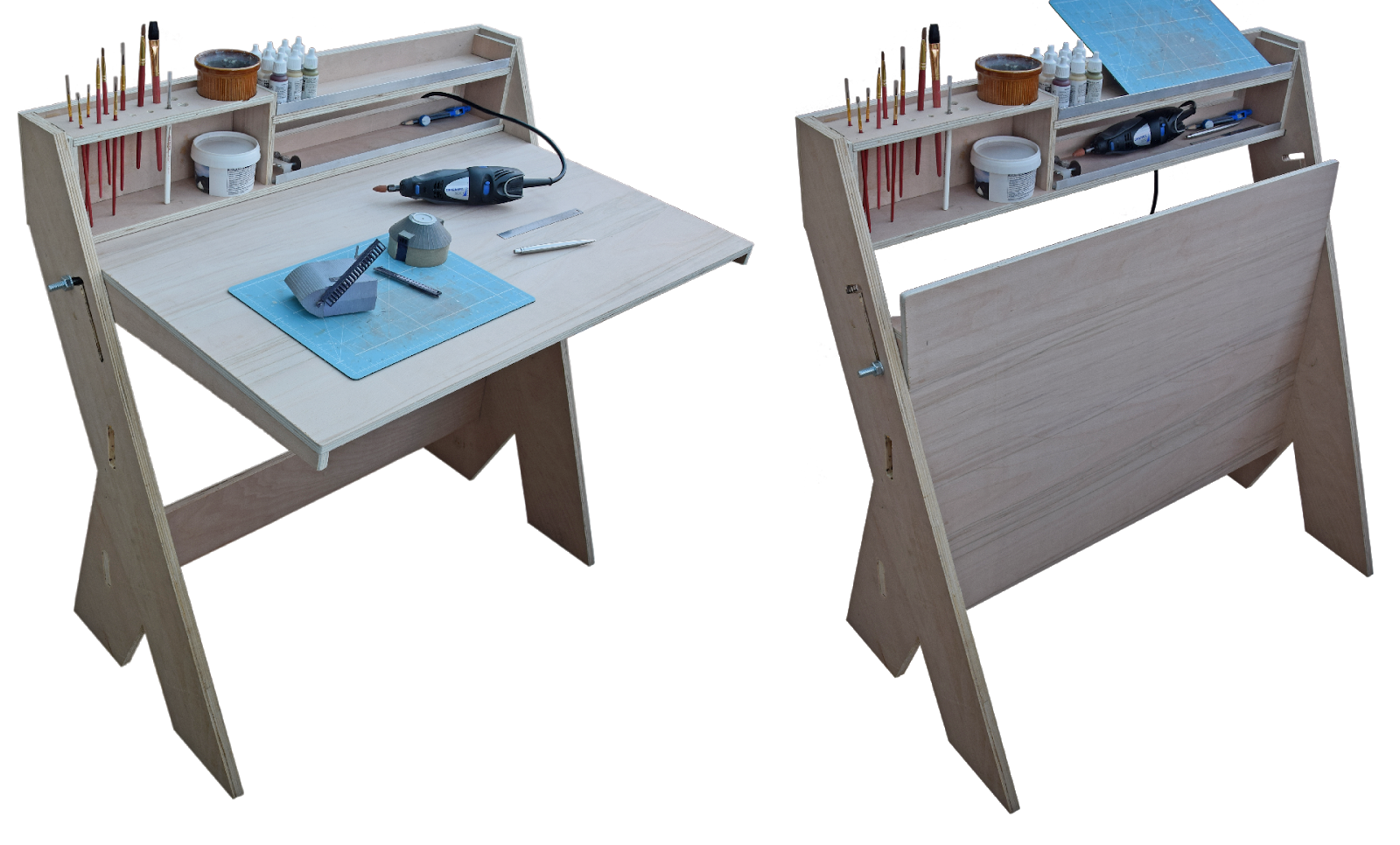 I really hope you've enjoyed following the design and construction of this folding modelmaking desk/bench, and perhaps it has even inspired you to build something similar!
Either way, I'd really appreciate likes, votes, and comments; be it positive or constructive. Next time, we'll be looking at what to do when you need to take a basic set-up on your travels...