Space is limited on the spit, hence the lack of a run-around loop; but the more pressing issue was the lack of room for a headshunt. Due to the soft foundations at this end of the spit, it was felt that a wooden trestle would be the best option; with long piles driven down into the sand until they hit a firm foundation. In the lines original guise as a construction railway for the lighthouse in the early 1850s, a temporary short line was built from the little harbour to the foreshore. Once the headshunt trestle was built, this would eventually be extended, and linked up with the rest of the railway; forming what we see today.

Designs were soon drafted up for the trestle... 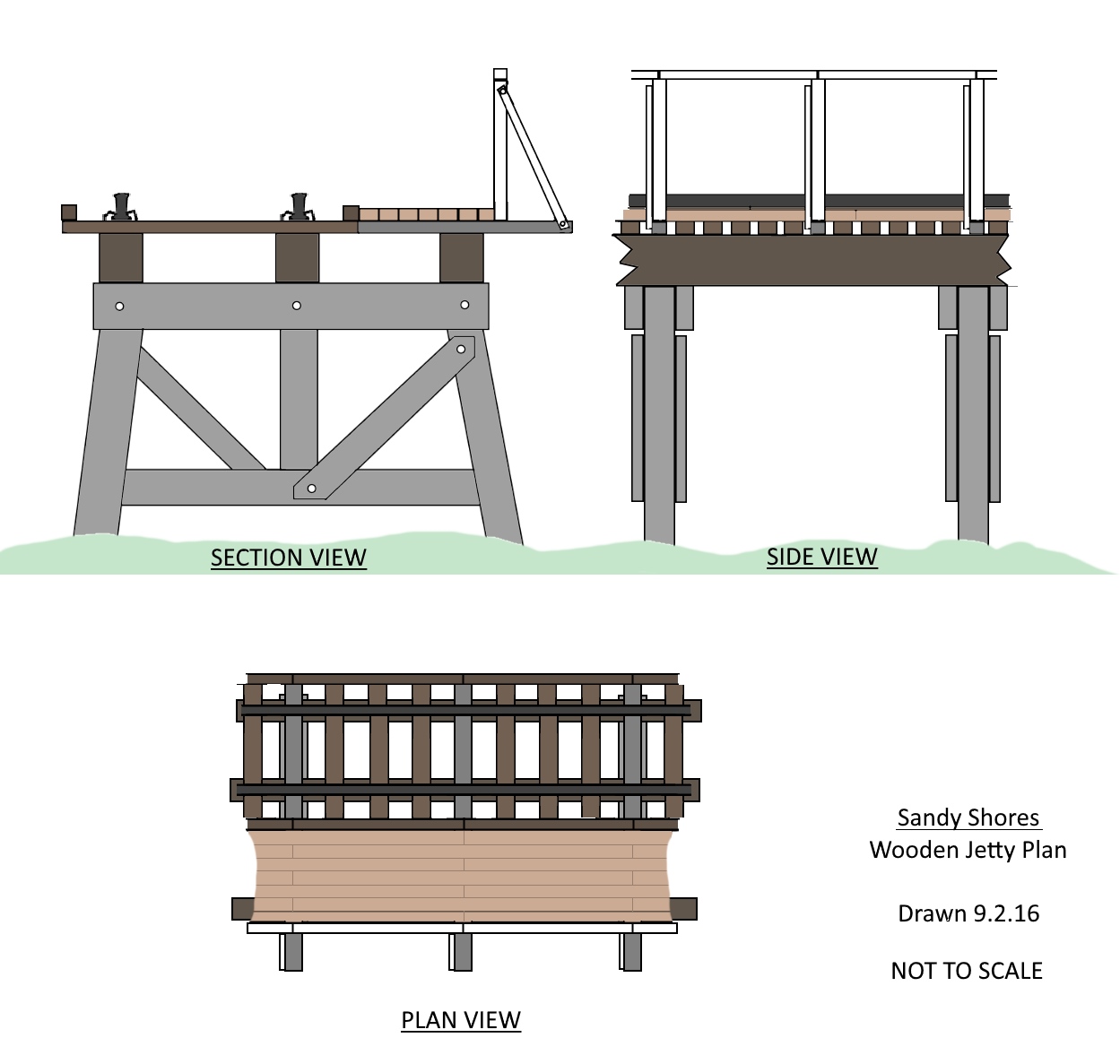 Above: In reality, the wooden jetty would need to look relatively substantial, but not so much that it defied the light railway idea. Trestles aren't exactly common in the UK, but after some research online I came up with what I thought was a plausible design. In the end, I totally forgot to extend the crossbars to allow for outer supports for the handrail, so the finished model looks a little wobbly in this regard. That said, I think it works with the whole bare-necessities approach of the SSLR! 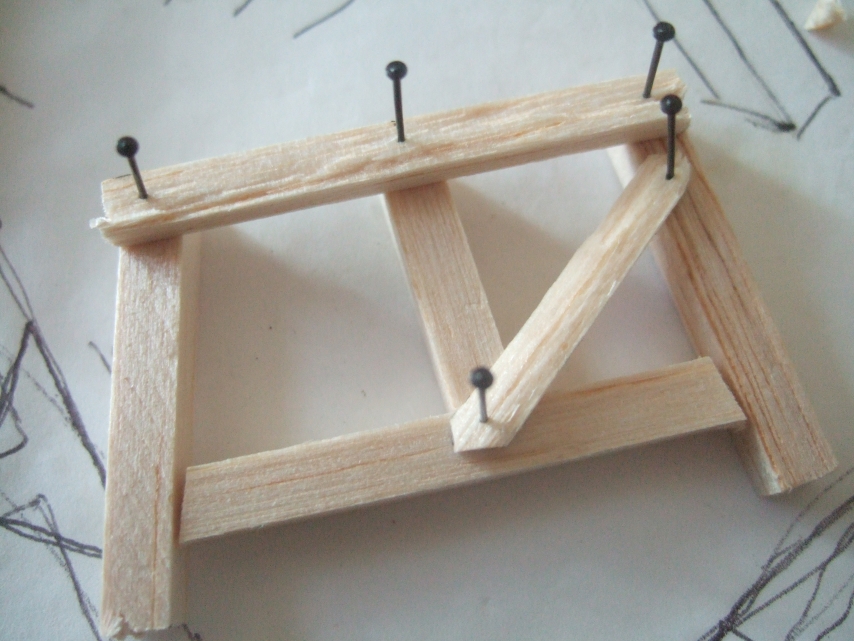 Above: The main timber baulks were actually cut from balsa, as I needed some relatively large pieces. Whilst I cut these with the same hand-held guillotine shown in previous entries, I would recommend cutting these with a little hacksaw or similar, as the soft nature of the balsa meant it was squashed more easily than it was cut; particularly on thicker sections. Note the trackpins used to represent bolt heads; a much better use for them than pinning down track, in my opinion! 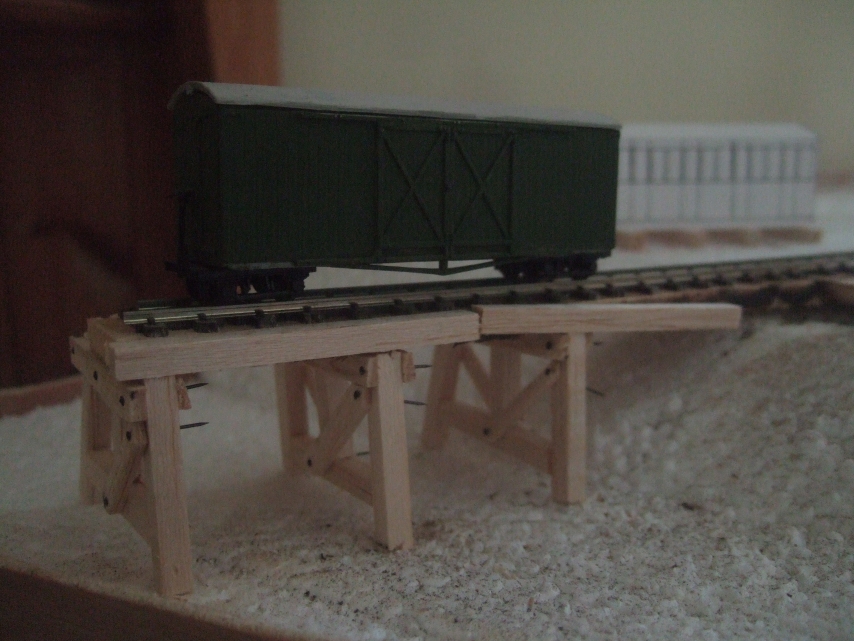 Above: With the basic trestle supports fabricated (and awaiting their pins to be cut to length), I tested out the construction by balancing it under the ply trackbed. It looked OK, but I realised that the ply trackbed would have to go, as well as the plastic webbing between the sleepers; as they would both be too obvious from both below and above. 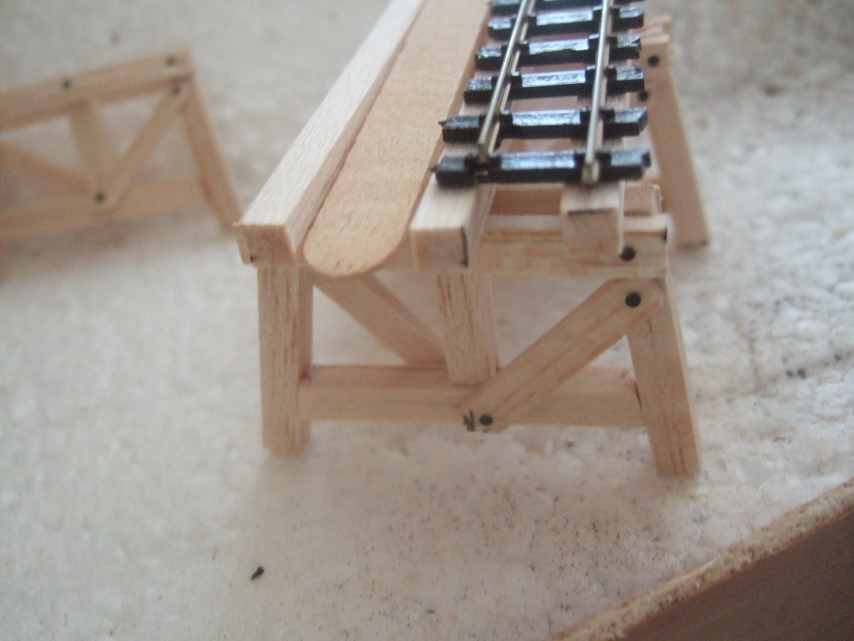 Above: With the trackbed cut away, a re-evaluation showed that the timber beams that would support the track were too far apart, so it was back to the design board... 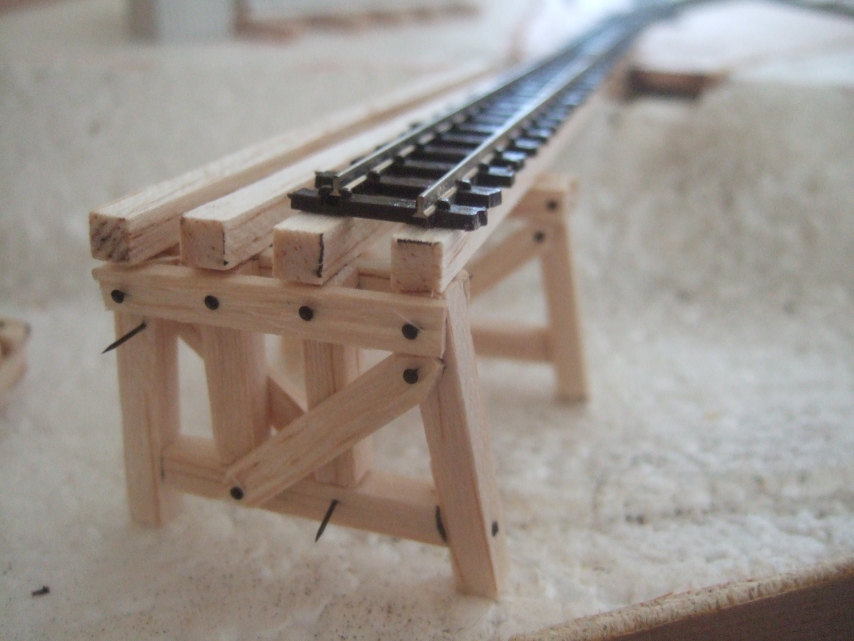 Above: The redesign saw the central post replaced with two instead; which allowed an additional longitudinal beam for the rail to sit directly on top of. 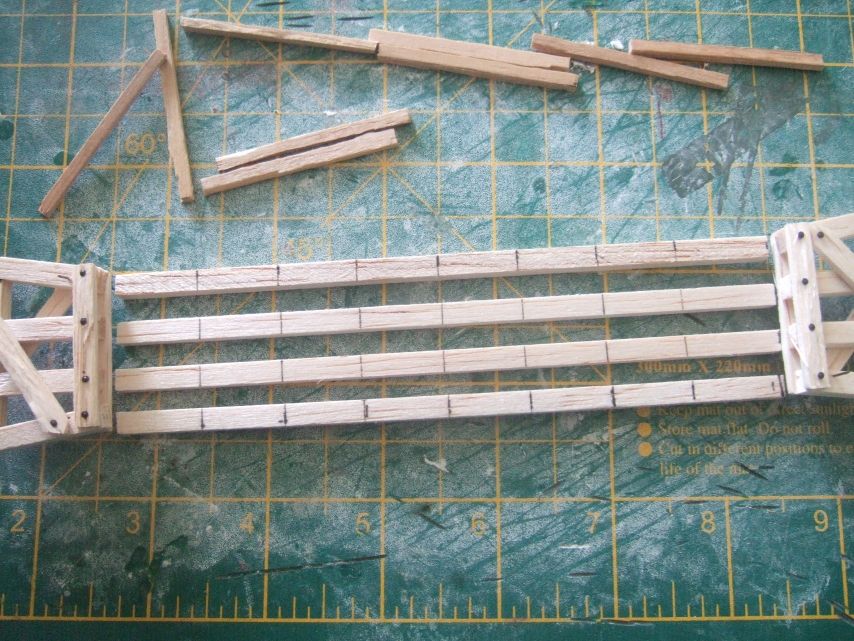 Above & below: Now that the trestle supports were in place, the locations of the extra long sleepers could be marked onto the longitudinal beams, and the sleepers cut from lollipop sticks. There were then glued in place with PVA, and left to cure overnight. 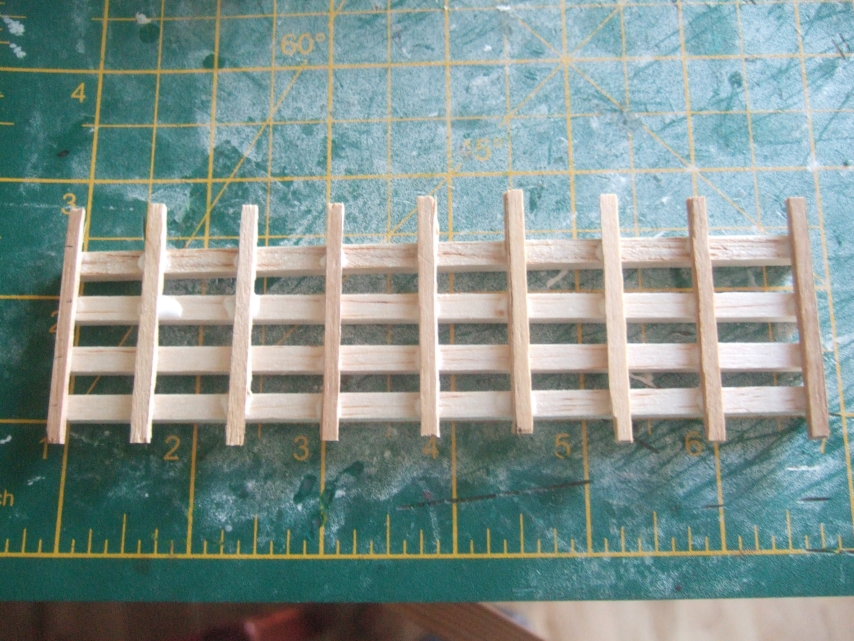 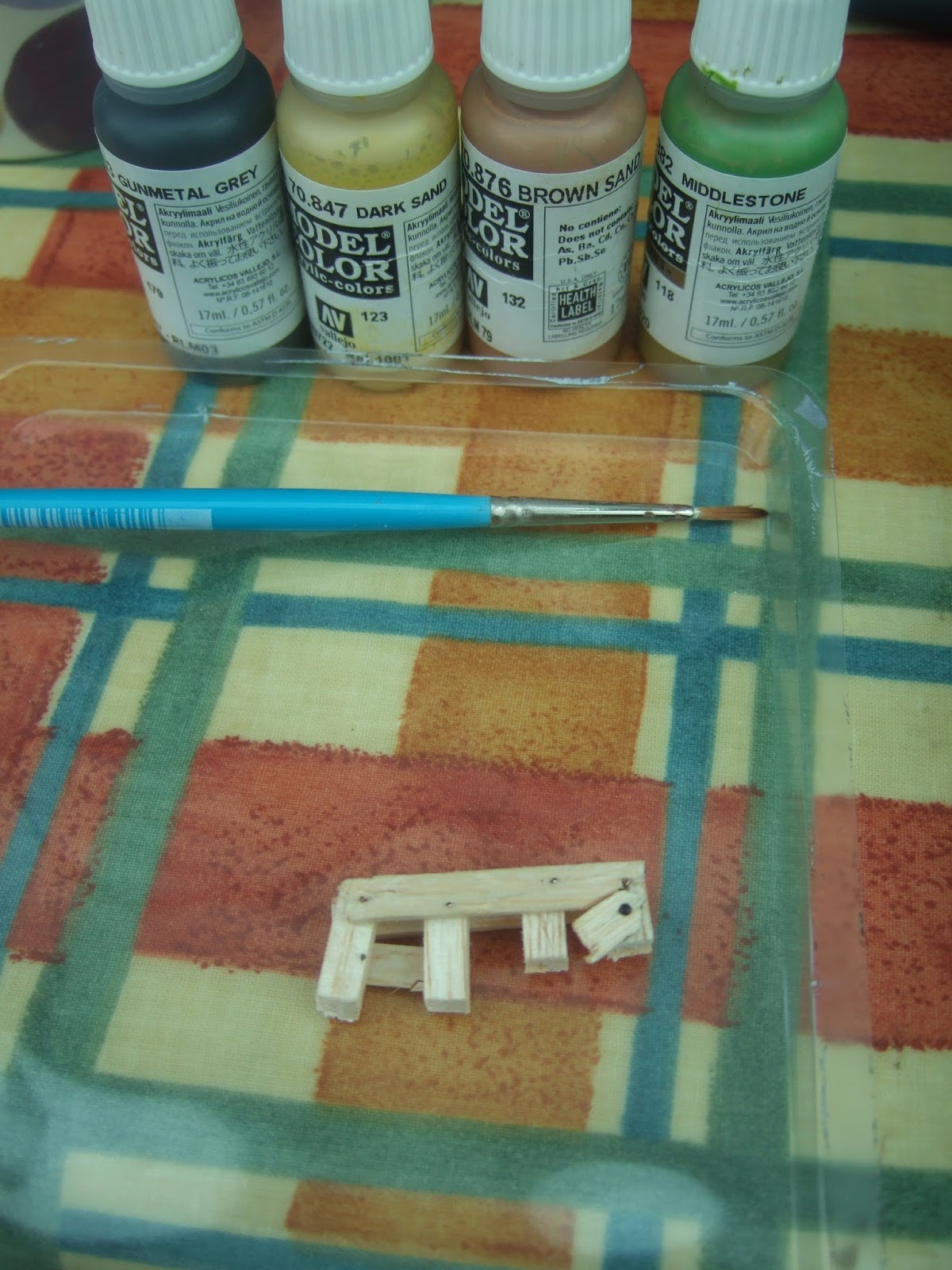 Above: With all the componets fabricated (excluding the handrails), it was time to tackle the painting stage. This was done before any of the other wooden structures on the layout, so at this point I had absolutely no clue what I was doing. As such, the first piece to be painted was the support pictured; this being the one that will be barely visible from most angles, as it will be sat under the far end of the bridge, half-buried in sand. 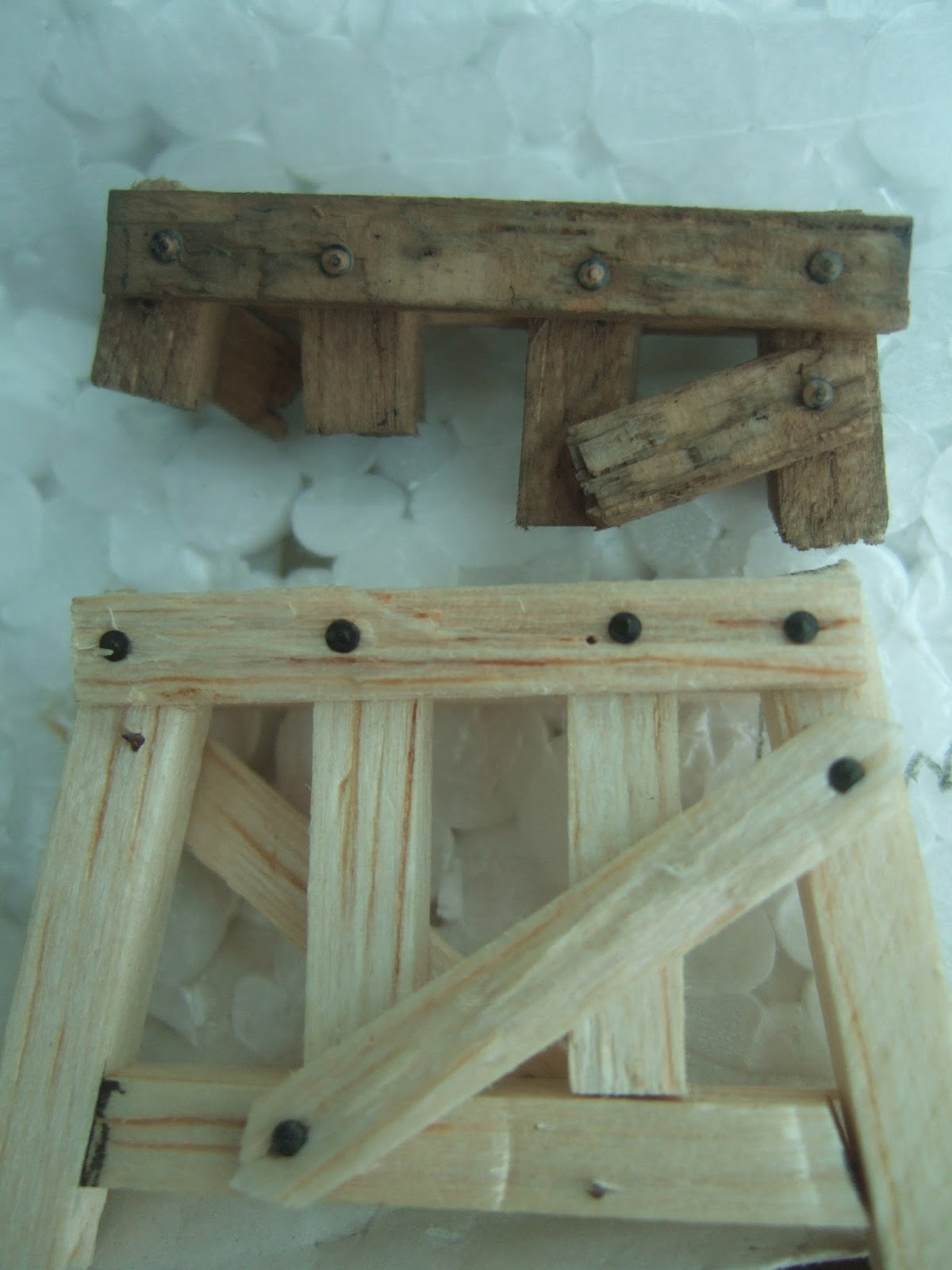 Above: The comparison between painted and unpainted is stark, and for a first attempt I was amazed at the results of a bit of experimentation! Before this point, I was not really one for experimentation, but this proved to me that everyone is right, and that I shouldn't be afraid to experiment with new techniques. As this was my first go, I didn't photograph the various steps, but I believe it to be similar to my later structures; a wash of gunmetal grey, a wash of a mix of dark sand and gunmetal grey, and then a thicker application of the two; along with extra washes/dry brushes of additional colours to weather it. 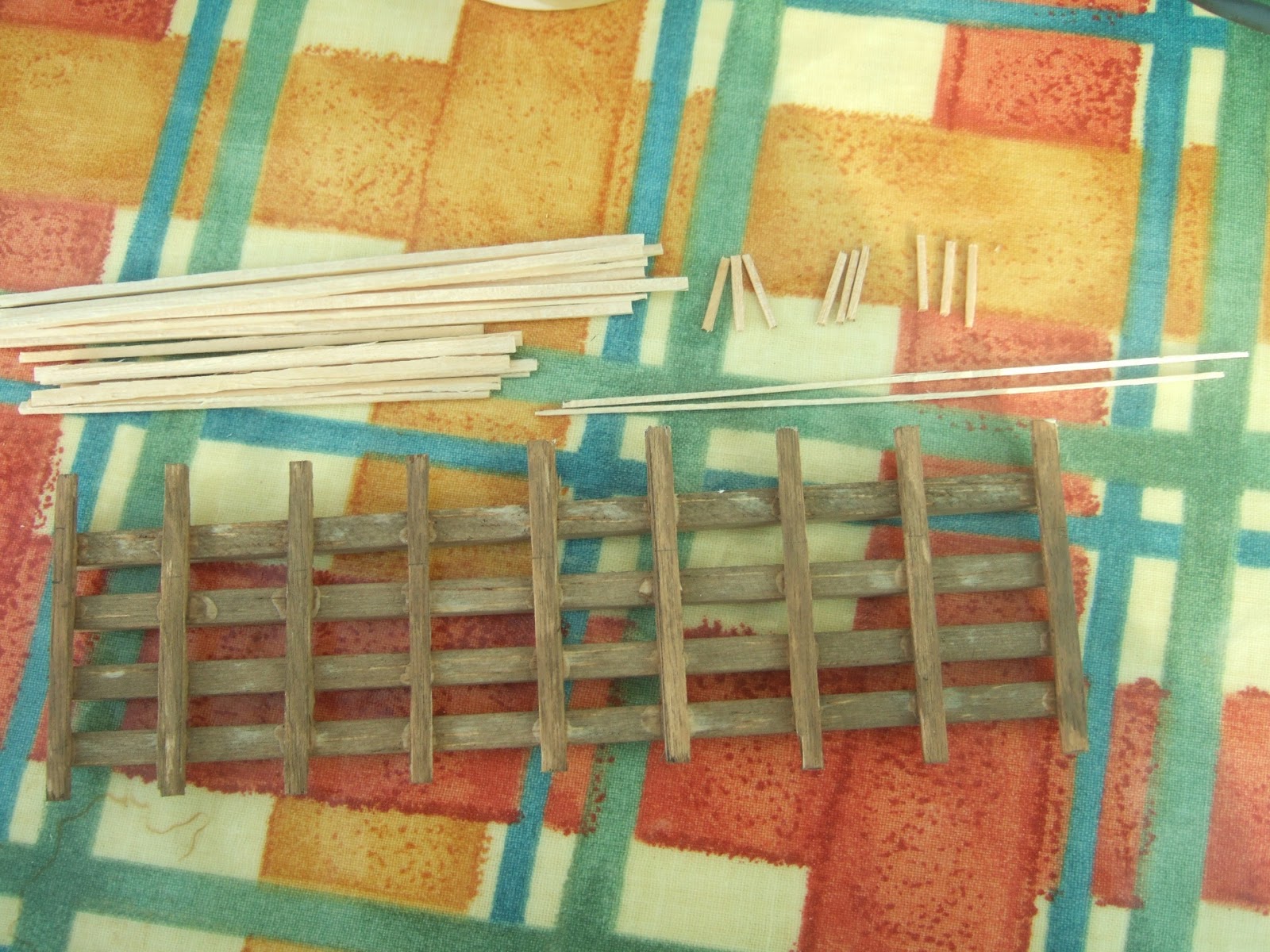 Above: Pleased with the painting, work cracked on to produce the rest of the components for the trestle; namely the walkway and handrail. There had been one attempt at a handrail by this point, but it was too chunky, so I elected to start afresh. The components for the handrail are top right, the walkway; top left. As you'd expect, these are all finely-chopped lengths of lollipop stick. 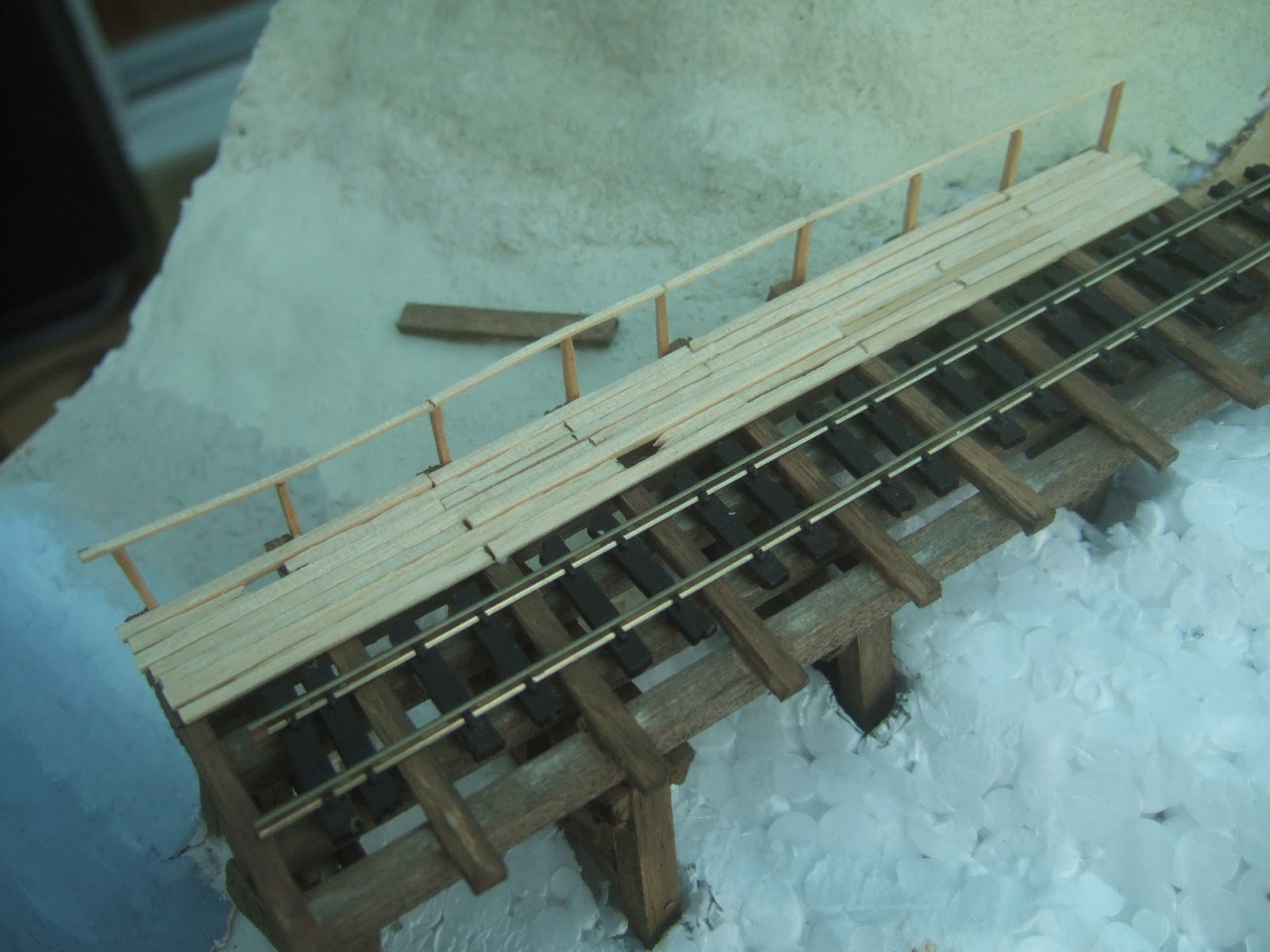 Above: After a while, all the planks were made, and glued into place; with some having bits broken off to add a bit of visual interest, and to help convey that tatty low-maintenance approach that the railway has! 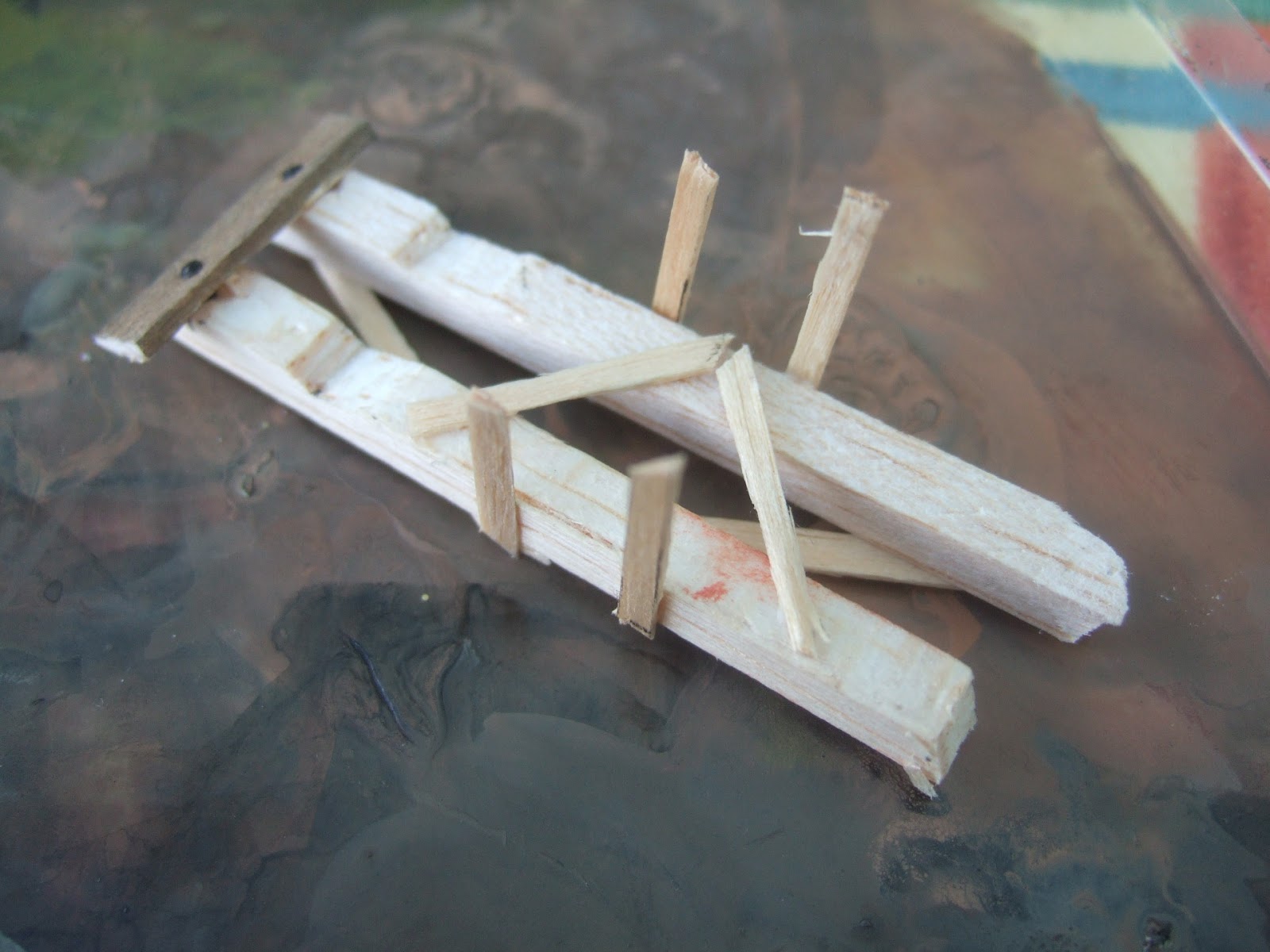 Above: Of course, I couldn't leave the railway without a way to prevent a perilous over-running at the end of the line, so a buffer stop was needed! I figured that there would be a need for a pretty substantial buffer stop, so in order to prevent runaways from entering the cold sea (i.e. preventing a disaster at exhibitions!), one was formed in a similar way to the trestle supports. Two large baulks of timber would form a sort of buttress at the end of the trestle, with a buffer stop located on the top of these beams. As you can see, plenty of cross-bracing was added from chopped up lollipop stick. 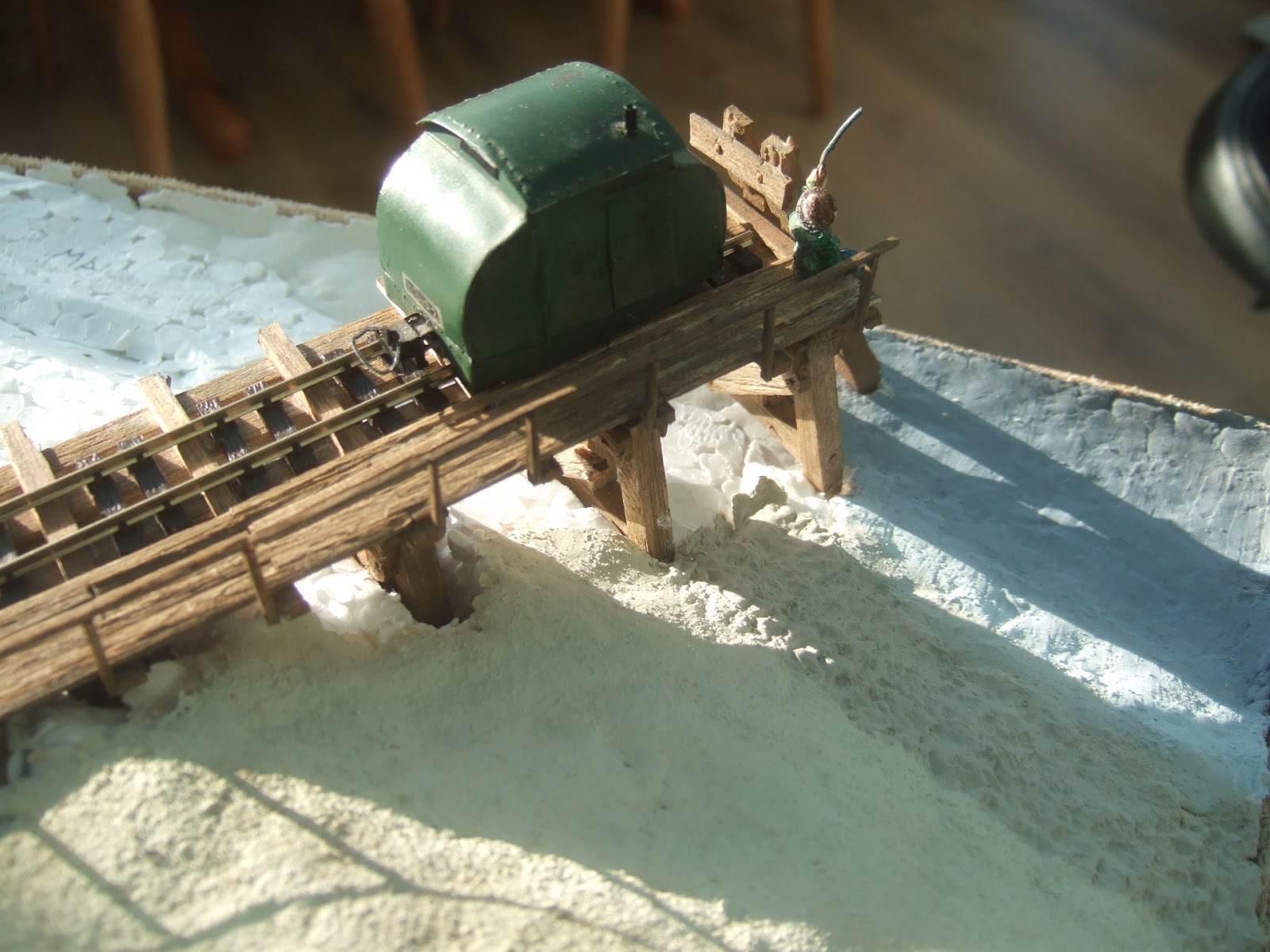 Above: Which left just one more thing to do; assemble it all, and bury the supports into the sand dune/sea!

It's not just the headshunt trestle that was made from balsa and lollipop sticks, and indeed, we've seen previously how the waiting shelter, grounded carriage, and grounded van were made. In fact, there are still plenty of other wooden structures on the layout made in the same way; so let's take a quick tour of some of them... 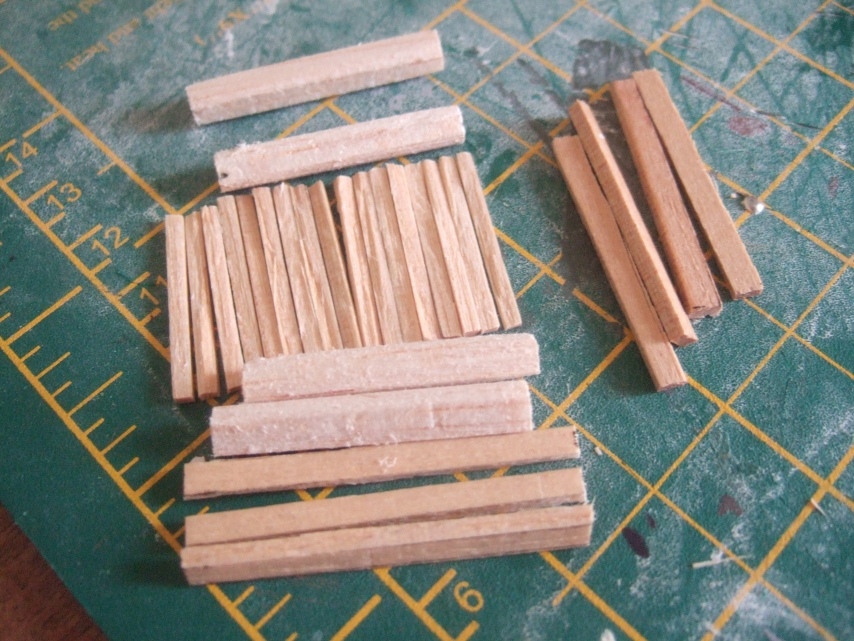 Above: By now, I'm starting to sound like a broken record; yes, those are more finely chopped lollipop sticks, along with 4 additonal balsa square sections... but what will it become? 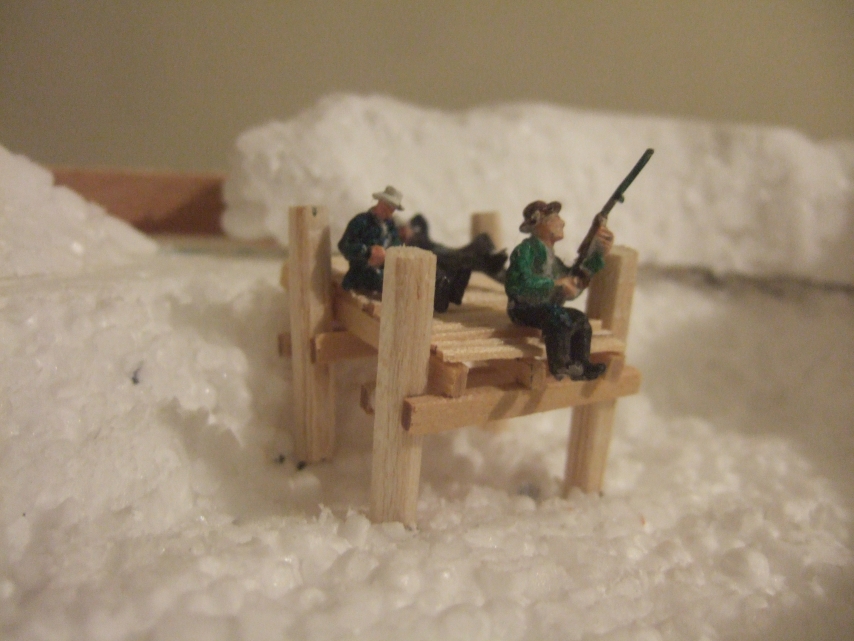 Above: The answer is a small wooden jetty for the pond! What's great about these small wooden structures is that they take such a small amount of time to make, but add a lot to bring life to the layout. Worth noting is that the deck (the planked section and its three supports) were not glued on until everything around it was complete; that includes the sand dunes, the vegetation, and the water. This meant I didn't have any problems accessing the area underneath the little jetty. Of course, this will be painted in the same way as all of the other wooden structures. 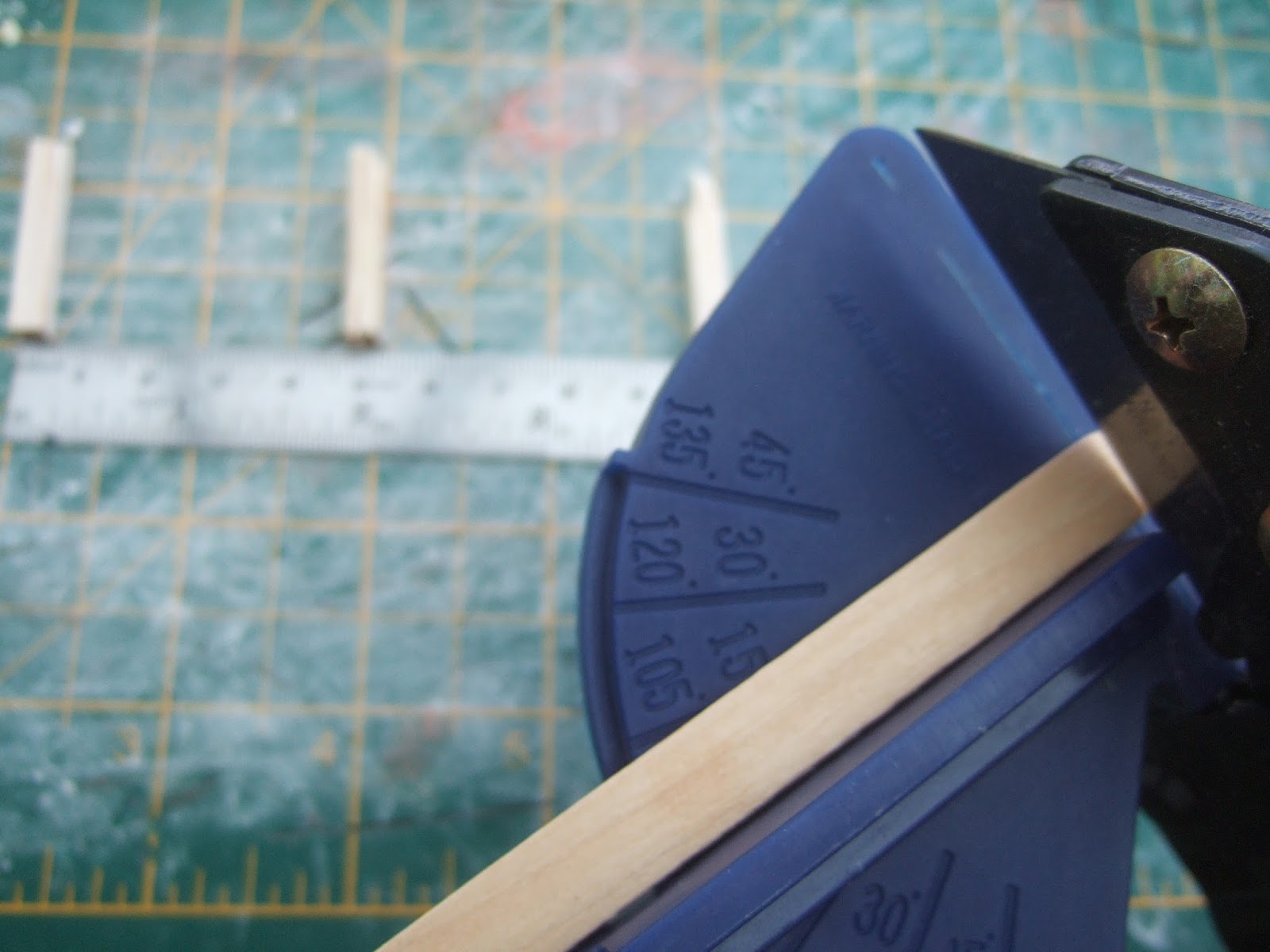 Above: And out comes the guillotine cutter once more! Yes, yet another lollipop stick is being cut to length. You'd think I'd have run out long ago, but the box I bought over 10 years ago is still half-full! These bits are actually destined to become part of the wooden groyne that will sit at the front of the layout. 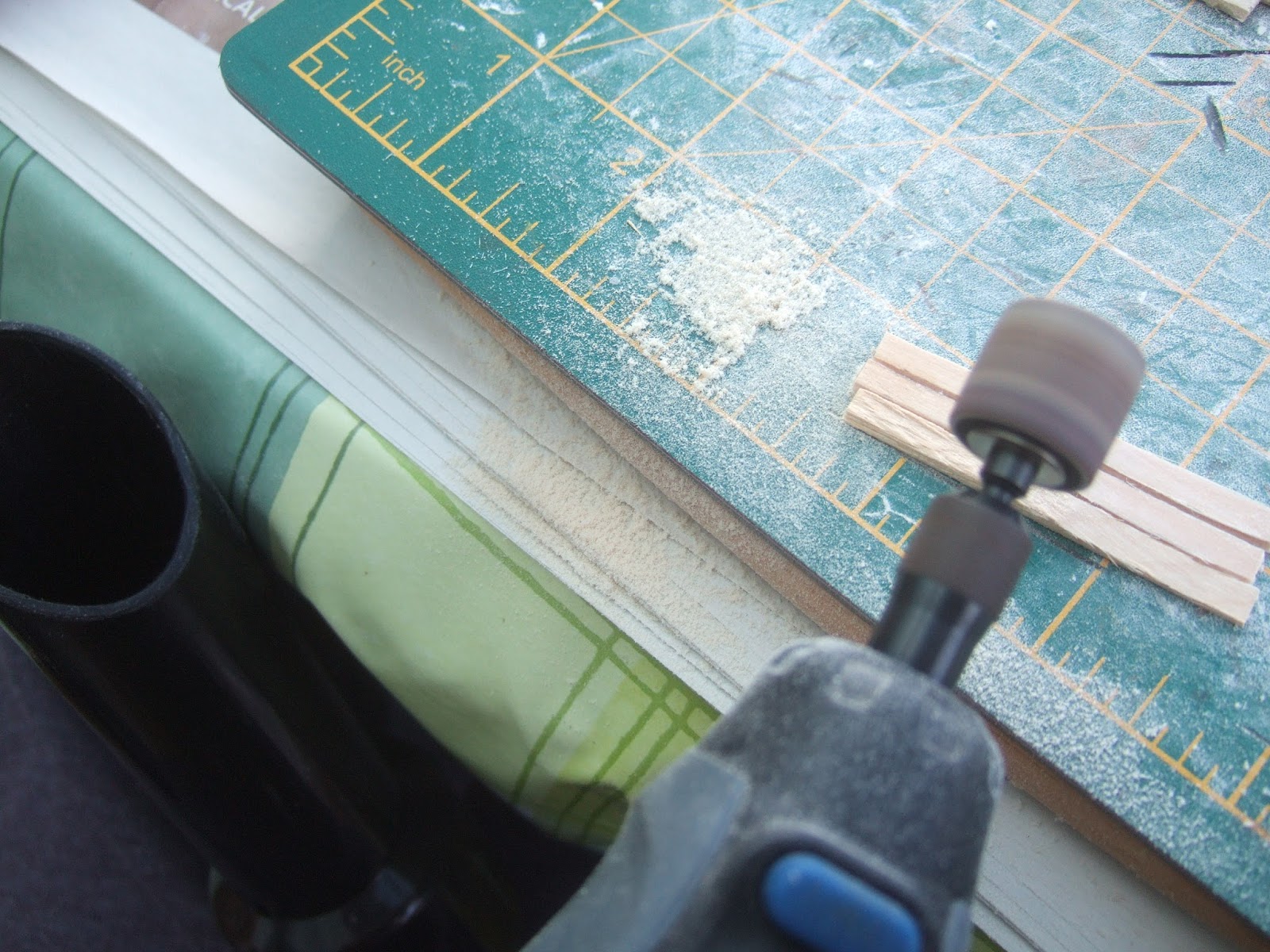 Above: This time though, I needed wide lengths that would be slightly thinner than the lollipop sticks themselves. This was easily achieved by sanding each length down with the sanding attachment on the Dremel. Note the vacuum hose (that has been turned on) on the left being held against the table by my leg; so that I create as little mess as possible! 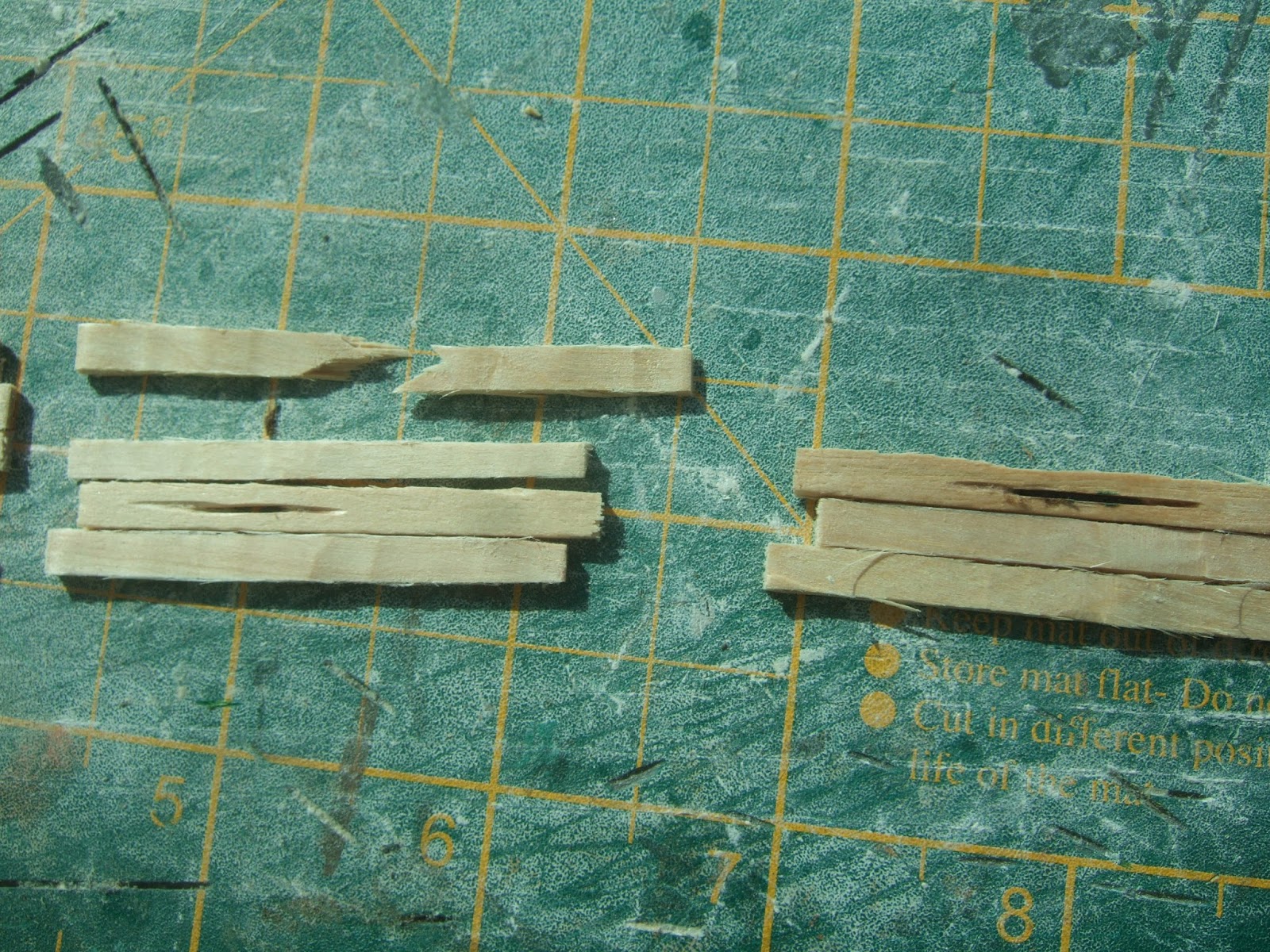 Above: As I will be modelling a somewhat wave-battered and decaying groyne, the components required extensive distressing. The uneven sanding is one way, but note how one length has been split into two, and two others have a slit in them; created with a cutting disc in the dremel. 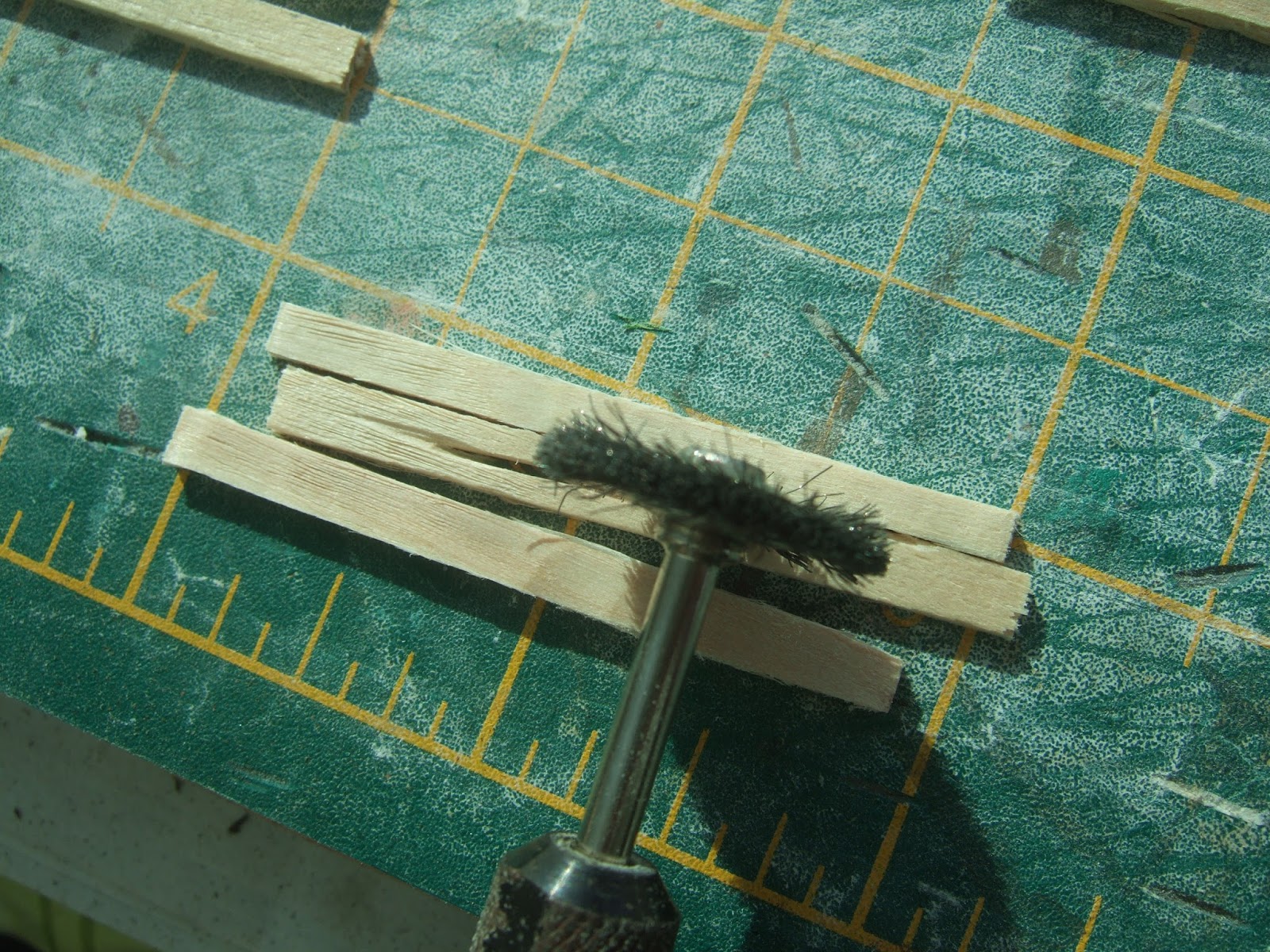 Above: Then comes the fun part; using a wire brush attachmenet in the Dremel, lines were scraped into the wooden lengths, concentrating heavily around the edges, and the areas around the holes. This creates a really nice pitted effect, and helps bring out the grain of the wood substantially... 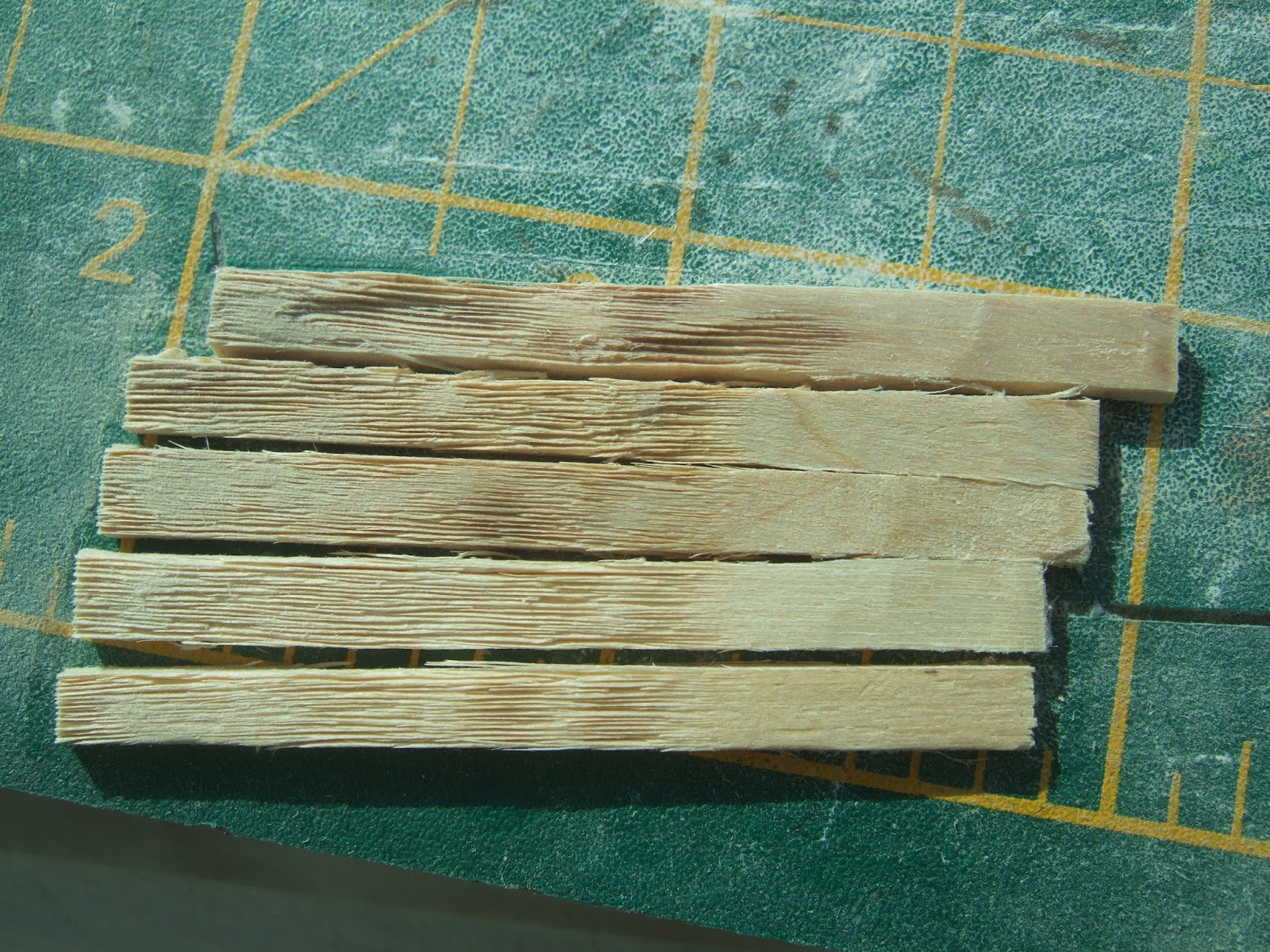 Above: ... the difference is quite prominent between the before and after! 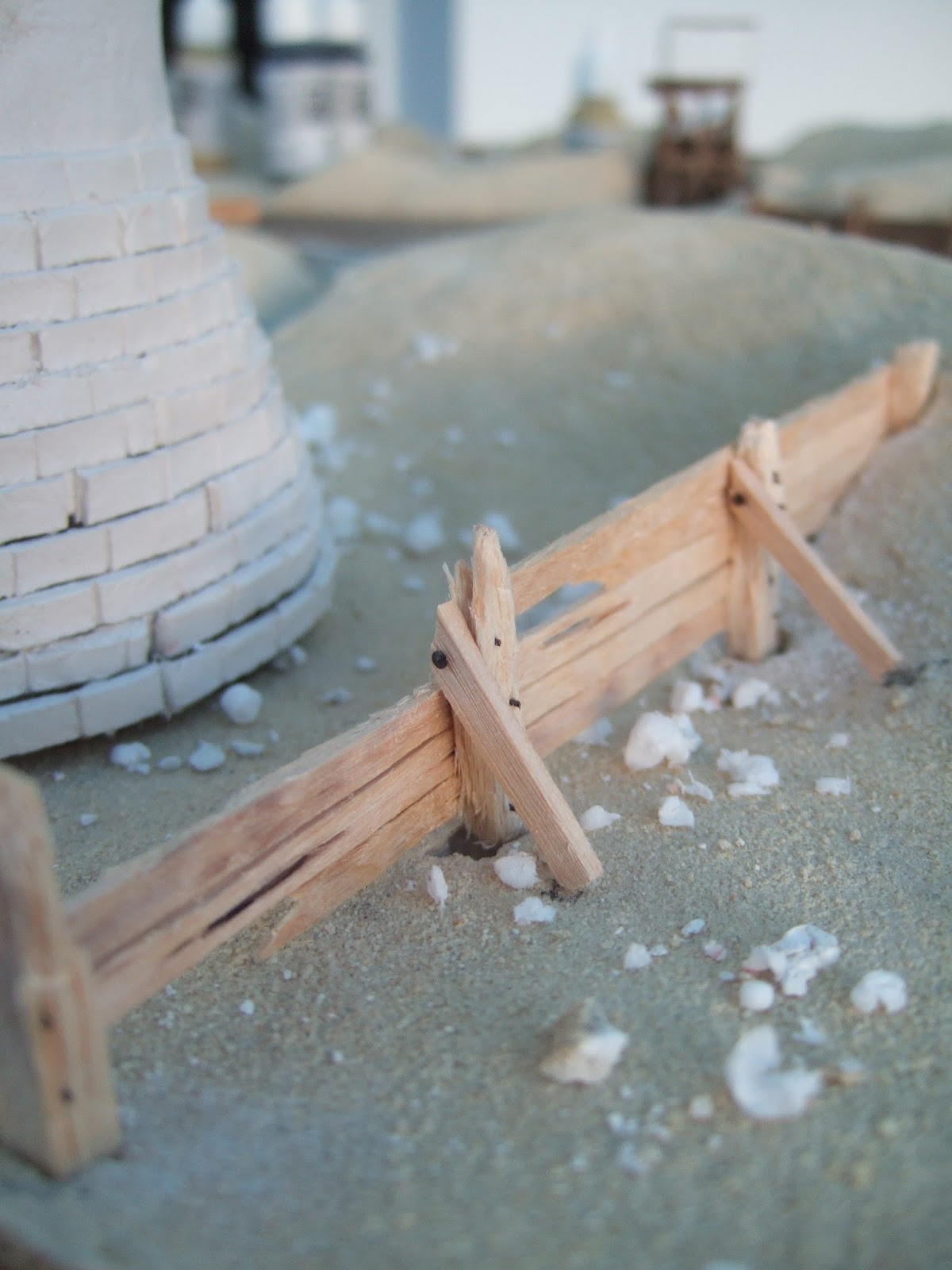 Above: The same was done to the balsa uprights; in fact, being soft, it was really easy to create some really extreme weathering with these; the tops of the posts being significantly damaged. The whole lot was asembled with glue, with track pins once again used to represent bolts. 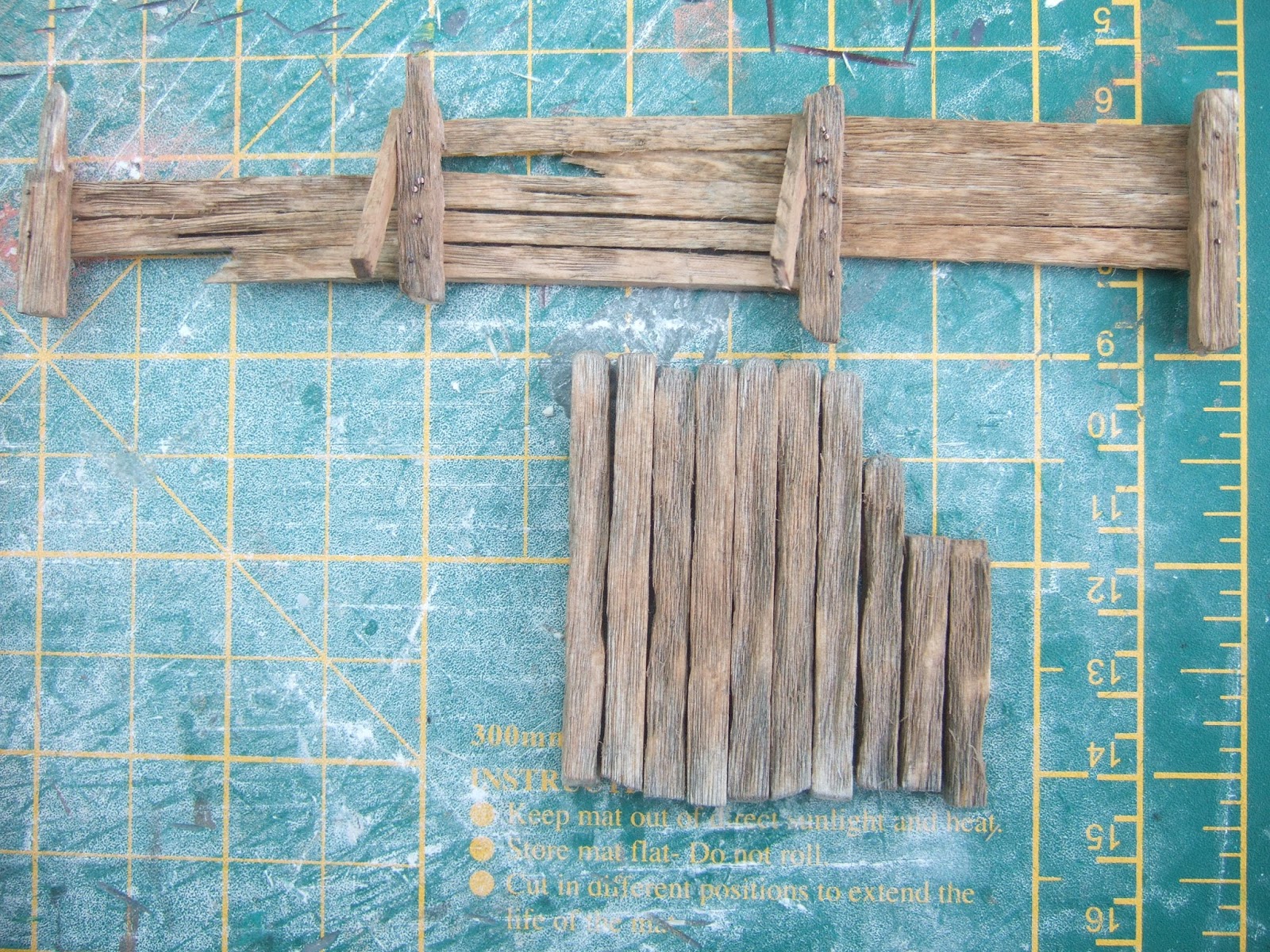 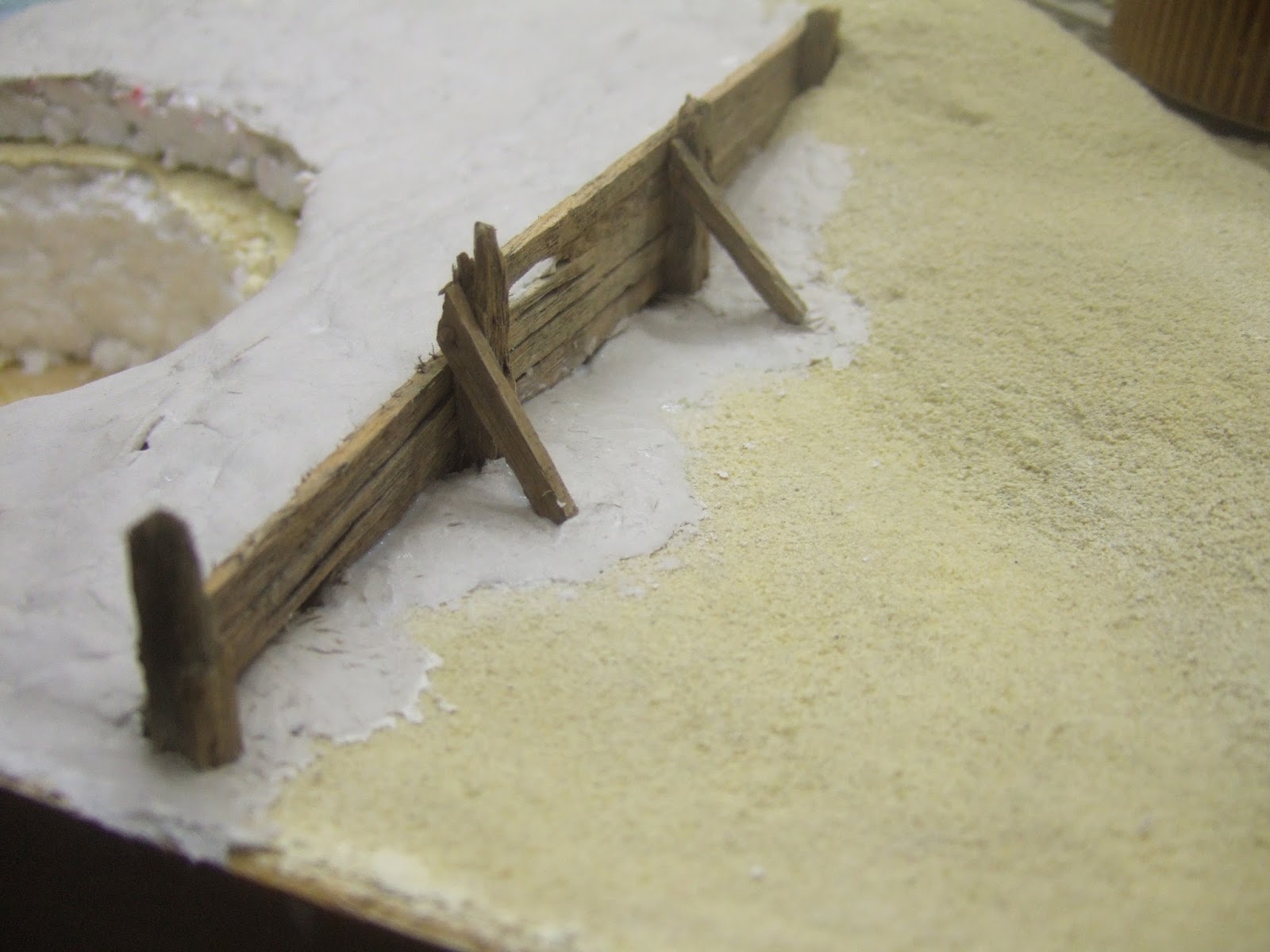 Above: Holes were formed in the beach for the groyne to sit into, and the beach was raised on one side of the groyne with a polystyrene layer. Clay was used to cover the whole lot, including surrounding the bottom to hide any gaps, and also to suggest sand that had spilled through the holes. 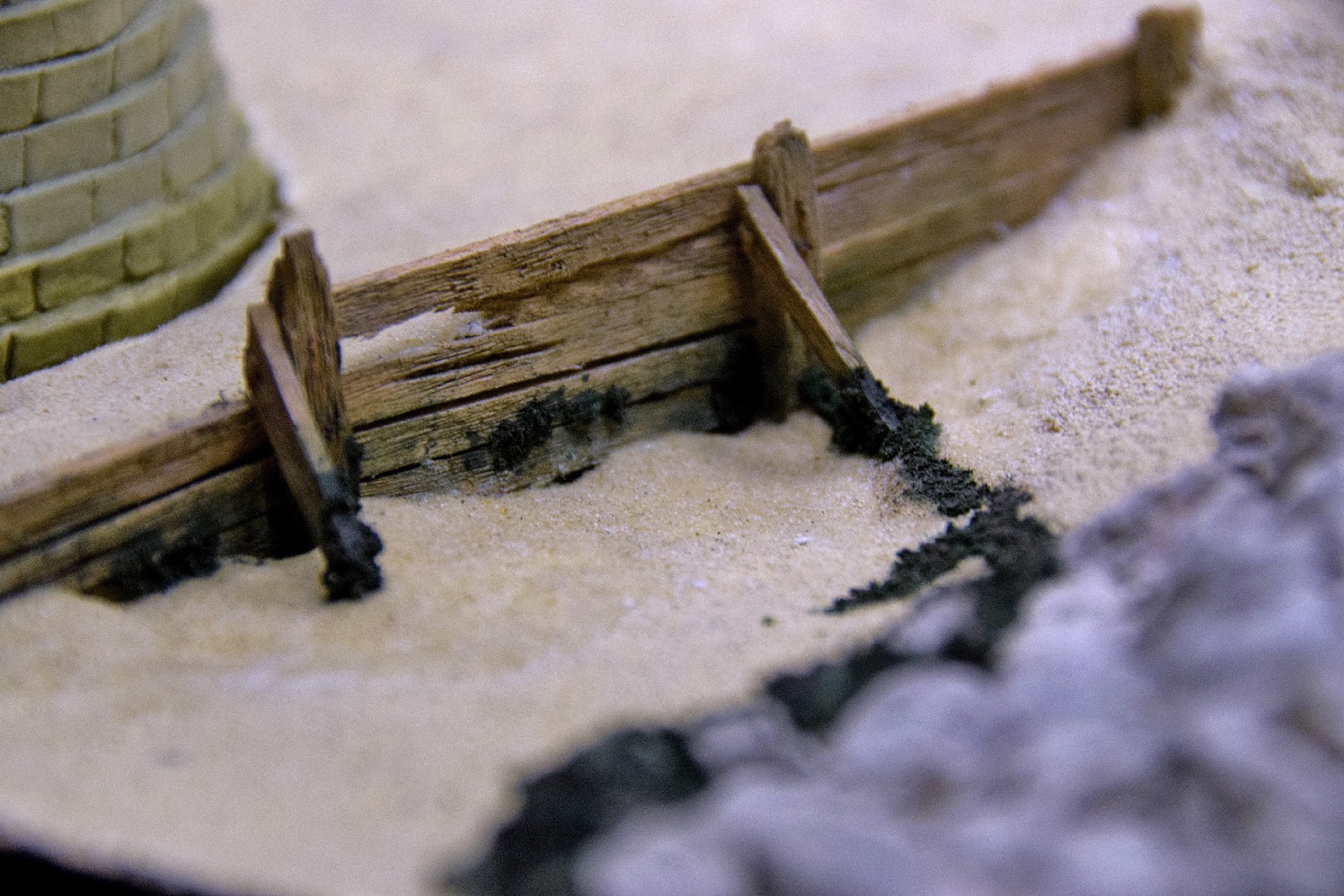 Above: To finish off the look, the bottom of the groyne was further weathered with a drybrush of green paint, and seaweed applied. The seaweed was made from old scatter mixed with green paint and then applied with PVA; I'll show this in more detail in another blog entry!

And there we have it; another bumper blog entry. Believe it or not, there are still some other wooden structures, but I don't think there is much more that can be explained that isn't documented here!
As always, I hope you have enjoyed this blog entry, and please do rate it, like it, or comment on it; I like to know that people are finding these entries useful, and if not, how I can improve them. If there is something particular that you want to see next, I will prioritise it. I suspect I ought to talk about the sand dunes and landforms next time, as a lot of photos have shown them already!

Till next time,
Jam/Jamie Warne

With a history dating back to 1852, come and ride our beautifully restored narrow gauge line as it winds its way through sand dunes. Sit back and relax; and enjoy the coastal views. Find out more about the history of the spit, or even get a tour of the old lighthouse! Click the links below to find out more...

The History of the Spit & Railway |
Board Design & Construction |
Track Laying & Wiring | Includes my first bit of handbuilt track!
The Importance of Mock-ups! |