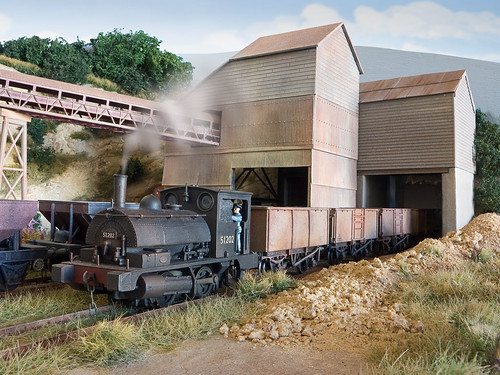 A tiny ex Lancashire & Yorkshire Railway Pug is captured shunting wagons through the loading screen at Cement Quay.This little loco I picked up on Ebay just over a year ago, it has since had a repaint, a renumber to one of Radstock's shunters, a little extra detail and a dose weathering.

After completing the above and being an 0-4-0 I wasn't expecting the best performance, with some sticking, wobble and jerkiness due to just 4 wheels. But, after a good run in and widening the wheels to the non-OO spec back to back of 14.7mm it runs a dream through all sorts of track from Peco to handbuilt C & L. I'm sure the widening is the key because the reduced side to to side play has improved electrical pick up. I notice too that this little loco is again part of Hornby's 2011 range. All we need now is one of the keen cottage etchers to produce a replacment cab, the plastic one looking rather too thick, just cabside overlays would do - any takers?