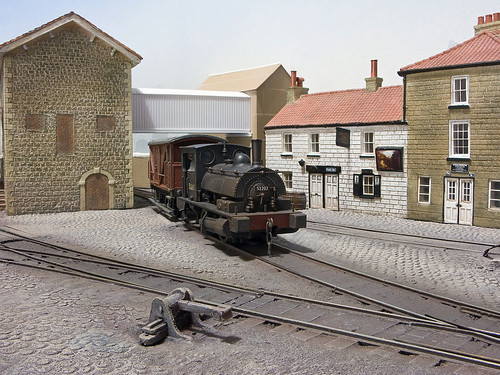 Brewhouse Quay Project: The brewery management (Foster, Dent, Marriott & Jones Celebrated Ales) are captured there having their bi-monthly tour of inspection in their recently purchased ex-LSWR brake van that was found on the Isle of Wight. Well actually, they're in the brewery tap on the right so that's why they're not in shot.

The real reason for this snap is to show off the new aerial walkway and associated building knocked up from the plastic card and foam board. It's been primarily built to serve as an additional scenic break. I've used different material to the brewery buildings because there's no way that I'll be able to match what Messrs Bachmann and Co. and the skilled Chinese workers have produced. Obviously it still needs to be painted.

The Caboose Hobbies actual working ground throw is showcased nicely here and much much bigger than it is in real life. With hindsight I maybe should have chosen to use the N gauge ones as recommended by Mr Burkin in April 2010 Model Rail instead of the HO scale one here. I'm not going to lose any sleep over that, and in any case not every operator will have tiny fingers.

I don't always post here, but you can catch up here http://nevardmedia.b...h/label/Brewery