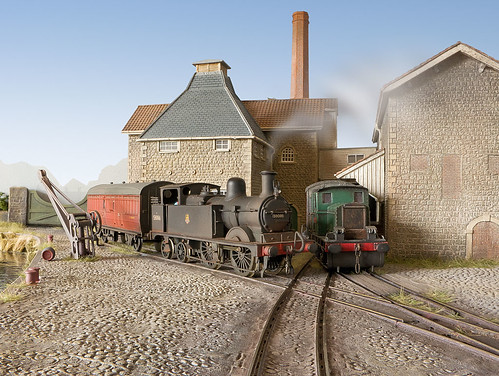 This ancient 0-4-4 Midland 1P spent much of its working life on 'the Branch' of the old Somerset & Dorset Line. The pretty loco was withdrawn in 1959 and spent much of the following year next to the water softening plant at Bath Green Park shed awaiting removal - or so we were all lead to believe!

In November 1960 the Marriott, Dent & Foster Brewery bought the locomotive to shunt its extensive quayside sidings because of of the directors was a railway buff. Then in 1968 when Courage took over the brewery, the loco was bought by an American investor and has since been a stuffed tiger at a railroad museum in Arkansas in the USA.

With the renewed interest in the former S&DJR becoming 'global' due to press hype in the British modelling and full sized railway press, it is hoped to repatriate to the engine to the UK for the fledgeling 'Moors Railway' project near the site of Edington Junction near Highbridge.