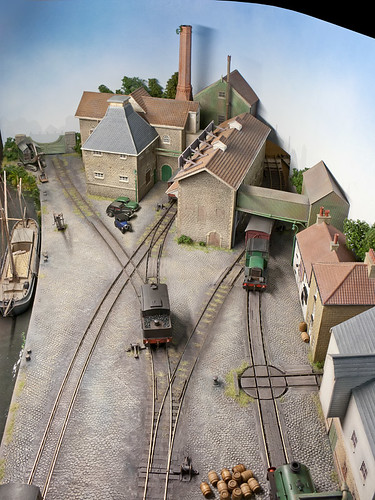 Here's an angle you won't normally be able to see unless you peer over the end of Brewhouse Quay behind the lighting rig. From this angle, the track layout can be observed to full effect including the wagon turntable which links to a siding that runs out right through the backscene to the other side to allow a little fun swapping wagons around.

Very shortly, the line in the centre foreground will be extended towards the photographer's groin, between 2 buildings out of shot and through the backscene to another small fiddle yard which has yet to be constructed.

The 2 lines that disappear behind the brewery buildings run through to a hidden sector plate which links to further sidings behind the backscene.

Hopefully all the above will provide a margin of excitement and entertainment that will keep the poor operator amused for maybe 4 or 5 minutes before going terminally mad from the shear boredom of pushing wagons to and fro in a random manner. Clever people would think of some kind of shunting puzzle to make some purpose, but with most viewers only watching a layout for a couple of minutes maximum (the gold fish bowl theory), and operational-apathy on behalf of muggins here, such excessive organisational indulgence could be wasted?