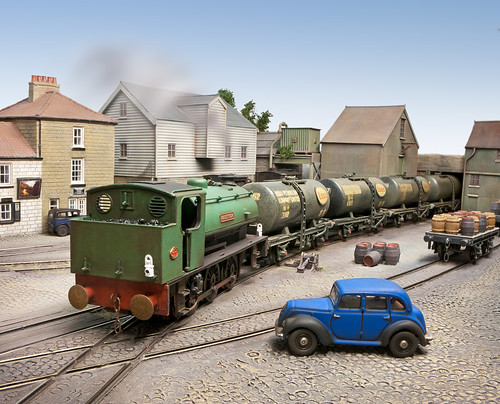 Upon my return to the hobby a decade of so ago, a very kind gent sold me around 50 kit-built wagons and half a dozen Maunsell and Bulleid passenger carriages for the price of a round of drinks. As required, I've been slowly refurbishing selected items to bring them a little closer to current standards.

Behind Radstock (with oversize buffers from Gibsons to avoid buffer lock on sharp wharf curves) we have a rake of kit-built tank wagons from Airfix, the rumour being to fire up the new oil fired brewing coppers due to a major investment by Courage, who by 1964 were a major shareholder within the Marriott, Dent & Foster Brewery.

Back the wagons, the jury is still out as to whether I'll bother doing anything with these, the weathering is very clumsy by today's standards (dirty thinners weathering being very passe don't you know?), the ladders are very thick plastic and the tranfers looks like they've been applied to a matt finish due to the haze under them. To be honest, it will be a lot less work to start fresh with some new kits or ready to run, but they serve their purpose for this shot as long as one doesn't look too closely. The little blue Morris (76MES001 Blue Morris 8 E) is a toned down model from Oxford Diecast hopefully draws the eyes away too! Click on the photo above for a bigger view.