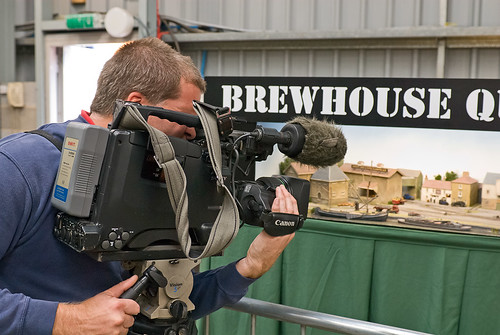 Thank you to all who popped by to say "Hi" at Model Rail Live over the weekend at Barrow Hill Round House whilst exhibiting Brewhouse Quay for it's inaugural outing. I've never been to a show quite like this with indoor and out door exhibits. This made an unusual mix to appeal to fans of all railways whether miniature or full sized. It also made a great day out for families with the addition of train rides and even face painting for the little ones.

I was surprised and indeed chuffed to meet for real so many readers of this blog, which now makes me realise that people actually do read it - I must be more careful before commenting on people with beige cars who live in bungalows in future. I also hope after my excessive postings about this little 4x2 foot trainset weren't too much of a disappointment for those who saw it for real.

Thank you also to the rest of the Model Rail team right next door who were handed the controller and three link coupling hook from time to time to allow me to escape for the obligatory chips with curry sauce and the all important tea! I have never seen a more terrified look than when I handed the operational tools of 'BQ' over to Chris Leigh and said "you'll be fine!".

Thank you to the Barrow Hill posse who made us very welcome, which even extended to an impromptu pub crawl of Chesterfield's bright-night spots, the highlight observing the antics of 'yoof' taking part in a never ending carnival of hen and stag parties from the safety of an Indian restaurant in the town centre.

Before I go, yes, the chain capstan/wagon turntable shunting worked a dream after a little practice - Mr Tele-Rail recording the process as proof! Trick? File a couple of tiny notches onto the turntable rails near the perimeter to stop the wagon rolling off!

Brewhouse Quay will be shown next at Railex in May 2012 and Wycrail in November 2012. I might pop it into the boot of the car for a rebel car park showing at Scaleforum this coming weekend - I won't tell the organisers if you don't - hush hush....