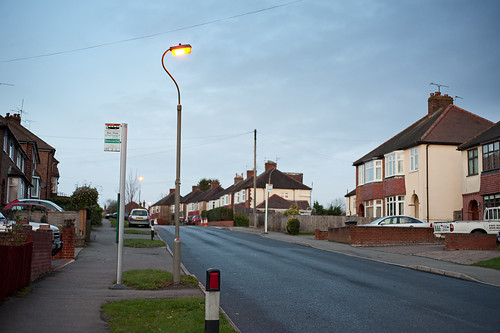 This post isn't strictly about model railways, but an interest and understanding of the real world I think helps to make us better model makers. Lights like this are a doddle to make of course.

As a model maker of mostly historical scenarios, I'm always on the look out for bits of 'olde England' to record for posterity to aid model making. Currently in Surrey, older street lighting is being updated with new low energy systems which can be controlled and monitored from a central remote point, the outcome being that power will be saved and failed lighting easily pin-pointed.

In residential areas like the above in Guildford the familiar rich orange coloured low pressure sodium lights (known by lighting aficionados as SOX) are being replaced with white flourescent lamps, and on busier roads, pink high pressure sodium lamps (SON) are rapidly taking over due to a longer life and a slightly less overpowering monochromatic effect on colours.

Sadly though it's not just a case of replacing the bulbs and control gear because many of the columns are suffering from internal corrosion and could be a danger hazard. This means that lights like the above are repidly becoming a thing of the past, with Rydes Hill in Guildford being one of the few roads left with these 1960's Stewart & Lloyd lights as I type this.

When the above Corby manufactured lights were new, they would have probably had mercury vapour lamps emitting that familiar blue-green glow which would have been replaced with the 35w sodium lamps seen here in more recent times. Whilst it's sad to see these lights go, environmentally the newer 'white' lighting in residential areas does make for a more pleasant experience, like many I've never liked that sodium glow that works past any gaps in the bedroom curtains. As the orange sodium-polluted sky gets replaced with a soft whitish-green hue in the side roads, in a funny kind of way the effect is quite retro and must be more like those night-skies of the 1950's when mercury and tungsten mostly lit the way.