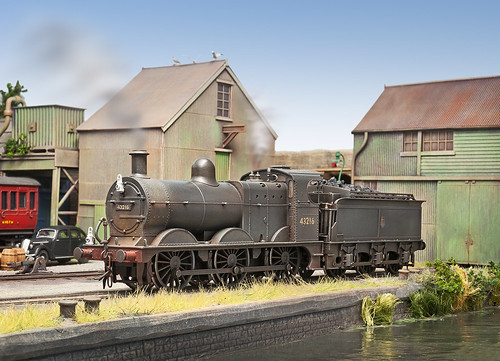 The new Bachmann 3F you may recall from before Christmas, has now received its final session of weathering after a renumbering to Templecombe's 43216. I tend to weather engines in stages, breaking for a day to two to appraise the effect under the layout's lighting and how it looks in relation to the layout and other stock. I like to get a uniform but not necessarily totally even look between engines and other items of rolling stock so nothing stands out too much.

After looking at several colour photographs of this particular engine on the former SDJR I noticed that the smokebox area was frequently rusty, probably due to excessive heat effecting the paint. Apart from that, they had a slightly oily sticky appearance which would have attracted soot and grime. "Imagine Christmas Pudding smeared all over the engine rather than Barry Scrapyard" I recall somebody many years ago saying down a railway club.

This is a good looking engine, especially now a bit of fake patina really highlights the fine detail. But one thing I hadn't really noticed until last night when weathering the tender frames, was the crazy positioning of the tender brake shoes, despite reading about them but obviously not taking on board the recent excellent Model Rail review on this very subject.

If you click on the link below to bring up a bigger photo, it's very obvious that the brake shoes are flush with the tender frame sides and nowhere near the wheels. They're so far out that I'm sure sure even if it was regauged to Irish broad gauge they wouldn't be anywhere near!

As yet I haven't done anything about this, but now the weathering tends to highlight the flaw even more so, in due I'll be ordering some bits from one of the plethora of men-in-shed-suppliers to address what I'm hoping will just be a matter of cutting the shoes away and replacing with some brass or white metal bits.

Anyway, above we have the usual pretty photo, today's one being of the grubby little fella complete with my usual load of old bull;

'After working the empty return trip from Bath Green Park Goods down to the sidings at Brewhouse Quay, we see Templecombe's 43216 resting before the fully loaded return trip. This trip, the last of the day was always popular with certain crews if near the end of shift (Drivers mainly!) because it left at 7.15pm which allowed for a few pints in the nearby brewery tap bar; the fireman was then given the dubious honour of driving the loco back to Bath Goods!