Thought it might be time to say a few word on here about the thing that's been taking up most of my modelling time since last June.

The Esso depot at Hayle North Quay was laid with a kicked back siding. As the quay had no run-round, it could only be worked using a shunting tractor... so my layout needs one of those.

It might have been nice to just get on with building the layout and worry about this later but that's really not going to work - the tractor is too small to have an on-board drive so it needs to be driven from below ground and the drive system needs to be designed and tested before the baseboard can be built... so building and testing a mockup is what I've been doing.

I need to thank Laurie Adams, John Greenwood and Pixie of this parish, all of whom have provided some of the inspiration for this and in Laurie's case a lot of in-depth info about how his tractor works... but my drive system is not the same as any of theirs.

The drive uses an old curtain rail which is curved to follow the line of the Esso siding. A stepper motor and toothed belt moves a carriage to and fro. The carriage has a swing arm to allow the tractor to move about 40mm either side of the siding and a swivelling magnet carrier which allows the tractor to point in any direction. An Arduino Mega and a bunch of stepper motor drive electronics control the whole thing and attempts to make it move in a realistic manner.

I won't bore you with the details, let's just say that it's complicated and it's taken a long time to get it this far. It's not yet moving perfectly but it's doing well enough that I'm sufficiently confident that it will work that I can move on to other things. It will need more tweaking when it's installed under the real layout.

The tractor... or the mockup tractor anyway

The inevitable video with me at the wheel... if you can stand watching 2 minutes of it.

An overview of the contraption with the lid off... this is NOT the real baseboard.

I'm going to be modelling a 4WD vehicle from the same manufacturer. Rule 1 and all that. 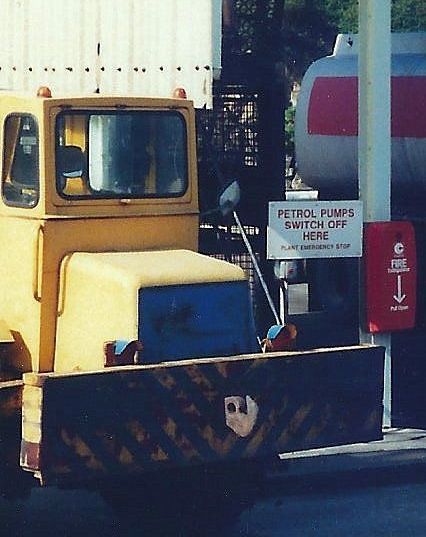