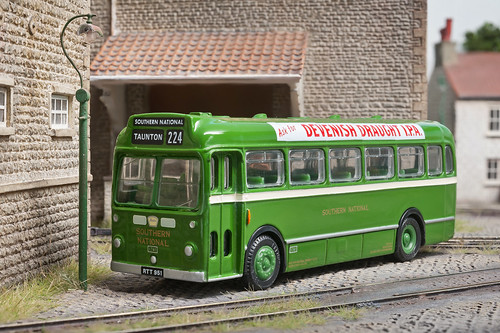 At RAILEX over the weekend an hour or so before the show ended I finally got around to having my tour of inspection and came across this rather nice diecast EFE Bristol L.S in Southern National green livery on the hosting club's secondhand stall. The clincher being the Devenish Draught advert which sadly now promotes that long gone well loved Weymouth brewery.

All starry eyed, I donned that dirty gabardine raincoat, greasy hair with comb-over, NHS specs, National Express holdall from 1970, an old bus timetable entwined in with my snotty hanky and broke into the Â£4 pocket money that mother had some kindly given to me along with corned beef and salad cream sandwiches - job done, and here it is posed on the nearest I have to a street scene on my various trainsets.

In the latter half of the 1970's I lived in Dorset and recall the school bus was occasionally one of these, it was very clapped out and would often stall going up a 1 in 6 hill which was part of its windy route through the hills. The stalling would usually happen during an uphill gear change, and on one occasional we all had to disembark to make the coach lighter in an attempt to help the driving get it going into second gear. With the bus finally going at walking pace we all then got back on. Of course in today's world such would almost certainly involve death of nearly all involved, sacking of the driver and a very expensive televised inquest. The two surviving school children would then go in Britain's Got Talent or the X-factor and win with a sympathy vote. The school bus route would then be disbanded because it would be deemed far to dangerous and road deaths in the area would rocket due to 4 x 4 accidents from drivers on the school run.

It's a very pretty bus though I'm sure you'll agree, and perfect for my Somerset based layouts. In due course it might become a superdetail/Workbench project, but not today because again the weather is far too nice, so a day in the garden beckons.