The mast fits tightly in a drilled out hole in the deck, but I thought I would use some .3mm nickel-silver wire for some of the rigging to strengthen it. I drilled the mast and the hull casting for the wire ends to locate in. The main derrick has a bent wire coming out one end that is suppose to fit in holes in fittings on the mast. These fitting had not cast very well, so I drilled the mast just below the fittings and glued in U-shaped wire to securely hold the derrick. The angle of the derrick could be set to almost vertical, or down to horizontal, when its end could sit in a cradle located just ahead of the funnel. However, very few photos showed the derrick in this horizontal position, so I left mine at the angle as supplied in the kit.

For the remaining rigging I used EZ Line, a latex thread that can stretch to about 3 times its normal length and will spring back to normal, making it resistant to accidental damage. It is fixed with drops of superglue - I did not fancy doing proper knots in this scale.

The rigging for the mast consists a single, wire from the point of the prow to the top of the mast, and three lines each side to near the top, with cross ropes to form ladders. On the model, the centre line of the three was formed from wire while the other two were EZ Line. I have not added the cross ropes. I noticed on photos that a navigation lamp is sometimes hung half way up the forward line. 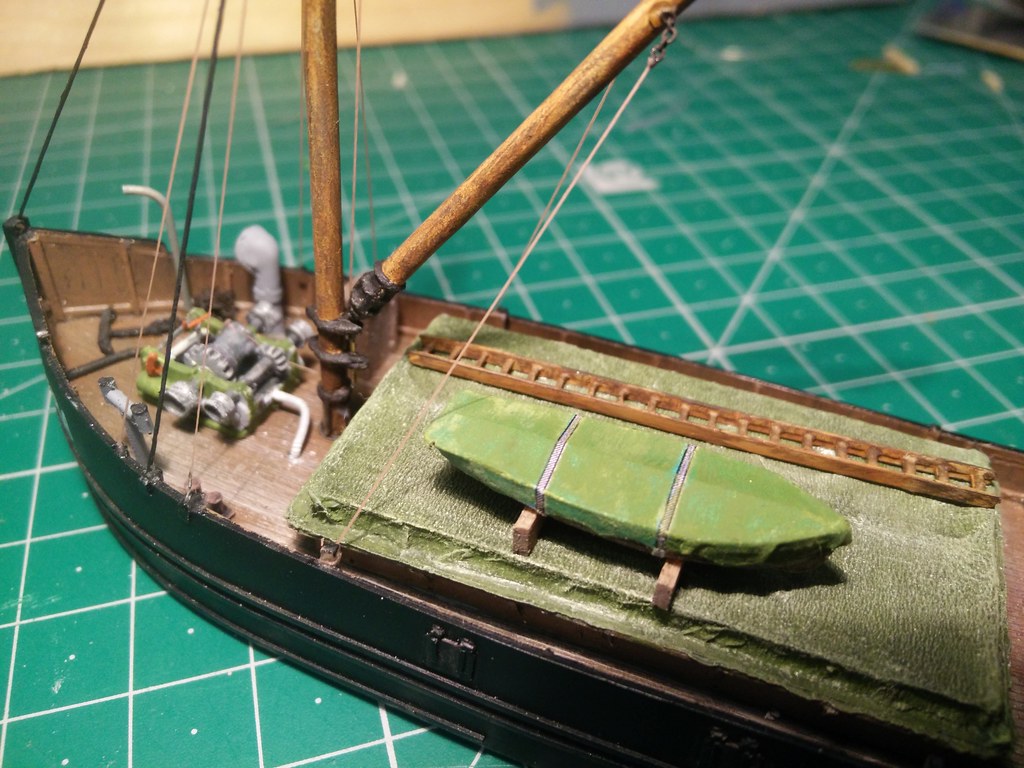 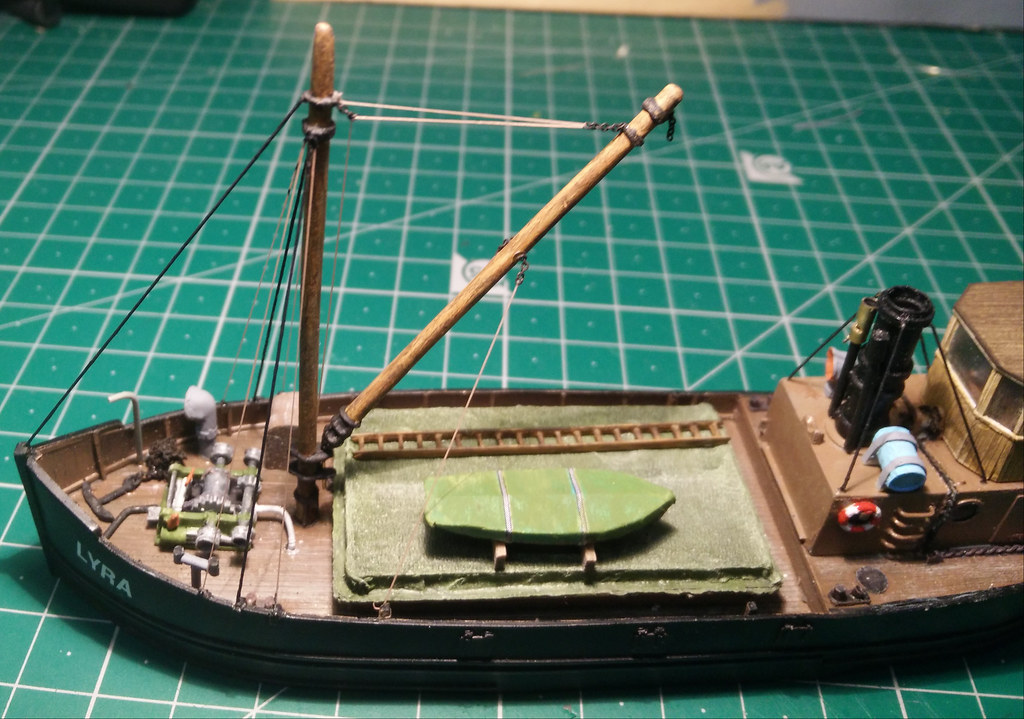 EZ Line ropes were used for the derrick functions. It could be raised or lowered, swung from side to side and a hook or chains used to lift loads. All these ropes went through pulleys attached to metal straps around the derrick with short lengths of chain. I had some fine brass chain from Langley Models that I blackened with Caseys Blue and fixed to the derrick with superglue. The EZ Line was then threaded through the last link of the free end of the chain. I did not bother with pulleys. A hook was made from brass wire which was then flattened in a vice. A blob of White Tac formed the weight above the hook. the free ends from the derrick side ropes, used for swinging the derrick from side to side, are simply tied to the side of the hull, and presumably pulled by man-power only. the ropes for raising the derrick and lifting the hook disappear into the winch.

An extra derrick, for lifting the anchor aboard, is just a length of brass rod, bent over. The Langley Models anchor, and pile of chain are stowed untidily in the prow. 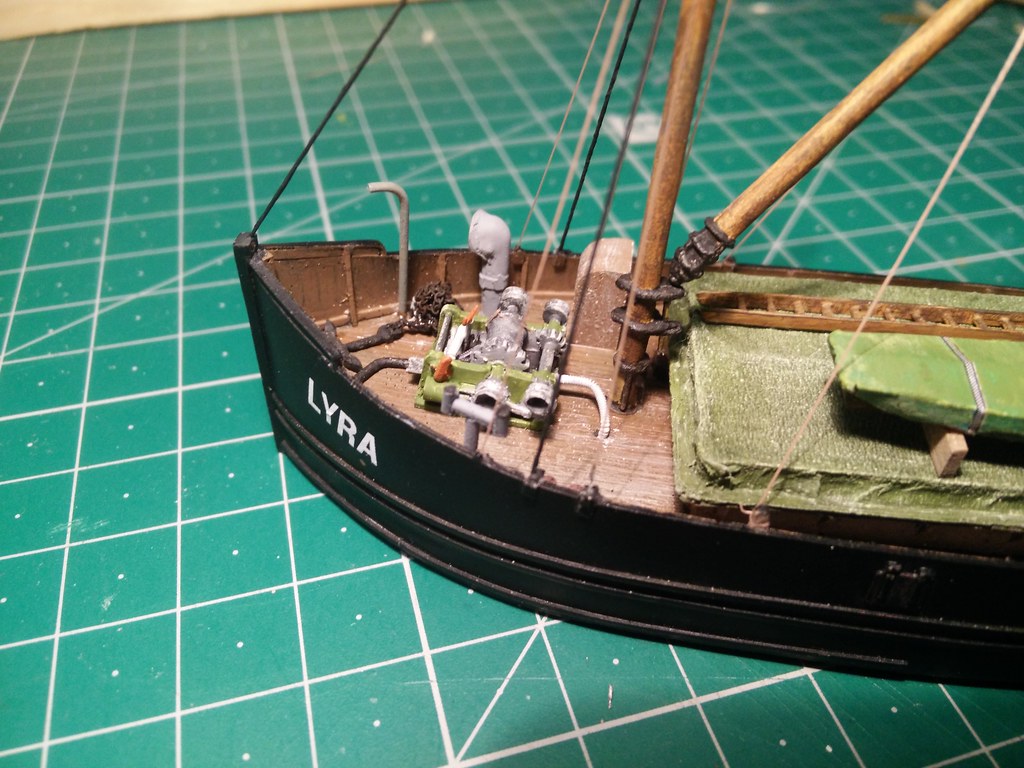 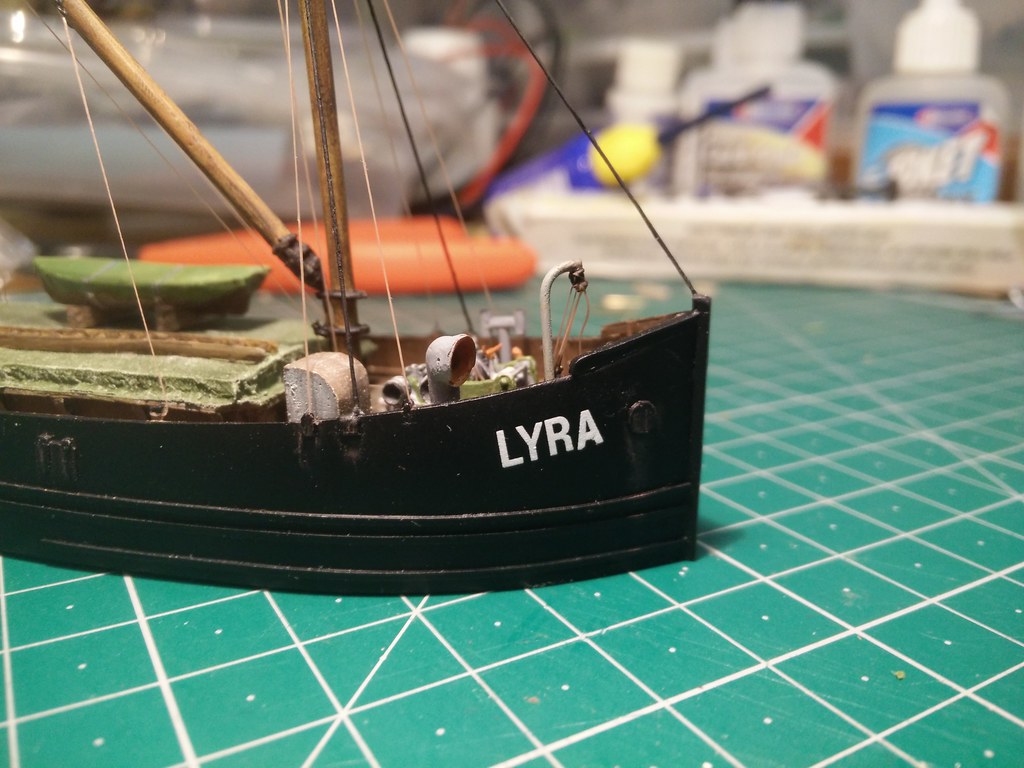 The row boat supplied does not have any interior detail, and could be stowed inverted, but photo showed them stowed, sitting on wooden beams with a cover. The cover was formed from paper. The ladder was also stowed on top of the hold cover.

A finishing touch are the railings around the stern of the vessel. This was cut from a very fine etch of N scale roll top fencing. 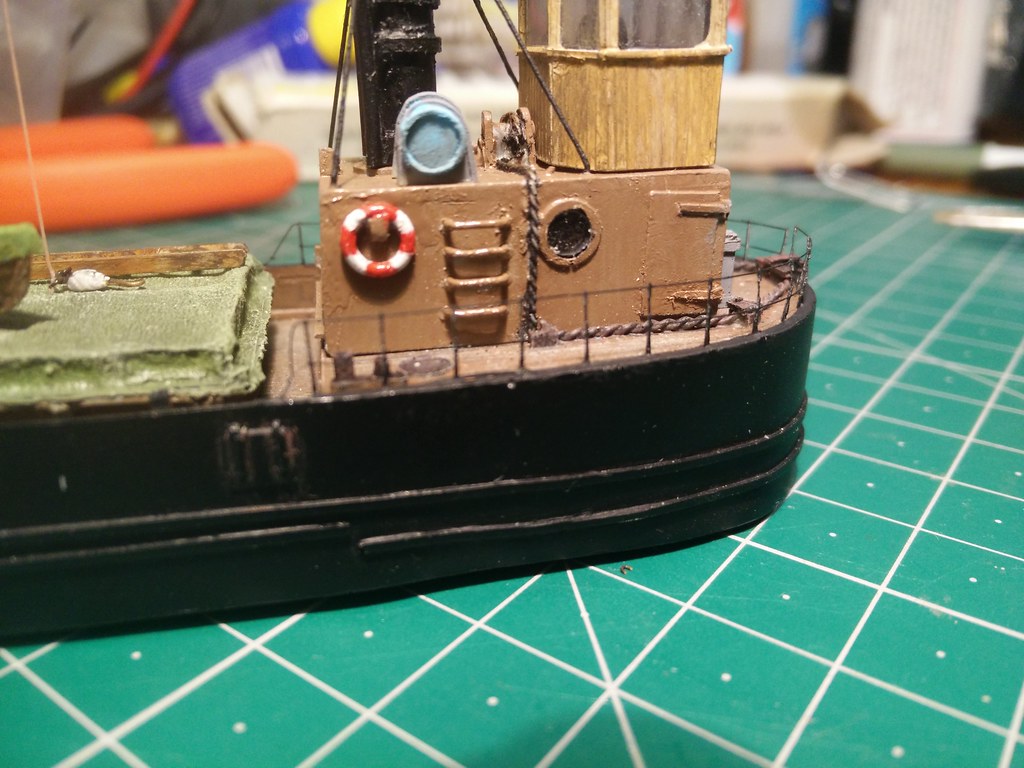 I just need to find a couple of suitable crew members to complete the scene.