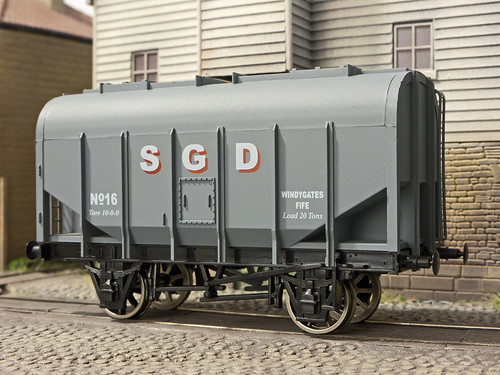 Currently on the workbench; a Dapol grain wagon. Breweries and maltsters need barley to turn into malt, so at least a couple of grain wagons will not look out of place on Brewhouse Quay and as part of a good train for my other layouts.

At Model Rail Live last weekend, the fine folk at Kernow Model Rail Centre who had a stand at the show with all sorts of goodies, also had a bargain bucket to suit cheapskates like me who like to pick up models to have a fettle with. In there was the above - perfect!

Research begun with a peruse of Paul Bartett's excellent wagon website, with the discovery of this rather useful page of unfitted grain wagons http://paulbartlett....c0988#h141fb379

Comparing photographs on Paul's website, this older model has quite a few errors, the main one being that the underframe is completely wrong, especially when it comes to the brakes and associated gubbins. Some brass wire, strip plastic card, the spares box and a little time should be able to address this. The long vertical strips that run from the roof to the chassis do not bend in nearly enough where they join with the chassis, but they will have to stay, trying to rebuild that aspect would be a major headache. There are probably all sort of other faults, but until I complete my adenoidal voice training evening classes I'll have to pass on those for the time being.

Despite its failings, this wagon does 'look like' a BR grain wagon, and the mouldings are nice and crisp so it should be possible to create something that 'captures the character' - so will be good enough for what I want it for - given the time I have to put into this project.