Everyone knows how the “standard” GWR cattle vans looked, but I’ve always fancied the earlier W2 vans with outside frames. So I dug out an ABS 4mm kit and brought it with me on the family holiday. These were "medium" sized cattle vans, with the option of adding a partition and thereby making them "small" if the customer so required. I've always wondered why this was worth the trouble, as the difference in space seems minimal ! 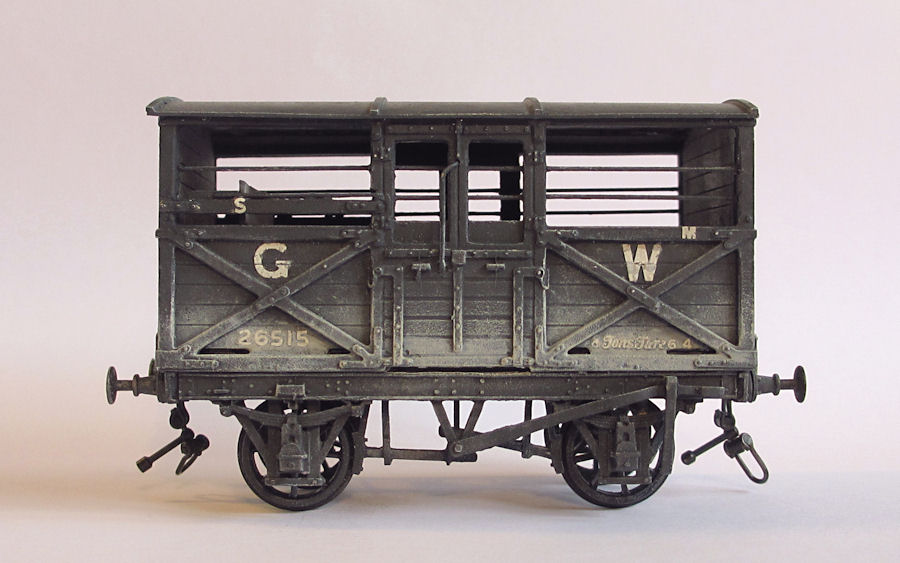 I decided to build the kit as supplied, which is in the post-1905 condition with oil axleboxes, an updated locking mechanism for the doors, and the Wright-Marillier partition locking bar. 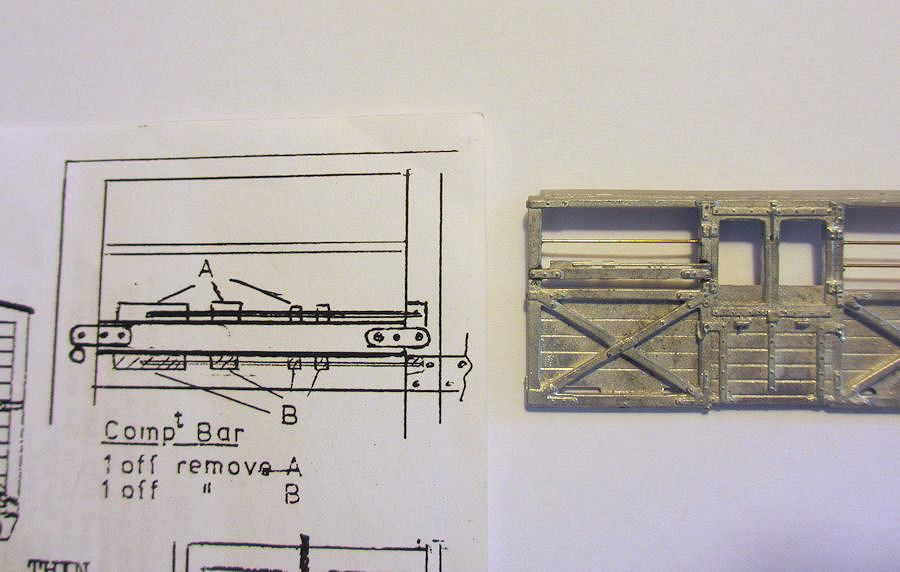 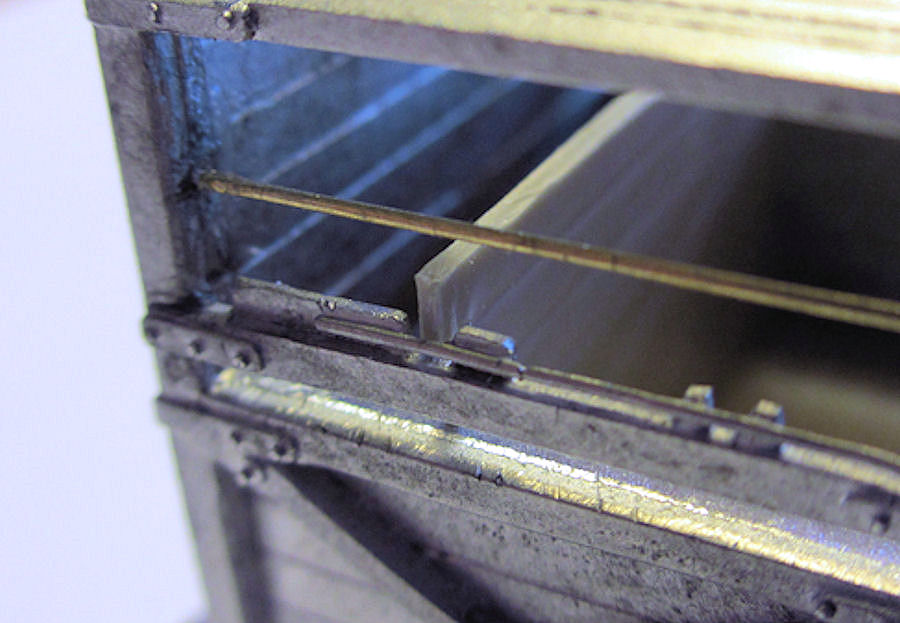 It seems that in the early 1900s the GWR was having problems with farmers who paid for only part of a cattle wagon, and then moved the partition to increase the space when noone was looking. So in 1903 Messieurs Wright and Marillier of the GWR’s Wagon & Carriage department invented a locking bar that would help prevent this. Not quite Nobel prize stuff, I suppose, but a good example of practical engineering for everyday railway operation. 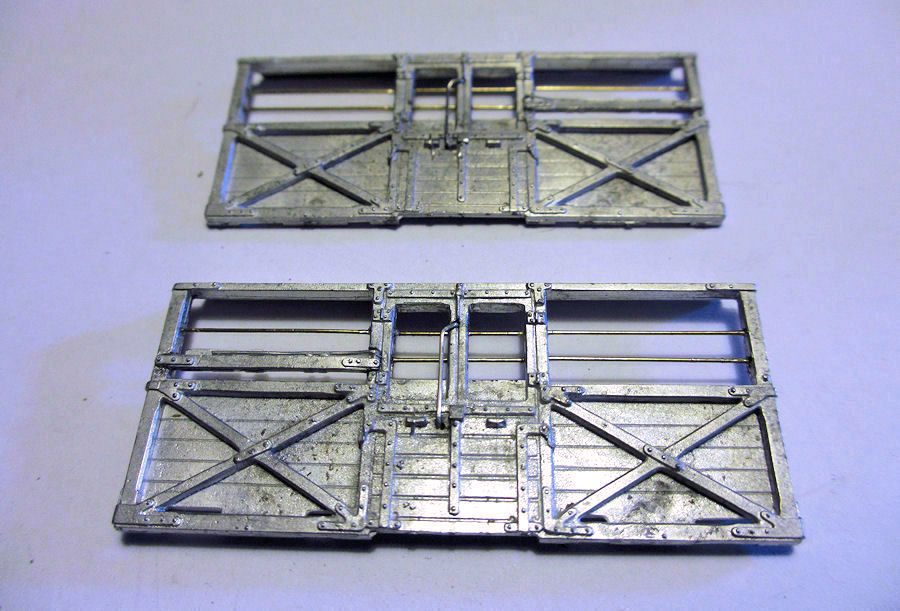 The sides require a bit of preparation. Apart from fitting the locking bar, a door latch must be fashioned from wire and the main bars fitted. 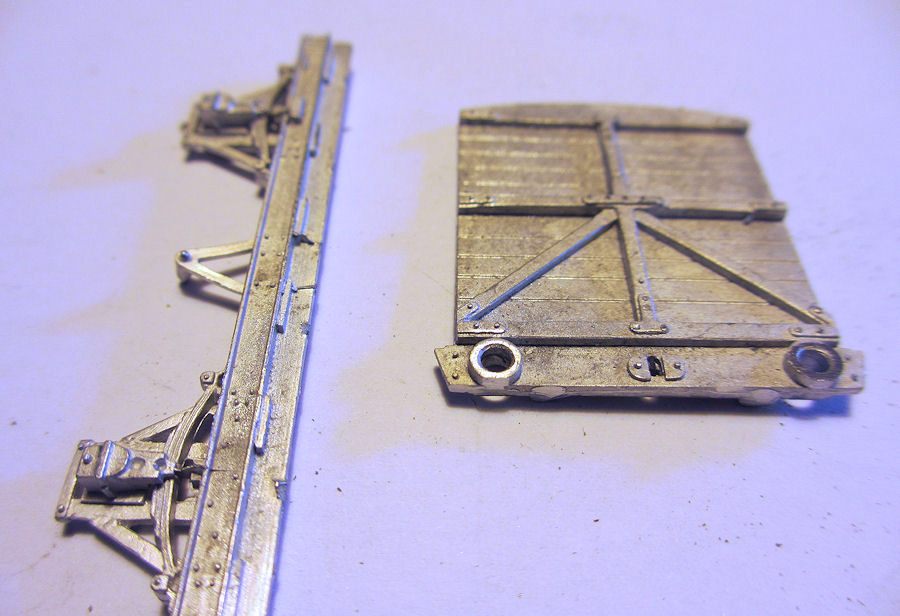 The W2s were built with “bulb” section solebars (where the upper lip is wider than the lower one), and an early distinctive type of round buffer housing. Those lugs on the casting above the solebar caused me a lot of headscratching. They don't seem to serve a purpose and get in the way of the assembly. In the end I simply removed them. I hope I haven't missed some vital point! 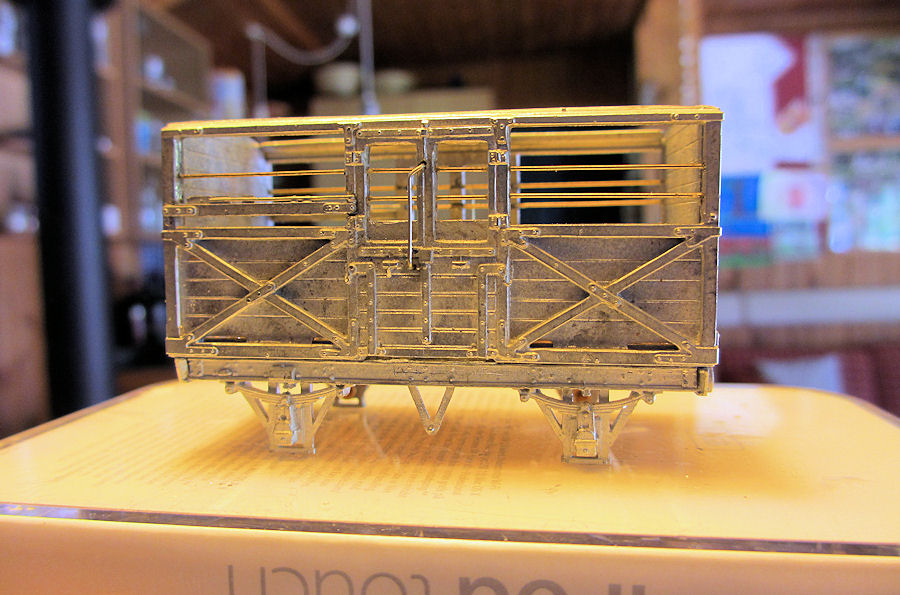 Poor man's brass. I've finally realized why I get on better with whitemetal and plastic than with brass. They are much more forgiving materials, eg I can file and tweak and fill in to correct all my mistakes! 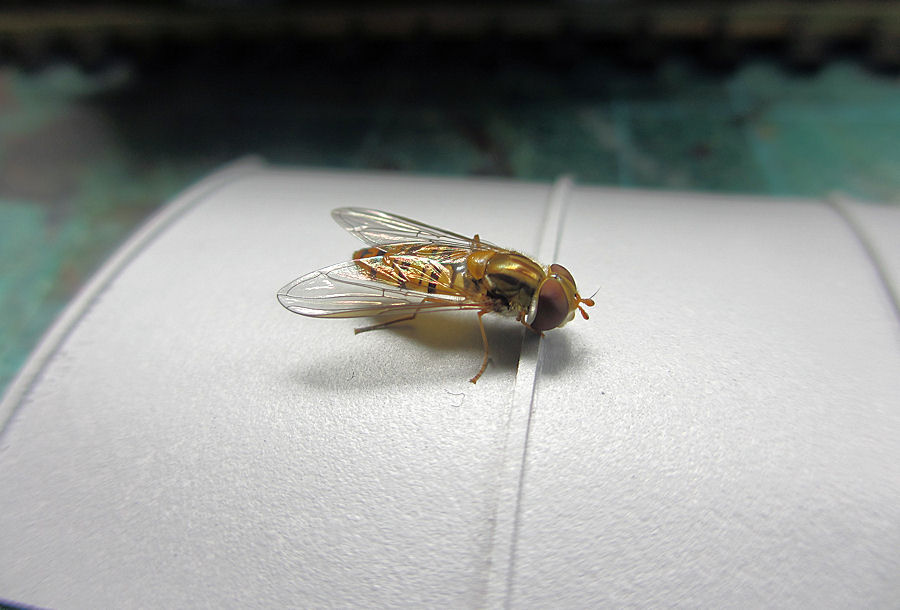 Modelling in the wilds of Denmark. A fly of the genus Wotsit inspects the roof bands. Actually it may have a point: I think the bands should have been a tad flatter and wider. 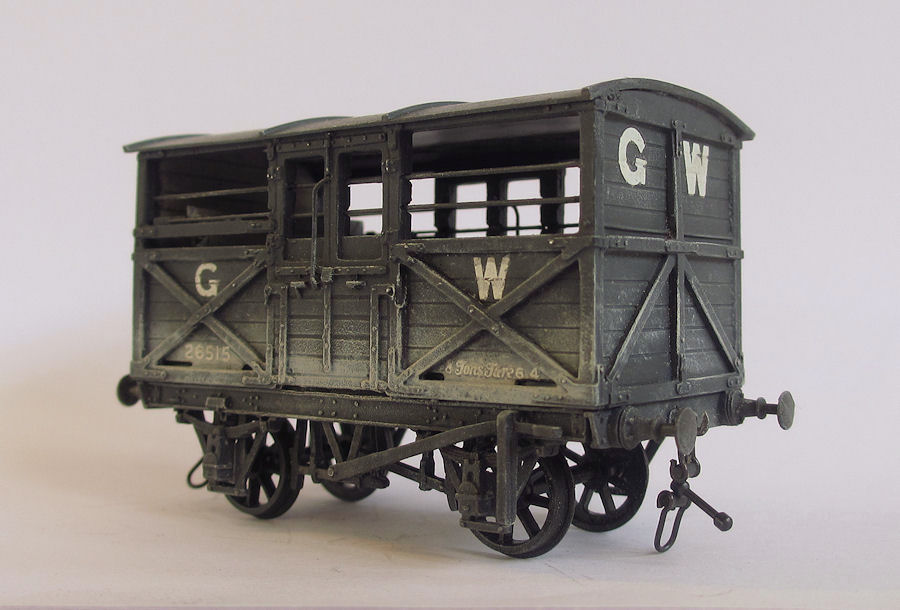 Standard grey and a bit of lime wash. I forgot to add the small "M" and "S" to the livery (now corrected, see the first photo). I know that the lime wash was often more pronounced in reality, but I find it can look a bit odd in 4mm scale. So I prefer this understated look. I haven’t finished the lettering on the ends as I am not sure how it should be. The photo in "GWR Goods Wagons" (Atkins et al) shows an experimental livery on the ends which was not carried forward. The kit instructions indicate the “GW” as seen here, but also with tonnes and tare in italics on the left hand side. But I thought that the standard end livery should be “GW” , running number and “Medium”? 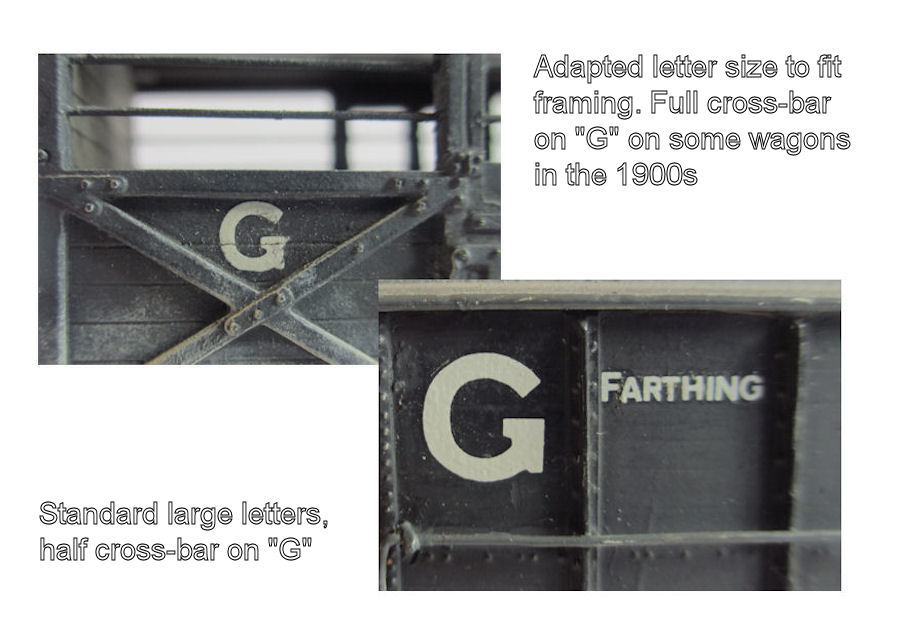 When the GWR introduced the large "GW" on goods stock in 1904, they ran into problems with the outside framed vans. There simply wasn't enough room between the frames. The solution was to use smaller, non-standard letters. I did the same. Photos from the early 1900s also show that on some wagons, the cross-bar on the “G” differed from the later standard style. The HMRS transfers have the later style (bottom right), so I modified them with a lick of paint (top left). 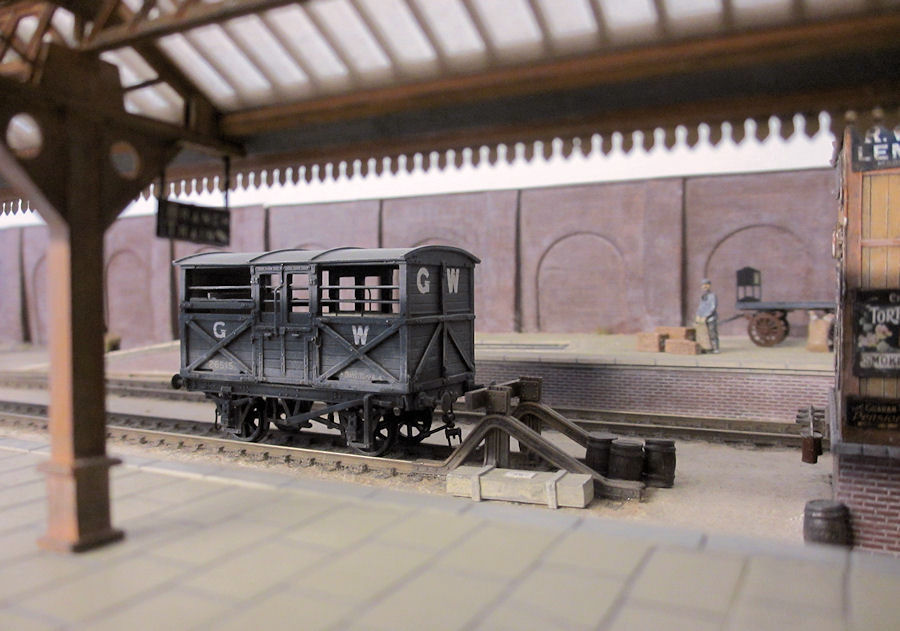 The W2 in the bay siding. Surprisingly, the photo in Atkins et al shows it with screw-couplings, so I have added an (overscale) set of these until I work out if that was standard. 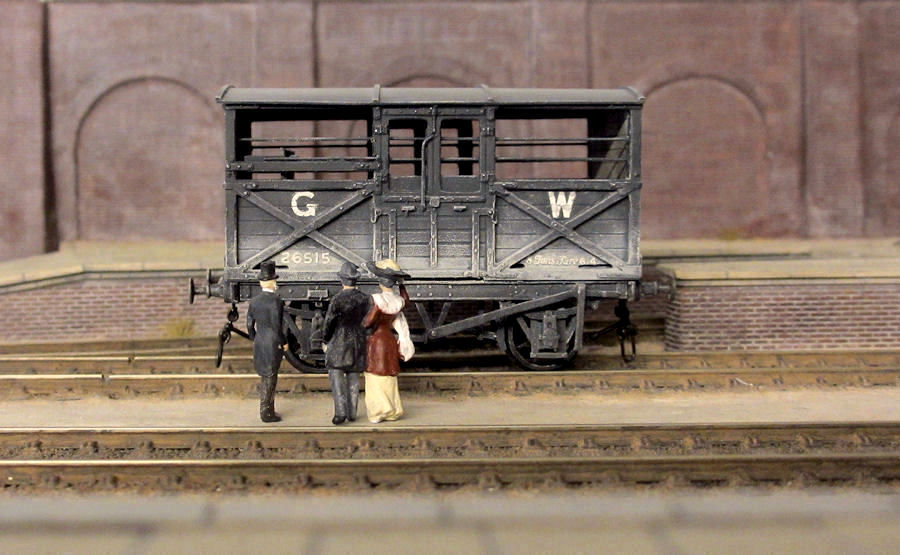