I've been testing the trackplan for “The sidings”, and got a bit carried away...

Jokes aside, there is a more serious side to this: As previously explained, the layout is inspired by the trackplan at the back of Gloucester Old Yard. This included the very short so-called “biscuit siding” which served a private warehouse through a kick-back arrangement.

In GWRJ No. 45 (p262), shunter Hayden Jones explains how the biscuit siding was operated:

“Wagons were gravitated in and out. When we put a van in, it was pushed right on to the stops and the brakes put hard on. The pilot then stood back while we unlocked the points, released the brake and allowed the wagon to roll into the siding. When it was ready to come out, we collected it with our engine.”

Photos of the siding do not show any major gradient, and I'm a bit confused as to how gravitation could be done both "in an out". I wonder if the quote refers to the use of pinch bars? Alternatively, there may have been a light gradient one way, and use of horses and (later) perhaps a powered capstan the other way.

In any case, my initial reaction was to disregard these practices on my layout (which is not a direct copy of Gloucester anyway) and simply shunt the siding with a loco. I have made provision for this in the track plan and may still end up with that solution. Still, I couldn’t help toying with the idea of some form of non-loco wagon propulsion in that particular siding. 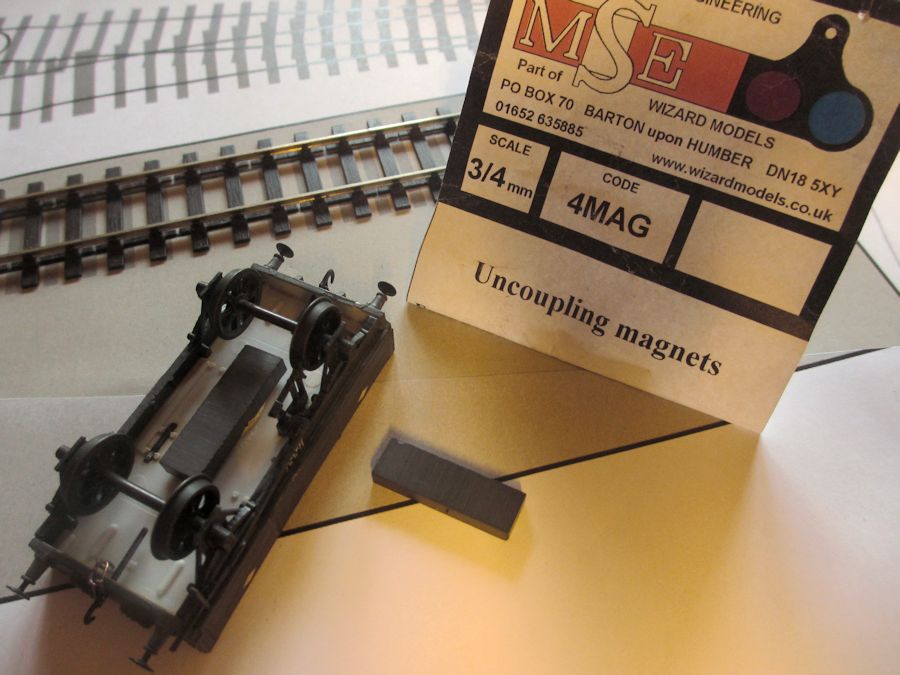 The video above demonstrates my most succesful experiment so far. There’s a magnet stuck to the underside of the wagon and another in my hand underneath the baseboard. I thought I’d test it just to give it a try. The magnets are MSE and work quite well through my foamboard baseboard, and yet I have my doubts: The video shows manual operation where starts and stops can be done fairly gently. However, to make it practically feasible some sort of permanent, mechanically sliding magnet would be needed, and in such an arrangement it would be tricky to avoid sudden starts and stops, I think.

So what are the alternatives? High Level do a mechanism for powering individual wagons, which looks interesting. It is illustrated in operation on the rather superb Leicester South seen below (from ca 6.17). Does anyone else have any experiences with this or other means of non-loco wagon propulsion?